#ANCdecides2017: Lindiwe Sisulu and David Mabuza to face off for No 2 position 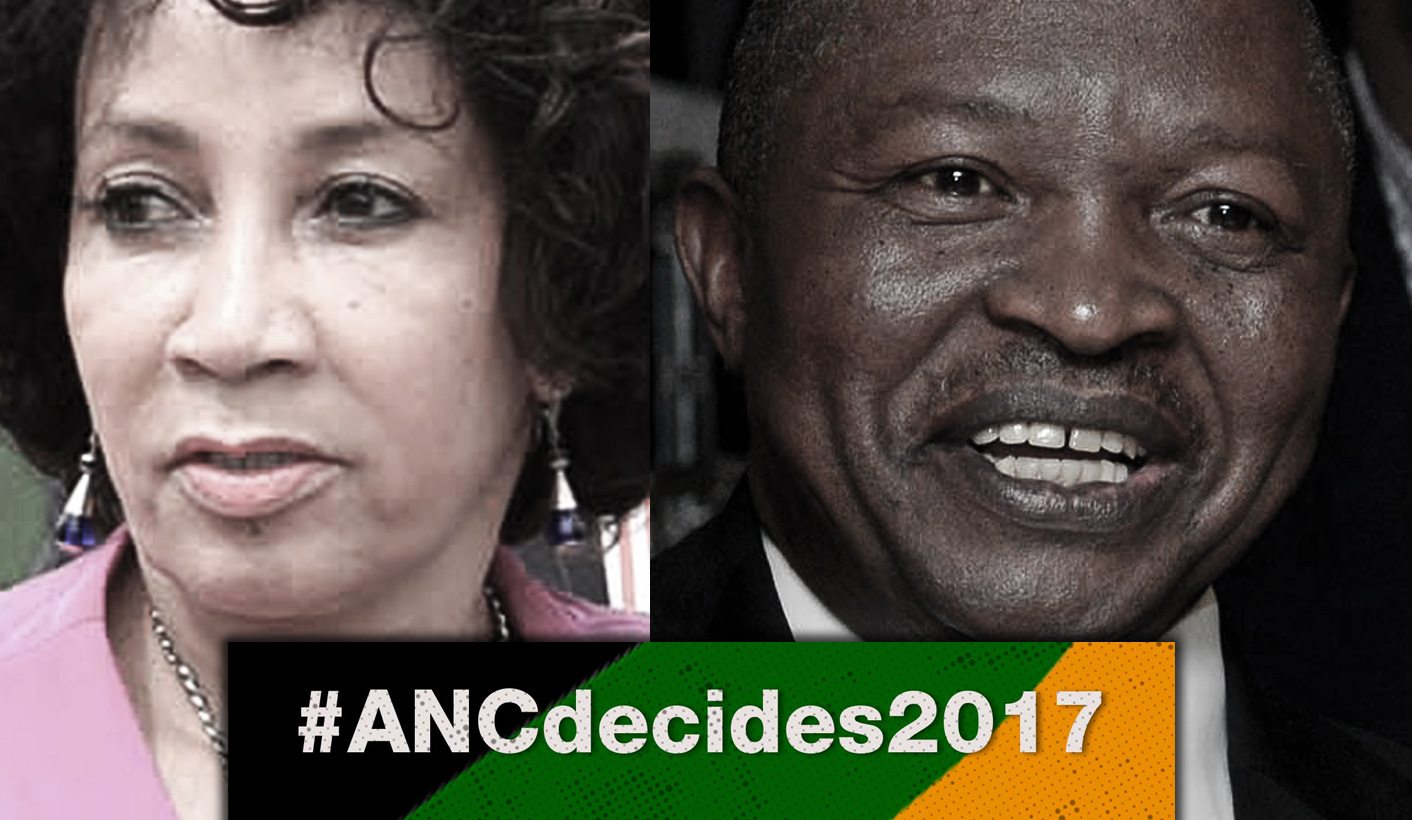 Better late than never, ANC presidential candidates have been confirming their running mates with only a day to go before the ANC’s 54th national conference in Johannesburg. Presidential hopeful Lindiwe Sisulu has at last agreed to be second to Deputy President Cyril Ramaphosa. Fellow presidential candidate Nkosazana Dlamini Zuma’s campaigners claim ANC Mpumalanga chairperson David Mabuza has told branch delegates he will be her number two, but it’s not entirely clear that he actually did. One thing is certain, however – by Sunday it should all be over. By CARIEN DU PLESSIS.

Over the last few months, there’s been much criticism aimed at Deputy President Cyril Ramaphosa and his slate. He got plenty of flack, first for announcing a slate at all (it’s un-ANC and unnecessary, and might alienate future campaigners), second for the frequent chopping and changing, and third for the gender issue – he had to have a woman in the presidency to counter his opponent ANC MP Nkosazana Dlamini Zuma’s gender ticket.

The slate he announced a few weeks ago had science and technology minister Naledi Pandor in second position. Human settlements minister Lindiwe Sisulu was always a favourite to run as his deputy, but she played hardball, making it clear initially that she would settle for nothing less than the presidency. She also aimed to leave it to the branches.

Now the branches have spoken, saying they prefer Sisulu to Pandor, which led Sisulu to tweet:

“When people call for you, as a leader you answer, without conditions. My desire to serve has no condition, I will serve where I am called to serve. Let’s recapture the right path – It’s a MUST!”

Messages distributed among Ramaphosa supporters on Thursday claimed Pandor had agreed to step aside.

They’ve noted the support from civil society, business, organised labour, veterans of the ANC and military veterans – and, most important, from the branches.

“As disciplined members of the ANC, Comrades Cyril Ramaphosa and Lindiwe Sisulu have agreed to work together to ensure that the wishes of the branches of the ANC are realised” at the conference, they said. “The candidates have recommitted themselves to ensure that the will of the branches is carried through during discussion of policy matters and the election of the officials.”

On Dlamini Zuma’s side, ANC Mpumalanga chair and premier David Mabuza has featured as her deputy president from the beginning, but he’s been playing his cards close to his chest as to whom he supported, with most branches in his province simply writing “unity” on their nomination forms.

Late on Thursday night Dlamini Zuma lobbyists claimed in a WhatsApp message that Mabuza “just finished his address to delegates of Ehlanzeni Region and he informed them explicitly that he is standing to contest the Deputy President position under NDZ campaign”. Some delegates from other regions in this province, however, said they were not informed about his plans. Mabuza’s support could make or break either campaign as the numbers are very close.

On the draft programme, an hour on Saturday was set aside, from 15.30, for the nomination of four of the top six positions – president, chairperson, secretary-general and treasurer-general.

The initial idea was to elect the deputies once these four positions had been announced in order to give candidates who didn’t make it in the first round a chance to run as deputies.

The idea, first mentioned by Mantashe, was to encourage inclusion, but it was contentious, and it was shot down at the final NEC meeting before the conference on Thursday.

This means, instead of possibly including candidates from both sides in the top leadership, the two sides will go head-to-head in a all-or-nothing battle, as they had since 2007.

It also means the idea proposed by Zuma at the policy conference – that the losing presidential candidate should become the deputy – is unlikely to fly.

Of course conference delegates will be asked to agree on voting rules and procedures first, and if proper agreement between provinces on this hadn’t been lobbied beforehand, things could get pretty late on Saturday.

Mantashe on Thursday said the new ANC president would be known by Sunday.

Once the top six are elected, the additional members to the national executive committee – it’s 80 at present, but there’s a possibility that these might be reduced – will be elected.

On Friday a list of 80 names that the branches in the Ramaphosa camp wanted to see on the NEC did the rounds. Despite Ramaphosa having repeatedly pronounced against corruption, not all the candidates on his list are squeaky clean. None of them has, however, been implicated in State Capture or dealings with the Gupta family.

Top is deputy minister of agriculture and former police chief Bheki Cele, who was suspended in 2012 after two public protector reports implicated him in the abuse of power in securing office space for the police; former KwaZulu-Natal MECs Mike Mabuyakhulu and Peggy Nkonyeni, who were implicated in corruption but eventually had charges dropped; and Tony Yengeni, who was jailed for fraud and, in March, convicted of drunk driving.

Should Ramaphosa be serious about tackling corruption, he would have to be careful about who he accepts on his slate – but this isn’t always under his control, as branches are set to nominate and vote for the 80 or so additional members. Some of the additional members on his lift also appear to come from among Dlamini Zuma supporters.

Nominations are set to start on Saturday afternoon, and voting would commence even as delegates continue with discussions in commissions. DM