ANC Leadership Race: Cyril Ramaphosa – five years after his return, the prodigal son might finally get to be king 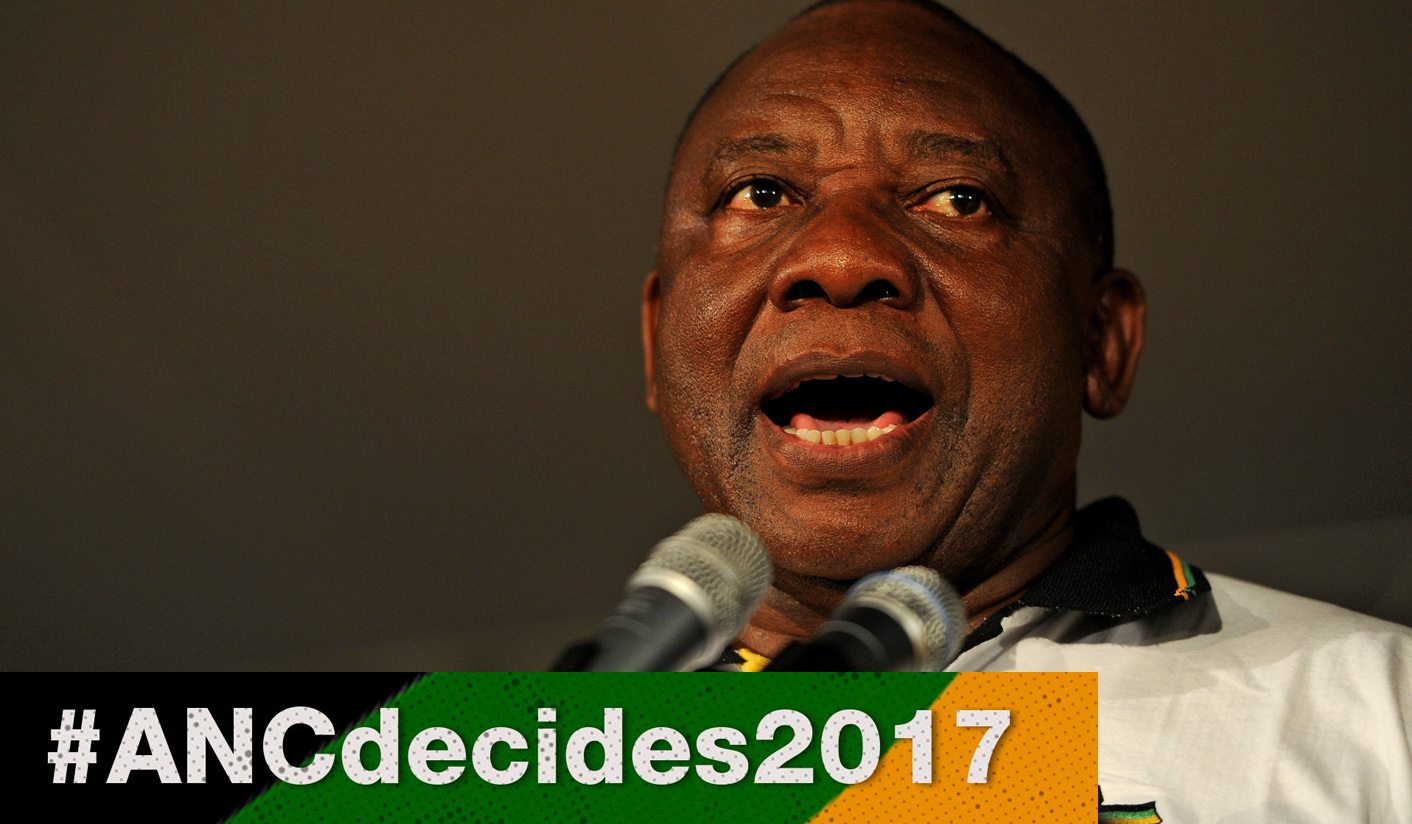 Cyril Ramaphosa has remarkably avoided President Jacob Zuma’s scandals since he became ANC deputy president in 2012. He is the favourite to take leadership at the ANC’s national elective conference this weekend, but his history may cast doubts in some eyes about his ability to pull South Africa out of its current moral and economical crisis. By GREG NICOLSON.

Cyril Ramaphosa doesn’t deliver historical moments anymore. He was the man who famously brought apartheid economy to its knees in the 80s, who was in the very centre of Codesa negotiations and who later had a big hand in the drafting of SA’s beloved constitution. These days he works mostly behind the scenes, with his comrades or business partners, using those famous negotiating skills in private settings, while exhibiting calculated diplomacy in public.

He didn’t announce that he would return to politics in 2012 or campaign for the position of deputy president. He dutifully expelled Julius Malema from the party and later agreed to be President Jacob Zuma’s ace card at the ANC’s Mangaung elections.

In 2013, the New York Times asked whether Ramaphosa was the “best leader South Africa has not yet had”.

We may soon find out.

Ramaphosa’s 2012 appointment saw the return of a political prince, anointed by Nelson Mandela himself, who was never given the chance to lead. But, much like the negotiations Ramaphosa led to secure democracy, for many observers, his Mangaung deal with Zuma have resulted in his integrity sacrifice on the altar of the lifelong ambition to become the next president of the African National Congress.

Since his election as ANC deputy president in 2012, Ramaphosa’s best successes were defined by who he was not. He was not Jacob Zuma. He has not been linked to the Gupta family and the corruption allegations defining Zuma’s administration never touched him. He is by no means immune from scandal, but handles difficult situations so deftly that he leaves his enemies and critics with little room to manoeuvre.

Ramaphosa was a lawyer before he made his name as a founder of the National Union of Mineworkers (NUM), which grew into the country’s biggest trade union. He led NUM’s 1987 mineworkers’ strike, which ultimately failed but sent a resounding message. He tested South Africa’s mining magnates at the negotiating table.

Ramaphosa was successful as a trade unionist, politician and businessman, but owes much of his public profile to former president Nelson Mandela and the ANC. He was by Mandela’s side as he was released from prison and soon became secretary-general of the ANC. He enchanted the nation as he led the ANC in the negotiations to democracy and then went on to help write the Constitution.

Mandela believed Ramaphosa should succeed him. They were close. Ramaphosa had the leadership skills and he was Venda and not Xhosa, which was important given the latter nation’s domination of key party positions.

But Ramaphosa was still young in the 1990s. His comrades were split between those who fought apartheid in exile versus those who had remained in SA. Oliver Tambo’s protégé, Thabo Mbeki, was chosen as Mandela’s deputy, dealing a deadly blow to Ramaphosa’s ambitions to become president, giving birth to the fable of what could have been.

“It was my choice,” Ray Hartley quoted Ramaphosa in his book Ramaphosa: The Man Who Would Be King. “The one thing which I can say was that soon after the constitution-making process I wanted to revert back into the party and what piqued me was the continuous stories that now I was reverting back into the party to begin building my profile – building myself to have a go at challenging Thabo Mbeki.”

Ramaphosa lost the deputy president race to Mbeki and wanted to leave public politics. Mandela gave his blessing to deploy him as a pioneer in black empowerment (see announcement in video clip below). Despite a faltering start, Ramaphosa is now worth billions, one of the richest men on the continent.

He was smart with his investments and proved a favourable empowerment partner as white-dominated corporates believed he had access to the highest political connections. He maintains he believes in building black businesses. It was Ramaphosa who led an inquiry into black economic empowerment, which led to the codes currently in place.

After the Mangaung conference, Ranjeni Munusamy wrote in Daily Maverick about the deal Ramaphosa had struck:

“But his challenge now will be to inspire confidence and repair the tattered image of the ANC while appearing not to pose too much of a threat to Zuma. He also needs to be able to stay out of factional battles which are tearing the ANC apart. It will be a delicate egg dance which could earn him the biggest prize of all, the presidency of South Africa.”

In 2017, the #GuptaLeaks have finally revealed the extent to which the government and its institutions are beholden to the interests of the Gupta family and other private entities. Remarkably, Ramaphosa has not once been implicated.

He found his platform.

That doesn’t mean he has always excelled or stood up to corruption. The deputy president was tasked with sorting out some of government’s most complicated crises. Internationally, he was made responsible for Lesotho and South Sudan. Locally, he was told to fix South African Airways, the SA Post Office and Eskom. He struggled on each task, but, especially concerning the SoEs, his mission was thwarted by Zuma’s interests.

ANC leaders and alliance partners critical of Zuma have said the president’s second ANC term was the real beginning of State Capture. That’s when Ramaphosa became deputy president. He has defended his lack of action and while campaigning called for strong action to be taken against those implicated in corruption related to the Guptas as well as those in the private sector, such as the Steinhoff executives.

The election race between Dlamini Zuma and Ramaphosa has been ugly. The deputy president has been accused of assaulting his romantic partners, which his ex-wife denied, and paying young women for sex. Ramaphosa got in front of the latter story and admitted to an extra-marital affair, but denied he was a blesser.

Dlamini Zuma’s supporters call Ramaphosa a two-faced capitalist, claiming he will sell South Africa to the highest bidder, but they’ve, inexplicably, failed to capitalise on his biggest downfall – Marikana. Ramaphosa was found not to have been directly implicated in the massacre, which saw 44 people die in a week during the August 2012 Lonmin strike.

However, he failed in his duties as a non-executive director and chairman of the company’s transformation committee. Years before the massacre, Lonmin said it would build 5,500 houses for workers but only built a few show pieces. Ramaphosa slept on the job. Housing was cited in the Marikana commission of inquiry report as a key reason why the miners went on strike.

When the Marikana strike began Ramaphosa called for police to intervene rather than using his experience as a union leader and negotiator to find a peaceful solution. The ANC has only been defensive on issues related to Marikana, and Ramaphosa was elected deputy president in the months after the massacre.

Photo: The Farlam Commission report released on 25 June 2015 found that Deputy President Cyril Ramaphosa could not be held accountable for the deaths of the 34 miners. EPA/KIM LUDBROOK

Ramaphosa’s ANC presidential campaign has, in some quarters, been viewed with suspicion. His success in business leads to obvious questions about whether he will try to benefit big businessmen, with whom he clearly now identifies, instead of promoting redistributive policies.

The deputy president has promoted a 10-point plan for a “new deal” in South Africa. He has explained that his deal is not ANC policy but a plan to find a new consensus among citizens, government and business to support the National Development Plan. It’s a rosy ambition but one Ramaphosa could pull off, considering his favour in the business sector.

The deputy president came out on top after the branch nominations were announced before the ANC elections, but branch nominations don’t necessarily translate into votes. Delegates will continue to lobby each other until they head to the ballot. Ramaphosa is close to being elected but the race remains too tight to call.

Ramaphosa, if elected, might transform the country, but voters are moving beyond the ANC. Ramaphosa was Mandela’s chosen successor, when the ANC was guaranteed to win elections. On current trends, the party may lose key provinces and even national government in 2019.

Ramaphosa might be the best candidate to reform the ANC and, if need be, negotiate potential coalitions, but he may have missed his moment. In many aspects, ANC’s brand is in tatters, and the country’s economy is reeeling. He is tainted by Zuma’s downfall, and his links to big business do not help. Even if he wins, he will inherit a party that has lost its way and government that will take years to repair.

And yet, perhaps unfortunately for South Africa, Ramaphosa is still the country’s better chance. DM