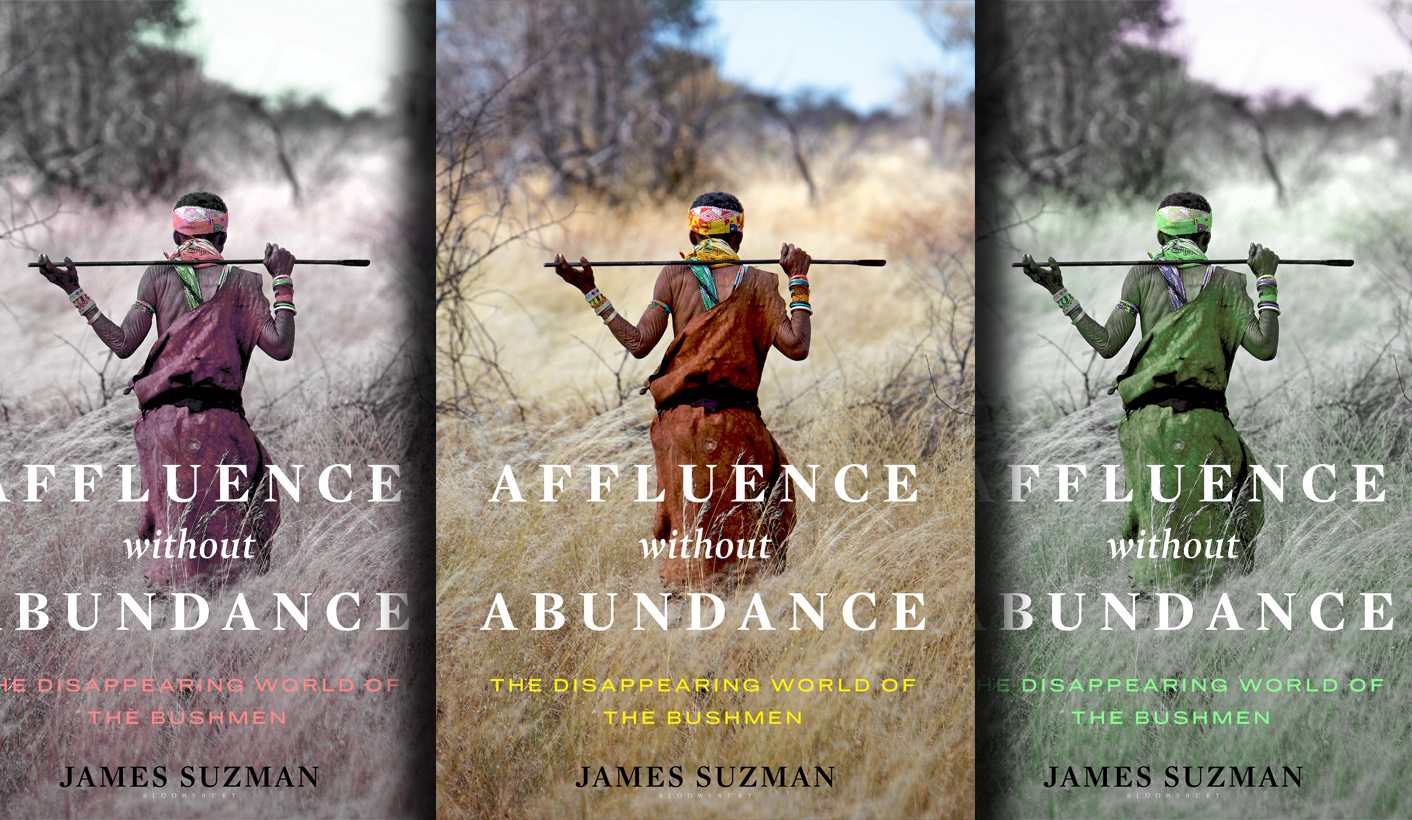 New genomic and archaeological evidence tells us that southern Africa’s first people were by many measures the most successful and enduring society in all human history. Understanding how and why they were so successful offers novel insights into how we might resolve some of the most pressing social, economic and environmental challenges we face today. By JAMES SUZMAN.

In 1941, South Africa’s Minister for Native Affairs Denys Reitz pronounced in a parliamentary debate on the future of South Africa’s remnant San population that, “It would be a biological crime if we allowed such a peculiar race to die out, because it is a race which looks more like a baboon than a baboon itself does. . . We look upon them as part of the fauna of the country.”

Reitz’s view may seem as archaic as it is offensive to many of us now. Yet the underlying sentiment will be familiar to many of the hundred thousand or so landless San who forage on the fringes of the mainstream economy in Botswana and Namibia where many of their neighbours, black and white alike, disdain, patronise and pity them as mere “creatures from the bush”.

But while San still have to put up with being crudely stereotyped by others, new archaeological and genomic research taken in tandem with the work of anthropologists and others that who worked with San over the past 50 years shows that far from being “a peculiar race”, southern Africa’s Khoisan were arguably the most successful society in all of human history, and by a considerable margin.

We now know that southern Africa’s human history stretches back far longer than was imagined. Homo sapiens was well established in southern and central Africa from around 200,000 years ago. We also know that around 150,000 years ago the Homo sapiens family tree split. One branch, the Khoisan, remained in southern and central Africa. The other expanded northwards, spreading through Africa, Asia, the Pacific, Europe and eventually to the Americas.

Genomic data indicates that up until 20,000 years ago Khoisan were not only the most technologically advanced people on the planet— having mastered complex bow and arrow making 40,000 years before anyone else— but also that they were the most populous, stable and genetically diverse. This latter point shows that Khoisan did not suffer population bottleneck events such as famines that massively reduced genetic diversity to the same extent as the other restless branches of the human tree.

Equally remarkably, where the arrival of Homo sapiens on other continents over the past 100,000 years corresponded with the demise of between 70% and 90% of their mega-fauna, most of Africa’s megafauna survived despite having by far the largest and most established human population. This is all important because it shows that somehow this environment and the people who lived there stumbled upon a uniquely stable and sustainable dynamic that would never be repeated elsewhere and which in the remoter parts of the Kalahari would endure through to the late 20th century.

If we judge a civilisation’s success by its endurance, stability and sustainability, the Khoisan were by far the most successful civilisation in all of human history, and by a considerable margin. To put this into perspective, by the time the first Homo sapiens set foot in South America, Khoisan had been well established in southern Africa for more than 140,000 years.

While this is important in its own right, what it reveals to us about the present and future will perhaps be the San’s most enduring legacy.

I have documented the San’s often troubling encounter with modernity since 1991. Over this time it has become increasingly clear that understanding how Khoisan were so successful might help us to re-imagine how we might address some of the most pressing social, environmental and economic challenges we face today, including how we adapt to a tech-led future.

The expectation that automata, robots and AI will hollow out the job market is causing no end of anxiety in the industrialised world. Even if we tend not to talk about it in these terms this problem is far more obvious across southern Africa than in the industrialised west. The messy fringes of our urban areas and eye-wateringly stubborn unemployment figures are a testament to the inability of capital and technology-led economic growth to create work.

This was a problem that worried the most influential economist of the 20th century, John Maynard Keynes. In 1930 he predicted that within 100 years, capital growth, technological advancement and improvements in productivity would solve the economic problem and usher in an era in which no one need work more than 15 hours per week. Keynes only saw one serious obstacle to this happening, and that was our propensity to work, a trait he believed was “expressly evolved by nature”.

But Keynes was ultimately an optimist and believed that our species would in a short time recognise our good fortune and embrace a future of abundant leisure.

Keynes was right to worry. We have long since surpassed the technological, productivity and capital thresholds he calculated we would need to meet to achieve his economic utopia. Yet we remain as fixated on work as ever.

This would of course be fine if our preoccupation with work and productivity did not risk cannibalising our future. It would also be fine if our economic models were up to the task of allocating energy and resources more equitably and creating meaningful jobs.

When Keynes was alive it was believed that hunter-gatherers endured lives of unremitting hardship. But research conducted among Ju/’hoansi-San – one of the last largely autonomous groups of hunter-gatherers in southern Africa— in the 1960s revealed that not only did they make a good living from hunting and gathering, but that they were also well nourished and content. Most remarkably, it revealed that the Ju/’hoansi managed this on the basis of only around 15 hours work per week. On the strength of this, anthropologists redubbed hunter-gatherers “the original affluent society”.

This research also revealed that the Ju/’hoansi were “fiercely egalitarian” and how their egalitarianism underwrote their affluence because it ensured that limited resources flowed organically through communities ensuring that even in times of episodic scarcity everyone got more or less enough and that their environment was never overexploited.

This means that Keynes was wrong about another important thing. For Keynes the drive to work was a function of that axiom of modern economics, “problem of scarcity”, which holds that we have infinite desires and limited means and that we work to allocate scarce resources through our societies. But the studies of the Ju/’hoansi showed that for hunter-gatherers like them the problem of scarcity simply did not exist in the way we think of it. Rather, hunter-gatherers were content to work only to meet their needs because they were confident that their environments were sufficiently provident to meet their immediate needs whenever they arose with just a few hours of effort. In other words, hunter-gatherers were affluent because they had few needs, easily met.

Given that we now know that our ancestors hunted and gathered for 95% of modern Homo sapiens history this also means that our contemporary culture of work is not something “expressly evolved by nature” but rather a cultural artefact of the agricultural revolution which began 10,000 years ago.

Most proposed solutions to the threat of automation tend to focus on how we might be able to continue to create employment and generate growth in an AI driven world. But the evidence from hunting and gathering suggests that we would do better to use this as an opportunity to re-imagine our relationship with work radically.

This is of course far easier said than done. Doing so will have a series of cascading influences that will have profound effects on the way we organise our economies and societies. Most obviously it will require that we deal far more actively with reducing inequality and embracing the idea that those without work are nevertheless entitled to full participation in our societies. And even if this idea may seem to be preposterous it is one that is beginning to gain traction in some of the more tech-driven societies on our planet.

Finland, Holland and California have all begun large-scale experiments in providing universal basic income regardless of employment and the early results are promising. At the moment this is seen as something that only rich countries can afford to try, but similar initiatives in countries like South Africa where the consequences of extreme inequality and unemployment are especially pernicious are likely to be far more transformative. More than this, doing so might enable us to reconnect that broken lineage with the world’s most successful civilisation, a people who worked this all out long before anyone else. DM