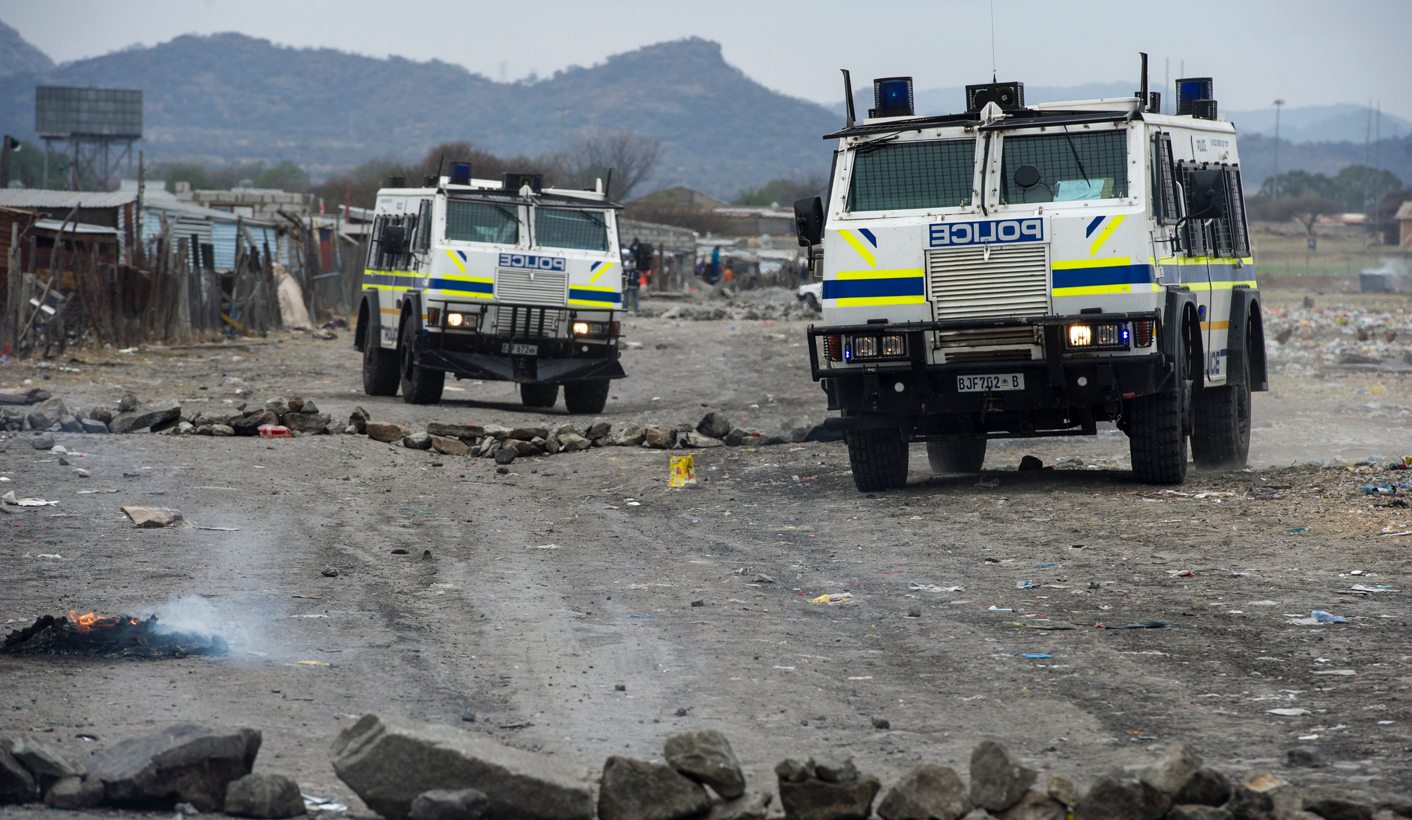 Draft regulations for a State of Emergency were outlined at a “workshop” attended by 30 Department of Defence officials in October this year. For the first time in 20 years the draconian regulations enabling a president to rule by decree have been adapted (they would only become the law after President's and Parliament approval). The changes allow for all internet and cell phone communication to be blocked and citizens to be arrested, searched, jailed; their property can be seized without a warrant. From their side, The Presidency and the South African National Defence Force (SANDF) claim to know “nothing about this”. Here is what SCORPIO has unravelled so far. By PAULI VAN WYK for SCORPIO.

An “inter-departmental task team” was set up during 2016 to draft new State of Emergency regulations, a confidential SANDF document signed by mayor-general Eric Mnisi, head of the Defence Legal Services Division, shows.

The document was obtained by Rapport journalist Erika Gibson. She shared the document with Scorpio out of public interest.

Right to Know subsequently published part of the documents  and Scorpio does so here too:

The mysterious order to suddenly redraft regulations for a State of Emergency – an order no one wants to take responsibility for at the moment – culminated in a “workshop” held at the South African Air Force college in Thaba Tshwane on 25 October 2017. It was attended by a delegation of 30 senior SANDF officials, including at least six generals and nine colonels from the Operations and Legal divisions, according to the Mnisi document.

It is unclear who ordered the SANDF to commence the drafting of the State of Emergency regulations. Spokespersons for the Presidency and the SANDF claim to know “nothing about this”.

The SANDF’s Siphiwe Dlamini did not comment despite promises to do so.

Yet, only the President may declare a State of Emergency. It has to be signed off by Parliament and is supposedly declared when “the life of the nation is threatened by war, invasion, general insurrection, disorder, natural disaster or public emergency” or when it is “necessary to restore peace and order”, Section 37 of the Constitution states.

If Zuma has his way and parliament endorses the State of Emergency, South Africa will take a leap back to the draconian days of the past. It is Appendix E: State of Emergency Draft Regulations in Mnisi’s document that makes for particularly frightening reading.

All interconnectivity – the use of computers and cell phones – will be blocked. No one will be allowed to write or record, possess or disseminate a “disruptive statement”, the regulations notes. If you do – journalists, activists, freedom fighters – you’ll land yourself a fine, a jail sentence of up to three years, or both. Curfews might also be imposed, meaning that no one would be allowed to be outside their homes during a certain period. All ports of entry and exit to the country as well as any infrastructure or business (think bridges, roads, telecommunications buildings, or the bakery down the street) can be seized and (mis)used for an ulterior purpose. Any person inside our borders can be arrested, detained (anywhere, basically) and searched without a warrant by a “member of a security service”. Any person may be ordered to provide documentary proof of their identity on the spot and, without a warrant, the security services can enter or seize any building, vehicle and electronic device. The description or rank of a “member of a security service” is not defined – it therefore seems to refer to the broadest possible definition.

Provisions in the newly drafted regulations instruct a security official to get a written order or warrant within at least 24 hours after an arrest, seizure or search. If the detainee is to be moved around, another written order must be issued. But this order can be signed, again, by any member of the security service.

Any person hindering a “member of a security service” in “carrying out any duty”, is guilty of an offence. Any person convicted of an offence is jailed for up to three years, fined, or both.

All of the above can be motivated by a “member of the security service” who is “reasonably of the opinion that the presence or conduct” of any person at any place “endanger or may endanger the safety of the public or the restoration or maintenance of peace and order”, according to the draft regulations.

Once a State of Emergency has been promulgated, the public will be powerless to do anything about it, because the President is acting to ensure their “safety” as well as “peace and stability” in the country.

According to the draft regulations, gatherings and demonstrations are “permitted” until a “member of the security service” decides it is disruptive and feels the need to “ensure public safety”. Then the gathering and demonstration is also illegal.

According to section 37 of the Constitution, a State of Emergency may not continue for more than 21 days, unless the National Assembly resolves to extend the state of emergency for “no more than three months at a time”.

Section 37(3) of the Constitution further holds that any court may decide on the validity of a declaration of a state of emergency and, if granted, whether such a declaration may be extended.

‘The regulations are probably unconstitutional’

The “Draft Regulations is a concept master document, to be adapted by the Task Team as the circumstances of the specific emergency will dictate as and when it arises. The Regulations will only thereafter be signed and promulgated by the President”, Mnisi wrote in his letter.

This paragraph seems to indicate that some event prompted the regulations to be drafted as a contingency plan. The plan is to be updated with details of the specific emergency “when it arises”. Only then will it be signed and promulgated by Zuma and Parliament.

Civil organisation CASAC’s Lawson Naidoo says, based on legal advice, the regulations in Mnisi’s letter are too broad to pass constitutional provisions.

“The regulations must correspond with a certain set of circumstances. As it stands now, the regulations are probably unconstitutional.”

Answering a question if an emergency can be manufactured, Naidoo said it is “certainly a concern”.

“But there are no objective criteria pointing to any problem at the moment. There is nothing threatening the ‘life of the nation’. The emergency needs to be on a scale that justifies a State of Emergency, it cannot be a localised situation.”

States of Emergency was a key instrument used by the apartheid government to attack and smother political dissent. The most memorable was perhaps the declaration of States of Emergency in 1960 (after the Sharpeville massacre) and twice in the 1980’s. In May 1960 government revealed in parliament that 18,000 people had been arrested and detained in two months in 1960, the South African History Archive (SAHA) notes.

The 1985 and 1986 States of Emergency were even worse. Within six months after the Emergency of July 1985, 575 people were killed in political violence, more than half by the police, SAHA says. The regulations allowed soldiers and police to patrol townships, activists  to be detained and their homes raided without warrants. The first Emergency was later lifted. But in 1986 another, more oppressive Emergency, was promulgated. Political funerals were restricted, curfews were imposed, music and art was censored, certain indoor gatherings were prohibited and journalists were banned from filming in areas of political unrest. According to SAHA an estimated 26,000 people were detained between June 1986 and June 1987. DM