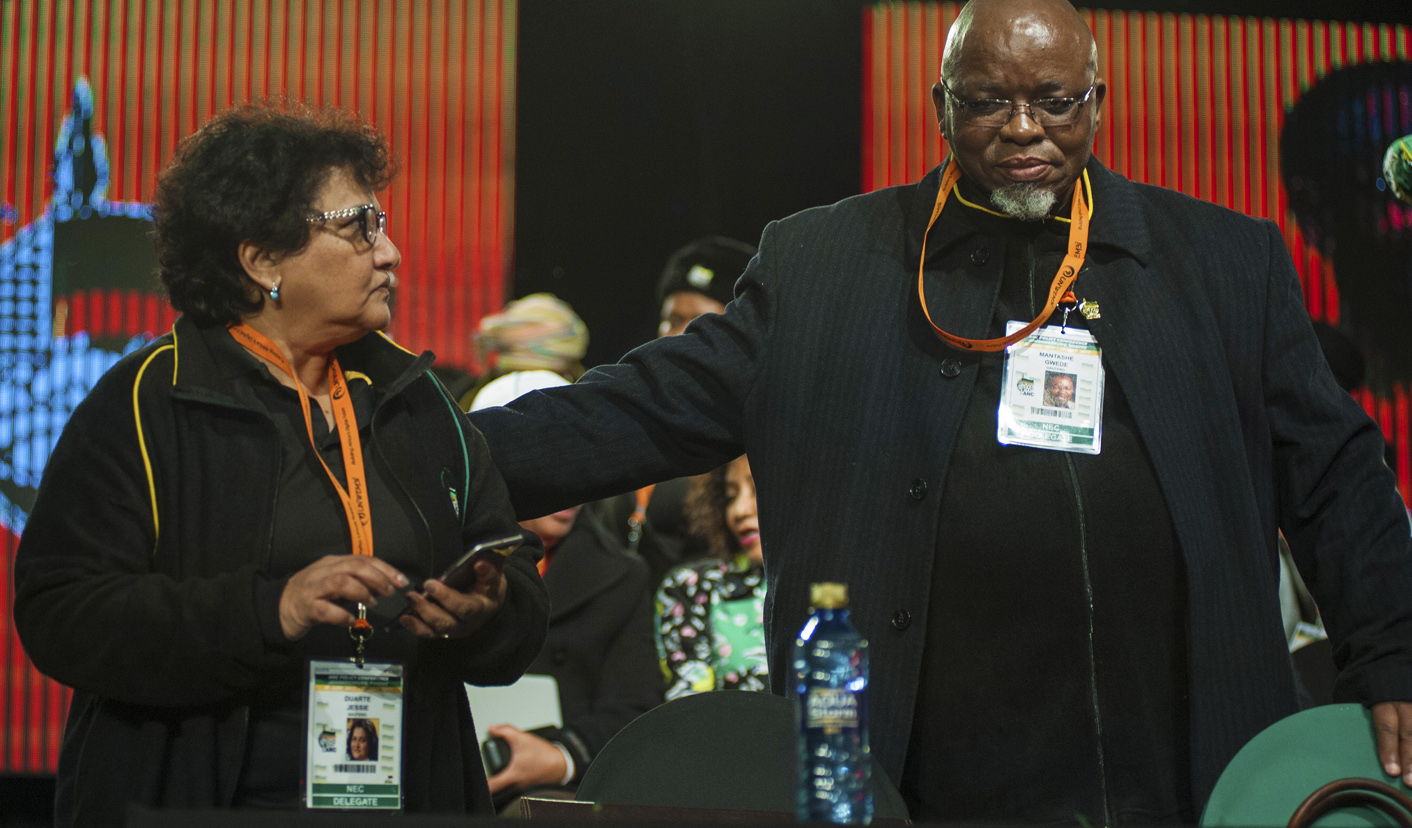 It’s set to be a close race in the ANC’s national elective conference after the nomination of ANC MP Nkosazana Dlamini Zuma in KwaZulu-Natal – the biggest province – still left Deputy President Cyril Ramaphosa with a psychologically significant lead. Despite this close and fierce contestation, party bosses are certain that the conference won’t fall apart. By CARIEN DU PLESSIS.

Ramaphosa was, however, perhaps the more successful candidate, as he got more nominations in KwaZulu-Natal than detractors thought he would, with 193 branch votes compared to Dlamini Zuma’s 433 (a massive 56 branches abstained), while Dlamini Zuma got a much smaller chunk of Limpopo branches – 104 versus Ramaphosa’s 391 – than her campaigners claimed.

These numbers were revised on Tuesday after delegates picked up a glitch in the branch numbers. Due to a glitch in the electoral system the number of branch nominations in the province changed with Dlamini Zuma receiving 454 branch votes to Ramaphosa’s 191 votes.

By Monday evening Ramaphosa had received 1,862 branch nominations, while Dlamini Zuma managed 1,527. When delegates are counted – which include the leagues and the provincial and national leadership – the race could be even closer, but for now Ramaphosa’s campaigners are claiming a comfortable lead.

Despite talks of unity following a dinner called by President Jacob Zuma for the seven presidential hopefuls, and a meeting with a number of provincial chairmen afterwards, KwaZulu-Natal ANC chairperson Sihle Zikalala took a combative stance at his province’s PGC on Monday, attacking Ramaphosa – without mentioning him – as having “un-ANC tendencies”.

He said the New Deal, an economic plan announced by Ramaphosa a few weeks ago, was not an ANC policy position.

“There is no policy of the New Deal ever discussed by any structures of the ANC,” he said.

Even though this was a last stab aimed at Ramaphosa, Zikalala also had a point. Presidential candidates are supposed to follow party decisions on economic policy, although the implementation of this would probably depend on personal style.

The chair of the ANC’s economic transformation committee, Enoch Godongwana, told journalists in Johannesburg during a briefing on Monday afternoon that the ANC’s economic policy would be fleshed out by the ANC’s new national executive committee, to be elected at the party’s elective conference starting next Saturday at the Nasrec Expo Centre.

“Our job in the ANC is to draw [up] a list of our aspirations, and it is up to someone to translate those aspirations into policy to implement,” he said. “The incoming NEC has a great task.”

They have to take concrete actions to build investor and business confidence, and reform the economy.

Zikalala’s attack on the New Deal, however, showed how deep the divisions were over the leadership contest.

This has prompted observers and even some insiders to speculate that the conference could fall apart, but ANC Secretary-General Gwede Mantashe raged against any such suggestions.

Despite a number of court challenges and branch disputes (he didn’t want to say how many), Mantashe at another briefing on Monday said the conference would go ahead.

This is despite court challenges in at least four provinces – two against the PGCs in Free State and Mpumalanga and two against the leadership in the Eastern Cape and KwaZulu-Natal – which Mantashe said would not affect the process.

Mantashe started by insisting that the “contestation” in the ANC was part of the “internal democracy” in the party, not divisions, as reported in the media.

“In this regard contestation of leadership position must strengthen the organisation rather than weaken it,” Mantashe said.

Contestation was not a precursor to a breakaway, he added.

He then explained why “people going to court” was “not a big issue” for him.

“The issue is people who launch disputes [about the branch meetings] and say ‘if you don’t agree with me, I will go to court’, that worries us because this means the dispute process is a formality.

“The problem with courts is if they go to court, it becomes an exciting issue in the ANC. What people don’t appreciate is many of those court cases don’t succeed because they are not well thought through. People are doing it emotionally, I think they want to spite the ANC.”

Mantashe said the ANC contested the court cases because the party didn’t want the court to make decisions not based on party process.

In his view, however, these were all formalities.

“Going to court, that is the freedom people have,” he said.

“I can tell you, once we finish the conference, nobody will be interested in going to court.”

“There will be another chance if you think you are wrong [not] to be nominated,” he said. This could happen from the floor, with 25% of branch delegates.

Mantashe also said the court case challenging the legitimacy of the Free State’s leadership, which has continued serving since after their term has expired, would not have an effect on the conference.

If the Free State does not manage to hold its provincial conference this weekend, the leadership’s term would be extended so that it could attend the conference, he said.

Mantashe did not seem fazed by the possibility of ANC members challenging the legitimacy of the conference afterwards. Perhaps he knows something about the outcome of the conference that’s not yet public, or perhaps he is displaying confidence in the hope that everything would be fine.

“Anarchists” would be dealt with by their provinces, and it would be up to provinces to remove disruptive delegates.

“The conference is going ahead,” he said. “We can’t make assumptions here of what if and what if. We cannot work that way. We are running an organisation, we are going to a conference, we are working very hard to ensure that that conference is successful and stable.” DM