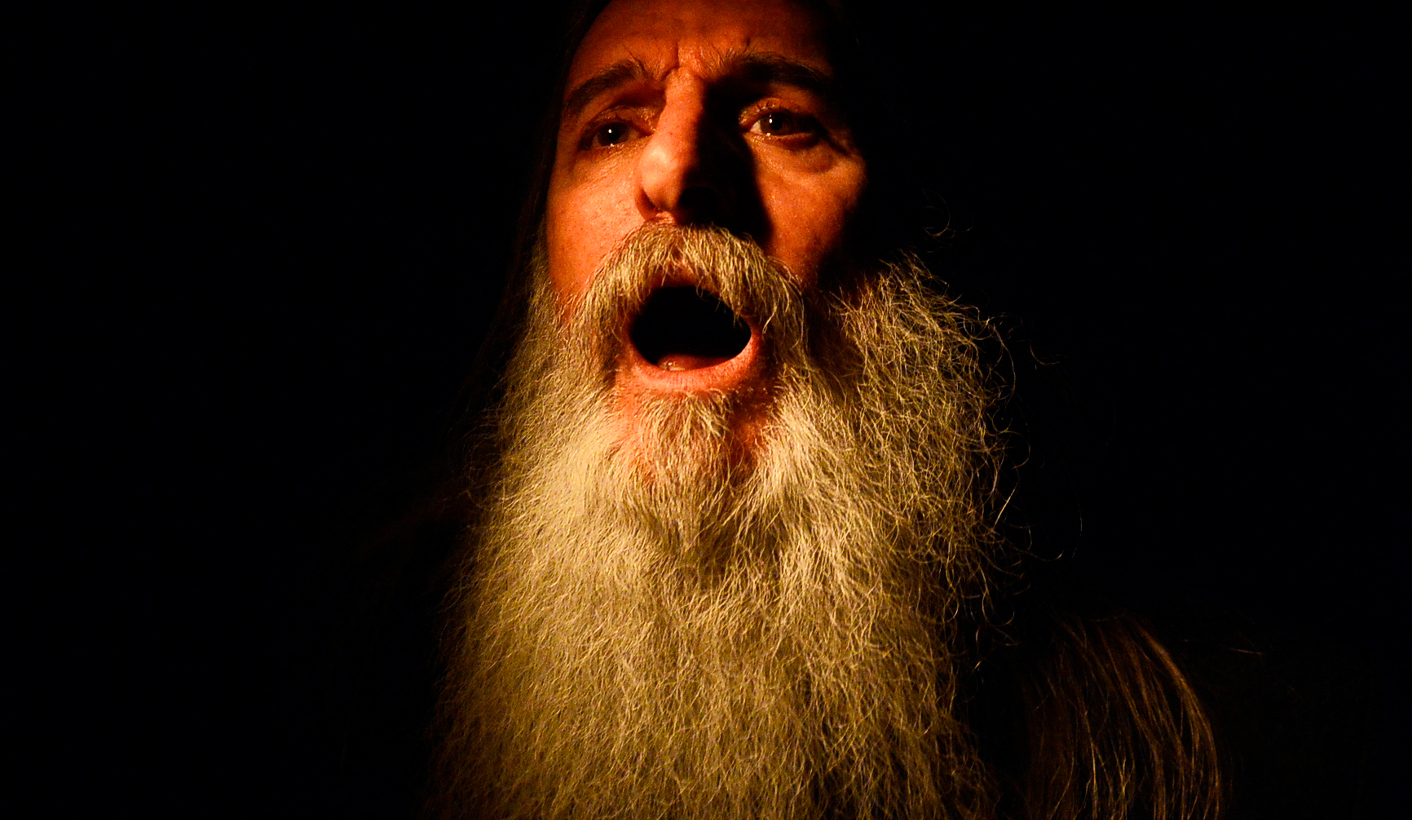 You can shut your eyes and listen, appreciating the beautifully crafted script and the magic of the telling, safe in the knowledge that you’re not missing any visual action. LESLEY STONES reviews Dead Yellow Sands.

How exciting can that be, you wonder, until Weir starts talking, sitting in a chair under stark lighting that illuminates his manic beard, flowing white hair and gentle, often pain-filled eyes.

He tells small stories of a blind man in a care home, an oil rig painter, a man dying of cancer, bringing each character to life with different accents and fluctuating speech patterns. Plucking them from the miserable streets or lonely bedsit and isolating them under the spotlight as he tells their stories.

Dead Yellow Sands – a reference to the gold mine dust that blew through a childhood in Benoni – was written by Weir based on people he knew, or on others he observed and imagined how their lives might be.

The Scotsman dying of cancer was his father, eager to be back at work even with tubes down his throat and a weight of 47kg. Another poignant character is Teeny, a young man dying of Aids, perhaps.

Weir sings too, breaking into snippets of remembered songs as a fading Thespian who performed on a bandstand.

This is powerful storytelling, with the pictures forming in your head as Weir and his mellifluous voice spin tales embroidered with detail. His rich, deep tones add a sombre touch to these vignettes, which all have a melancholy depth or outright sadness. This is dark theatre, in both the literal and figurative sense.

You can shut your eyes and listen, appreciating the beautifully crafted script and the magic of the telling, safe in the knowledge that you’re not missing any visual action.

Dead Yellow Sands won Fleur du Cap Awards for the Best Performance in a One Person Show for Weir and Best Lighting Design for Guy de Lancey. It’s directed with understated minimalism by Bo Petersen, and a slump to the left or a twist to the right are the extent of Weir’s movements. It’s so compelling that nothing more is needed, except for a longer pause between each character, so the audience has time to reflect and take stock of their emotions before we’re into the next.

A recurring theme is how much difference a touch of kindness makes, creating a moment that brightens a day or gives new hope to a weary life. And conversely, how mankind’s usual callous lack of care can be so hurtful.

It’s excellent, extremely moving, and makes you want to perform a random act of kindness to make somebody else’s story a little less sad. DM

Dead Yellow Sands runs at the Market Theatre until 10 December. Tickets from www.webtickets.co.za