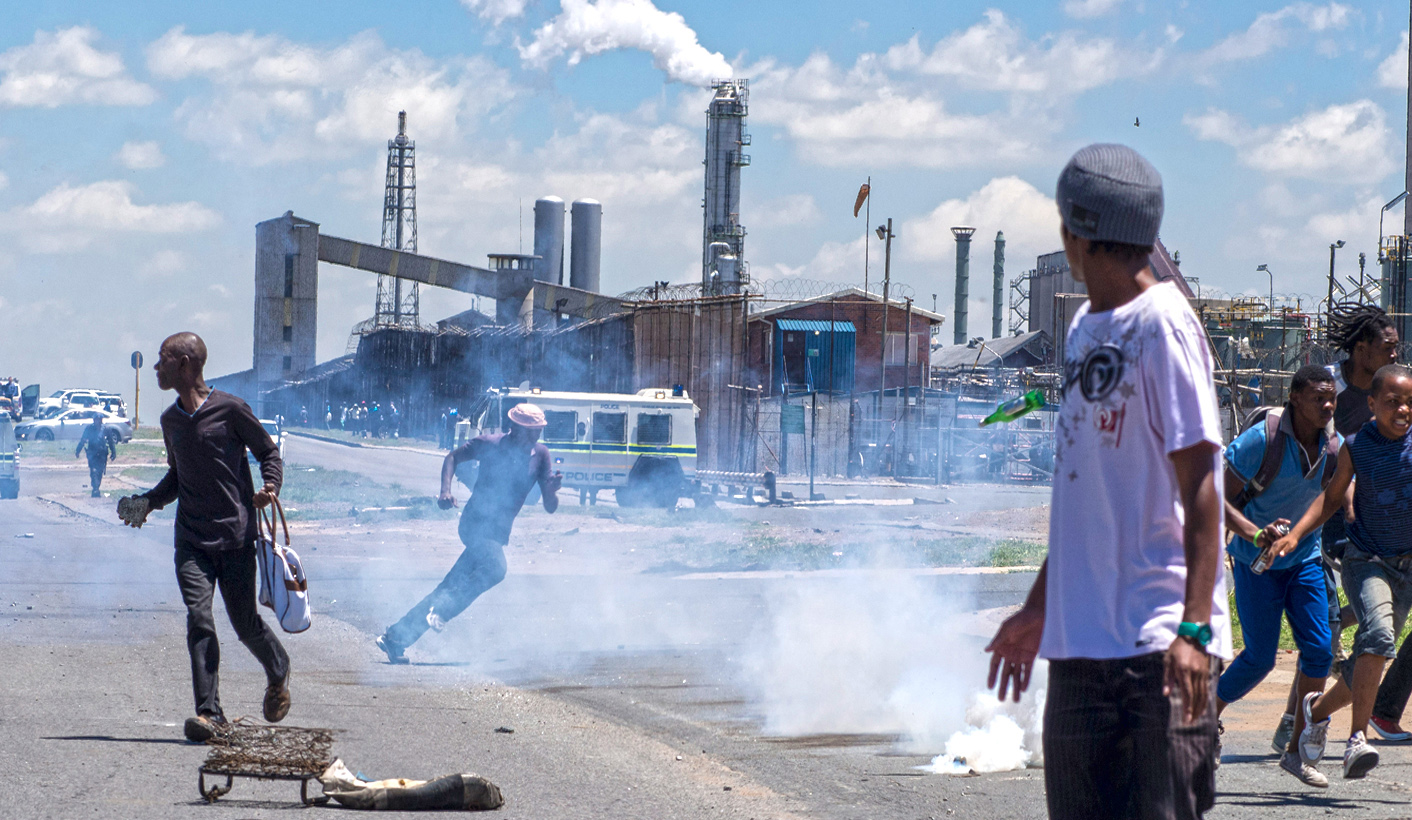 We could be forgiven for concluding from the screaming headlines that the most serious problem the country faces is State Capture for corrupt purposes. This focus could lead us to conclude that the problem could be blamed on one man, and consequently be solved simply by removing that one man. This slant in political debate individualises the problems we’re experiencing as a country, and prevents us from focusing on a much more fundamental problem, which is inequality. By JANE DUNCAN.

South Africa is enjoying areas of amazing strength in its political debate, partly because of the rude health of investigative journalism. The fact that we know what we know about the extent of corruption in the state is because of the efforts of investigative journalism outfits such as the amaBhungane Centre for Investigative Journalism, Media24 investigations and individuals such as Jacques Pauw. We would be doing them a disservice not to acknowledge their courageous work.

However, we could be forgiven for concluding from the screaming headlines that the most serious problem the country faces is State Capture for corrupt purposes. This focus could lead us to conclude that the problem could be blamed on one man, and consequently, it could be solved simply by removing that one man.

This slant in political debate individualises the problems we’re experiencing as a country, and prevents us from focusing on a much more fundamental problem, which is inequality.

The more fundamental debate we should be having is that the way our society is organised is unsustainable and must change. Inequality and unemployment are structural problems and require massive interventions to address them, and the narrowness of the debate is preventing us from seeing the full extent of the social crisis in our country.

In fact, we could argue that South Africa has one major problem, and one only, and that is inequality, and every other problem is a by-product. But because so much of the debate is elite-orientated, and focused on the doings or misdoings of select political leaders, the losers of the current system, who are more likely to raise the systemic issues, remain largely excluded from the debate.

This exclusion could be attributed, at least in part, to the fact that the social forces that are the most marginalised in the current order are not sufficiently well-organised to exercise social power. One of the least well-organised constituencies, at least at national level, is the unemployed. The current economic consensus (or at least what appears to be the consensus) continues only because the unemployed lack a significant, organised national voice. Unfortunately, much of the political debate tends to reproduce and reinforce this silence.

In fact, much of the debate has also been polarised into simplistic binaries: so, you are either in the State Capture camp or the white monopoly capital camp. But the South African reality contains elements of both. It is incontestable that poverty still continues to wear a black face, while wealth generated by a highly monopolised economy still continues to wear a white face.

This means that white monopoly capital still is an important (although not completely accurate) descriptor of the South African economy; at the same time, the current predatory elite are worsening the problem.

But, on the other hand, there is no such thing as clean capitalism; cronyism is endemic to the system, and the polarised debate also fails to capture that reality. A sophisticated analysis should be capable of capturing the descriptive power of both concepts.

Because the debate is skewed towards the undoubtedly very serious problem of State Capture and the conduct of one individual, there is little serious debate on political alternatives. What debate there is concentrates on changing leaders in the ruling African National Congress (ANC): hence the massive focus on the December conference and the factions vying for the control of the party.

Nowhere is the paucity of debate more evident, though, than in relation to the economy. Take the case of the Economic Freedom Fighters (EFF), for instance. After a period of media scepticism about their leader, Julius Malema, coverage of the party became much more positive in the run-up to the 2014 national elections, as the party offered a spectacle that provided media drama.

Yet, the EFF’s attempts to shift the debate on the state of the economy through, for instance, proposals on selective nationalisation, were met with guffaws of derision. There appears to be an unspoken consensus, especially in the economics media, that assumes that all “reasonable”, “practical”, “workable” solutions to South Africa’s problems must converge on the neoliberal model, which has been shown over and over again to be prone to crisis and hence to be unsustainable.

Political debate, including media debate, remains dominated by the political centre: the fact that large sections of the media subscribe to the professional model tends to obscure these systemic biases. Any debates that raise the problems of capitalism tend to be branded as unrealistic.

In this regard, there is a fundamental mismatch between the ideas that circulate in broader society and popular politics, and the ideas that circulate in much of the media. For instance, socialism still remains a popular idea in mass politics; hence, some of the most significant realignments that have taken place in mass politics since the Marikana massacre are inspired by anti-capitalist or socialist ideas.

Yet these ideas continue to be sniggered at in polite society. Until and unless the politics of mass organisation are taken seriously, we cannot have the basis for a true political debate that puts all the political options on the table and subjects them to critical scrutiny.

This lack of debate can lead to ludicrous outcomes, where ill-considered positions are taken: the support by sections of the left for former Zimbabwean president Robert Mugabe, in spite of the fact that the broad mass of Zimbabweans rejected his leadership, is a case in point. The tendency to counterpose the current neoliberal order with crude anti-imperialism and racial nationalism that glorifies despots is insulting to those Zimbabweans who rose up against Mugabe.

There is also a tendency to assume that only political and especially parliamentary parties make politics, and the correct platform for such politics is Parliament, governments, party congresses and campaign trails. But politics is made in many other places in our society, and unless ways are found to reflect the true diversity of political debate in our country, the media and public commentary will continue to be at odds with broader society.

So, one of the arenas where popular politics is made, namely protest action, becomes of media interest only when buildings are burnt down and there is general disorder on the streets. As a result, some protesters have been known to engage in disorderly conduct simply to attract media attention.

In this regard, I remember being told by a protest leader in an informal settlement that they were planning a protest and they informed the media. One journalist phoned him and asked him if they were planning a disruptive or violent protest. He said no, as the community had learnt that such protests can create more problems than they solve, and that as a result, they had committed themselves to a peaceful protest. Apparently the journalist told him that if that was the case, he wouldn’t attend and cover the protest.

Jane Duncan is a professor in the Department of Journalism, Film and Television at the University of Johannesburg. This article is based on a presentation for a seminar entitled ‘Political Debate in South Africa: What is the Problem’, organised by the Wits School of Governance and Auwal Socio-Economic Research Institute, Wits Business School, 23 November 2017.