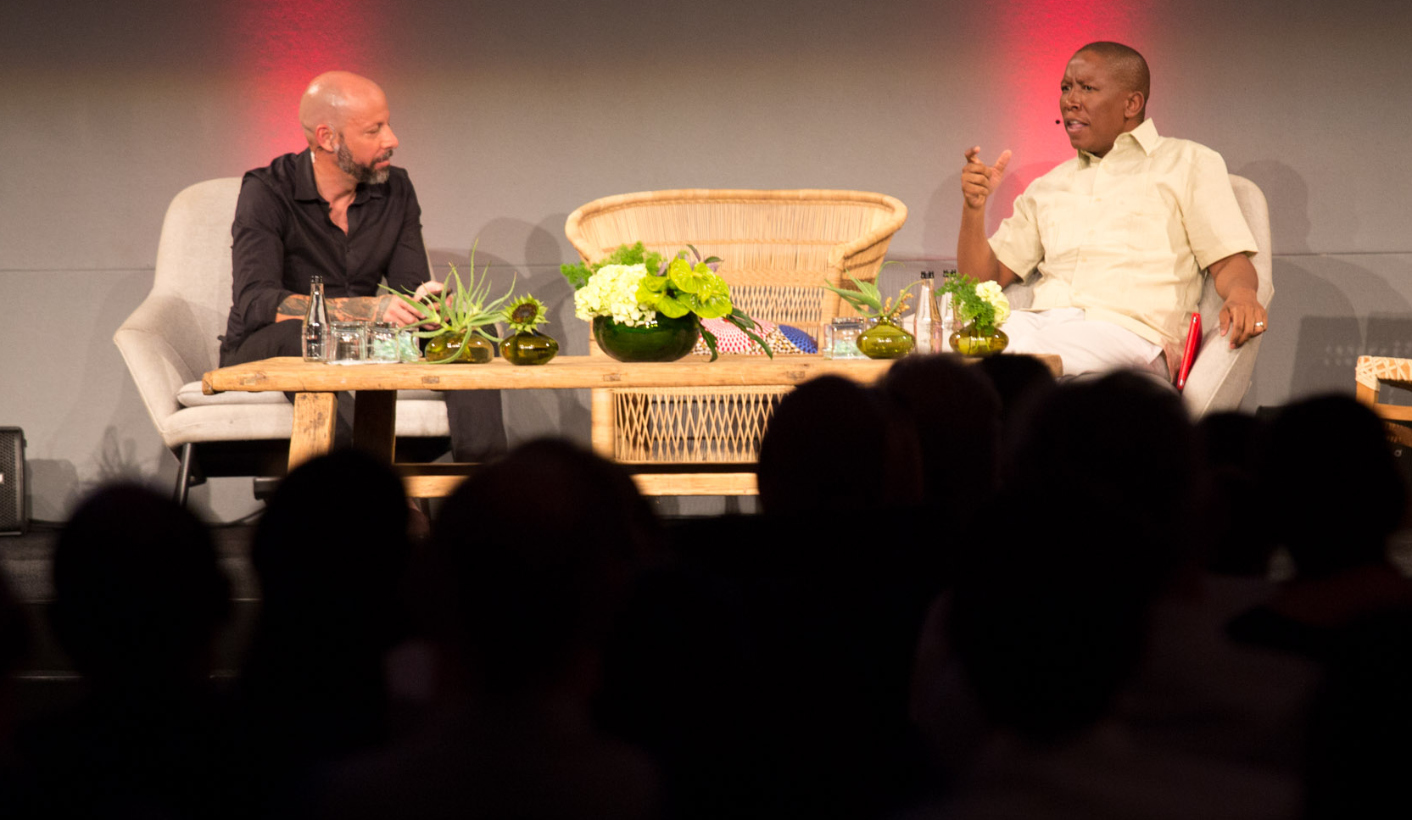 The final words of the 2017 Gathering were left to EFF leader Julius Malema. The Commander-in-Chief used the platform to explain his silence this year, why the ANC is like Omo washing powder, how his love for Robert Mugabe has never faltered – and how SARS, he claims, pursued him via its rogue unit over his tax bill. By REBECCA DAVIS.

Although Julius Malema’s address came at the end of a long day at Daily Maverick’s The Gathering, he received one of the warmest receptions. This was due in no small part to a vocal EFF contingent in the audience: as moderator Richard Poplak wisecracked, it was a crowd so partisan the event might as well have been the EFF’s own electoral conference.

Malema, dressed in a cream linen suit rather than his parliamentary get-up, termed The Gathering “one of the most important platforms in the South African calendar” – though he could not resist a dig at its Sandton hosting, reminding organisers that “there are also venues in Alexandra”.

The Commander-in-Chief used a short prepared address to critique not just ANC governance but also the DA’s, saying that all parties governing municipally were failing dismally to meet the needs of South Africa’s poor. The EFF had resolved not to enter into coalition agreements with any party due to ideological differences, Malema said, explaining instead that the party had adopted a policy of voting in hung municipalities for “anything that makes sense at the time”.

He made it clear that even a functional solidarity with the DA is not comfortable for the EFF, however. On Johannesburg Mayor Herman Mashaba: “It is wrong to think our problems are caused by foreigners.” Malema claimed that Tshwane Mayor Solly Msimanga has a white supervisor due to the perception that “black Africans cannot be trusted”. He described Nelson Mandela Bay Mayor Athol Trollip as “just arrogant and not listening to anyone”.

Coalition governance, it appears, does not meet with the EFF’s favour. “In 2019, if there is no outright winner, voters should vote again until they decide who should be their government,” Malema suggested.

He also had words of warning for the DA:

“In 2016, the DA won some municipalities, not because people outvoted DA,” he said. “The people did not go to the polls. The people love the ANC. Without the ANC, there is nothing for them.”

It was a curiously candid statement for an opposition party which frequently pronounces itself to be the “government-in-waiting”. Malema compared the ANC to a trusted washing powder, and the EFF to an upstart competitor brand. Voters wanted Omo, he said; they could not yet trust the new stuff, however much its support base might claim its cleaning powers were superior.

“Our people are not that gullible,” Malema said. “They want to see: does this have staying power?” He suggested that only over time, by dealing with its internal matters appropriately and gradually governing wards and university SRCs, can the EFF gain the trust of the people.

Asked by Poplak why he had been relatively quiet on criticising the ANC this year outside of Parliament, Malema responded:

“I have been quiet deliberately because the ANC is eating itself. Every time I speak, I unite them.”

When the ANC is finished?

“I come out and take over the ground.”

In the course of a wide-ranging discussion, Malema clarified his feelings about recent events in Zimbabwe.

“I love Bob [Mugabe],” he said. “But when I love you, it doesn’t mean I can’t criticise you.” Mugabe was overdue to cede power, Malema said: “A good dancer knows when to leave a dance floor.”

Malema paid tribute to the fact that the Zimbabwean coup had been executed with minimal blood loss, but earlier he had warned that regime change in South Africa could only be achieved through the ballot box.

The EFF leader displayed little appetite for the discussion of State Capture, in contrast to the other speakers of the day. He termed the Guptas “an irritation” and claimed that he had been criticising white monopoly capital long before British PR agency Bell Pottinger popularised the term.

“We must not make the mistake of abandoning the fight for economic transformation because of irritations,” Malema warned.

He reiterated the EFF’s call for the nationalisation of banks, saying he was aware that people voiced concern that if this happened foreign investment would flee South Africa. But, he asked, “What’s the point of investment if it doesn’t benefit us?” Malema suggested that perhaps the time was ripe for “crazy” policies like nationalising banks.

He grew defensive when an audience member asked him about his battle with SARS over an R18-million tax bill, with the accompanying suggestion that Malema’s failure to pay the revenue receiver what it was owed was an example of hypocritical behaviour.

Malema initially blamed his own ignorance about tax-related matters, saying: “I had very little knowledge on how taxes were dealt with – I thought the employer dealt with it.” (Earlier he had mentioned that all he learnt from his previous employer, the ANC, was to “drink alcohol with old people”.) He also claimed, however, that he was the victim of a politically motivated vendetta by SARS.

A SARS rogue unit followed him around, Malema alleged, in the hope of destroying him. “Little did they know I am not a product of material,” he said emphatically. He claimed that SARS strove to sequestrate him in order to drive him out of Parliament, and pointed fingers specifically at “racist of note” tax official Johann van Loggerenberg.

The myth of the SARS rogue unit had been dispatched decisively in a previous panel by author Jacques Pauw and economist Iraj Abedian, but Malema was undeterred in his allegations.

Notwithstanding his own experiences, he had a message for South Africa:

“All of us must pay our taxes.” DM