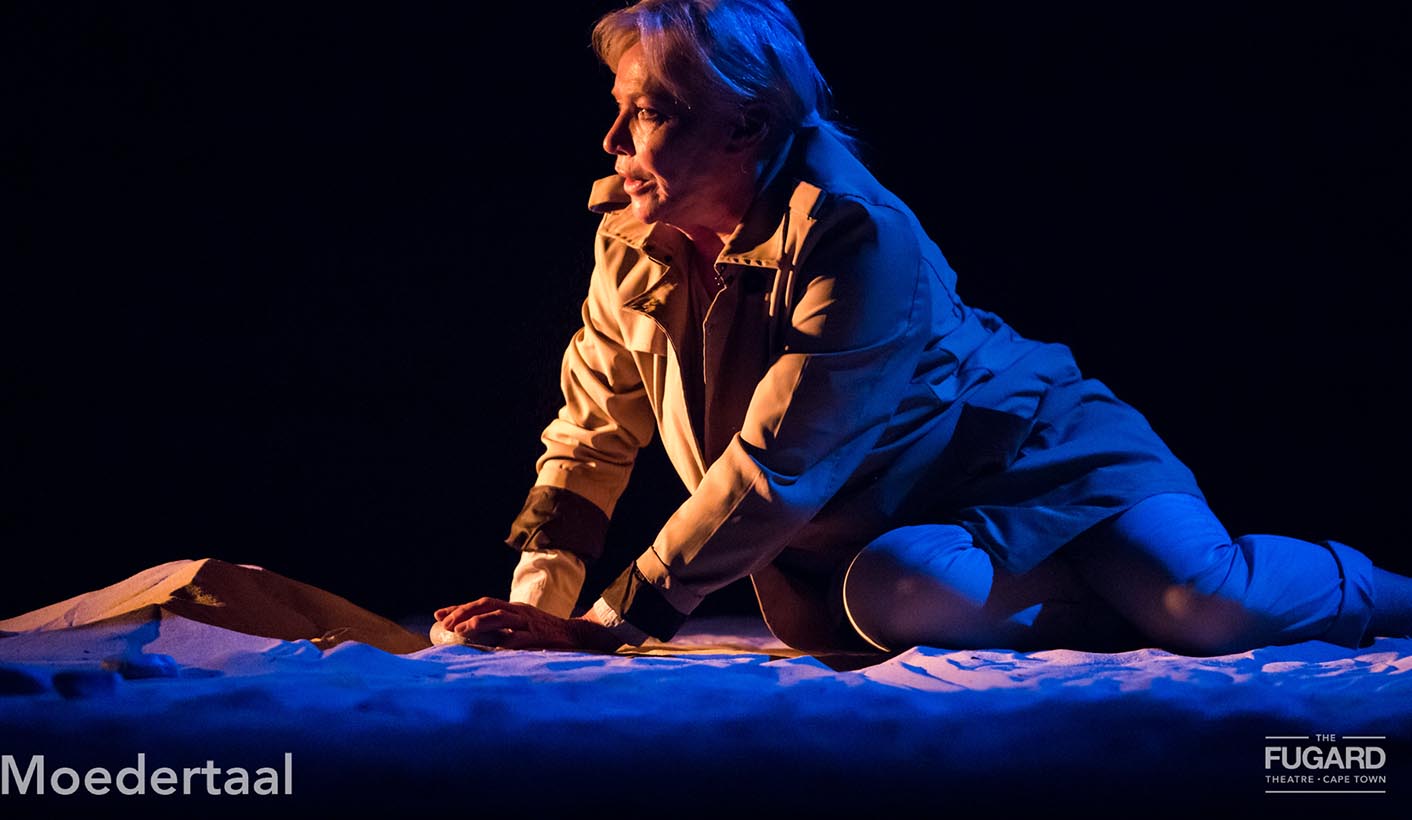 How I wished I didn’t have to read the subtitles in Moedertaal. Whenever I listened to the Afrikaans words spoken by Sandra Prinsloo I understood snatches of a beautiful, lyrical Afrikaans that cannot be translated. When I heard the Afrikaans and saw the translations in English I wanted to shout out: “That is not what she said; it is definitely not what he meant!”

That’s right, I said “he”. Hard as it was for me to believe, a man wrote this poignant and intimate story told in a very powerfully feminine voice by Prinsloo, that grande dame of South African theatre. Familiar and vreemd indeed.

Written and directed by Nico Scheepers, Moedertaal is the third instalment in Sandra Prinsloo’s trifecta of one-woman plays that began so beautifully with Die Naaimasjien. Scheepers, who also composed the music, has been described as “one of the most exciting young theatre-makers in this country”. He and Prinsloo make a formidable pair.

Evocative, compelling narrative (even in the translated surtitles … although less so) grabs us from the beginning. “Almost-poetry” that brings to mind and body the feeling of bare, dusty feet as we explore with Nellie her dead uncle’s farm. (The family has moved here after he put a gun into his mouth and pulled the trigger in a tragically familiar narrative.)

We feel the air thick with sticky, plummy smells and a sweet conspiratorial bond as she helps her dad make moonshine from the maroela fruit.

We feel the fire on our skin and our hearts break as the orchard burns down one night. Later, our hearts repaired a little, we are overcome by awkwardness when Nellie meets her life’s love as a teenager.

Their story is three-quarters familiar, populated and coloured in by many versions and vignettes of white South African stereotypes. The rest of it we watch from a distance, sometimes amused, often horrified. This quarter is the deeply personal, happiness and pain that can never be shared, the private journey between two people in love, touched occasionally by a third: a parent, another lover or, most importantly, a child.

As in life, even as each of them is uniquely quirky, there is a certain familiarity to all the misfits, the loners, the nut-jobs … in Afrikaans and in English. We think we know them and fear what they might want from us, so we back off and thank the heavens we didn’t end up like that … although we can remember more than a few moments when things looked to be heading that way.

Moedertaal gives us a tiny flash of how little we know about all the others – their lives, their loves and their losses – even if it looks so familiar that we thought those dusty bare feet were our own for a minute. DM

This article was first published by www.CallOffTheSearch.com