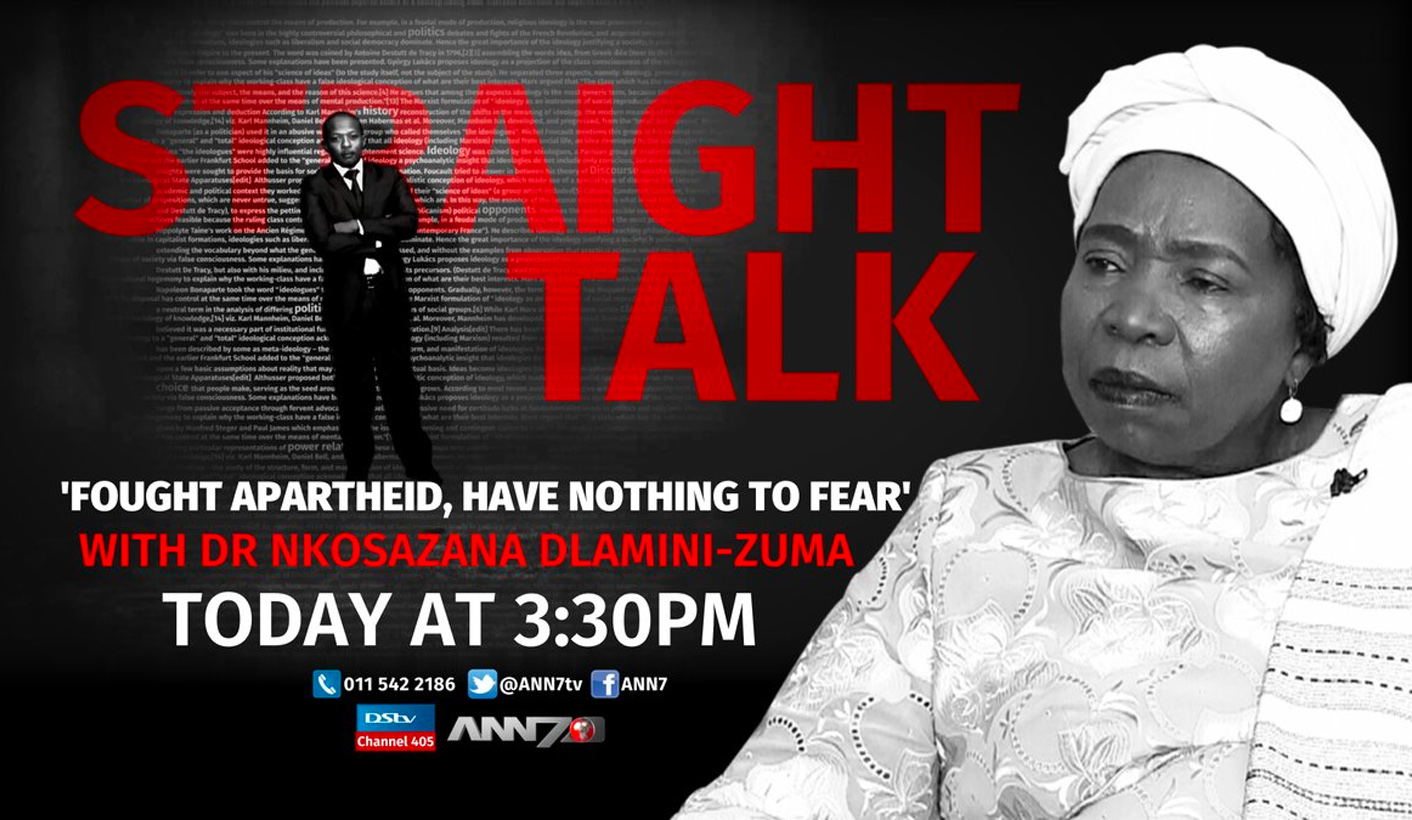 It is common knowledge to those who follow politics in democracies that the media can sometimes claim for itself the role of both player and referee. There is, obviously, no such thing as an “objective media”. But political players have a point when they ask for media organisations to be “fair”. There has been some criticism over the coverage of the current political race that much of the English-language media in urban areas has been biased towards Deputy President Cyril Ramaphosa, and against Nkosazana Dlamini Zuma. Some of this criticism may indeed be valid. But it may also be true that Dlamini Zuma could change some of this perceived bias herself: the reason much of the media appears hostile towards her is for the same reasons that much of the voting public appears hostile towards her. By STEPHEN GROOTES.

On Sunday the Sunday Independent published an exclusive interview with Nkosazana Dlamini Zuma, conducted after her 15-minute speech in Mpumalanga. During that interview she complained that “some of the challenges I have encountered in this campaign is the media onslaught. They (media) are taking sides and so they are campaigning against me. But these are challenges that half of the nation faces. These, however, are not the determining factors of who should become president because the branches have to decide”. In short, she appears to be suggesting that “the media” is set against her, while at the same time pointing out that it is not the media that will decide who wins the ANC’s conference in December.

In making these points she may be deliberately pointing to our past, where, in the run-up to Polokwane, the majority of the media appeared to support Thabo Mbeki to stay on as ANC leader. In the end, as you may have noticed by now, he lost, and President Jacob Zuma won. Then, and now, the media was strongly criticised for “getting it wrong” and allowing itself to be biased.

It is important at this stage to attempt to provide some definitions. To say “the media” doesn’t actually bring any clarity any more. It could mean ANN7 and The New Age, DStv in its totality (which means one would include the Lifetime Channel, proud broadcaster of Oscar Pistorius: Blade Runner Killer), the SABC, every single newspaper, independent radio stations and online dailies like Daily Maverick.

To refer to “the mainstream media” doesn’t necessarily help much either. While to many people that may mean independent media organisations using English, that would not be correct. In a country like this one, if the size of the audience is any measure, “mainstream” must surely refer to those outlets broadcasting in isiZulu and isiXhosa. Which means we’re talking about the SABC. It is important to remember that different media organisations report, analyse and opine differently. And that within media organisations different views are expressed. This publication, for example, includes comment from the leader of the DA , the Treasurer of the ANC and such proponents of good governance as Faith Muthambi.

The role of the SABC is important in this regard. Currently, there is no one really in charge, there is a board but no permanent CEO and no Chief Operating Officer, and no Head of News and Current Affairs. All of the people there are in acting positions. This could have the effect of allowing journalists to make the decisions about what to broadcast, what to take live, and how to report. This should, thankfully, lead to better decisions being taken than in the past. At the same time, many of the staff at the SABC have suffered through the reign and madness of Hlaudi Motsoeneng. They may well strongly believe that he was wrought upon them by Zuma. And they are unlikely to be that charitable to Dlamini Zuma in turn, as they may see her as part of the same political unit.

And this brings us to another of Dlamini Zuma’s problems – that many people in the commentariat do see her as part of the same political unit as Zuma. This is not so much to do with the sexist description of her as “Zuma’s ex-wife” but to do with the fact that she is supported by the same people who support him, and proposing what he proposes. It is hard to disentangle the two. And this is possibly her fundamental problem.

Many people in the media believe South Africa is more corrupt and poorer as a result of Zuma’s governance. They believe, with solid basis, that she would bring more of the same. And thus they are hostile towards her. This is backed up by the fact that it appears many people in the voting population have the same belief. Her approval numbers among all South Africans are roughly the same as Zuma’s. Data published by the City Press suggests that only 16% of the population believe she would be a good leader for the ANC (Ramaphosa’s figure is 43%). Surely it is beyond the power of the urban English language media to have created this perception.

Dlamini Zuma has also made other missteps in this regard. Carl Niehaus has been allowed to portray himself as her “campaign manager” and “spokesperson”, and has attended many events with her. Many people in “the media” were lied to by him when he was the ANC’s national spokesperson, before he was unveiled as a liar and a fraud. When such a person, who is fired from the position of ANC spokesperson, emerges as the presumed spokesperson of a leadership candidate, what do you expect the media to do? They know that the organisation as a whole has rejected such a person because they are a liar, they can hardly believe that person has credibility later. And this will tarnish their view of the entire campaign.

When examining other reasons for this possible bias in the role of the media, one technique is to think of media organisations as having constituencies to serve. In the US, Fox News has come to serve the constituency that is also served by President Donald Trump. CNN is serving a constituency opposed to him. Every time Trump lashes CNN it helps him, and it helps the network. It shores up the support of the people who oppose Trump. The people who are served by the urban-based English media are likely to be opposed to Zuma and thus Dlamini Zuma as well. Listening to talk radio stations in Joburg, one is likely to hear all sorts of insults and criticisms of Zuma. Even when there is evidence that the majority of those audiences used to vote ANC. The personalities on those stations can be dragged to the same position. If only because, on an objective level, it is impossible to say that Zuma has been a “good president” because of the litany of scandal around him. This then has an impact on how Dlamini Zuma is covered.

However, it is also important, when critiquing the media in this way, to dispel certain myths. One of these myths is that Dlamini Zuma has been inaccessible and refused to do interviews. It is true that the only two interviews she has done have been with ANN7 (which simply confirms the bias of many against both her and ANN7) and the Sunday Independent (which appears to have ownership issues of its own, and was used by its editor Steven Motale to make wild claims. However, it is also of course true that Ramaphosa has also given no interviews. He may have spoken in more areas, and more often in urban settings than Dlamini Zuma, but that hardly justifies the claim that it is she who is “inaccessible”. In fact, if you wanted to ask who was the most accessible to the media in this race, that prize would surely have to go to Zweli Mkhize. He has given more interviews than anyone, faced more questions, and probably spoken to the widest set of constituencies.

It is also important to remember that much of the commercial media exists to serve the desires of the urban elite. It is surely true that Ramaphosa is much closer to that elite than Dlamini Zuma. He is in a sense, in this race at least, “their candidate” while Dlamini Zuma explicitly claims to be the candidate of other members of society. This claim could be contested, but it is certainly there.

Supporters of Dlamini Zuma would also do well to be very clear about what their criticisms of “the media” actually are. Just as political commentators are warned not to confuse their wishes and desires with the evidence predicting what will happen, so her supporters should remember that just because analysts may think Ramaphosa will win, that doesn’t make them biased against her. If someone is going to try to predict this race, they have to look at the evidence before them. If that evidence points in a certain direction, it would be hard to justify the claim that they are simply biased against the other candidate.

Unfortunately for Dlamini Zuma, there is the other evidence against her probity as a candidate. It is not just that she is part of the same political unit as a man who has been so thoroughly implicated in wrongdoing and has, for want of a better phrase, been “captured”. It is also because of her own actions. Ramaphosa, for all the criticism that can be made against him (he is incredibly rich, an elitist, has cheated on his wife, has refused requests for interviews, and produces ridiculously expensive books about buffalo, etc) has not, so far, been photographed with a criminal. The Sunday Times has published pictures of her with a self-confessed cigarette smuggler. It would surely be ridiculous to suggest that the urban-based media can simply ignore claims like this, and not factor them into their reporting of a political candidate.

To determine media bias is a complex and difficult task. The media is made up of different groups of individuals that push and pull against each other, with internal and external battles under way all the time. In a political contest as difficult as this one, “the media” is simply never going to be objective. It is easy for different candidates to blame the media for its reporting. But it should not be forgotten that they too carry some responsibility. If someone believes the media is reporting on them negatively, they could also examine their own actions. Or simply ignore it. Which may mean they still win the main contest, but then have to face that “negative media” later, during an election. DM