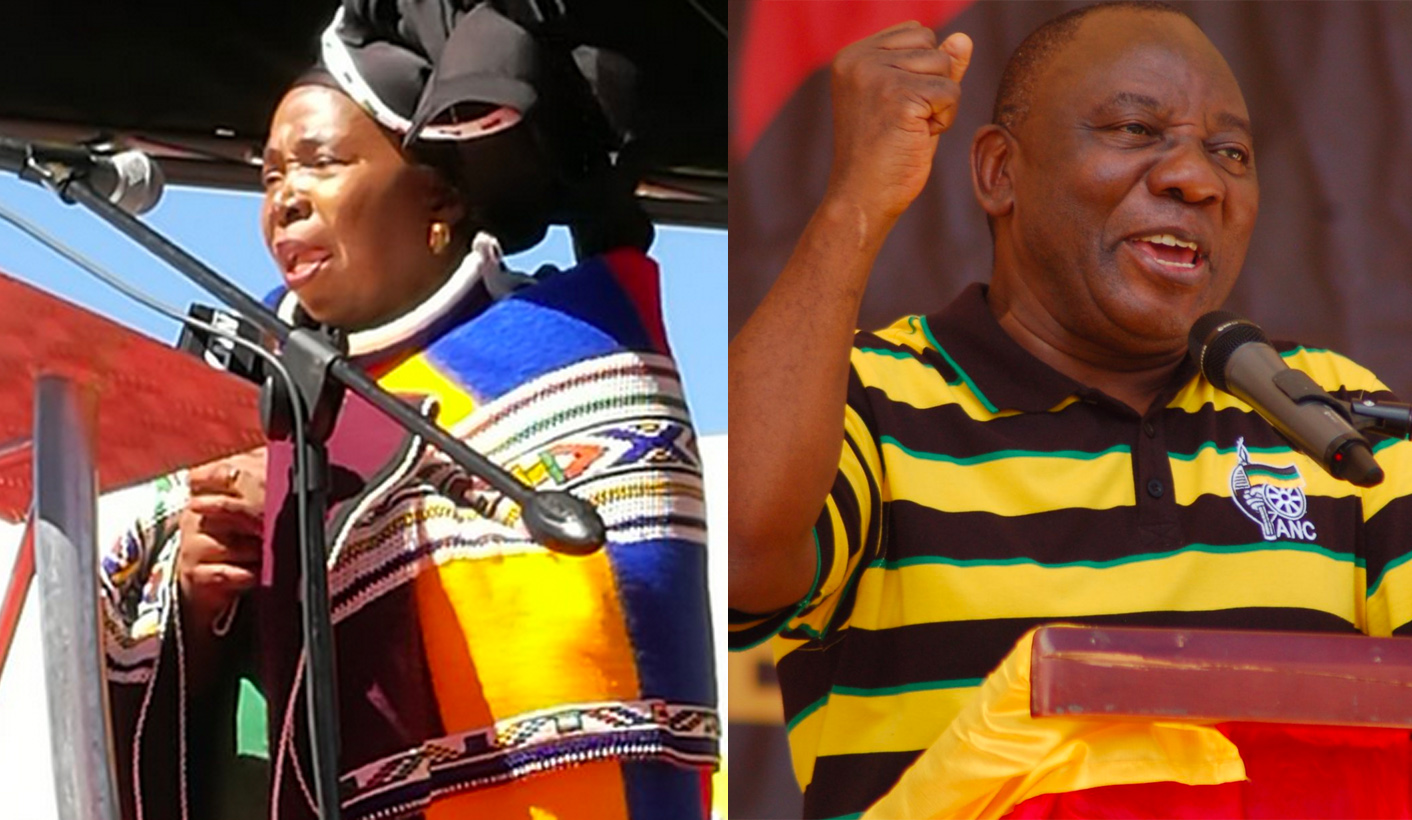 The ANC’s presidential battle will soon come to a head in Mpumalanga, the ANC’s second largest province and possibly the most important in determining which way the vote at the party’s December conference will go. While it’s still not officially clear where ANC chairperson and provincial premier David Mabuza’s loyalties lie, the rest of the provincial leaders have made no secret about their preference for a woman president. By CARIEN DU PLESSIS.

Outside an ANC Women’s League rally to launch its Molo Makhelwane (“hello neighbour”) campaign to “deepen unity” in KwaMhlanga, many in attendance appeared to support ANC MP Nkosazana Dlamini Zuma for president – but a surprising number didn’t.

This was strange, seeing that Dlamini Zuma was the main act at the gathering. Not that she gave a rousing speech – it was all of 15 minutes long and preceded by a raft of speeches by, among others, ANC Youth League leader Collen Maine, ANC Women’s League leader Bathabile Dlamini, ANC deputy secretary general Jessie Duarte, and singer Kelly Khumalo. (Strutting around in what looked like a canary yellow swimming costume, a soft canary yellow gown and high heels, Khumalo was possibly the most exciting act of the day.)

For the rest, the couple of thousand people that filled the stadium’s pavilion, mainly women, many in green ANC Women’s League uniform, were restless and hot.

Dlamini Zuma herself sat on a stage set up on the field in the Solomon Mahlangu Stadium, wrapped in thick Ndebele blankets despite the searing midday heat in the town known as the spiritual home of the Ndebele tribe.

Saturday, the day of the rally, was her second in the province, as the day before was spent meeting – and wooing – local and traditional leaders.

Mabuza himself was said to have been on a trip out of the province on business.

Nkangala, in the west of Mpumalanga and bordering on Gauteng, is the region where Deputy President Cyril Ramaphosa has his strongest support in the province. Ramaphosa himself, though, was in Nelspruit on the same day, where he reportedly packed the Nelspruit Rugby Stadium, saying that radical economic transformation needed corruption to be ended.

It was an SA Communist Party event – Ramaphosa has, in recent months, not been invited to the province by the ANC but by its alliance partners. Earlier this month he addressed a meeting organised by labour federation Cosatu.

A small group of his supporters wearing T-shirts with his #Siyavuma campaign slogan also gathered at what looked like a braai spot around the corner from the entrance to the Solomon Mahlangu stadium where Dlamini Zuma was campaigning. All through the rally, some dull, booming music noises came from that direction.

Outside the stadium a group of people with yellow T-shirts from the rally, rushing to get their transport back to Belfast, made their allegiance clear when asked why they wanted to see Dlamini Zuma as president. “Now, we are with CR!” one woman exclaimed. “It doesn’t matter what’s in the T-shirt, it matters what’s in the heart,” a male companion added.

For them the strongest consideration is the fact that Ramaphosa is deputy and there’s an established tradition in the party for the deputy to become president.

Another woman, a retired nurse from Moloto in KwaMhlanga, wearing her green Women’s League T-shirt, said she was there to “show support” – but not for Dlamini Zuma’s presidential bid.

She reckoned Dlamini Zuma was just a continuation of President Jacob Zuma’s rule, because she was still too close to him.

When asked whether she supported ANC chairperson David “DD” Mabuza’s call for a unity candidate, she said: “We are not bloody fools, just running after whatever leader!”

In the old days, she said, the ANC used to care about actual politics and had proper inductions for members, “but now they just want to rob”, referring to corruption and patronage networks. She said the ANC guidelines on the election of leaders, entitled “Through the Eye of the Needle”, was hardly being distributed in branches nowadays. “They just follow the leader, that is why we are always confused.”

One of her companions said his mind was changed by the meeting – from supporting Ramaphosa to supporting Dlamini Zuma.

He said he was now convinced that she was the more capable in terms of what she did in government.

A sangoma, in traditional Ndebele clothes, said she didn’t mind who was president, but she thought Dlamini Zuma could help people create jobs for themselves. “People shouldn’t wait for the government to give them jobs, they should take help from government to create their own jobs,” she said.

Co-operatives was one of the ways this could happen.

During the rally, Dlamini Zuma handed over sewing machines to co-operatives.

Another woman waiting in the stadium complained that their food hadn’t arrived yet. Those who were bused in with the fleet of buses parked outside the stadium entrance appeared to have received pap and stew after the rally – which would explain why the stands cleared out fast.

Dlamini Zuma in her speech touched on unity. She said those who lost in the ANC leadership elections should work together with the candidate that is elected to move the party forward. Judging from the response she gave to The Sunday Independent in an exclusive interview afterwards, she doesn’t expect to be the loser.

Meanwhile, Mabuza’s work of negotiating for unity – an uncontested conference where leaders are decided by consensus – is continuing. Gauteng ANC chairperson Paul Mashatile, North West premier and ANC chairperson Supra Mahumapelo and his Free State counterpart Ace Magashule attended a provincial meeting on this matter two months ago and are reportedly still in on this project.

City Press, however, reported that at least one branch, in Mbombela, has launched a formal complaint against Mabuza’s unity “directive”, which had branches write the word “unity” on nomination forms rather than the names of possible candidates. Regions and the provincial executive committee have resolved that Mabuza himself should be a candidate for deputy president.

ANC MP Fish Mahlalela, Ramaphosa’s campaign convener in the province, and Energy Minister David Mahlobo, a loyalist to President Jacob Zuma, are both in that branch.

Mabuza’s position on things might be clearer by next weekend, when Maine promised that Dlamini Zuma would be back in Mbombela Stadium. This also coincides with a planned provincial rally, and possibly – although this has to be confirmed – a provincial general council.

Ramaphosa’s invitation to this is likely to go missing in the post. DM

Photo: (Left) Nkosazana Dlamini Zuma in KwaMhlanga; (right) Cyril Ramaphosa in Nelspruit, both on Saturday, 18 November 2017 (both photos from Twitter)