Out, Hlaudi & Proud: ‘I perform miracles wherever I am’ 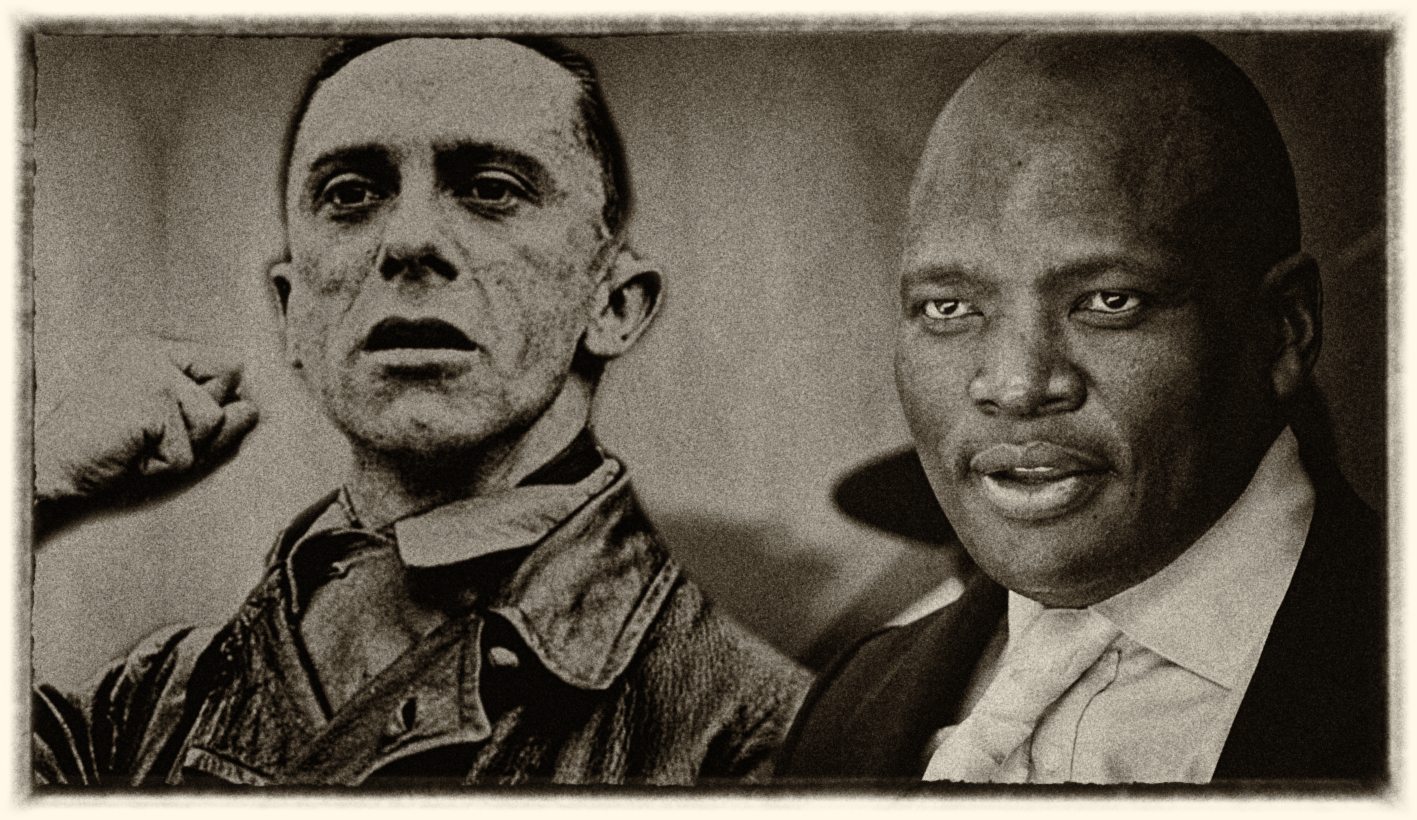 Hlaudi Motsoeneng is special. Special, special, special. Special like no one else. It’s not just the chutzpah, the arrogance, the thick skin, the divinity which he ascribes to himself. It takes a special kind of person to get the Public Protector, the ANC, the DA and the Presidency to all agree that they don’t like you. And then to emerge out of it laughing, winking, cracking jokes, stealing funerals. He is, in some ways, the worst that we as South Africa have to offer in the Zuma era. And that’s before we even start on the “concerned citizen” brought in to bolster his legal case. Who is a fugitive from the US. Folks, I’m not Richard Poplak. But what you are about to read may just completely and utterly warp your sense of reality. By STEPHEN GROOTES.

I cannot count the number of times I’ve been to a press conference at Auckland Park. It’s a building I know well (okay, I should admit this, but please, don’t tell anyone. I once worked at the SABC. In 1997. As a student, and then as a paid “ordinary employee” for all of two months.). Over the years, its relationship with reality, with political gravity, with the rest of us, has grown more and more detached. There was the time when Dali Mpofu came in laughing, as he was walking out with R11-million. The time the entire SABC board sat in the front row of a theatre, simply because President Jacob Zuma was speaking there. Last time I was there, Frans Matlala was being appointed CEO. And we still don’t really know exactly which black hole swallowed him up.

This time, as Hlaudi waltzed in (he has become a single celebrity, like Madonna), it was the fashion accessory that showed us we are now in someone else’s orbit. It was a little grey fedora. Why, oh why, you ask yourself. Has he spent too much time with those “local artists” lately? Does he think Bheki Cele is cool? Or did he just lose a bet?

Eventually, after a bit of waffle and the whole bit, the chair of the SABC, Professor Mbulaheni Maguvhe got up to speak. In case you watched it on TV, I should just mention that he is blind, and there is, in most societies including ours, a certain protocol for blind people. In this case, quite rightly, he sat closest to the podium, was guided to his seat and so on. took a little while to tell us what was as clear as Hlaudi’s taste in fedoras. That Hlaudi was staying on. Then came the detail, the , the detour around the law, the ANC and the Presidency. Hlaudi, you see, would no longer be Chief Operating Officer, but he would go back to his former position, as Group Executive for Corporate Affairs.

Okay then. I’m sure the ANC and the Presidency and the DA and the Public Protector will sit back and think, “Of course, that’s okay! he can do that job. Nothing to see here anymore, let’s all move along.”

Then, the acting Chief Group Chief Executive Officer of the SABC (everyone at the SABC acts, but you already knew their flair for cheap drama), James Aguma, took his turn. He explained how seriously the SABC takes the law. How seriously it takes the Public Finance Management Act.

Then, himself. It was a quote a minute, unprompted, unscripted, incredible, insane.

“I want to applaud the people who recognise this wonderful person called Hlaudi,” was the start. Then, “Everywhere I go everyone supports Hlaudi, it’s worse in the rural areas. I’m here in Gauteng to change the mindset people who believe if you come from rural areas you can’t achieve.” Then, “You are going to know about this position, corporate affairs. It is going to be funny, I’m going to enjoy that position.”

If anyone else in our public life had said this, we would have started to be concerned. We would have reached for Google to find out what mental health facilities are available nearby. But this is not for a or a shrink. It’s a job for a priest. Because, Hlaudi you is divine.

You heard it here first, folks. Hlaudi Motsoeneng is immortal. Soon he will be turning water into wine.

And the SABC really is very lucky. Because Hlaudi is “going to re-apply” for his old job back, to become, once again, the Chief Operating Officer of the SABC. Well, with someone this divine in this position, presumably Jesus will now take his leave of Tshwane, Joburg and Nelson Mandela Bay.

But the lunacy was not over yet. Even by the standards of the SABC, this was farce dressed up as but playing out as .

Then came a presentation introduced to us assembled hacks as from a “concerned citizen”, a person with legal knowledge, who wanted to provide us with his own interpretation of the Judge Dennis Davis ruling. It was about the Latin of the law, how we should all respect it, and how poor old has been ill-treated. As, don’t forget, was the Messiah.

The name of this “concerned citizen” is Paul Ngobeni. Now, Ngobeni has a back story. We’ve had some shady legal people in our time. A judge who got drunk and drove through a wall, senior advocates who took hundreds of thousands of rand from accident victims, the awful attorney Ronald Bobroff who has scarpered off to Australia.

Ngobeni tops them all. Not in his knowledge of the law. In the fact that he is actually on the run from the law. Uniquely among all of my experience, Ngobeni passes himself off as a legal expert (from time to time on the SABC) but he is a fugitive from US law. Now, you may ask yourself, how can I be sure of this. It’s simple, based on the information I recalled from a story I did on him seven years ago. If you search for the words “Paul Ngobeni Bail Bonds”, you’ll get this: the site, the image, the warning “Do not try to apprehend this individual.” In other words, confirmation that my memory was accurate.

Now, gentle reader, I realise that I do have at times a combative and that I can be a little difficult at press conferences. But this crosses a line. I could not stomach the sight of this man lecturing me about the interpretation of the law while being a wanted criminal. When question time came, I put it less than gently following other questions around Hlaudi:

“And for Mr Ngobeni, your name is still on the list of those wanted by authorities in the US… you are a wanted person in the US, can we presume you are the right person to give us a lecture on the law?”

For me, this was the only way to end this nonsense. You put up a person to say certain things in a press conference, you give him a certain legal weight, then the forum to end this is right there. It’s the only time you will have exactly the same audience as the one who heard him make the original comments.

And, to sound a little more like Richard Poplak for a moment, don’t fucking insult me. Did you think I’d forget that you’re a wanted felon? Did Hlaudi and Co not bother to google him first, before putting him in front of a group of journalists, who on your own version have an axe to grind? Or they just don’t give a crap?

And don’t just think it’s people like me. Ngobeni got fired by then Intelligence Minister Lindiwe Sisulu for writing a letter claiming Trevor Manuel thought he was the “king of coloureds” and supporting Mzwanele (Jimmy) after his “over-concentration of coloureds in the Western Cape” comment. Ngobeni had made a foolish, foolish error. He’d forgotten who the father of Lindiwe Sisulu was. And the fact that he was not classified as black under apartheid.

This is the kind of man we are now dealing with. And this is the man who was there to explain just how Hlaudi Motsoeneng is a hero, and a High Court Judge was, well, the opposite.

Anyway, Ngobeni is a side-show, who has a right to remain as “concerned” as he likes. Let’s hope he plays no further role in this, or anything else of substance in South Africa these days.

But this drama is nowhere near over. When asked who made the decision to re-appoint Hlaudi, says it was him, and other people on his managerial level. In other words, the board had nothing to do with this, and neither did the Communications Minister, Faith Muthambi. This is a case of sending the responsibility lower down the food chain. This means the board and Muthambi can claim to the Presidency and the ANC that they have clean hands. It’s more bullshit. The rest of the country can clearly see through it, but it’s also unlikely to wash at Luthuli House

And so, gentle reader, it is time to draw the curtains, to slowly leave the gravitational well of Auckland Park, and slowly make our way back to where the rule of law matters, and up is not down, and Hlaudi is not divine. But there is one thing you will still want to know. Did Hlaudi get that massive bonus that was reported on over the weekend? He was asked that question. His answer?

There is something else that makes Hlaudi The Special One. The Arrogance. DM