Analysis: ANC Leadership Race – still not about hearts and minds, but political alignments and vested interests 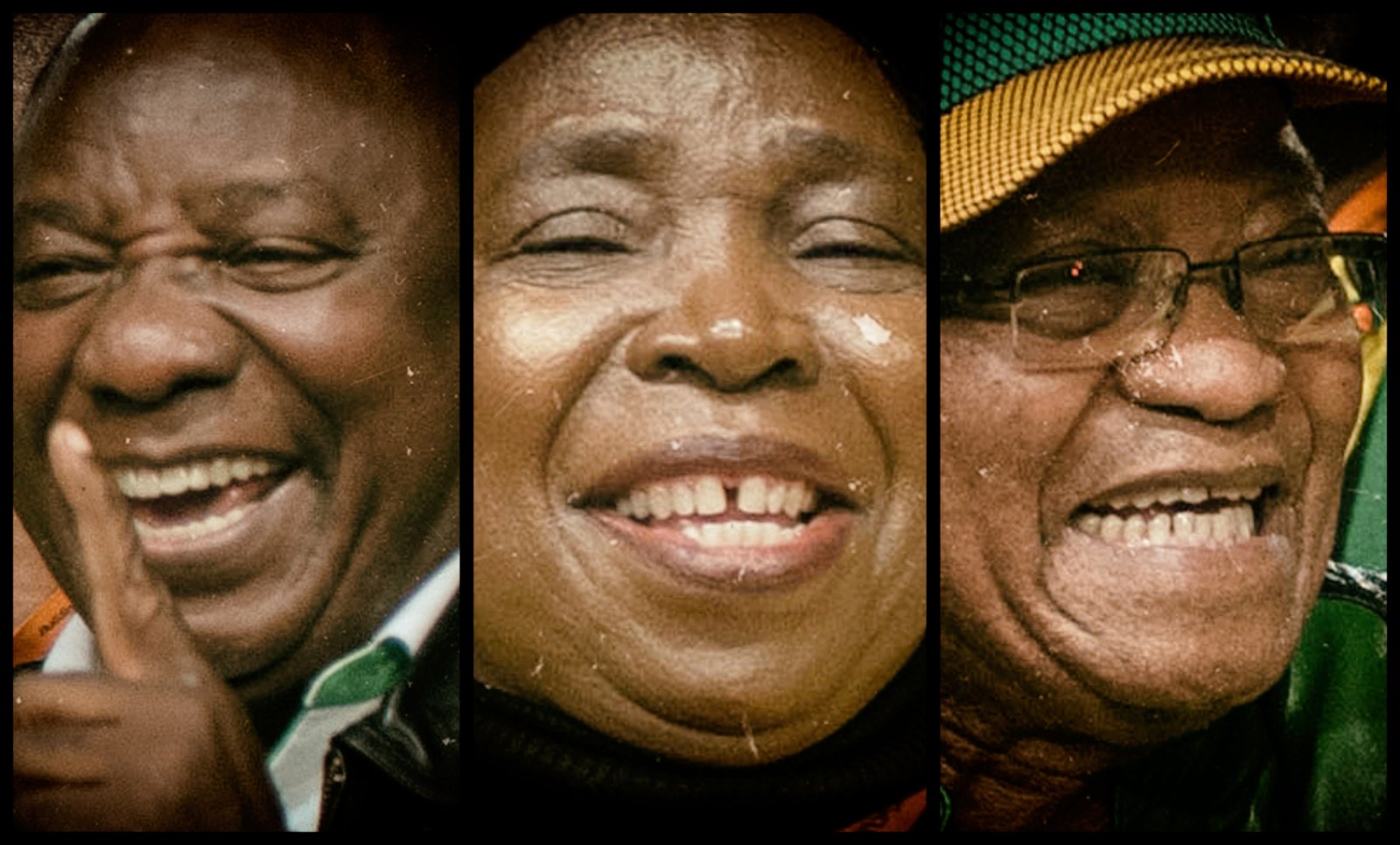 The once bullet-proof road to the Presidency through the ANC is a tussle between two completely separate political mechanisms. To win the ANC’s leadership battle one of them needs to win the battle of organisation: more branch leaderships need to be won, more regional and provincial leaders must offer support, than the other contenders. But to win out in the end, in an election, you need to also have some popularity with the actual voters, you have to be acceptable to them. More revelations over the weekend of even more scandals to hit President Jacob Zuma, and, at the same time, the release of more data about potential voters’ wishes, shines a strong light onto the race. By STEPHEN GROOTES.

The headline in the Sunday Times was simple. “Gangster Republic”. It contained claims that Nkosazana Dlamini Zuma’s ANC leadership campaign is being funded by a “self-confessed smuggler, fraudster and money launderer”, that Zuma himself didn’t submit tax returns for over five years, and that he essentially had links to organised crime.

Even in a country as scandal-weary as this one, these claims are serious. They come from a new book published this week called “The President’s Keepers”, by the investigative journalist Jacques Pauw. Pauw is one of those investigative journalists that legends are made of. His work in uncovering the apartheid hit squads was incredibly important, and led to the book Into the Heart of Darkness: Confessions of Apartheid’s Assassins. His background, in helping to start the anti-apartheid newspaper, Vrye Weekblad, also makes it difficult to attack him politically. The man who uncovered the awfulness of the apartheid regime is now uncovering evidence of criminality against Zuma.

The claims that have been published so far against Zuma, and Dlamini Zuma, are very detailed. They rely on affidavits and multiple sources. They also appear to explain the motivations behind the full-scale attack on SARS, and the people who were ultimately responsible for it, including former Finance Minister Pravin Gordhan. Pauw says that Zuma simply refused to file a tax return for five years, and that he actually owed SARS around R63-million. At the same time, there is a revelation about a plane landing at King Shaka International Airport containing a full mobile clinic, and a massive amount of cash. When SARS impounded the flight, then Intelligence Minister (and ex-husband to a drugs dealer) Siyabonga Cwele intervened, taking over the situation, and pushing SARS out. In the end, the clinic was set up at Nkandla. Of course, what happened to the cash is not known.

Then there are the claims that Zuma has been associating with known gang leaders, and people who appear to run criminal enterprises, such as Glenn Agliotti.

In short, the claims give the impression that Zuma is simply a gangster who uses politics to get ahead. Coming at such a crucial time, it is important then to ask how this could influence the ANC’s election: will the dial be moved away from Zuma and his declared preferred candidate, his former wife Dlamini Zuma?

It is important at this point to understand that the ANC leadership race is not a contest for the hearts and minds of branches or delegates, but really a competition of organisation. In other words, it’s about controlling the delegates who actually are accredited at the conference, and controlling the branches which send them. In a sense then, it’s really the political machine of Zuma against the political machine of Deputy President Cyril Ramaphosa (almost certainly aided by one Gwede Mantashe).

And of course, Nkosazana Dlamini Zuma is going to say, again and again, that she is not Jacob Zuma, that she is not tied to him, and to refer to her as “Zuma’s ex-wife” is plain sexist. The problem of course is that it is clear that the two of them are parts of the same political unit. She is supported by the same people who support him, appears to be pushing the same agenda, and has so far refused to speak out against State Capture, the Guptas, or any of the other scandals that have erupted around her former husband. She is also reluctant to engage in media interviews where she could face critical questions, or any kind of interrogatory inquiries.

And while she may well claim, loudly, through the likes of the ANC Women’s League, that none of the criminal allegations around Zuma relate to her, this might not necessarily be true. Pauw claims that Dlamini Zuma has accepted donations for her campaign from a man called Adriano Mazzotti. And he has signed an affidavit in which he explains how he was involved in fraud, money laundering, corruption, tax evasion and bribery. Mazzotti is one of the key figures in Pauw’s explosive claims against Zuma. To make matters worse for her, she appears to have failed to listen to a warning from the State Security Agency against getting close to him, on the basis that he had not been convicted of any crime. (A defence that seems to run in the family.)

In short, she must surely bear some complicity for what has happened around SARS, and has failed to keep her own nose clean.

However, one of the consequences of being part of the same political unit as Zuma is that there is very little that can actually affect people’s views of her. In the ANC, you either support Zuma and almost automatically Dlamini Zuma, or you are opposed to them and want Ramaphosa or even Zweli Mkhize to take over. And nothing is going to shake that view. You are either part of that network (which often involves patronage) or you are not. This does nothing to alter the control that Free State Premier Ace Mageshule may have over delegates from the Free State, for example, or change the political calculus for someone like Mpumalanga Premier David Mabuza, who may now actually decide this contest.

But that does not mean that Pauw’s revelations are not significant. They could actually have a huge impact over the longer-term, post-ANC presidential race.

While winning the ANC presidency is about control of that internal apparatus, it is well-known, from evidence here and other democracies, that the leader of a political party matters. It is one of the biggest weaknesses of those who argue for a change to constituency democracy (where people are elected members of Parliament to represent a certain geographic area, as in the UK for example) that many people make their decisions about how to vote based on the leaders of parties. (This is why so much was made of the change from Helen Zille to Mmusi Maimane in the DA.)

On Sunday City Press featured a piece by Wits School of Governance head Professor David Everatt and doctoral student Ross Jennings about how a choice of Dlamini Zuma as leader of the ANC could influence the 2019 elections. Quoting from the SA Citizens Survey, they point out that Dlamini Zuma has a very low rating among voters. Respondents were not asked which party they would vote for, but only who should be the next leader of the ANC. Of those asked, 46% said Ramaphosa, while only 16% said Dlamini Zuma. Ramaphosa is way ahead in every province except for KwaZulu-Natal. And, interestingly, the survey also says that there is not much of a difference between urban areas and rural areas, which could put to bed some claims about how people in rural areas behave differently politically to those of us in the urban bubble.

To make things worse for Dlamini Zuma, Everatt and Jennings suggest that she also has a strong “repellent factor” and that one in three black voters said they would be “much” or “somewhat” less likely to vote for the party if she became leader.

It is this kind of data that could start to move the needle within the ANC. There must be people who, while their main aim might be to have Zuma or Dlamini Zuma in power, realise that it actually cannot be done. That for the benefit of their own skins they have to consider picking someone who has a better chance of leading the ANC to victory in 2019.

However, it must not be forgotten how low the image of the ANC itself could be in many quarters. If it is not the grand corruption of Zuma and State Capture that is in the headlines, it is the horror of the Esidimeni Scandal, and the lies of former Gauteng Health MEC Qedani Mahlangu. And if it is not that, it is the image of Social Development Minister Bathabile Dlamini playing games with Parliament and refusing to comply with a court judgment about the social grant payment system. In other words, whoever takes over is going to be in control of a party that sometimes looks like it is simply about to fall over from the sheer weight of the corruption within it.

If there is one thing that the political opponents of the ANC are going to cry in 2019, it is that it is the ANC that has created a situation in which a newspaper can run the simple headline, “Gangster Republic”, and everyone would know what they meant with it. DM