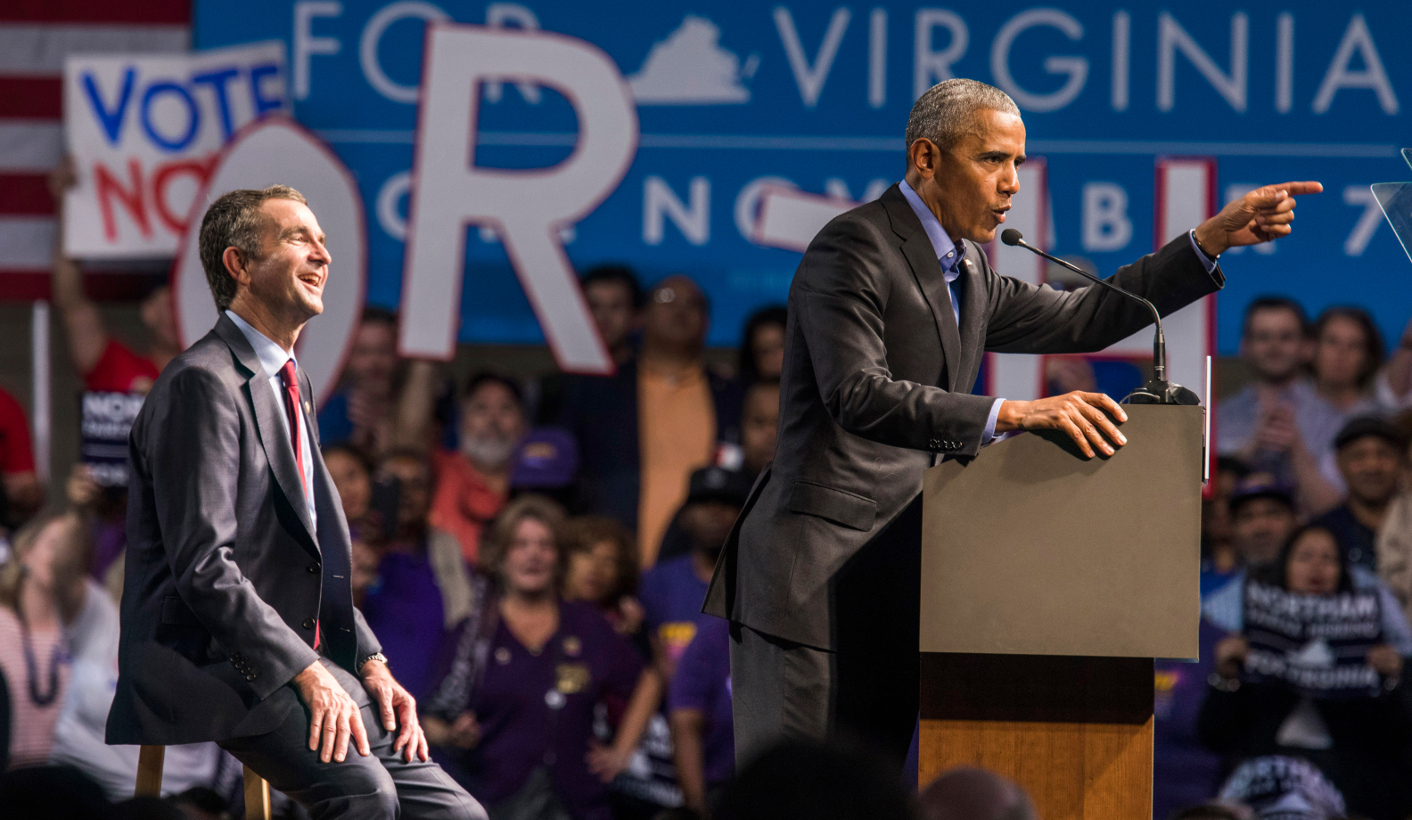 The blue wave that swept Virginia’s election last Tuesday has energised beat down Democrats and given some Republicans pause. But what does it really mean? Should Liberals dare to dream? By JONATHAN FAULL.

Donald Trump’s seemingly improbable election sullied many reputations, but perhaps none more so devastatingly than those of professional pollsters and the Democratic establishment. With the first anniversary of the Narcissist-in-Chief’s ascent coinciding almost perfectly with state-wide elections in purple Virginia, blue donkeys and opinion diviners sought mutual vindication.

Throughout the campaign pollsters predicted a close, but clear, victory for Northam. Their bet seemed an obvious one: Hillary Clinton had carried the state by five percentage points in last year’s presidential palaver; Democrats had won three of the last four governor’s races; and Democratic Party representatives dominated state-wide elected office, holding both of the state’s seats in the US Senate, the office of Attorney General, and Northam’s Lieutenant Governorship.

Down ballot, heavily gerrymandered districts all but guaranteed continued Republican dominance of the Virginian state house. A historically diverse Democratic ticket stoked the fires of progressive politicos, but the wholesale election of black, brown, female and transgender candidates to solidly red seats seemed fanciful, if not downright delusional.

Gillespie initially put out a GOP campaign from the days of Reagan/Bush yore: cut taxes, inevitably boost the economy, government is bad and must be eviscerated… yada yada. Failing to stoke any fire in the belly of the Republican base, Gillespie went full American carnage in the final weeks of the campaign, running a relentless series of ads predicting that a Northam victory would usher in hellfire at the hands of child molesters and MS13 Salvadorian gangsters, and the wholesale destruction of “our” heritage (a dog-whistle for Confederate memorials and white supremacy).

Gillespie’s Bannonite tactics triggered panic among Democrats and pollsters alike. In the final week of the race, Real Clear Politics, the go-to poll tracker, reduced Northam’s edge to nil, designating the governor’s race as a toss-up. Even the high priests of poll whispering at Five Thirty Eight put Northam’s lead at 3%, uncomfortably within the margin of error. Phalanxes of volunteers moved through Northern Virginia’s suburbs to push out the vote.

The trauma of Donald Trump’s largely unheralded 2016 victory continues to dog the work of pollsters who dramatically over-read support for the Republican candidate. Ralph Northam, the man from Onancock, ultimately swept the carpetbagging Gillespie by 8.9% in a thunderous victory.

Further down the ballot, liberal voters brought their own carnage to long-standing Republican strongholds: Justin Fairfax, candidate for Lieutenant Governor, became only the second African-American to win state-wide office in a state where white supremacists gathered just months ago chanting “you will not replace us”; Danica Roem, a 33-year-old former journalist, displaced 13-term incumbent and self-styled “homophobe in chief”, Robert G Marshall, and in so doing became the first openly transgender candidate to be elected to office in the US; and Hala Ayala and Elizabeth Guzman – the latter an immigrant from Peru – made history as the first Latin candidates elected to the Virginia state house, both unseating GOP incumbents in the process.

Everywhere the blood on the floor was red: Not one contested Democratic seat was turned, yet 15 Republican seats were flipped. The gerrymandered, and seemingly impassable, 32-seat Republican majority in the state house has been reduced to two seats, and the dust is yet to settle on three races where provisional ballots will determine the final outcome.

Virginia was not the only good news Democrats received on the night. Phil Murphy pummelled the Republican incumbent Lieutenant Governor Kim Guadagno for the right to succeed Chris Christie as Governor of New Jersey. Dems also wiped the floor in Washington State and will assume control of all three branches of state government. To cap it all, two districts deep in the north-east, politically crimson hinterland of Georgia incomprehensively swung blue.

Elation would be an understatement. A discernible breeze passed through the Washington DC establishment in which I happened to find myself. The assembled throng first exhaled with relief, and then bellowed in absolution (95% of the DC vote accrued to Hillary Clinton in ’16).

The late-night analysts and morning headlines threw much shade on a historically unpopular president, who – as luck would have it – was conveniently abroad as the electoral pennies dropped. The diviners of political tea leaves foresee much GOP angst in the run up to next year’s critical mid-term elections. The 2018 election will re-frame the landscape for Trumpian rule, and in the event that Democrats win back the House of Representatives they will have the tools to unleash a multitude of investigations for sins both real and imagined.

Does Virginia herald the return of liberalism’s long march, or is it just another iteration of America’s perpetually cyclical ebb and flow? Purple Virginia may be, but can one, should one generalise?

A dispassionate reading of the results should induce a shoulder shrug and a meh. The party associated with an unpopular president lost in a state where Democrats have long been on the march. The suburbs that sprawl southwards from the Potomac and the DC/Virginia state line feasted on the government services contracts doled out through Obama’s stimulus package and have nurtured wealthy, ethnically diverse, and immigrant-heavy American utopias. It should not be altogether unsurprising that Gillespie’s xenophobic sabre-rattling and messaging about rust and tobacco belt economic decline manifestly failed to resonate.

Another vein of analysis suggests that if anything, Virginia only underlines the trends that propelled Trump to victory: a liberal urban core, and increasingly blue, white collared suburbia, unmoored from the bleak lived experiences and social values of hollowed out blue collar and rural economies. Dave “Mudcat” Saunders, a blue dog strategist who voted for Trump over Clinton, told the Washington Post that “the Democrats are just going after the heavily populated areas and the college graduates. All their wins… are in the new Virginia, where people moved to from out of state, and the party is saying the hell with the rest of the state”.

But for those active in grass roots politics on the left of the American political centre, Virginia offers both relief and vindication. The resistance is particularly active in contemporary swing states such as the Old Dominion. Their foot soldiers will draw enormous energy from the example of Virginia where the cosmopolitan carnage ran electoral riot. DM

Jonathan Faull is an independent political and policy analyst based in Washington DC. He holds degrees in politics and economics from the University of Cape Town, and a Masters in Public Policy from the Kennedy School at Harvard. In a previous life, Jonathan was a political researcher at Idasa where his work focused on South African elections, political strategy, and the politics of the Western Cape.