Zimbabwe: Army in control of state institutions, but insists not a coup 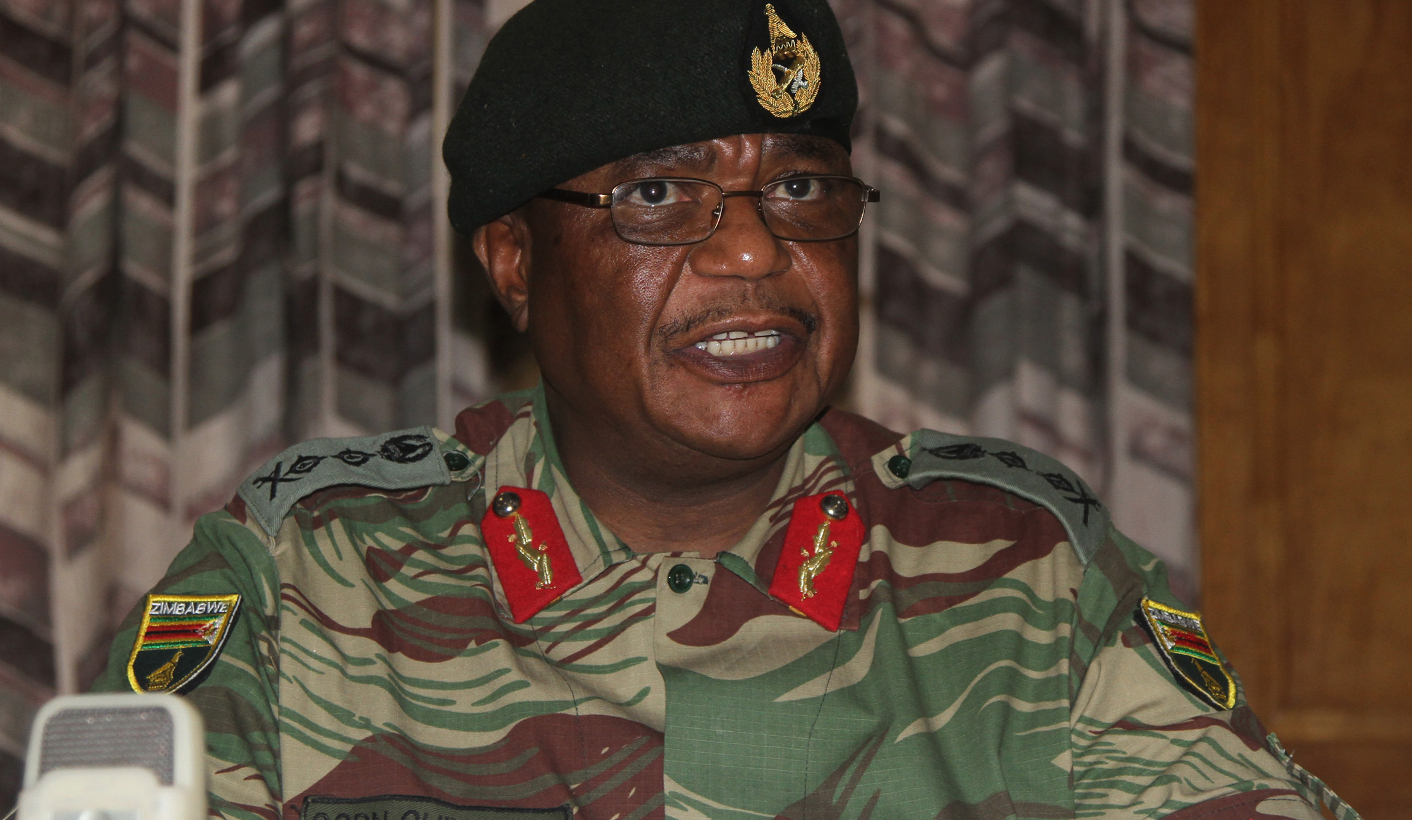 Zimbabweans have woken up to find the national broadcaster, Zimbabwe Broadcasting Corporation (ZBC), President Robert Mugabe's Harare offices and the Police Support Unit under military control. This follows an early morning statement by Army Chief of Staff Major General SB Moyo that the army's intention was to return to a dispensation that allowed investment, progress and development. By SALLY NYAKANYANGA, PETER FABRICIUS and AFP.

“We wish to assure the nation that his Excellency the President of Zimbabwe and Commander in Chief of the Zimbabwe Defence Forces Robert Mugabe and his family are safe and sound and their security is guaranteed. We are only targeting criminals around him who are committing crimes that are causing social and economic suffering in the country in order to bring them to justice,” army Chief of Staff, Major General SB Moyo said during an announcement on state television during the early hours of Wednesday.

“To both our people and the world beyond our borders, we wish to make it abundantly clear that this is not a military takeover of government, what the Zimbabwe Defence Forces is doing is to pacify a degenerating political, social and economic situation in our country, which if not addressed may result in violent conflict,” Moyo said. “As soon as we have accomplished our mission we expect that the situation will return to normalcy.”

Moyo, who called on all Zimbabwe Defence Force personnel currently on leave to return to barracks “with immediate effect”, said the army was targeting members of the ruling party around Mugabe, who are bent on destroying what had been fought for. But, he said, “this is not a military takeover of government”.

His comments follow that of military chief General Constantine Chiwenga’s public threat on Monday that the military would “step in” to stop Mugabe purging leaders of the liberation movement. This was a clear reference to vice-president Emmerson Mnangagwa, strongly supported by the military, whom Mugabe fired last week, apparently at the behest of his wife Grace.

Mnangagwa’s dismissal left Grace, 52, in prime position to succeed her husband as the next president – a succession strongly opposed by senior ranks in the military.

As the situation deteriorated overnight, prolonged gunfire was heard near Mugabe’s private residence.

The US embassy warned its citizens in the country to “shelter in place” due to “ongoing political uncertainty”.

Armoured vehicles in the capital alarmed residents as Chiwenga had warned of possible military intervention.

But in his statement, Moyo urged ordinary Zimbabweans to remain calm and “limit unnecessary” movement but said “we encourage those who are employed and those with essential business in the city to continue their normal activities as usual”.

Locals had mixed responses to the developments, with many concerned with what the future held.

“They are fighting on their own – as long as it will not come in our homes it’s fine,” said one young man.

“That’s the only way to a better Zimbabwe, there has to be conflict, no smooth transition will usher us to development. What do we expect if someone stays in power for the past 37 years, he is the only block to our development and democratic process,” said another.

From 4am, speeches from Chiwenga and Moyo have been read and military songs played on the regional broadcaster.

Reports, that Daily Maverick has been unable to independently verify, have emerged that Mugabe is negotiating for Grace to be allowed to leave the country before he steps down. In the event of that happening, the ousted Mnangagwa would act as president until the December congress.

Meanwhile, the South African government appears to have been caught off guard.

Senior officials were saying  late on Tuesday night that they did not believe a coup was unfolding and so would not intervene to prevent one.

Even on Wednesday morning after Moyo had gone on the air, Clayson Monyela, spokesperson for South Africa’s Department of International Relations and Co-operation, was down downplaying the huge implications of the events in Zimbabwe, implying to Radio 702 that nothing had essentially changed.

But he said Pretoria would consider mediating in the situation in South Africa’s troubled northern neighbour if necessary.

The Zimbabwe military had taken power early on Wednesday morning and began to round up Mnangagwa’s  political opponents. The claim that this was not in fact a coup was clearly a fig leaf to avoid negative reaction. A senior South African official had warned on Tuesday night that Zimbabwe faced expulsion from both the Southern African Development Community (SADC) and the African Union (AU) if its government was toppled in a coup.

President Jacob Zuma, on behalf of SADC, released a statement later on Wednesday noting the situation.

Zuma called for calm and restraint and expressed “hope that developments in Zimbabwe would not lead to unconstitutional changes of Government as that would be contrary to both SADC and African Union positions”.

It was clear that the military was reacting to Mugabe’s firing of vice-president Emmerson Mnangagwa last week. He headed the so-called Lacoste faction which was opposed to the “G40” faction, which was headed by Mugabe’s wife Grace.

There were unconfirmed reports on Wednesday morning  that Finance Minister Ignatius Chombo, a prominent member of the “G40” faction had been arrested and also that one of his bodyguards had been shot trying to protect him. Mugabe appointed Chombo to the key finance ministry just weeks ago, replacing Patrick Chinamasa, a prominent Mnangagwa supporter.

Higher Education Minister Jonathan Moyo, another prominent member of the G40 faction, is also widely believed to be in the firing line of the coup leaders.

On Wednesday morning opposition Senator David Coltart – who has been warning of an impending coup for several days – said the situation was still not completely clear.

But he said it was clear that the Mnangagwa faction in the military was in charge as the ZBC – which had refused to carry Chiwenga’s warning on Monday – was broadcasting it on Wednesday, hours after broadcasting Major General Moyo’s statement.

The ZBC was also constantly playing chimarenga — liberation war music – he said, another indication that the military was in control. “And if they control the ZBC, they control the country,” he said.

Coltart said he was not surprised that the coup leaders had guaranteed the safety of Mugabe and his family as it would undermine their cause to harm him because of his continuing popularity.

“Their line is that the old man has been influenced by criminals around him and so, as they said, they are merely ‘pacifying’ the situation.”

Coltart had said before the coup that many would gloat if Mugabe were ousted by the military but they might come to regret it as there was no guarantee that the military would relinquish power once its work had been done, as Major-General Moyo seemed to be suggesting.

However Coltart said  he still hoped that democracy would be restored. He was encouraged by Major-General Moyo’s assurances to Members of Parliament that they should continue their work.

One scenario he thought logical was that the military would force Mugabe to step down as ruling ZanuPF leader at the party’s congress next month, and allow a free and fair election for a successor. The military would probably assume  that Mnangagwa would win that election.

He would then become ZanuPF’s candidate for next year’s national election by which time Mugabe would also step down as national president.

However  Derek Matyszak, Senior Researcher for the Institute for security Studies in Pretoria, believes the military will give Mugabe shorter shrift.

“I think Mugabe will be told to re-appoint ED  (Mnangagwa) as VP, have him act for five minutes and then be told to hop it, with his good wife.”

“The government’s silence on the military deployments seem to confirm that President Mugabe has lost control of the situation,” Robert Besseling, of the London-based EXX Africa risk consultancy, said.

“Any coup would be likely to involve the imposition of a curfew.

“The main indicator of a broader outbreak of violence would be the reaction of the Presidential Guard, which remains loyal to President Mugabe.”

The main opposition MDC party called for civilian rule to be protected.

“No one wants to see a coup… If the army takes over that will be undesirable. It will bring democracy to a halt,” shadow defence minister Gift Chimanikire, told AFP on Tuesday. DM

Photo: Zimbabwe National Army (ZNA) commander Constantine Chiwenga addresses a press conference at the army headquarters in Harare, Zimbabwe, 13 November 2017 (issued 15 November 2017). During the press conference Chiwenga called for an end to purges in the ruling Zimbabwe African National Union Patriotic Front (Zanu PF) adding that security forces will try to stop those who intend to destroy the party. The army seized the national broadcaster’s headquarters (ZBC) on 14 November night, to announce that President Robert Mugabe and his family were safe but without citing their whereabouts. The military denied it staged a coup d’etat. Photo: EPA-EFE/AARON UFUMELI