Parliament: Captured? ‘I do not take instructions from anybody’ – Lynne Brown 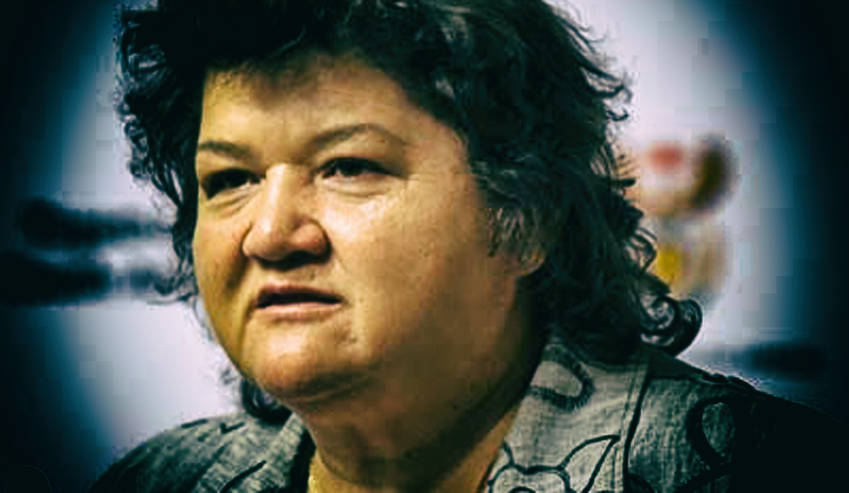 Public Enterprises Minister Lynne Brown on Tuesday took issue after being described as “captured” before Parliament’s inquiry into Eskom State Capture. The power utility’s board spokesperson Khulani Qoma, a reputation manager, argued that only the minister’s “captured-ness” could explain why she appointed board members and executives, who had been caught publicly lying and whose track record was littered with claims of dodgy behaviour. Brown’s response was to question the inquiry, saying that without distinguishing between hearsay and fact, “the inquiry takes the form of a kangaroo court intent on reaching pre-determined outcomes”. By MARIANNE MERTEN.

State Capture. It’s become part of the public discourse, be it in taverns or around the chattering classes’ dinner tables. For President Jacob Zuma, it doesn’t exist, at least not beyond the “political reasons” of detractors. “State Capture, that’s political propaganda,” the president said in Monday’s sweetheart interview with ANN7, adding later: “It’s not factual. It’s political.”

His argument went something like this: the state is made up of three spheres – Parliament, the executive and the judiciary – and anyone claiming State Capture means all are captured. But, said Zuma, Parliament was not captured, and neither was the executive.

After finally having conceded that he could not establish the much promised State Capture commission of inquiry until his court review of the public protector remedial action is finalised – this could be dragged out ad nauseum – Zuma, during his recent Q&A in the National Assembly, promised that once the court processes were done those calling for the commission would “regret” it. “We prove the liars and the truths. It is coming, my dear, don’t worry. It is coming,” Zuma replied to Cope MP Deirdre Carter. In response to an ANC follow-up question, he later added: “Those who are calling for it (a commission of inquiry) are going to regret. It is going to investigate corruption as long as citizen say this is what we want to be investigated.”

In the ANN7 interview, Zuma repeated this, saying the State Capture commission of inquiry “is going to be broader” and would look at corruption – wherever. Effectively, this could mean the commission’s terms of reference could be so broad as to render it ineffective. But first, said Zuma, the commission would have to determine a definition of State Capture.

But that’s exactly the political sophistry and mendaciousness that has paralysed so much and so many. State Capture has been an established term since around 2000. The World Bank and the International Monetary Fund (IMF) have used this term, initially with regards to the trends emerging in Russia, and the then new ex-Soviet republics, following the break-up of the Soviet Union.

Joel Hellman and Daniel Kaufmann, in their 2001 article “Confronting the Challenge of State Capture in Transition Economies” for the IMF’s quarterly magazine Finance and Development, argue that State Capture was “not merely a symptom, but also a fundamental cause of poor governance” – and that the complex interactions came at a high social cost. “In transition economies, corruption has taken on a new image – that of so-called oligarchs manipulating policy formation and even shaping the emerging rules of the game to their own very substantial advantage. We refer to this behavior as state capture… We define state capture as the efforts of firms to shape the laws, policies, and regulations of the state to their own advantage by providing illicit private gains to public officials.”

Last month the Financial Times’ David Pilling wrote that South Africa had become “State Capture central”, as the term no longer registered significantly outside the country, despite its initial reference to how oligarchs impacted on the newly minted ex-Soviet Union.

“State Capture is more systematic than plain vanilla (banknote-stuffed envelope) corruption, which seeks to exploit existing opportunities. State Capture goes one better by changing personnel, regulations and laws to work in one’s favour,” Pilling wrote with regards to a 2014 Transparency International report, which co-incidentally mentions the United States, Singapore and South Korea, but not South Africa.

Tuesday’s testimony of Eskom board spokesperson Khulani Qoma to the parliamentary public enterprises committee inquiry into State Capture at the power utility highlighted such complex interactions.

Earlier in 2017, then Eskom board chairperson Ben Ngubane had called a special board meeting to suspend interim CEO Matshela Koko. He had hit the media headlines claiming he did not know that his daughter with whom he shares a home had benefited from Eskom tenders, according to the Sunday Times. In an interview with Carte Blanche he had denied the Gupta-linked Tegeta was pre-paid for coal deliveries – until he was shown a document with his signature authorising that advance payment.

According to Qoma what unfolded was that Zethembe Khoza – he was later appointed by Brown as acting board chairperson following Ngubane’s resignation on 12 June – left the meeting to call “one of the G brothers”. Ultimately, Ngubane got a call from Brown not to act against Koko.

Qoma told the public enterprises inquiry he had this account confirmed by both Khoza, at a weekend meeting shortly after he was appointed acting Eskom board chairperson, and Ngubane, whom he met about a month after his resignation.

Eskom was in a reputational mess, he said, and neither Koko nor Anoj Singh was able to dispel the allegations, including trips to Dubai as highlighted in the #GuptaLeaks. “It’s clear that they knew they weren’t innocent. Where does that leave Eskom’s image? In the doldrums.” And even when Singh provided Brown with wrong information for a parliamentary reply on the deal McKinsey had with the Gupta-linked Trillian Capital Partners regarding Eskom, the minister did nothing.

The minister was captured, but pretended she was not, said Qoma: “Minister Brown has gone all out to say she’s not wet, yet she’s right in the middle of water.”

Afterwards Brown hit back. She already in two letters questioned the committee’s inquiry from its terms of references, logistics and witnesses. Acknowledging “the swirl of allegations” around State-owned Entities (SoEs), Brown on Tuesday instead argued that strengthening governance was a national imperative as these entities were key to the economy.

“Unless the parliamentary inquiry into allegations of malfeasance at State-owned Companies gives those who have been accused of wrongdoing the opportunity to explain their actions, it will serve no higher function than advancing political agendas and further undermining the economy,” the minister said in a statement. “By failing to subscribe to fundamental constitutional principles such as affording people the right to reply – or to distinguish between hearsay and factual evidence – the inquiry takes the form of a kangaroo court intent on reaching pre-determined outcomes.”

Reiterating that Eskom officials misled her and she had been promised action against those who did so, Brown added: “In conclusion, let me state unequivocally that I do not take instructions from anybody.”

Her statement followed a second bite of the cherry by Brown’s deputy Ben Martins who last week landed himself in hot water after calling a media briefing to dispel damaging testimony to the inquiry by suspended Eskom Company Secretary Suzanne Daniels. She had put him at a meeting with at least one of the Gupta brothers.

Martins last Thursday denied being part of such a “tea party”, but admitted he had met the Guptas on several occasions. One such was when he had invited then Passenger Rail Agency of South Africa (Prasa) board chairperson Sifiso Buthelezi, today Deputy Finance Minister, and Prasa CEO Lucky Montana to his home to discuss claims of pressure to remove certain board members at the behest of the Guptas. Montana later took to Twitter to point out that Duduzane Zuma and Rajesh Gupta also arrived at the meeting.

On Tuesday, Martins issued a statement that he, like his political boss Brown, questioned the parliamentary inquiry, accusing it of failing to uphold standards of fairness. While he did not label Daniels “a liar” and “clueless ignoramus”, as he did last week, Martins described her testimony as untruthful and untested.

The battle lines are drawn.

It’s not clear whether the minister and her deputy expect to be present at all times and be given the opportunity to respond there and then. Daily Maverick understands both are expected to be called to testify as part of the inquiry.

While in late June there was a parliamentary institutional directive to the public enterprises, home affairs, mineral resources and transport committees to urgently look into #GuptaLeaks claims and report back, only public enterprises is ploughing ahead.

The transport committee on Tuesday heard from Transport Minister Joe Maswanganyi, who last week told Parliament that Prasa would not submit its annual financial statements as they are not yet ready. These financials, alongside the annual report, are required no later than end of September by law. But there is the matter of R14-billion irregular expenditure related to various contracts. The minister assured the committee work was under way to implement the public protector’s remedial action regarding contracts identified in the Derailed report, while the National Treasury is also looking at various contracts.

The mineral resources committee had an engagement with its minister, Mosebenzi Zwane, a month ago – he took issue with having to answer what he called “media speculation” – and decided it would meet him again. This has yet to happen.

However, Parliament’s trade and industry will from January proceed with its own State Capture inquiry specifically focused on the Transnet Chinese locomotive R50-billion deal in which a Gupta-linked company received just over R5-billion in kickbacks. DA MP Dean MacPherson has welcomed the committee’s decision, saying it was worrying that the locomotives contract included no penalties to meet local content requirements – these are long established government policy – only late delivery penalties.

“There is no proof a single locomotive was made in South Africa,” MacPherson said, adding that the failure to pursue local content requirements in related industries was costing jobs – 700 of them in a Western Cape fabrics plant. Those jobs are being lost, in no small part, because the South African Bureau of Standards (SABS) is certifying Chinese fabrics, and with such stamp of approval the Chinese, not South African, fabrics are being used in outfitting rolling stock, he explained.

But that’s the thing with State Capture. It’s not about blatant brown envelope exchanges. It’s about the person appointed to a specific post, who then ticks the boxes of procurement and contract to facilitate lucrative benefits for some firms with political connectivity. In this way governance processes are hollowed out. DM