Theatre Review: Chance in the form of a suitcase

Theatre Review: Chance in the form of a suitcase 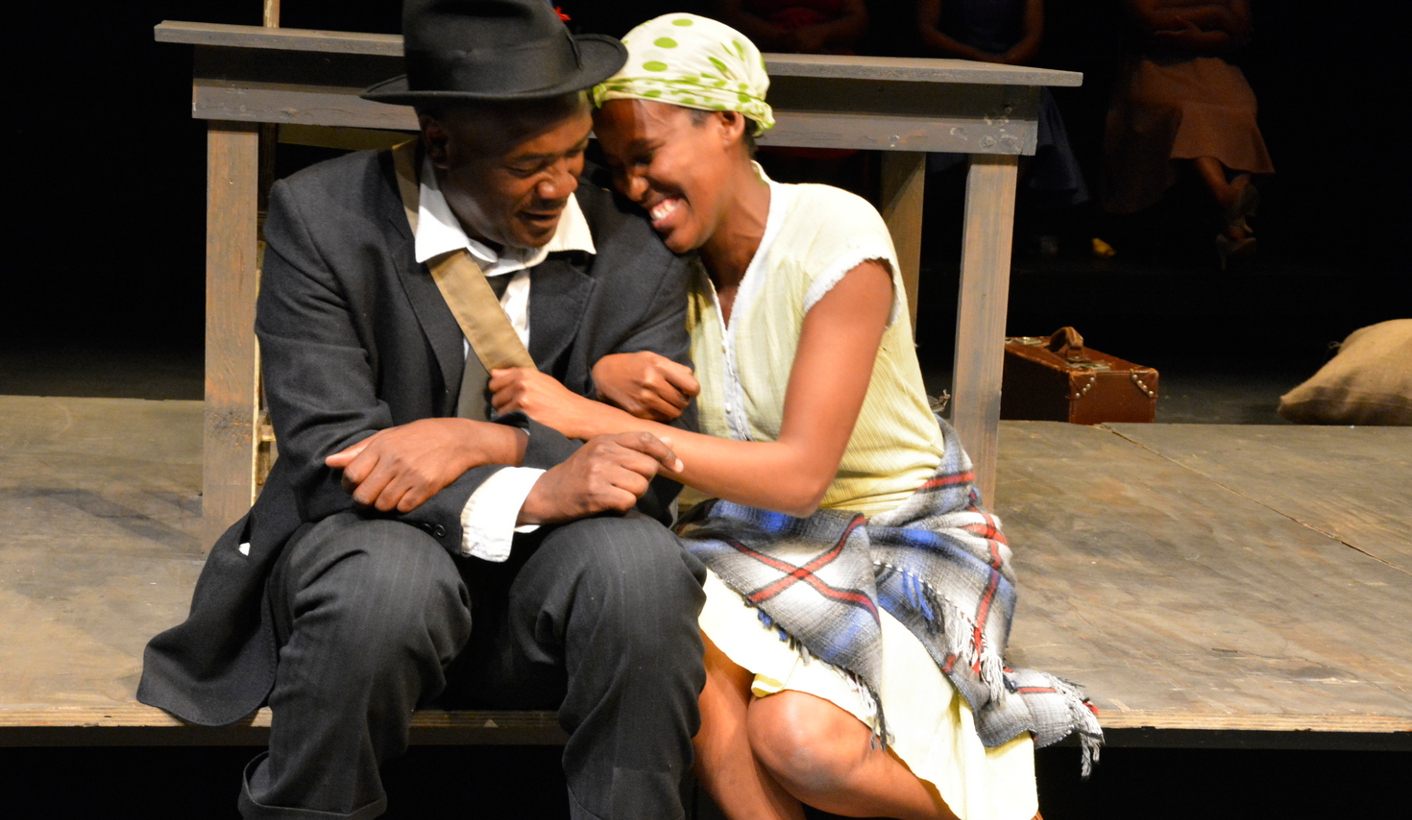 In The Suitcase, adapted from Es’Kia Mphahlele’s short story of the same title, and directed by James Ngcobo, one can’t help but feel that the actors and director have a keen insight into something profound, that they have an unspoken secret about this life. And much like most heartfelt subject matter, it can only be told with a simple story. By NKATEKO MABASA.

Timi, played by Siyabonga Thwala, is a cheerful and enthusiastic man who marries Namhla, played by Masasa Mbangeni. They live in a rural village and later elope to Johannesburg because their families disapprove of the union – simply because he is Zulu and she is Xhosa. Once in the city, they are enthralled by the big city lights and its high buildings. Unfamiliar with the fast pace city life they find themselves stranded at the train station not knowing where to go. Mlotswa, played by the humorous Desmond Dube, finds them and offers them a room to rent. And so as their lives seem to settle Timi must now look for a job.

The play, which is returning to the Market Theatre for the second time since 2006 and after a successful UK tour this year, is complete with three vocalists, a guitarist and narrators who carry the emotion of the play through Hugh Masekela’s jazz hits. With an almost full house, there were moments when the play had to pause until the audience stopped clapping for a brilliant performance by an actor or a wonderful rendition by a singer.

The audience is also entertained by the comical genius of Desmond Dube and John Lara, who narrate large parts of the play.

And yet the musicality, which was meant to enhance the play, often becomes overbearing. Characters break into song more often than is needed. True emotional moments are sacrificed for a joke or a song.

The play follows Timi as he enters the all too familiar routine in South African township life: leaving home in the early morning in search of a job only to come back at the end of the day with nothing but disappointed hopes. His wife, supportive and hopeful, tells him: “Tomorrow’s sun will rise” and for a time Timi is encouraged. But there is only so much disappointment that the human spirit can take before it breaks.

One of the most insidious things that apartheid South Africa has done to the black man is to breed in him a desire, nay a desperate and debilitating yearning, to be respected. Over months of being called boy or Jimmy, at every job post, Timi has grown indignant. But with a family to feed, his wife is now pregnant, pride must always play second fiddle to a hungry stomach. “One of these days he was going to take a chance,” the narrator said. And it was always Timi’s mantra to declare “many men had got rich by sheer naked chance”.

It was Soren Kiekegaard, the existential philosopher, who penned that “once despair makes itself known, however, it becomes apparent that the person was already in despair”. And such is Timi’s situation. And so chances did what chances do – presented themselves. Upon boarding a bus home, two women entered and sat next to Timi. One of them placed a suitcase between his leg and hers. When they disembarked the bus they left the suitcase. At this point Timi claimed, vehemently, to everyone in the bus that it was his. But what he found in the case later made him regret his choice, the desperate chance. DM

The Suitcase runs at the Market Theatre until 27 November