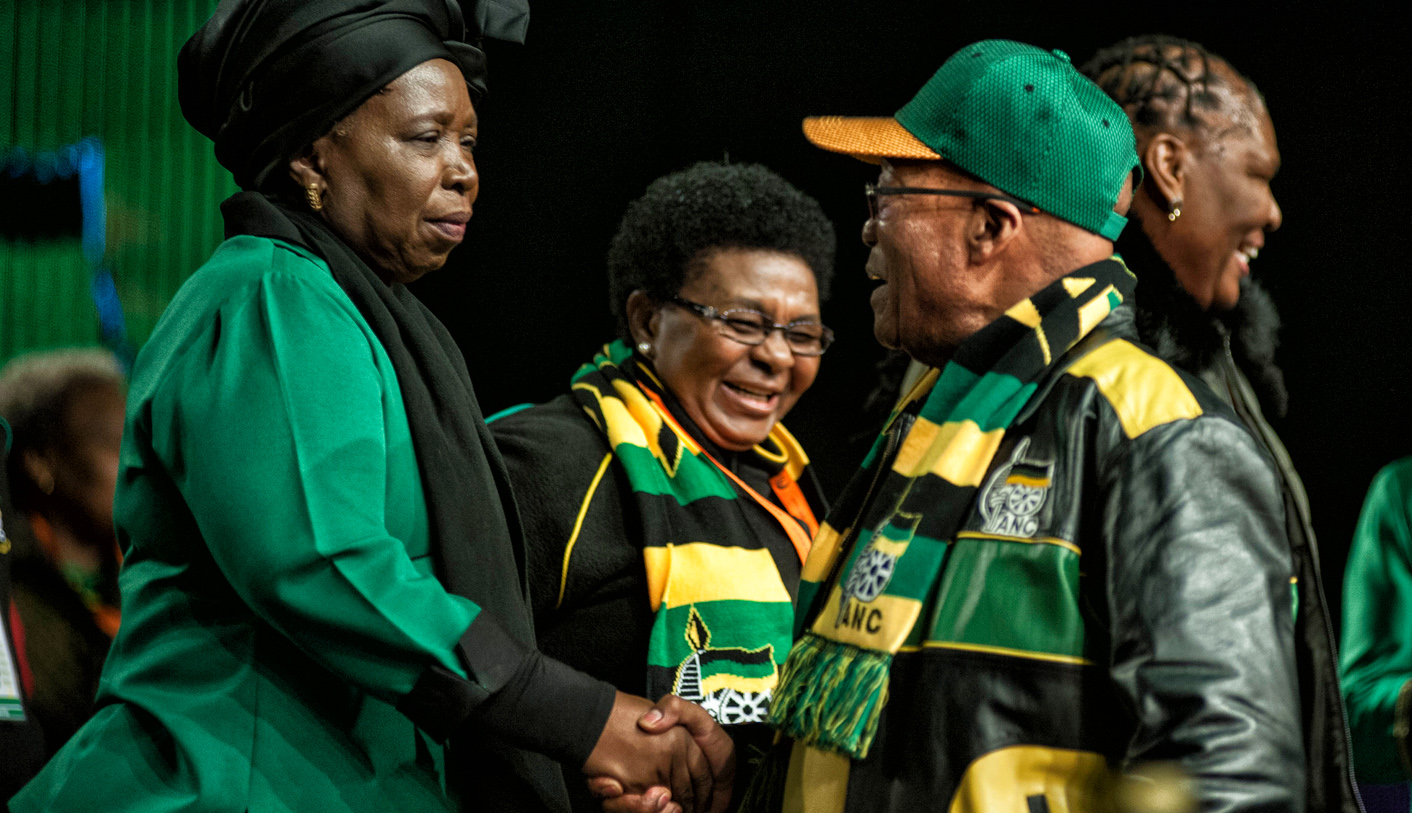 Supporters of ANC MP Nkosazana Dlamini Zuma’s presidential campaign have been fighting tooth and nail to keep control of the ANC’s largest province, KwaZulu-Natal. About a week ago they also bagged the prized – and somewhat coy – Mpumalanga, the second-largest province and the party’s kingmaker. Next they have set their sights on regaining the third in line, the ANC’s heartland of the Eastern Cape. By CARIEN DU PLESSIS.

They’re hardly the kind of images you’d expect in a report on the gathering of an organisation resolved to deepen unity. There’s a man in an ambulance, and a woman with five stitches closing a gash on top of her head, her yellow ANC T-shirt blood-stained.

It’s all part of a 29-page complaint on the party’s September conference, filed by 18 ANC members, among them provincial premier Phumulo Masualle. His signature is defiantly flanked by the word “chair”, his pre-conference position. Whether he still holds it is disputed.

At the recent provincial conference, in East London, the man once hailed as a unifier was contested by provincial secretary Oscar Mabuyane, who backs Deputy President Cyril Ramaphosa to take over from President Jacob Zuma. Masualle, despite apparent wavering, now seems to support ANC MP Nkosazana Dlamini Zuma, as do his supporters.

Mabuyane was elected chair after about 40% of the 1,700 delegates left the conference hall following the chair-throwing incident, and the remaining ones voted for him. The complainants claimed they weren’t allowed to return to the conference, while those on the other side claimed that the Masualle supporters had planned all along to retreat to the City Hall in a parallel gathering.

A report on the incident was referred to the ANC’s national executive committee by the national working committee, which held regional councils with the top five leaders of all the branches over the weekend.

They also watched a 30-minute video from the conference – the chair-throwers (apparently Mabuyane supporters) blame the bottle-throwers (the Masualle lot) for provoking them, and the video should provide clarity.

The complaints ranged from improper processes at branch level before the conference to questionable registration practices at the conference itself, and apparent bias from national leaders presiding over the conference. Fingers are pointed at Mabuyane and his supporters.

Ramaphosa, who spoke at the close, even pre-emptively apologised this week for calling the gathering a “festival of chairs”, even though his supporters didn’t see the need.

One of the complainants, (former) provincial spokesperson and MEC for rural development Mlibo Qoboshiyane, told Daily Maverick that the violence meant they wanted a re-run, and that this conference set a precedent for what was coming in December.

“They can’t be the victors of a war presiding with blood on their hands,” he said. “Those that perpetrated violence in a constitutional meeting of the ANC and they don’t see anything wrong with that, we are still going to a national conference [and that would be a problem],” he said. “What we expect from any meeting of the ANC is not to throw bottled water or chairs, but to throw ideas.”

Mabuyane could not be reached for comment, but one of his supporters claims the complainants had no constitutional ground to stand on, and were behaving factionally.

“They complain about the ‘festival of chairs’, what about the festival of bullets that they have up there?” he said, referring to the continuous killing of ANC leaders in neighbouring KwaZulu-Natal, Zuma and Dlamini Zuma’s home province.

There’s a fair chance that the complainants could find sympathy with the NEC, although it has thus far been increasingly less partial to Zuma (who prefers Dlamini Zuma as successor). If they succeed, the old leadership will be re-installed, or in the least some kind of compromise provincial task team would be appointed.

That would replace what is now a straight Ramaphosa slate.

The question, however, is, why the Dlamini Zuma camp is so keen on the Eastern Cape if it has already secured the two biggest provinces.

KwaZulu-Natal is the key campaign province for Dlamini Zuma, and they managed to stave off dissolution after a judgment declaring the 2015 conference, where the current leaders were elected, unlawful and void. The leaders strong-armed the NEC into allowing them to appeal the judgment, meaning that the provincial executive committee stays intact, possibly until the December conference.

In the second biggest province, Mpumalanga, premier DD Mabuza has apparently promised to drop his call for a unity candidate and support Dlamini Zuma.

“Mabuza turned at a caucus meeting on Thursday [last week],” a Dlamini Zuma campaigner said. “He was told to declare now, or be dropped as deputy president.”

Mabuza features in second place on Dlamini Zuma’s slate, although there was speculation that he would back a compromise, or unity, candidate like ANC treasurer-general Zweli Mkhize.

Why would the camp then need the third biggest province too? Perhaps the Eastern Cape is needed to help boost Dlamini Zuma’s numbers at the conference, should the first two provinces not deliver in the expected droves.

Perhaps also the Eastern Cape’s campaign is driven by young and ambitious leaders, who could see their fortunes wane for the next few years under Mabuyane and/or Ramaphosa and are now working hard to rise to the top.

Perhaps the province is also a prize for its sentimental value. It’s the birthplace of party greats like Nelson Mandela, Walter Sisulu, and OR Tambo, who would have turned 100 this year.

This year is Tambo’s centenary, which was celebrated last week in Bizana, a village surrounded by mountains in the rural areas of Pondoland here, which inspired the drive to deepen unity.

If the state of the party in the Eastern Cape is, however, a bellwether for this unity in the bigger scheme of things, the December conference might just see a few things fall apart. DM