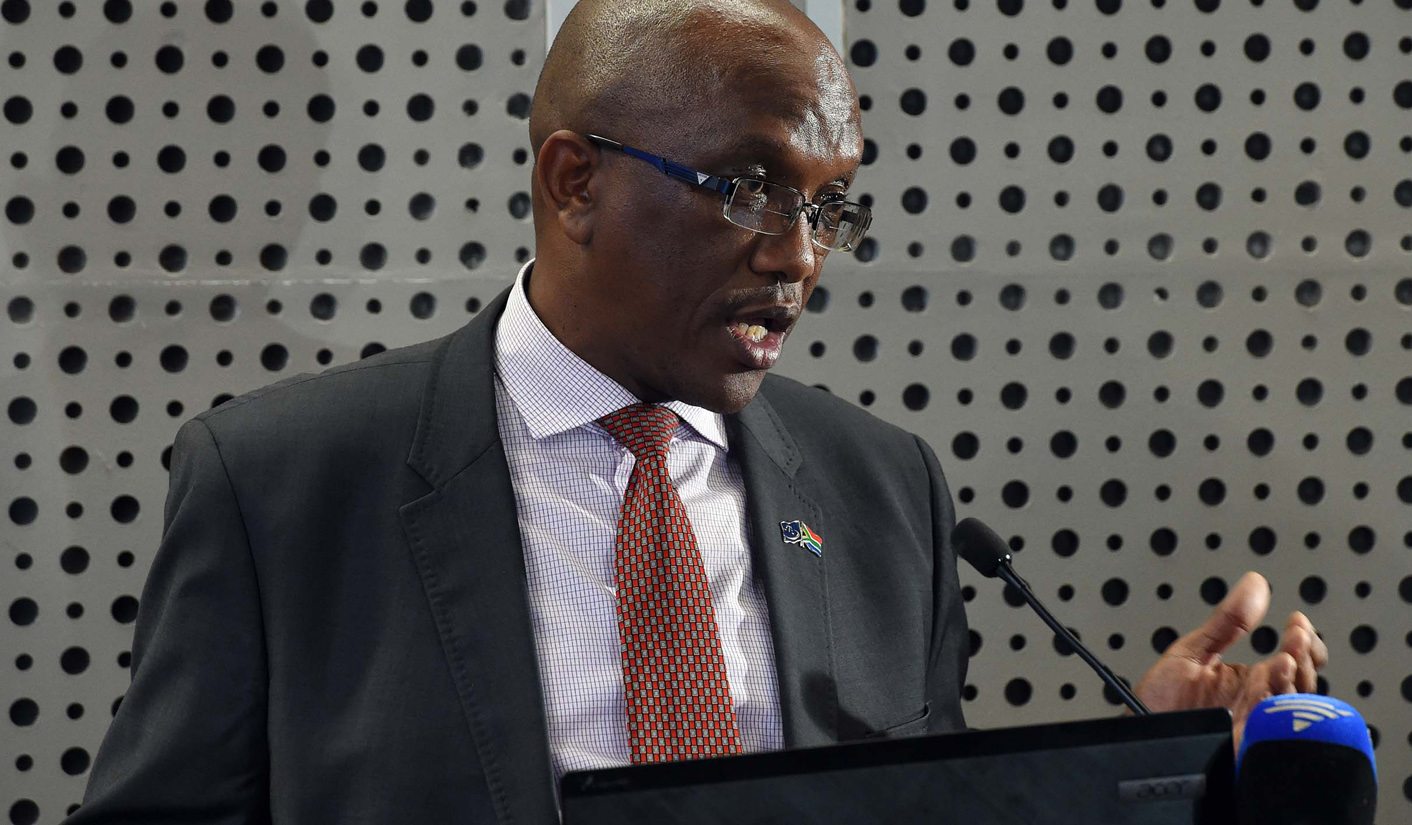 Photo: Auditor General Kimi Makwetu reports an encouraging improvement in the audits results of South Africas municipalities over the past five years during a media briefing at Tshedimosetso House in Pretoria. South Africa. 01/06/2016. Siyabulela Duda (COGTA)

As annual government audits show increases in irregular and wasteful expenditure, an alarming phenomenon has emerged known as “contestation” in which departments or their projects or entities that are at risk of a questionable audit outcome challenge and even clash with the teams from the office of the Auditor General, threatening litigation or even personal intimidation. Scopa Chairperson Themba Godi insists strong action must be taken to halt this. By MOIRA LEVY.

First Published by Notes From The House

The Auditor General of South Africa (AGSA), Kimi Makwetu, reported to Parliament this week that “contestation” is becoming an increasing problem.

By this he meant that every year the AGSA encounters more and more attempts by government departments and their related entities to interfere with the auditing process, even with personal threats and intimidation.

He was at pains to make it clear that he had no problem with auditees asking questions and even challenging outcomes, as auditing is a “complex” process that requires accounting and legal interpretation.

But he told a joint meeting of the Standing Committees on Public Accounts (Scopa), Appropriations and the Auditor-General (AG) that “the trend of contestations we reported last year intensified further in the 2016-17 audit cycle”.

Shocked committee members heard that his teams encountered potential litigation, non co-operation and delays in providing documentary evidence, and even personal threats, if the audit outcomes were not to the liking of the auditees.

Pressure was placed “on audit teams to change conclusions purely to avoid negative outcomes or disclosure of irregular expenditure”.

This was described as unacceptable by the Chairperson of Scopa, Themba Godi. “You can’t use lawyers or threats to achieve your kind of outcomes, and if this institution is compromised then we are doomed as a country. The sheer audacity to demand a good audit outcome is quite galling to say the least, and we have to continue to act very strongly against these practices.”

In his briefing to the committees, Makwetu also confirmed that audit outcomes from government departments and public entities for the 2016-17 financial year had shown a decline in comparison to previous years and irregular spending in the public sector had increased significantly.

The AG audited 396 auditees, which include not only government departments at national, provincial and municipal levels, but also projects and entities that fall within departments, and are funded by departmental grants. Audits track not only expenditure, but also performance reporting, delivery and compliance with the law.

He singled out five key government projects linked to the Departments of Basic Education, Water and Sanitation, Public Works, Agriculture, Forestry and Fisheries and Human Settlements. Together they had a total budget of R58,516-million, of which they managed to spend 98%. Yet between them they met only 22% of their targets.

The Department of Water and Sanitation’s water infrastructure projects showed significant overspend or serious underestimating of budgets. “Contractors were overpaid or paid for services not rendered,” his report stated. The AG said it had proved impossible to establish the full extent of fruitless and wasteful expenditure and he had called on the department to investigate further.

The Nwamitwa Dam in Limpopo, for example, had overspent drastically, increasing its budget from R1.3-billion to R3.7-billion. Of that, an estimated R155.9-million was identified as irregular spending.

One of the worst performing of the five selected government projects was the Accelerated Schools Infrastructure Delivery Initiative (ASIDA), which was set up in 2011 to replace schools that were made of mud or other inappropriate materials and to provide the worst-off schools with water, sanitation and electricity.

The AG’s teams visited ASIDA projects in the Eastern Cape, Limpopo, KwaZulu-Natal and Mpumulanga, and concluded: “Adequate project management processes were not in place to manage and monitor the construction schedule and expenditure on the projects.”

As a result, the AG found total costs on some projects had more than doubled. There were delays in delivery and completion of projects of between three and 22 months in the Eastern Cape and 4-14 months in Mpumulanga and in KZN two projects had made no progress at all since last year’s audit.

Another key government programme, the Department of Public Works’ Expanded Public Works Programme, did not report how many jobs it had created. He said it appeared “the department wanted to avoid audit findings”.

With regard to the departments of health, education and public works, as those with probably the largest budgets the AG reported there were only two clean audits. It is here where you find the largest irregular expenditure, he said.

The major downfall the AG found was non-compliance with Supply Chain Management (SCM) procedures, which he described as “still the albatross” of government spending. He reported that there has been no improvement over the years.

“Supply chain management has deviated since day one. No quotes invited, competitive bidding not invited, preference point system not applied, tax affairs of those suppliers not carefully scrutinised, inadequate performance monitoring, as well as declarations of interest not being submitted. These are the common features you will see,” he said.

The report showed that this was particularly true of State-owned Enterprises (SoEs). The audit showed that close to half (42%) of SOEs did not comply with the simple requirement of requesting at least three written quotations from outside contractors. In some cases there was no open, competitive bidding and the selection was not based on scores or the cheapest quotes. In 16% of SoEs audited the final selection of an external service provider was not the delegated official or committee and his report recorded that the 14 SoEs audited ran up R2,884-million in irregular expenditure.

He made the point that this did not present the full picture because some audits remain outstanding. Significantly, these include Prasa as well as South African Airways and all its entities, which are still under consideration to determine if they are sustainable as a going concern. Their audit reports could significantly shift the final outcome.

He attributed this in part to the absence of Chief Executive Officers at 35% of the SoEs and vacancies and high turnover at the senior management level. He identified five SoEs, including the SABC, whose future sustainability as a going concern raised “significant doubts”.

Makwetu also cited 11-13% of departments with audits that left “material uncertainty” about their ability to continue operating in future, an indicator that has doubled since the last audit. These include three provincial health departments (Eastern Cape, Free State and Northern Cape).

A total of 28 departments have used more than 10% of their 2017/18 budgets (excluding employee costs) to fund 2016/17 cash shortfalls. In the 2016/17 financial year, 92% of unauthorised expenditure was attributed to overspending of the budget.

In terms of overall irregular expenditure, the AG put the total for 2016/17 at nearly R46-billion, but he emphasised that this did not include Prasa, which could increase the total to R60-billion. Makwetu said it was not possible for the AGSA to identify the reason for irregular expenditure. “It is very difficult in a 60-day audit to get to what was behind it.”

“Nothing is conclusive after the audit. Only after the investigation has been done will we know if it was just incompetence or whether someone was trying to do something they are not meant to do.”

Chairperson Godi said after the hearing, “The increase of irregular expenditure throughout government reflects how the mismanagement of finances, fraud and theft of public funds are not taken seriously in government.

“These outcomes demonstrate that the lack of penalties for late submission or no submission poses a huge challenge for oversight bodies seeking redress in the management of finances in the public sector.” DM

Photo: Auditor General Kimi Makwetu reports an encouraging improvement in the audits results of South Africa’s municipalities over the past five years during a media briefing at Tshedimosetso House in Pretoria. South Africa. 01/06/2016. Siyabulela Duda (COGTA)