Op-Ed: Fifty Years On – Che Guevara through the lens 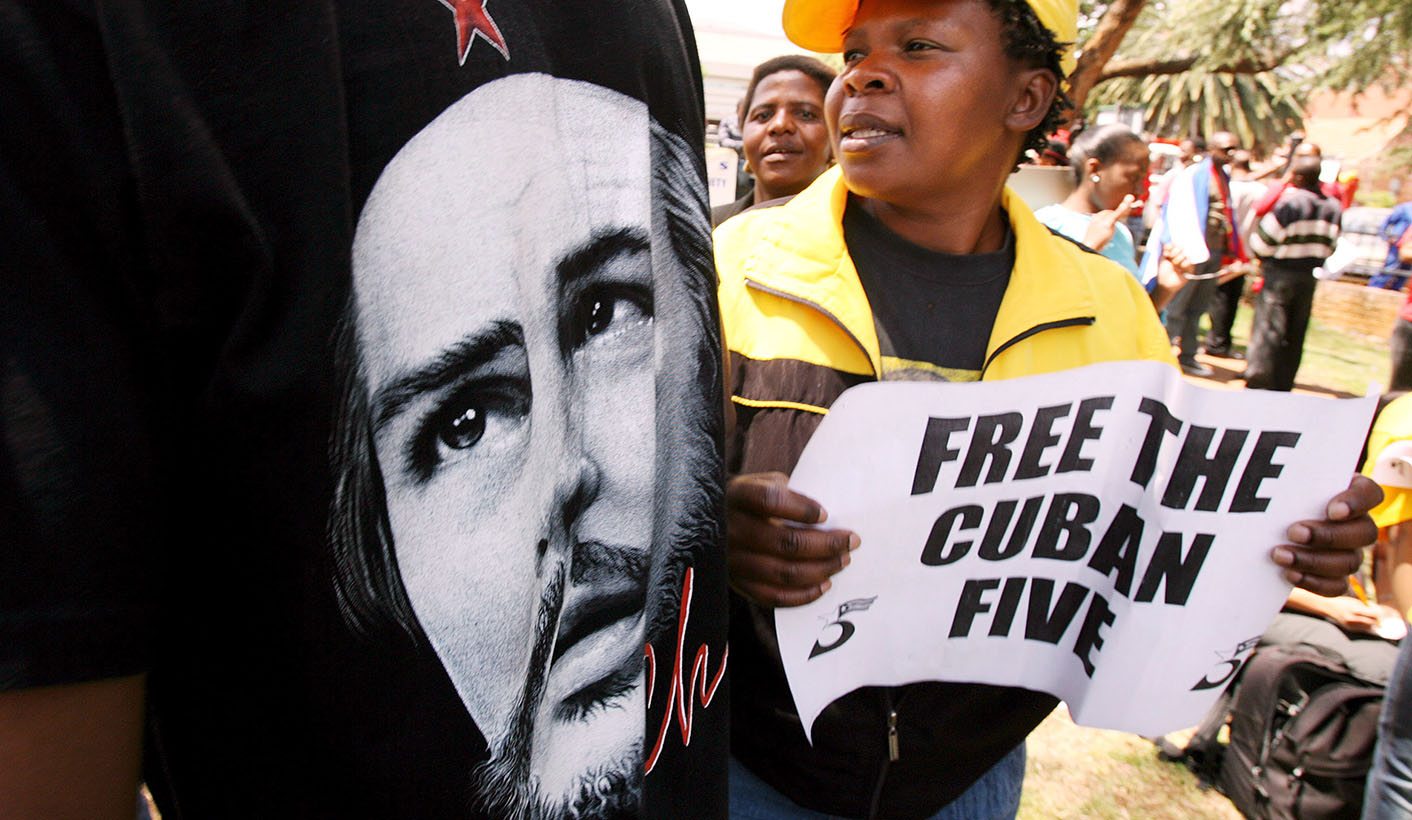 A demonstrator during a protest march in Pretoria on 6 October 2006 looks at a Che Guevara T-shirt depicting a reproduction of the image by Alberto Korda. (Photo: Jon Hrusa / EPA)

Guerrilla leader Che Guevara was killed by the Bolivian army on 9 October, 1967. He remains immortalised through an iconic photograph taken by Alberto Korda, who documented the Cuban revolution through images. By KATE JANSE VAN RENSBURG.

“You can’t write history without images,” said Fidel Castro to Alberto Korda, the Cuban photographer who created the most famous image of Che Guevara.

Fifty years after Guevara’s death, he remains immortalised through the lens of one iconic photograph: Guerrillero Heroica.

Like many celebrated images, Guerrillero Heroica exists as a site of class antagonism in the way it has been reproduced in the world.

On one hand the photograph occurs as a commodity pasted or printed onto T-shirts and woven into the decor of rooms we’ve entered and commercial spaces we’ve seen. In these contexts, it exists empty of Guevara’s revolutionary character and indifferent to the historical context in which it was born. Guevara was a communist and anti-imperialist, a Marxist-Leninist revolutionary.

After Guerrillero Heroica was used in a Smirnoff vodka campaign, Alberto Korda said, “As a supporter of the ideals for which Guevara died, I am not averse to its reproduction by those who wish to propagate his memory and the cause of social justice throughout the world, but I am categorically against the exploitation of Guevara’s image for the promotion of products such as alcohol, or for any purpose that denigrates the reputation of Che.”

Alberto Korda made this image while working for the Cuban newspaper Revolucion. It was on 5 March 1960, a day after the fateful La Coubre explosion where over 100 people died and many were injured. Guerrillero Heroica depicts Guevara at the memorial service of the victims, just over a year after the success of the Cuban Revolution.

Korda sold the photograph in 2000, with the proceeds being donated to the Cuban Health Ministry, to assist with the urgent need for antibiotics for children.

When we remove this image from its political context the processes and relations that produced it slip out of view. Commodifying this image hides the historical conditions in which it was created it and acquired an extraordinary political intensity.

On the streets of South Africa, the Marikana Massacre has often been recalled through the stencil representing Mgcineni “Mambush” Noki. “Mambush”, or the more commonly known “man in the green blanket” appears printed on clothing and pasted on pavements, down alleyways and beneath bridges. The existence of this image, and its popularity and power, means that it lives with the potential to be commodified and isolated from the conditions that created it.

But images such as the stencil of “Mambush” or Guerrillero Heroica also live, autonomously from capital, as symbols of cultural resistance. Guerrillero Heroica is loaded with the potential to transport Guevara’s principles and values into each space it occupies. There are contexts in which these kinds of images remain intensely politicised.

Understanding Guevara through the lens of photography does not only require a close analysis of photographs of Guevara. The use of photography becomes doubly significant when we consider that it was through photography that Guevara himself began to develop political consciousness.

The Motorcycle Diaries, both a book and film, is an entry point into this. Guevara photographed his journey across the length and breadth of South America focusing on documenting the poor conditions of working-class miners in Chile, landless indigenous peoples in Peru and people suffering from leprosy in San Pablo.

Guevara’s life as a photographer was not limited to this moment. He worked for the news organisation Agencia Latina while also working as a photographer in public spaces such as the parks in Mexico City. Later on, Guevara documented the Cuban Revolution itself while also photographing what he witnessed and experienced when travelling with the Cuban government.

In 1990 a collection of more than 200 images made by Guevara was curated into a traveling exhibition by the Centro De Estudios de Che Guevara in Cuba.

Guevara’s photographs are significant because of the content spoken through them about this important moment in history. Additionally, Guevara’s legacy plays a role in determining the value of the images. They are known in the world because they were made by him.

Korda understood the significance of documenting Guevara and the events and struggles that resulted in the Cuban Revolution. After the revolution he went on to document Fidel Castro for many years, becoming both his photographer and friend. Much can be known today about the Cuban Revolution through the lens of Korda’s camera.

Castro once proclaimed to Korda, “Imagine darkness the last 40 years with no photography and no photographers like you? What memories would be left?” As Castro said, “You can’t write history without images.”

Fifty years after Guevara’s death, Guerrillero Heroica’s survival is significant because despite its commodification, it reminds us of the necessity to document through images. It remains alive with the potential for propelling us into action, for the good of humanity and the Earth. DM

Kate Janse van Rensburg is a Masters History student at the University Currently Known as Rhodes (UCKAR). She is associated with the Movement for Socialism in Numsa and the Numsa Research and Policy Unit.

Photo: A demonstrator during a protest march in Pretoria on 6 October 2006 looks at a Che Guevara T-shirt depicting a reproduction of the image by Alberto Korda: Jon Hrusa/(EPA)