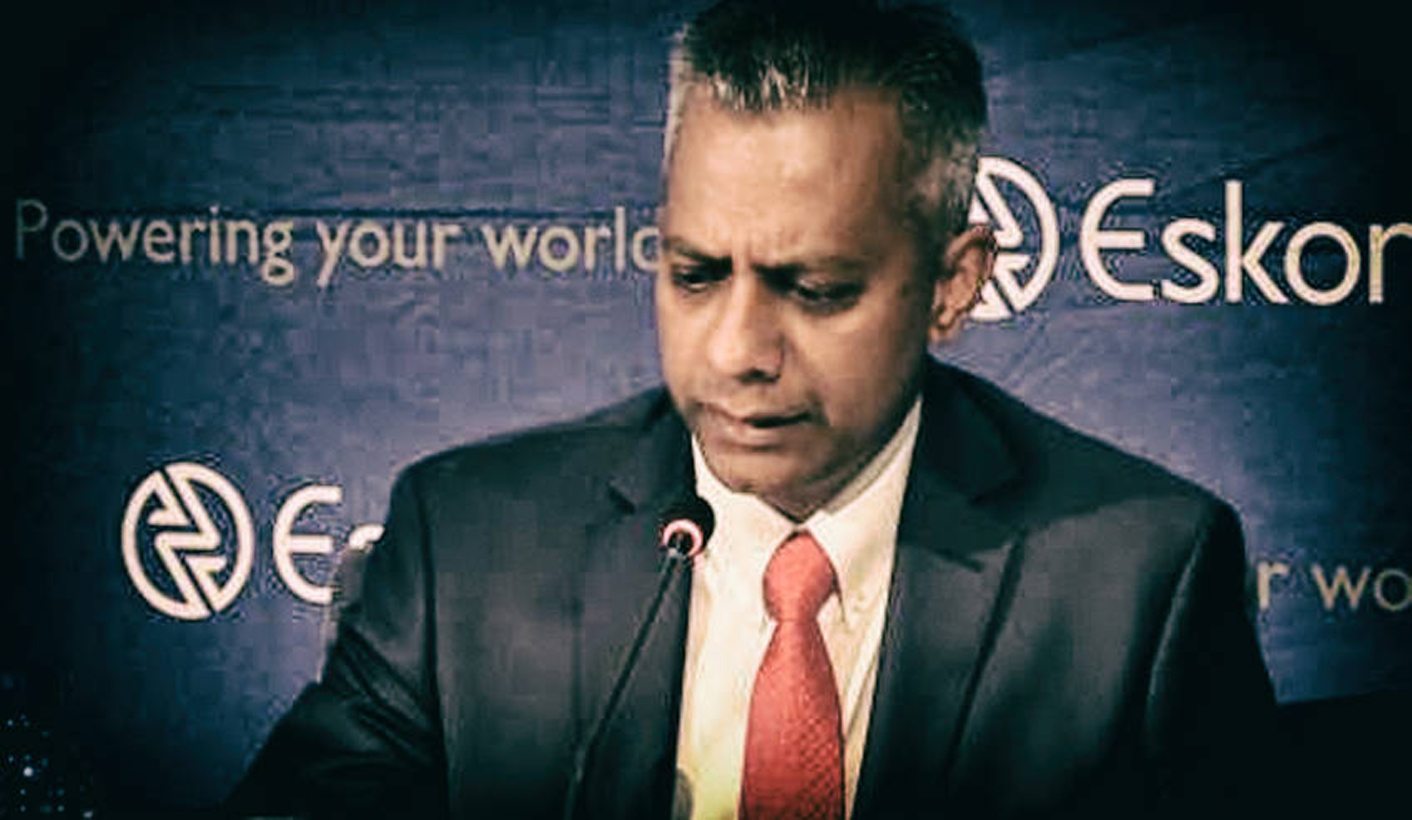 An internal Eskom document drafted in the disciplinary procedure of the power utility’s CFO Anoj Singh lists ten charges of financial misconduct and the breach of Singh’s fiduciary duties towards Eskom. It sensationally claims that giant consulting firm McKinsey’s contract to devise a turnaround strategy for Eskom was illegal, resulting in a R1,6-billion loss for Eskom. The draft charge sheet also accuses Singh of lying to minister of public enterprises Lynne Brown, director-general of public enterprises Richard Seleke, the Eskom board, the Eskom Board Tender Committee and the public about the McKinsey and Trillian debacle. Singh is further accused of failing to disclose that the Guptas paid for his travels to Dubai - trips that included stays and massages at Oberoi hotel. By PAULI VAN WYK for SCORPIO.

Eskom announced the suspension of its beleaguered CFO Anoj Singh on Friday. Singh received a notice of suspension last week, and a curt suspension letter on Friday, 29 September. It does not detail the charges or relate information about what he is accused of. He declined to comment on the matter.

The ten charges in the draft charge sheet relate to Singh’s tenure at Eskom starting in July 2015. The charge sheet builds a case against Singh for being, at best, highly negligent of his fiduciary duties and misrepresenting material facts, especially regarding Eskom’s questionable agreements with McKinsey and Trillian. At worst, the charge sheet provides the basis for possible criminal charges against Singh and accuses him of breaching several provisions of the Public Finance Management Act (PFMA) that, if found substantive, can land him in jail or saddle him with a hefty fine.  Breaching certain PFMA provisions is a reportable crime. There is an obligation on Eskom to report this to the Hawks if the allegations against Singh stands.

The draft charge sheet most notably takes issue with two questionable “contracts” Eskom concluded with international consulting giant McKinsey and the Gupta-linked company Trillian. The first contract related to a corporate plan for Eskom to the tune of R112,24-million. The second contract for a turnaround strategy, now described by the charge sheet as illegal, cost Eskom R1,6-billion for very little work done when it was prematurely terminated.

Along with suspended Eskom CEO Matshela Koko, Singh at the time lobbied the Eskom board tender committee to conclude an “at risk” contract for the corporate plan with McKinsey on “sole source basis”. It means the contract did not go out on tender. This was despite a number of “internal concerns”, the absence of permission from National Treasury and against advice from Eskom’s own legal department.

The draft charges accuses Singh of not explaining the consequences of the contract to the board tender committee, including that the contract potentially allowed runaway costs and “double counting” by McKinsey.

Singh allegedly also didn’t maintain “sufficient internal controls”, resulting in over payment. The charge sheet accuses Singh of not acting in the best interests of Eskom because the contract made little business sense.

Draft charges relating to McKinsey’s turnaround strategy for Eskom are even more damning.

According to the draft, Eskom’s contract with McKinsey, concluded in January 2016, was unlawful and contravened the PFMA. After a series of negative media reports and two letters from McKinsey declaring concerns over Trillian’s ownership, Singh and head of capital Prish Govender, proposed a termination of the contract that included a settlement payment to McKinsey and Trillian. Termination of the contract was proposed to the Eskom board tender committee as an effort to save face and money. But clauses allegedly drafted by McKinsey in the (now disputed) contract may have required Eskom to pay up to R2,84-billion for very little work done. In addition, Singh and Govender motivated payment to Trillian, describing it as the “BBBEE Partner” of McKinsey. This despite McKinsey’s refusal to subcontract to Trillian and the absence of a contract between Eskom and Trillian.

In this regard, Singh is accused of financial misconduct, breaching his fiduciary duties and making a series of misrepresentations to the Eskom board tender committee.

Based on these “misrepresentations”, Singh, Koko and acting chief commercial officer Edwin Mabelane were authorized by the board tender committee to negotiate a settlement with and effect payments to McKinsey and Trillian, the charge sheet notes. In December 2016, a peer review report by Oliver Wyman Marsh found that the proposed settlement with McKinsey required “further interrogation”. Two months later a settlement of R1,398-billion was agreed upon.

The charge sheet accuses Singh of not acting on the “facts at your disposal”, concluding this as a breach of Singh’s fiduciary duties.

“As a direct consequence of this decision by you (together with Mr Koko and Mr Mabelane) Mr P Govender and Mr E Mabelane, who report to you, approved invoices for a total payment to McKinsey and Trillian of R1,593-billion. This exposed Eskom to direct loss, reputational harm and these payments amounts to unauthorized expenditure and also fruitless and wasteful expenditure and your role in this settlement and the consequent payments amounts to financial misconduct,” the charge sheet concludes.

Singh is also charged for his role in Eskom’s questionable prepayment and performance guarantee relating to Tegeta Exploration and Resources. Circumstances around Eskom’s prepayment for coal and the performance guarantee has been widely reported on, with suspicions that Eskom was roped in to help the Guptas out of a tight financial spot. The charge sheet now accuses Singh and Koko of “strongly motivating” to the Eskom board the prepayment of over R600-million for coal to Tegeta. The charge sheet alleges there was no commercial gain or benefit to Eskom, but rather resulted in “significant financial exposure”.

“This submission contained a number of material misrepresentations and material omissions,” the charge sheet concludes.

It further notes that Singh signed a performance guarantee in December 2015, binding Eskom to pay Tegeta up to R1,6-billion for coal without the board’s agreement and in the absence of any “commercial rational for any support to Tegeta in the circumstances”.

Singh is also accused of lying to minister of public enterprises Lynne Brown and director-general Richard Seleke about the nature and exact details of the Mckinsey/Trillian “contracts” as well as the detrimental findings of the Oliver Wyman Marsh report. According to Oliver Wyman Marsh, McKinsey often “double-charged” Eskom for work done. Singh however, represented the reports’ findings as concluding that McKinsey’s services were in line with international standards. This caused Oliver Wyman Marsh to send a letter to Eskom to set the record straight.

Singh is also accused of providing Eskom’s spokesperson Khulu Phasiwe with a misleading and inaccurate statement when journalists asked questions about the McKinsey and Trillian contracts, resulting in misrepresentations to the public.

It further added two more charges relating to Singh’s failure to declare trips to Dubai, paid for by the Guptas. The #GuptaLeaks revealed how Singh travelled to Dubai six or seven times, stayed in the Oberoi hotel and received numerous massages.

“On 19 July 2017 in a public forum and when representing Eskom on you stated in relation to claims that you had improperly received benefits from Gupta connected persons and businesses, including payment for hospitality in Dubai, that you would provide full details and an explanation for this… More than eight weeks have passed and you have failed to provide any such document to Eskom. This has and continues to cause significant harm and damage to Eskom’s reputation,” the draft statement concludes in the tenth charge. DM