Analysis: Team SA finance not worth the taxi fare 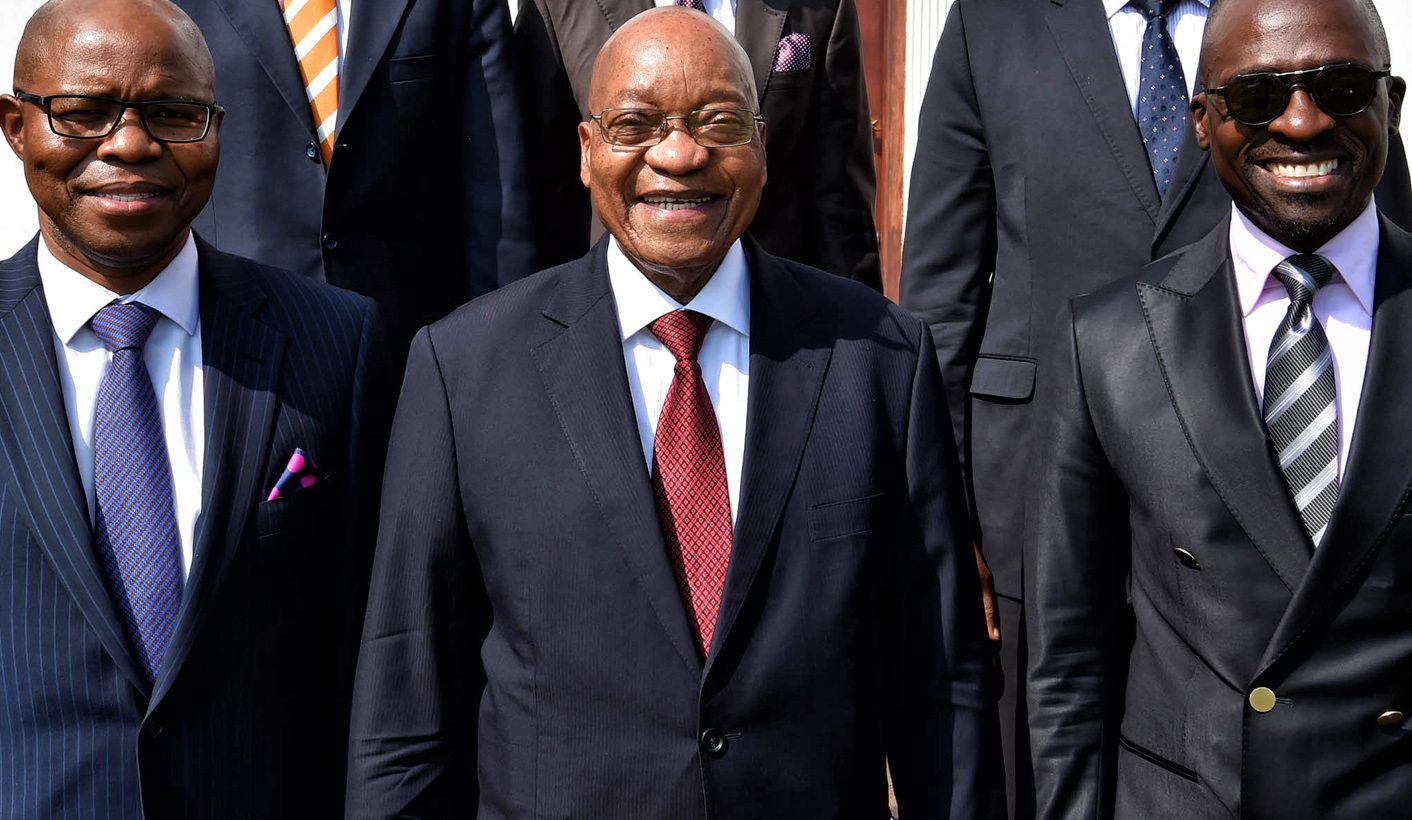 Team Finance on Tuesday put up such a poor showing at its media briefing that, if this reporter were an investor, he’d be loath to loan even taxi fare, never mind the billions of rand Finance Minister Malusi Gigaba urgently needs to bail out state-owned entities including SAA in three days’ time, without impacting negatively on the already painfully stretched national purse. By MARIANNE MERTEN.

Point is, there is a money crunch – amid loss-making SOEs and the South African Revenue Service (SARS) publicly admitted tax collection is short R13.1-billion of target – and it’s a minute to midnight with no plan in sight. There are “ongoing discussions’, “exploring various options” and sleek verbiage of “putting on a united face”, acting against those wanting to drive wedges and nefarious agendas. But no plan. Hence all the speculation that upset Gigaba so – word is that government wants to tap into the R1.8-trillion of government employees’ pensions and savings for, among other things, unemployment, held by the Public Investment Corporation (PIC).

Let’s put it bluntly: 30 September is D-Day for SAA to pay up maturing loans totalling R6.8-billion, or to negotiate a roll-over. The national airline does not have the money. That’s on public record. And Cabinet has known since 22 August, according to memo 17 which Daily Maverick has seen, that at least Citibank would refuse any roll-over of its R1.761-billion loan. So even if all the other lenders were to agree to give the perennial loss-making national airline another break – and that at this stage is not a given – R1.761-billion must be repaid by this Saturday. If not, it will trigger a complex cross-default call-in of all sorts of loans extended against government guarantees, which in the case of Eskom amount to R350-billion, according to the 2017 Budget documentation.

SAA didn’t have the money to meet its loan obligations at the end of June when it failed to renegotiate the R2.2-billion loan repayment due to Standard Chartered even as, just days before that deadline, it told MPs of its confidence a deal would be clinched. At the last minute Gigaba exercised his executive right under the Public Finance Management Act (PFMA) to juggle the national books and pay up on behalf of SAA, using money from the National Revenue Fund and other allocations made in February’s Budget. A similar scenario looms now.

But Tuesday’s Team Finance media briefing showed it was all about politics and talking up the talk. At the heart of it lies the political embarrassment to the governing ANC when information of government’s sole SAA bailout plan – the sale of government’s 39.76% stake in Telkom to raise R10-billion for SAA – was leaked by the quietly spoken DA MP Alf Lees during Deputy President Cyril Ramaphosa’s Q&A in the House.

That Cabinet memorandum 17 of 2017, while it requests several ministers to “explore options of disposing assets necessary to capitalise SAA”, actually outlines only one option: the sale of government’s Telkom shares. It even included a draft special appropriation Bill needed for the parliamentary approval of this asset sale.

Since then there’s been much political energy ventilated in Parliament, and again on Tuesday, on backtracking into “ongoing consultations” and “exploring various options”. But when the political winds blow, as they tend to in an ANC elective conference year, even options are flexible.

Tuesday’s media briefing pooh-poohed the special appropriations Bill, less than two weeks after Deputy Finance Minister Sfiso Buthelezi and National Treasury Director-General Dondo Mogajane told Parliament’s finance committee it was firmly on the table. “We have to plead with Parliament to consider this on an urgent basis. If that’s not possible, we are looking at plan B,” Mogajane told journalists after his meeting with MPs on 13 September after it was pointed out the national legislature was on constituency recess until early October.

It wasn’t the only inconsistency in this whole debacle. While SAA Chief Financial Officer Phumeza Nhantsi in late June told MPs the airline was confident it would be able to reschedule the then due loan repayments, Mogajane on Tuesday said they knew in April that Standard Chartered would not roll over that loan repayment. Effectively, someone misled Parliament.

Neither did Team Finance quite sing off the same hymn sheet with regards to the extension of the term of SAA board chairperson Dudu Myeni, who is also chairperson of the Jacob Zuma Foundation. Buthelezi told MPs of the finance committee Gigaba had used Section 13.5. of the government’s Memorandum of Incorporation (MOI) with SAA, prompting finance committee MPs to write to the finance minister over their concerns about the legality of such a move. Gigaba last week replied that he had actually used Section 13.4.6. of the MOI, and all was in compliance with the Companies Act.

Tuesday’s media briefing was a gallery of victimhood. Gigaba said he took “a dim view” of his name being linked to the PIC speculation (No minister, as the representative of PIC’s sole shareholder, government, the buck stops with you even if your deputy chairs the corporation board), while Buthelezi blamed conspiracy theories to wrongly claim moves to capture the PIC: if the finance minister had the opportunity to replace five board members but instead reappointed them, wasn’t that enough proof against any claims of capture? And PIC CEO Dan Matjila indicated steps are being taken with the management of The Sunday Times over its “mischievous” report designed to “drive wedges between myself and the minister and between myself and the board”.

The timing could not be worse with Gigaba’s maiden Medium-Term Budget Policy Statement (MTBPS), colloquially known as the mini budget, due on 25 October.

But as always the devil is in the detail as Tuesday’s media briefing showed, again. Gigaba didn’t actually say the PIC would not be raided. “There is no attempt to dip into pensions for reasons that are unscrupulous,” is what he did say. And then he gave the PIC its political marching orders: focus on transformation, particularly support to black asset managers and infrastructure.

Those words echoed back to his first media briefing as newly minted finance minister when he emphasised government’s use of its R500-billion procurement budget for black economic empowerment. “For too long, there has been a narrative or perception around Treasury that it belongs primarily and exclusively to ‘orthodox’ economists, big business, powerful interests and international investors,” he said then, although subsequently comments were toned down to indicate that fiscal objectives would remain the same.

Transformation of South Africa’s economic structure is long overdue as the current distortions give a tiny new black elite access to immeasurable wealth that overwhelmingly remains in white hands, leaving the majority of South Africans in deepening poverty and stubbornly high levels of unemployment.

But Gigaba says the PIC must “pay very close attention to transformation. They need to increase the funding which is allocated to black asset managers… (who) remain very much underfunded. And there is a need for us to assist them to grow their assets to underscore.” Is he keeping a close eye on generating political support in the factionalised run-up to the ANC December conference?

And infrastructure? Even if Gigaba styled it as an “important driver” in economic growth, industrialisation and localisation, it’s not exactly an area sparkling with government success stories, never mind #GuptaLeaks emails. There were the Spanish trains that were too high for South Africa’s rail network and the delays and ballooning costs in Eskom’s new coal power station build. And the uMsimvubu Dam, which President Jacob Zuma announced in his 2012 State of the Nation Address, has still to see one drop of water flow.

Gigaba may have told the PIC to “stay away from politics… politics is the responsibility of the shareholder”, but his marching orders were clear. And so the irony of Tuesday’s media conference is that the greatest fears seem to have been confirmed. DM