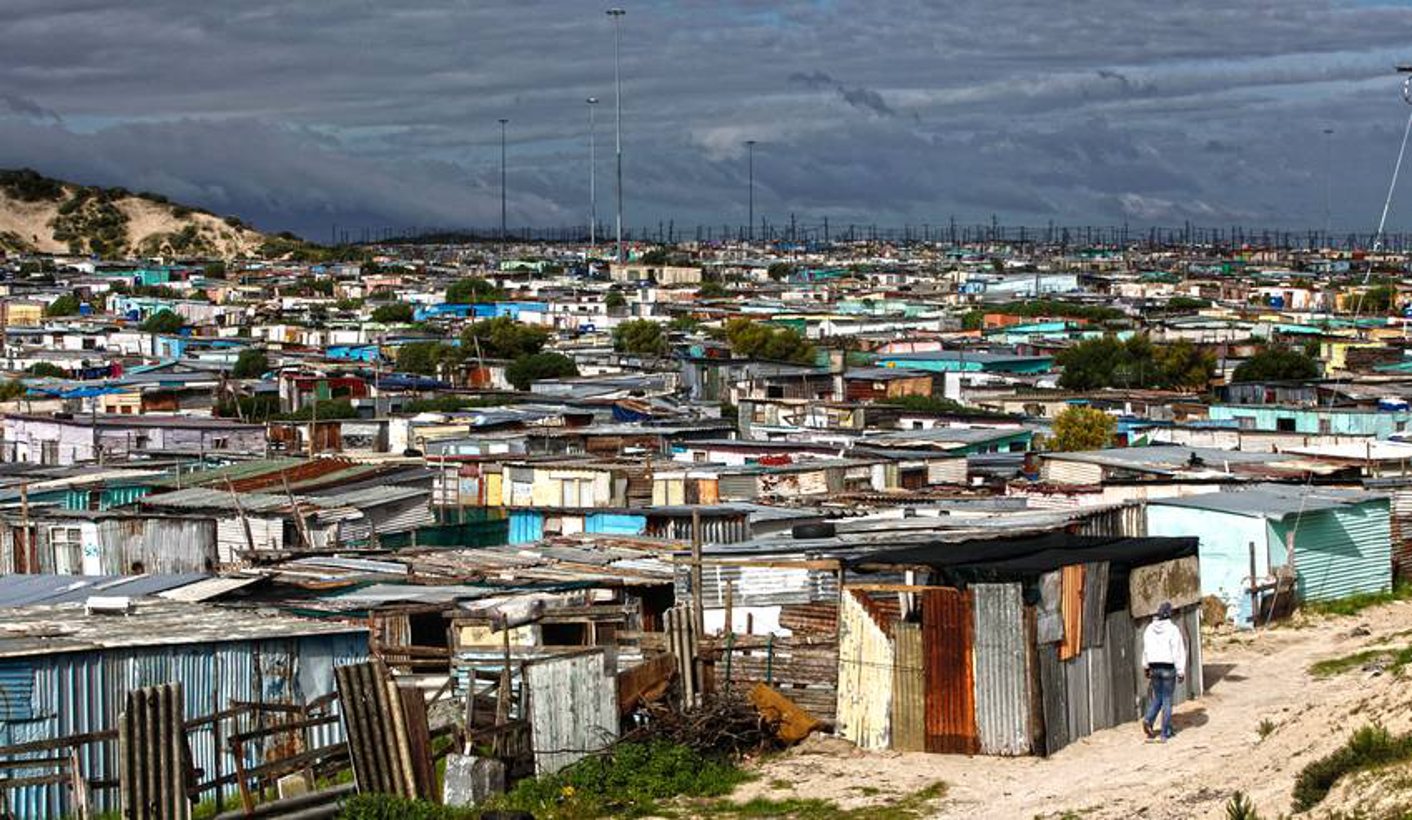 Three years after the Khayelitsha Commission of Inquiry, the office of the Western Cape Premier said it was satisfied with the progress it was making in turning things around. But the activists who set the ball rolling are not so sure. They say the National Ministry of Police is not coming to the party, limiting the capacity of others to keep making improvements. The matter will be heard in the Equality Court in November. By MARELISE VAN DER MERWE.

Nandipha Makeke was raped by young men in her neighbourhood. When they had finished with her, they shot her dead and dumped her in a toilet head first.

“As someone who has experienced this tragedy, it hurts to even hear someone scream outside at night,” says Nomthandazo Makeke, Nandipha’s mother. “Crime is still prevalent. It has not ended. It seems crime will never end.”

Nandipha Makeke was murdered in 2005.

Before her death, Makeke was working as an activist with the Treatment Action Campaign (TAC). She was not the only activist that had faced gender-based violence. Eventually, says TAC co-founder Zackie Achmat, after years of struggle – low conviction rates, drawn-out cases, dockets going missing – the organisation’s anguish boiled over at a failing justice system. TAC, Equal Education and the SJC mobilised men in particular to picket where the justice system failed victims of gender-based violence.

“When we decided on a commission of inquiry, we wanted it to be a comprehensive one that looks at safety and the criminal justice system,” Achmat explains. “This had been preceded by probably hundreds of marches and pickets. We had hit a brick wall. The critical thing was to break open that brick wall and to get to understand the problem – what was wrong with the SAPS and what was wrong in terms of infrastructure development and inequality, and how the two link.”

TAC, EE and SJC were instrumental in the fight in court for the Commission of Inquiry. In a recent statement, the SJC described it as follows: “The Commission itself was a truly ground-breaking moment. For the first time in South Africa many of the inner workings of the police were made public as tens of thousands of pages of SAPS information was made available. It offered the opportunity for residents to tell their stories and senior officers had to account to the public.”

Khayelitsha is growing – not just in numbers, but in terms of its footprint. According to local government, business is booming for B&Bs in Khayelitsha. Airbnb announced at a recent press launch that it would be grabbing a slice of the pie. Earlier in September, GroundUp reported that the area would soon be releasing its own gin.

But headlines running alongside tell a different story: an abalone bust worth R6-million; citizens marchers protesting “Enough is enough” after the murder of Zanele Sandlana; calls to mobilise against continued violence against women; a call for street lights to reduce crime; a Khayelitsha man trying to rob an officer of his firearm.

In August 2017, the office of the Western Cape Premier said “steady progress” was being made in implementing the recommendations made by the Khayelitsha Commission, which was headed by Constitutional Court Judge Kate O’Regan and Advocate Vusi Pikoli. The premier’s office said feedback from the task team and “various stakeholders involved” suggested “a marked difference in the working relationship of participants in the safety space in Khayelitsha – a significant change in the right direction”. Among the developments mentioned was the deployment of additional detectives, which meant case backlogs had decreased from 3,400 to just over 1,600. Case dockets per detective had decreased from 100 to 65. A number of vacant senior positions had also been filled and vigilante incidents were reducing, the premier’s office said.

At the time, SJC senior researcher Dalli Weyers challenged the premier’s report. “In the court papers filed by SAPS in the Police Resources court case, it was revealed that in January this year, the three stations in Khayelitsha combined had 10 less detectives than they had in April 2013. Even if those numbers have since changed, this is not steady progress,” Weyers said.

In August 2014, a final report and a set of 20 recommendations had been handed over to a task team consisting of senior police representatives, civil society representatives and Department of Community Safety (DCS) officials. Some of these were directed at the City of Cape Town, others at the provincial government, at IPID, but most of them were directed at the SAPS.

“There is no SAPS Khayelitsha,” explains SJC’s Chumile Sali. “That is a national body, so the recommendations have a bearing on how SAPS functions nationally.” One of the recommendations, Sali told Daily Maverick¸ was regarding the allocation of resources. Among other things, the Commission recommended that the system SAPS uses to allocate police resources be reviewed.

This sticking point in particular will be raised in the Equality Court in November. It is not the first time it has seen legal action: the SAPS have previously been compelled to release data on how police resources are allocated. Daily Maverick previously reported on the national implications of activists’ fight for more equitable police allocation.

“Our first issue is that the police minister has not acknowledged the report. We understand that in 2012 the police ministry attempted to oppose the Commission and lost. The commission took place and police were called to testify locally, nationally and provincially. When the report was released in 2014, we were expecting a commitment to implementation.

“Because it is not possible for SAPS Khayelitsha to revise a system which is administered nationally, we are still waiting for the police ministry to acknowledge that. SAPS has not come on board in terms of making a commitment to the recommendation. That is our major concern.”

Sali praised the changes that had been made but said that not enough had been done. He said the SJC and Equal Education were optimistic that they had a strong case with potentially national implications for poor communities.

“The fight is no longer about Khayelitsha. It is about all communities. Tembisa, Umlazi, Umtata, Nyanga. If you look at the trend across the country, white affluent communities have better and more police resources,” he said. “So the court’s decision will have an impact in other communities as well. For SAPS to revise its national system, it is going to benefit almost all communities in South Africa.”

The case against the national police ministry was strong, Sali added. “We are optimistic that we are going to win. The case is supported by evidence and valid in terms of what is happening on the ground, especially given that SAPS was compelled to release its data on police personnel per station.

“We are not confident whether the police will implement the ruling of the Equality Court, irrespective of the merit of the court. They may disrespect the court’s decision. (But) we have done our homework.”

The Provincial SAPS declined to comment, and when Daily Maverick contacted SAPS at national level, queries were forwarded within the organisation to a series of employees. In nearly three weeks, none responded.

Provincial Minister for Community Safety Dan Plato said no relief was being sought from the provincial department directly and that the Department of Community Safety had “no operational control over policing activities”. However, he said, as a member of the task team, they would not oppose the application and would abide by any ruling of the court. “This is specifically because the department and Western Cape Government has highlighted over the last five years the insufficiencies in resource deployment throughout the province, most notably historical under-staffing of police in the province and the unequal distribution of SAPS resources where police stations in high crime rate areas too often do not have the necessary resources to adequately serve the community,” he said. The Provincial SAPS had endeavoured to implement recommendations as far as possible, he added.

Plato said that in 2016 the Department conducted research on the allocation of human resources in the Western Cape, and specifically at six police stations as part of a national project of the Civilian Secretariat of Police. “The report analyses the effectiveness of the THRR as a tool to determine the required strength of the police at station level,” he told Daily Maverick. “Taking budgetary constraints into consideration, National Treasury allocates the budget to SAPS and approves the number of posts, which is far less than what is determined via the THRR. The number of granted of funded posts is roughly 68% of the theoretical requirement.” Based on budgetary constraints, Plato said, it was “unlikely” that one would find a station currently staffed at its theoretical capacity.

“Thus far the allocation of resources by the Provincial Commissioner seems to be informed and influenced by crime and crime pattern analysis at any given time. The department’s research report calls for greater clarity around the determination of resource allocation to police stations,” he said. DM