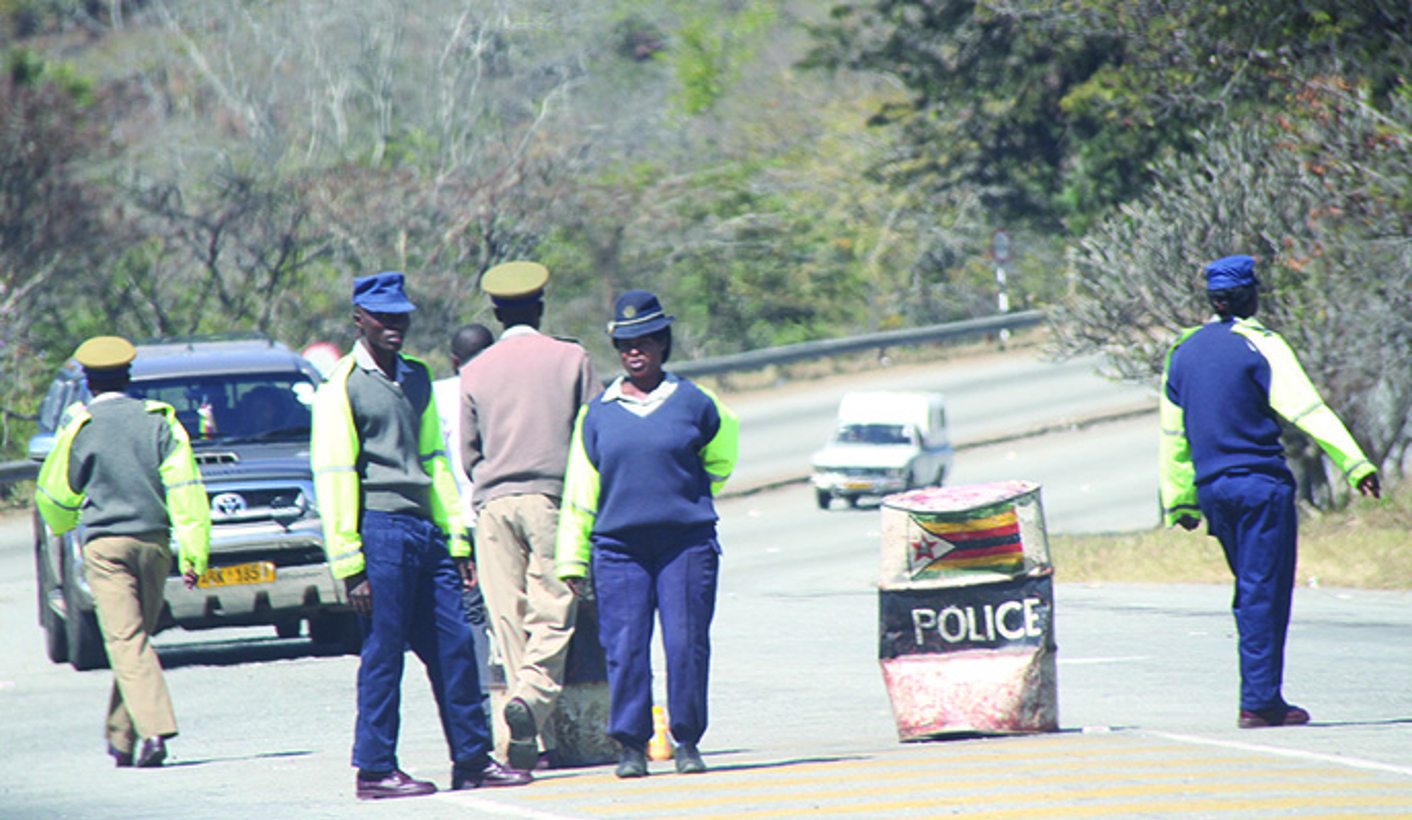 The government encourages corruption to make up for its inability to fund its own institutions. By DEREK MATYSZAK for ISS TODAY.

In Harare, it is sometimes said, nothing is what it appears to be. This is certainly the case with the city’s omnipresent police roadblocks, which give the impression of efficient police maintaining order on the roads.

The roadblocks are in fact little more than an officially authorised shakedown of the public and a means by which Zimbabwe’s broke government seeks to fund a massively under-resourced police force. Numerous violations of the country’s laws occur in the process, and the roadblock dynamics neatly encapsulate, at a micro level, many aspects of Zimbabwe’s broader mis-governance.

The source of the problem is a decision to allow the police to retain the fines they collect. This creates an incentive for the over-regulation of traffic and inducement to find as many motorists as possible guilty of traffic offences, real or imagined.

But supposed enforcement of traffic laws is insufficient to achieve the intended objective –motorists still need to be induced to hand over cash to the police. Accomplishing this requires the police to breach the law at the very moment they claim to be applying it.

The seemingly reasonable request by the police officer to “see” a motorist’s licence is in fact a demand to have custody of it. Disputes as to whether a motorist has violated the law are readily resolved once it’s clear the licence won’t be returned and the motorist won’t be allowed to proceed until guilt is admitted and the “fine” is paid.

Other breaches of the law by the police then follow. Zimbabwe’s criminal law formally pays due regard to the separation of powers. The police thus have no power to find motorists guilty of traffic offences – that is a judicial function. The “traffic ticket” issued by police is in fact a notice to appear in court.

However, as a convenience to all concerned, the law provides a mechanism by which the court appearance may be avoided by admitting the offence and paying a deposit towards the fine which may be imposed by the courts on receipt of the paperwork from the police. It is a constitutional requirement that the fine is paid into the government’s consolidated revenue fund.

In practice, none of this happens. The police no longer carry “traffic tickets” that give motorists the choice of either appearing in court, or admitting guilt and paying the deposit towards the fine. “Not guilty” has been removed as an option by the police, who act as judge, jury and executioner. The usurpation of the judicial function occurs without protest from the courts and the money goes nowhere near central government coffers. The use of fake receipt books also means that often the money isn’t used to fund police operations either, but is taken as bribes supplementing meagre police pay.

Central governmental collusion in this illicit process is readily apparent. Finance Minister Patrick Chinamasa has proposed raising the penalty for minor traffic violations by (US) $10 to $30, and projected amounts accruing from roadblocks ($60-million) have been officially incorporated in the budget of the home affairs ministry. Police stations are given monthly roadblock revenue targets, and individual police officers are ordered to raise set amounts daily from fines.

The short-term advantage of this revenue stream is more than offset by the lack of respect for the police that has developed as a result.

Once the police in Zimbabwe were unquestioningly obeyed by the public. Now heated arguments take place at roadblocks and motorists often resort to driving away rather than parting with their licences. To prevent this, the police arm themselves with home made spiked metal plates that shred the wheels motorists intending to flee.

Although the practice is not sanctioned by law, it has been rigorously defended by Home Affairs Minister Ignatius Chombo and the police’s Commissioner-General Augustine Chihuri. Recently, however, the government announced that the spikes would be used only as a last resort, though the effect of the announcement is yet to be seen.

Antipathy towards the police has led to a strike by commuter taxi drivers and sporadic outbreaks of violence. Riots erupted in Harare when the spikes resulted in injury to the public and commuter passengers, and members of the public have ganged up and attacked traffic officers.

With frequent roadblocks on intercity highways as well as all other towns, there has been a steep drop in tourist numbers visiting the country by car. The lost revenue from tourism may well exceed that gained from the fines. In exit surveys, visitors have cited police roadblocks as a reason for not returning to the country or recommending Zimbabwe as a holiday destination.

Although Tourism Minister Walter Mzembi has joined the chorus of complaints about the situation, the response of Chihuri and Chombo is that the police won’t be deterred from enforcing the law. After all, Chombo cynically asked, if the motorists are innocent, why do they pay admission of guilt fines?

The roadblocks bring to the surface symptoms of a general malaise in governance that extends throughout the Mugabe administration. They make it readily apparent that in Zimbabwe there is rule by law, rather than the rule of law – laws that advantage the state and ruling party are enforced, while those that protect the citizenry are discarded.

Judicial restraint on executive excess is entirely absent, and short-term financial advantage is privileged over long-term development. Corruption is encouraged as a means of alleviating the government’s inability to finance the institutions of state and as a means of distributing largesse.

The resultant policy discord among ministers lies in disputes over outcome rather than method; and the policy persists in the face of public outrage across party divides – Zimbabwean governance in a nutshell. DM