Analysis: Mkhize steps up his charm offensive but the clock’s ticking – 90 days and counting 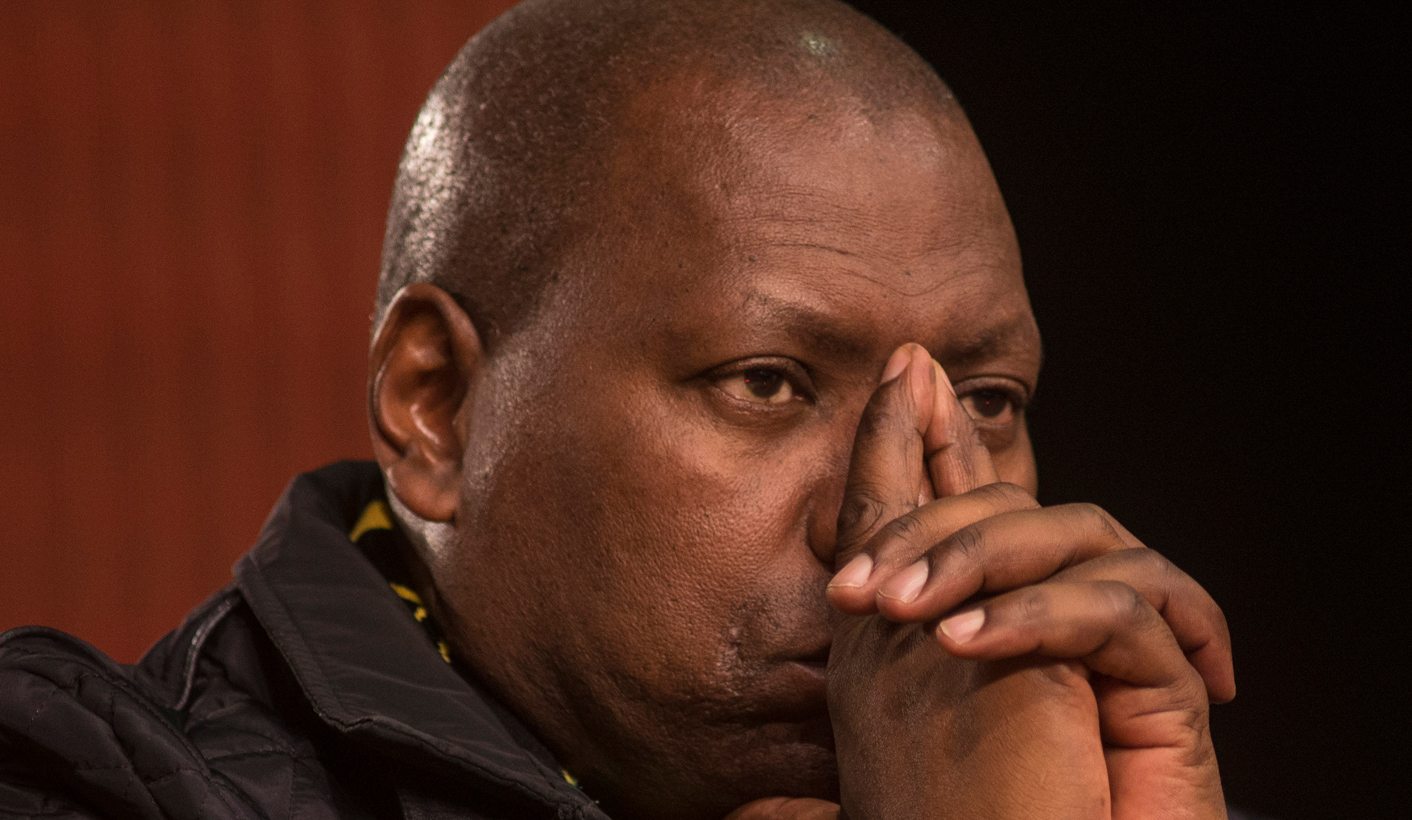 ANC Treasurer-General Zweli Mkhize has previously raised his hand to succeed President Jacob Zuma as ANC president, but so far he’s more widely been punted as Deputy President Cyril Ramaphosa’s number two. Now, however, Khabazela has turned up the charm offensive (and he really, really knows how to), gently stepping up his campaign for the top spot. But what is it that he’s really trying to achieve? By CARIEN DU PLESSIS.

It was a long day at the Enyokeni Palace in Nongoma last Saturday, when a seemingly never-ending stream of young women, bare-breasted and scantily clad, filed past King Goodwill Zwelinthini as part of the annual reed dance. As a cultural phenomenon, it’s undeniable. The dance has been growing in recent years due to considerable efforts by the king to revive it and, with billions of rand of government funds invested, it’s been used as a platform to drive social campaigns.

In a rapidly modernising world where especially female nudity has been sexualised and commodified, and where gender rights activists have been pushing back against the exploitation of the female form, and against patriarchy, the practice has been questioned.

Mkhize is very much aware of these contradictions, yet he and IFP leader Mangosuthu Buthelezi, who is part of the Zulu royal family, stood by the king’s side in the royal kraal all day on Saturday as 45,000 reed-bearing women of all shapes and sizes filed past, enthusiastically doing their song and dances.

Some were clearly sore from being on their feet all day, while one or two passed out from sheer exhaustion and perhaps also the heat.

Outside the palace grounds an entire weekend community were festively camped out in minibuses, cars and tents, with women cooking and selling food. A handsome gang of male bikers pulled in, revving their machines to the point of hormonal mayhem, and a bunch of young men in fancy and not-so-fancy cars prowled outside in the road after dark.

Mkhize’s appearance – he swapped his sharp suits and patterned shirts for a sleeveless white vest and traditional leopard skins – must have had some political calculation behind it, and would have made an impression on those who held this tradition dear.

Even those locals in the area who question the reed dance have expressed some reverence for its mystique. It is, for instance, said that muti placed on the royal palace grounds prevented men from getting aroused amid all the maidens. Even unbelievers vowed this is true.

As a woman, Dlamini-Zuma would, at best, have been relegated to speaking at the formal ceremony afterwards, like MEC for social development Weziwe Thusi, who stood in for the sickly Premier Willies Mchunu.

And Ramaphosa isn’t Zulu, which restricts his access a bit.

Mkhize, though, fitted right in, and was acknowledged in the speeches by the king for his support of the event stretching back to his years as provincial premier, from 2009 to 2012.

Mkhize is aware of the controversy around the event. President Jacob Zuma has, for instance, attended in the past, but in 2015 had to be protected by his bodyguards as mass hysteria broke out when the girls claimed they were molested by demons.

Mkhize told this journalist, however, that he supported the event not for political reasons, but “on the basis of cultural diversity”. He asked that it be treated in the media with sensitivity.

The reed dance, the qualified medical doctor said, offered “a unique platform wherein the issue of sexuality, the promotion of abstinence and the fight against HIV and sexually transmitted diseases” could be discussed in a traditional context, making discussions on sex less of a taboo.

Mkhize said the communities involved had to be made aware of the rights of the girls, their protection and privacy and their choices. Parents were also roped in.

He’s right to be careful. Mkhize can’t afford any of the sleazy controversy that’s recently emerged around Ramaphosa, for one. Apart from their grassroots work, they appeal to the same business, white and Western diplomatic constituencies, and these would not have liked reports about Ramaphosa’s affair.

As for the actual ANC members who would be doing the voting, Mkhize, like all of the other presidential candidates, has been pushing the message of radical economic transformation – the party line.

He has also, according to his campaigners, been working branches since 2014. In KwaZulu-Natal he’d also have a solid base from his time as premier and the 15 years before that as MEC.

He is the one who helped Zuma rise to power at the ANC’s conference in 2007, and, before that, who powered the night vigils in front of the Pietermaritzburg high court during Zuma’s rape trial.

Mkhize, incidentally, became disenchanted when Zuma removed Nhlanhla Nene from the finance portfolio in December 2015, and finally stopped believing when, in March this year, Zuma unilaterally removed Pravin Gordhan too (Mkhize, incidentally, was one of those who brought Gordhan in after the Nene debacle).

One local leader privately admitted that, even though he was a fierce supporter of Zuma in the past and in public supported Dlamini-Zuma, in whose region he lives, he thought Mkhize was the one likely to emerge.

Ramaphosa was tainted for the reason mentioned above.

If Dlamini-Zuma became president, “we can kiss 2019 goodbye”, he said, referring to the general elections coming up in that year. The same would be true for Ramaphosa, due to the fierce contestation between the sides. “The ANC would fight too much,” he said.

He has a point. The province has already seen the ANC lose a by-election to the IFP, in Nqutu in May, due to infighting.

He said Mkhize could unite the ANC. He’s already had his first endorsement from the Alfred Nzo region in the Eastern Cape, which is of average size and importance.

“He is a serious contender in my view, and we will get him if we can manage to persuade each other. We must get Cyril behind Zweli,” he said, likening it to the alliance between Zuma and businessman Tokyo Sexwale in 2007, against former president Thabo Mbeki. Both initially campaigned on separate tickets, until Sexwale threw his weight behind Zuma.

Another local leader, however, said he supported Ramaphosa and branches were “singing” Mkhize’s name as deputy president.

The problem for Mkhize, however, is that Ramaphosa’s campaigners have recently changed their preference to a woman, such as Human Settlements Minister Lindiwe Sisulu, as a deputy to contend with the female president narrative of the Dlamini-Zuma lobby group.

Mkhize has since stepped forward more prominently, portraying himself as a unity candidate. (Although his track record is slightly damaged by the fact that the provincial conference of November 2015, when he tried to broker a deal between the contending sides, was nullified by a court this week.)

Mkhize could also find himself stubbing his toes against principles. Many KwaZulu-Natal members, for instance, have said that they supported Zuma because of tradition in 2007 – i.e. in the ANC the deputy president should become the president – and would support Ramaphosa on the same grounds.

Mkhize himself, when asked how he would deal with this sentiment, doesn’t seem to have a clear answer, only saying it was for the branches to decide.

There is also a perception expressed by some in the province who saw themselves caught up in the political violence in Richmond in the KwaZulu-Natal midlands that Mkhize was too close to the turmoil at the time. Whether that was true or not, many still don’t trust him.

Either way, it’s unlikely that the province will go into the December conference united, which means Mkhize would have to reach out to other provinces to make up numbers.

In Mpumalanga, Premier DD Mabuza has been playing his cards close to his chest, although he’s been talking unity. Some say there’s a possibility that he could come on board and boost Mkhize’s campaign as his province is one of the most united in the country, and the only one that is actually growing – a kingmaker, in other words.

Gauteng ANC chairperson Paul Mashatile has also been mentioned as a possible choice for Mkhize to team up with.

One of Mkhize’s big tasks now would be to find female running mates to make up the numbers and lend credibility to his campaign. He’d have to hurry though. There are only about 90 days left to go. DM