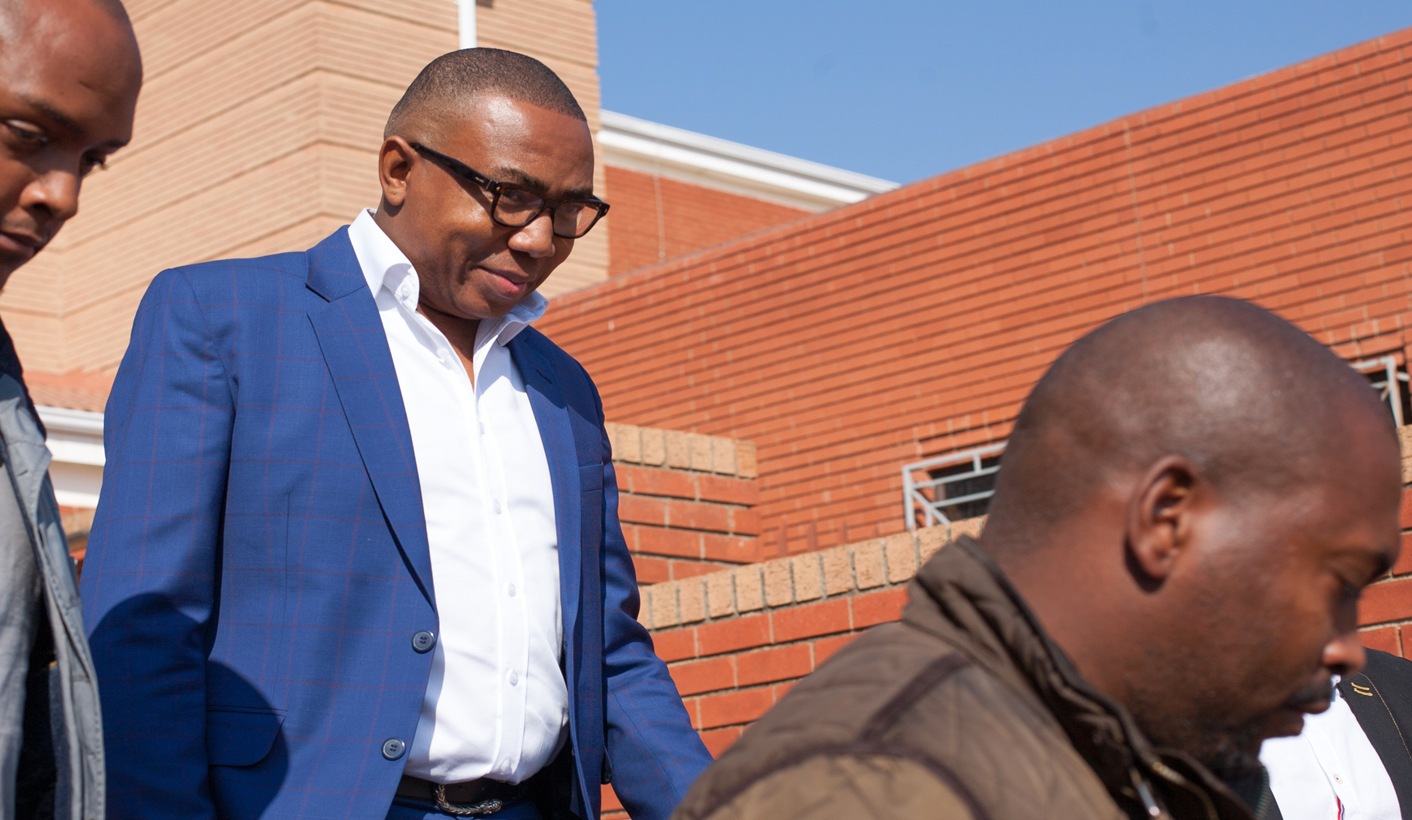 Former deputy higher education and training minister Mduduzi Manana on Wednesday pleaded and was found guilty of three counts of assault with intent to cause grievous bodily harm on charges relating to attacking three women at a nightclub in August. Manana said: “If you’ve provoked, walk away. Don’t act in this way. Now I had to man up. That’s what a leader does.” Sentencing has been postponed and it’s anyone’s guess what punishment he might receive. By GREG NICOLSON.

In a statement read to the Randburg Magistrate’s Court, Mduduzi Manana admitted he knew he was wrong when he assaulted three women at Cubana nightclub in Fourways, Johannesburg, in August. He said a rowdy argument ensued when the women sat by his table and tried to video him. When his friends stopped the women, they yelled, “Who do you think you are, [faggot]?”

“I plead guilty,” Manana told the court on all three counts of assault with intent to cause grievous bodily harm. He said he knew he was wrong when he pulled the women by their hair, threw them to the ground, slapped, punched, and kicked them. “I admit that I have no lawful defence,” he said in his statement. He was found guilty of all three counts.

Manana, who was wearing a crisp three-piece navy suit (he also wore two watches) on Wednesday, will remain out on R5,000 bail until his sentencing proceedings are heard on 7 November. The prosecutor requested the lengthy postponement to take victim impact statements to use during the sentencing proceedings.

Outside court in the morning, activists gathered either for or against Manana.

The Democratic Alliance demonstrated in support of the victims. “He’s a leader. He’s an MP. He cannot be caught beating up women in the public,” said DA member Vuyo Mthakhathi. “What kind of message does that send to the public? That if you’re in power you can do whatever you want.”

The DA members called for a severe reprimand. “Action must be taken to show other men,” said Nelly Madungane. “Most of the men are killing women, even children. Where are [women] going to walk?” Party member John Letsoalo said government must intensify programmes to fight violence against women.

Students gathered to support Manana. They were T-shirts with his face reading, “#WeAreOneNation”, “#WeAreSorry” and “#WeAreAgainstWomenAbuse”. A group calling itself the Women’s Network wore T-shirts reading, “He Erred, Forgive Him.” They said the former deputy minister of higher education and training had positively impacted on universities.

While demonstrators arrived at court in the morning, the case was beset with delays and was only heard later in the afternoon, after brief disputes between those supporting and those against Manana.

The three victims were in court with their families but declined to comment. Mandisa Duma, Noluthando Mahlanga and Thina Mopipa all opened cases against Manana. The #NotInMyName group, supporting the victims, called for justice to takes its course and hold Manana accountable.

“They’re lying!” yelled some of the students at the victims as they left the court. “It’s a trap!” Other students chastised them.

After the case, Manana said, “Truly, I want justice to be served. It mustn’t – obviously – it doesn’t have to favour me.” Asked whether he hoped the court would be lenient in sentencing, he said, “The court will use its own discretion.” He said his bail conditions prevented him from apologising directly to the victims.

“I’m happy that you have come from far and afield to not only give support to me, but the victims as well,” he told students outside the court. “I had already apologised to the nation and I want to apologise to you, the students. I had worked with you for five years in education in the area of skills development and I’m happy that you could come today, not to defend me but to say indeed as students you feel that I must address whatever issue that led me to act in the manner that I did.

“We must not assault and abuse women going forward,” said Manana. “If you’ve provoked, walk away. Don’t act in this way. Now I had to man up. That’s what a leader does.” Manana said he would lead a campaign and reach out to civil society organisations to fight gender-based violence.

After the hearing, Tshwane University of Technology student Freddy Khoza said Manana was a role model by having plead guilty. “He is saying to men: in fact, who are abusive, it was a mistake,” said Khoza. “We want such leaders.”

Bongekile Filawa, from the University of Fort Hare, said Manana shouldn’t be judged on one mistake. “He has done a lot to liberate a black child, to restore the dignity of a black child.”

In a statement, Manana apologised after the assault to the first victim who laid a charge, Mandisa Duma, as well as “her family, the government of South Africa, and all South Africans”. “Regardless of the extreme provocation‚ I should have exercised restraint,” he said. He was widely criticised for the comment on provocation.

He said: “That shameful incident should not have happened. I know that my actions and those of the people in my company have disappointed and hurt many people in the country. As a leader‚ I should have known better and acted better. I will subject myself fully to the process of the law and give it my full co-operation.” He also issued a statement apologising to Cubana. He later resigned from his post as deputy minister.

Lawyers said the magistrate has wide discretion in deciding Manana’s sentence. There’s no minimum sentence for assault with intent to cause grievous bodily harm. “It’s a hell of a thumb suck and it’s going to depend on a lot of factors,” said Advocate James Grant. “If he’s pleaded guilty to those [three] charges, a single charge could attract a prison term.”

Grant guessed Manana could be sentenced to four to eight years in prison for his charges, but said courts these days are applying innovative sentences. He could receive some prison time with the rest to be served at home under correction supervision. That Manana pleaded guilty, saving the court time and resources, and displayed remorse, will count in his favour when it comes to sentencing.

Asked what Manana’s sentence might be, attorney Tyone Maseko responded, “How long is a piece of string?” He said sentencing is discretionary and would come down to how well the defence and prosecutor argue their cases. Maseko said Manana’s personal circumstances could count in his favour. He’s a high-profile individual who hasn’t been charged before. The magistrate will have to ask what is in the interests of society. Society might want to punish Manana, but jailing him might not have a positive contribution and he could still serve some use.

“He could still get a suspended sentence, this guy,” said Maseko. Such sentences result in very varying outcomes.

Manana wasn’t the only suspect in question on Wednesday. He committed the assault with the help of others. One of the victims on Wednesday spotted one of Manana’s fellow assaulters supporting him in court and wrote a statement to that effect to press charges. He was reportedly arrested at the court. DM