GroundUp: R66-million paid out to former miners with silicosis 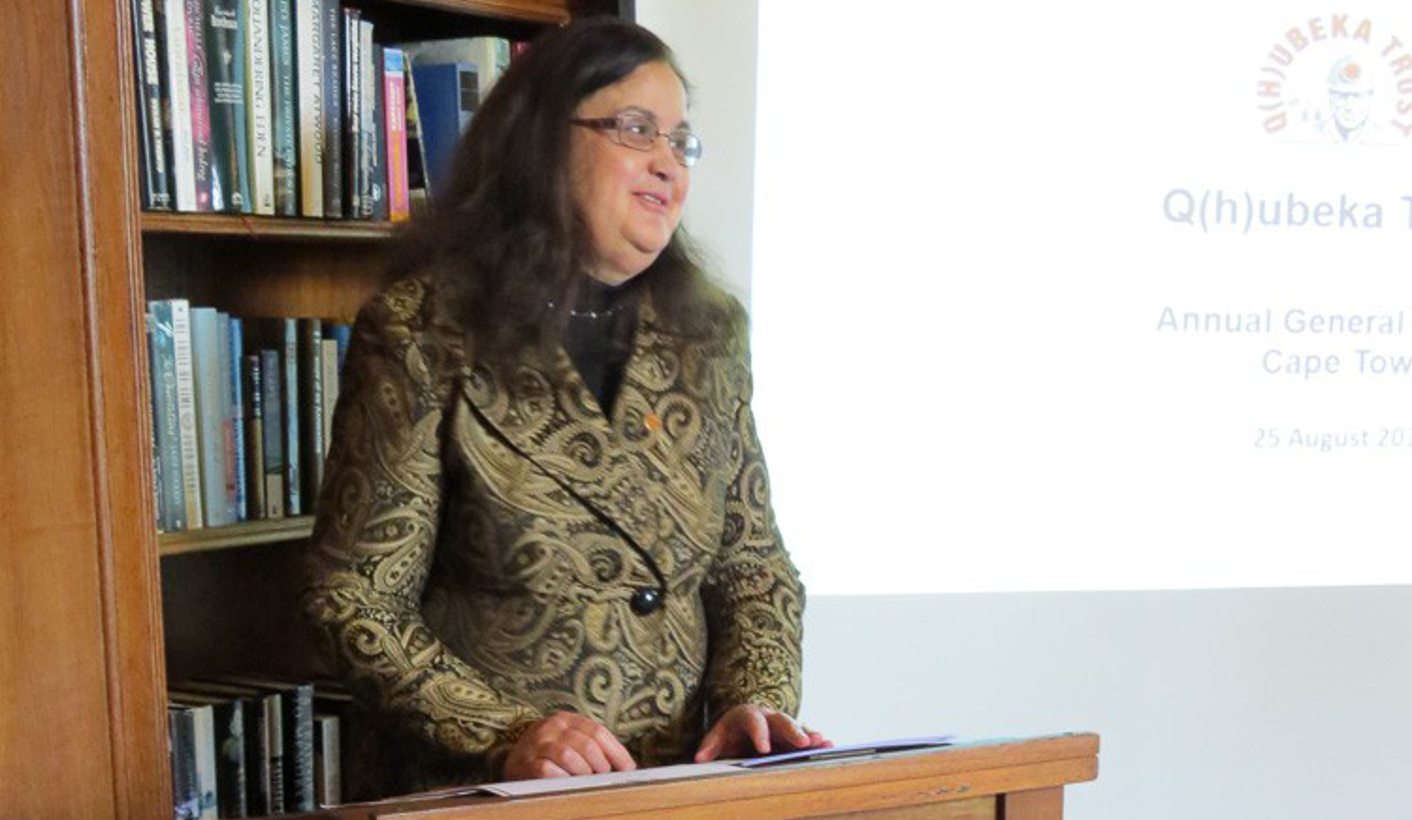 Q(h)ubeka Trust reports back after the first 16 months. By Pete Lewis for GROUNDUP.

More than R66-million has been paid out to former mineworkers suffering from silicosis and related diseases through the Q(h)ubeka Trust set up last year.

(Note: This is a separate, albeit related, matter to the silicosis class action court case.)

At a meeting in Cape Town of the trust’s board earlier this month, the chair and Executive Director of the National Institute for Occupational Health, Sophia Kisting, reported significant progress in compensating former mineworkers and their and their dependants.

The trust was set up after Zanele Mbuyisa of Mbuyisa Neale Attorneys, working with Richard Meeran of the human rights law firm Leigh Day and Co, based in London, announced an out-of-court settlement of litigation by 4,365 former mine workers with occupational lung disease. The miners had been let down by the statutory system of compensation, under the control of the Department of Health.

Claimants had varying degrees of disability caused by scarring of the lung by tiny silica particles inhaled as they worked in gold mines owned by Anglo-American and AngloGold Ashanti operations. Such scarring of the lung is progressive and incurable, and greatly raised their risk of contracting TB. Many had had repeated bouts of TB as well as permanent breathlessness and lack of energy as their silicosis progressed, making it impossible for them to continue working, even on their own land, and making them dependent on their families for survival and nursing. A staggering 500 of them died during the litigation, forfeiting any access to justice and reparation.

This settlement followed a previous confidential settlement in 2013 which ended nine years of litigation against Anglo American on behalf of 23 former workers from President Steyn gold mine.

During a 12-year period the lawyers worked to identify and inform claimants in far flung rural areas and waded through mountains of documents to build the case that the mining houses knew that they were causing an epidemic of occupational disease, yet did nothing effective to stem it. Lawyers for the mines were instructed to drag out the litigation on technical grounds for many years, delaying court hearings on the merits of the case for as long as possible, until further delay looked doubtful, and surviving claimants were prepared to settle lest they should die before receiving compensation.

The 2016 settlement put aside R395-million for the beneficiaries, R10-million for the trust administration costs, and a further R10-million available on request to the mines. The trust was named Q(h)ubeka Trust, after one of the lead claimants, Binyana Benson Qubeka, whose name, with an added “h” in IsiXhosa, means “go forward”. He had worked for 15 years at Anglogold mines and a further 10 years at Anglo American operations, and had been diagnosed with silicosis in 1998.

The settlement funds the administrative costs of the activities of the trust, the certification and qualification of those beneficiaries for statutory compensation as well as  the private compensation provided, and the cost of their qualifying medical evaluations. Lawyers for the claimants essentially waived costs.

Kisting presented the governing rules and significant achievements of the trust in its first 16 months. Claimants must have worked at a listed number of mine shafts owned by the two mining houses for at least two years before 2009, when the two companies sold the shafts. For the first three years, the Trust is to medically assess living claimants in terms of various levels of silicosis, with or without TB.

The trust began its work on 22 April 2016, and, unless more time is requested and granted by the High Court, it will operate till April 2019 to identify and diagnose the 4,365 named claimants and pay them the first of two tranches of compensation. The cases of those who have never received the statutory compensation to which they were entitled under the Occupational Diseases in Mines and Works Act (the large majority) will be submitted to to the Mines Compensation Commissioner Barry Kistnasamy of the Department of Health.

A further three years will then be used to to search for missing claimants on the list, and to conduct an actuarial evaluation of the trust fund, on the basis of which the second and final payment will be made to claimants, according to their diagnosis. Each claimant, or dependent in the case of death, will be paid out a unique sum.

In the first 16 months, independent panels of occupational health specialists and radiologists were put together in a Consultative Occupational Medical Panel based in Cape Town, Durban, and Johannesburg to diagnose claimants, supervised by specialist Jim Te Water Naude. Offices were established to interact directly with claimants and educate them about the terms of the settlement. A claims management system was developed to track and manage progress for each claimant. Tracing agencies were commissioned to find about 800 missing claimants or provide proof of death, and identify their dependants.

The incidence of (mostly inactive) TB among the claimants examined was reported as staggeringly high, and this causes difficulties in reading chest X-rays for silicosis. With help from the International Labour Organisation, the medical panel had to develop an entirely new X-ray standard to cope with the double epidemic of TB and silicosis resulting from working in South African gold mines. In a few cases, where scarring of the lung by TB and silicosis rendered silicosis diagnosis impossible on X-ray, CT scanning was used.

If all else fails, when claimants die, they are entitled to an autopsy under the Act, and the trust has been working with them and their families on getting consent for the practice, since it is the most reliable method of diagnosis of all, in order to secure payment to dependants. The team has been developing “verbal autopsy” – by means of interviews with close family members.

Kisting pointed out that claimants are still dying of TB, and many have no medical records of any kind. Te Water Naude added that more than 50% of the claimants are likely to have suffered both silicosis and TB, which is an indictment of the “development” of the sub-continent by the mines since gold was discovered in modern day Gauteng in 1886.

Trustee Jeff Doidge, told the Board that the trust had been working to build expert capacity in the regions where it operates, using radiologists in isolated rural districts, and supplying them with modern equipment and training to use it.

Nodu Nolokwe, the Medical Office co-ordinator, spoke about the heartbreak of claimants who, though ill, did not meet the diagnostic requirements for compensation. Some, for instance, had TB when working at the mine, or had active TB when traced, but without silicosis, or suffered from emphysema-type conditions or lung cancer. “They simply cannot understand it, so it is very difficult,” she said.

One stumbling block for the trust has been the requirement for biometric identification of claimants for receipt of payments. Banks have been unable to help with this in rural areas, and it has been a “nightmare”, according to Kisting. The trust has also battled to establish the length of service at the mine shafts, of the mines. “Undocumented migration” is an enduring feature of South Africa’s history.

But in spite of these difficulties, in the 11 months to end-February 2017, 1,292 claimants had been referred to local doctors for medical examination, and 57% of these had been assigned diagnosis by the panel. More than a third of these were not compensable under the scheme, and 103 had been paid out. Then the system speeded up considerably in the next six months, with 627 claimants paid out nearly R67-million, an average of nearly R106,600 each.

This shows what can be achieved when a century-old failed compensation system based on racist precepts is challenged by the indefatigable pursuit of social justice and dignity, and when a programme of social welfare is rolled out without corruption and profiteering and in the true spirit of Batho Pele (“people first”). The lessons learned will guide the settlement of the much larger class action litigation involving all the gold mining houses. DM

Goolam Aboobaker is an economist and trustee of the Kagiso Trust

John Doidge is an attorney and a trustee of the Asbestos Relief Trust, set up after similar litigation on behalf of former asbestos mineworkers in the Northern Cape

Photo: Q(h)ubeka Trust has paid out more than R66 million to former mineworkers, Sophia Kisting, the chair of the trust, told the board meeting. Photo: Pete Lewis

CORRECTION: It has been pointed out that the lawyers for the claimants did not waive their legal costs. Instead, these costs were met through a separate agreement with the mining companies, and not from funds set aside for the beneficiaries.  Furthermore, the Trust Deed does provide for compensation for the dependents of the 500 mineworkers who died during the litigation.  The correct first name of one of the trustees is John (Doidge) not Jeff. GroundUp regrets these errors.