GroundUp: A history of violence – police action in Hout Bay 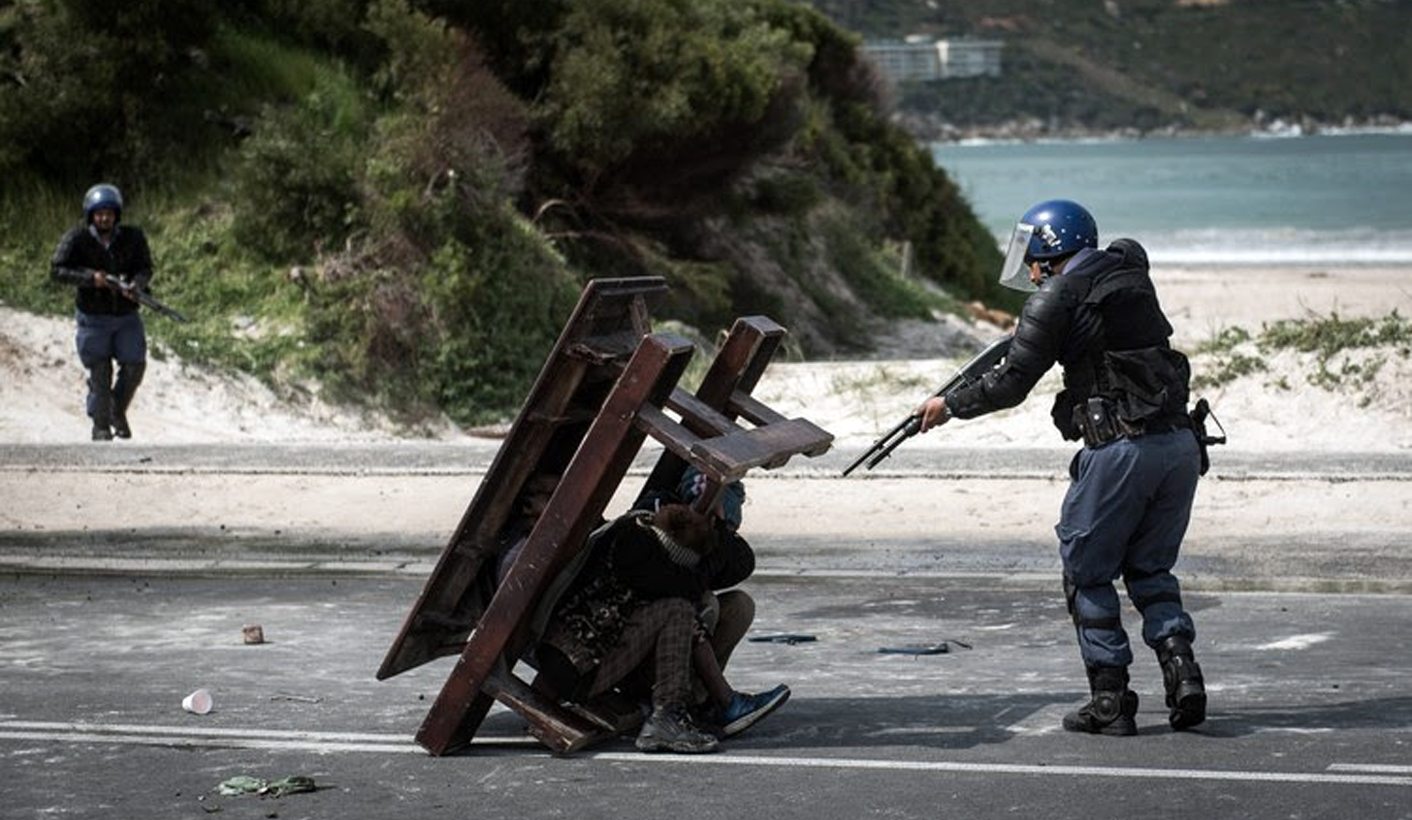 A young Hout Bay teenager who was shot by police with rubber bullets during a protest in Hangberg over dwindling fishing quotas has undergone surgery. His name is Ona Dubula. By Ashleigh Furlong, Kimon de Greef, Mary-Anne Gontsana and Ashraf Hendricks for GROUNDUP.

Fourteen-year-old Ona Dubula, who GroundUp witnessed being shot in the face at close range by police while he hid behind a table during a protest in Hout Bay on Tuesday, had surgery on Wednesday afternoon to remove a second rubber bullet that had been lodged under his tongue for more than 24 hours. This is the latest in a series of incidents in recent years of police heavy-handedness in Hout Bay.

It is unclear whether the South African Police Service (SAPS) is investigating the shooting of Ona Dubula. A SAPS statement issued on Wednesday said only that “it is alleged” that a 14-year-old boy was injured during the protest and taken to the Hout Bay fire station for treatment.

SAPS spokesperson Captain FC Van Wyk said: “We urge the guardian and/or parents of this boy to come forward to open a criminal case to be investigated.”

SAPS didn’t respond to multiple questions from GroundUp asking whether police were investigating the incident and what action was being taken, following the release of graphic footage documenting the shooting.

Ona was hit with at least four rubber bullets – two hitting his ribs and cracking them, and another two hitting his mouth. He had ventured to the protest from about 3km away in Imizamo Yethu where he lives.

GroundUp visited Ona and his mother Pinkie in Groote Schuur on Wednesday.

In the video, taken by Hangberg resident Peter Parker Michaels, Ona can be seen removing something from his mouth and dropping it on the sand shortly after being shot. GroundUp understands that this was one of the rubber bullets. Another was lodged beneath his tongue. While GroundUp was at the hospital, Ona was wheeled into surgery to have the bullet removed under general anaesthetic. At the time of writing it is not yet clear if his tongue will fully heal.

Pinkie, his mother, said she wanted to open a case against the police. She wanted to keep the bullet as evidence for reporting the case but was told by hospital staff that this was not permitted. Instead the bullet would be kept for the investigation.

She said she also received a call from someone claiming to be from the police who said they would be sending a detective to take a statement from her because a case had already been opened “on her behalf”.

Ona has been able to speak, albeit with a slurred voice. He managed to speak to his grandmother on the telephone on Tuesday night, Pinkie said.

During Tuesday’s protest in Hout Bay over fishing quotas, Hangberg resident Clint October was arrested and allegedly beaten by the police, allegedly for holding a petrol bomb. GroundUp witnessed several petrol bombs being hurled at police vehicles after the protest turned violent.

October’s mother, Tessa, said three police officers had bashed down her front door in pursuit of her son, before beating him repeatedly with rifle butts. She said that the police also pointed a gun at her two children.

It is understood that October will appear in the Wynberg Magistrates’ Court on Thursday on a charge of public violence.

Over the last few years there has been a number of cases of police allegedly using excessive force on protesters in the Hout Bay area. GroundUp has sent a number of questions to the Independent Police Investigative Directorate (IPID) about these incidents, but was told that they would not be answered immediately as the IPID spokesperson was currently appearing in Parliament.

Photo 1: A police officer points his rifle at people hiding behind a table in Hangberg on Tuesday. One of the people hiding was Ona Dubula. Photo: Justin Sullivans