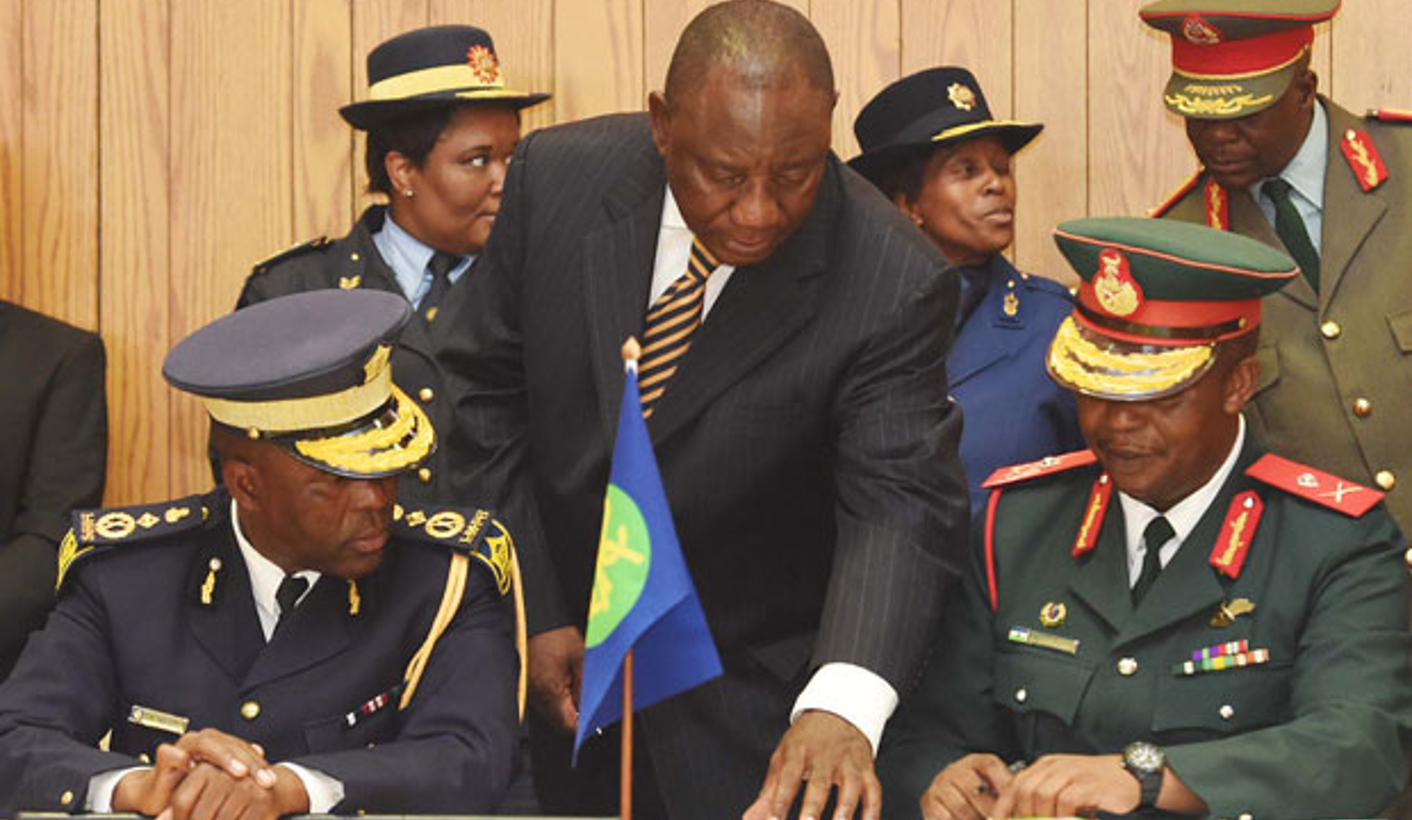 Lesotho, the volatile mountain kingdom in South Africa’s belly, exploded into political violence again on Tuesday as an army commander and two senior officers were killed in a shoot-out at an army barracks in Maseru. By PETER FABRICIUS and KRISTEN VAN SCHIE.

The deaths of Lesotho Defence Force commander, Lt-General Khoantile Motsomotso, Special Forces commander Lt-Colonel Tefo Hashatsi and Lt-Colonel Bulane Sechele are the latest chapter in a political and military vendetta between Prime Minister Tom Thabane and his rivals that has destabilised Lesotho for several years, according to sources.

Thabane himself confirmed the “unfortunate and untimely death and a totally illegal one” of the three officers, which he said had happened around 09:00 on Tuesday.

He did not elaborate on the causes of the shoot-out but said the army remained “100 percent” in control of the acting army commander, Major-General Lineo Poopa.

Sources have expressed concern that the killings could spark wider conflict between members of the two factions represented by the killed officers and called for urgent intervention by regional governments through the Southern African Development Community (SADC), which has been supervising attempts to stabilise Lesotho for the past three years.

President Jacob Zuma expressed his “revulsion” at the “senseless and regrettable killing” of Motsomotso, “reportedly by an army officer… especially because his killing happens two years after the killing of former Lesotho Defence Force Commander, Brigadier Maaparankoe Mahao in June 2015, thus creating a dangerous pattern in the Kingdom of Lesotho”.

Tuesday’s shootings and the 2015 murder of Mahao are intimately related, Lesotho sources said, claiming Hashatsi and Sechele went to Motsomotso’s offices in the Ratjamose barracks on Tuesday morning after hearing they were about to be arrested for their alleged complicity in that killing. When Motsomotso told them they would have to submit to the arrests, they shot him and were in turn shot by his bodyguards, the source alleged.

Zuma said SADC would dispatch a ministerial fact-finding mission to Lesotho on Thursday to assess the situation and determine what intervention was needed. Previously the SADC Oversight Committee and South Africa’s deputy president Cyril Ramaphosa were mandated to “conduct a multi-stakeholder national dialogue before the elections of 3 June”.

The sinister figure of former army chief Lt-General Tladi Kamoli also lurks behind Tuesday’s dramatic events. Appointed in 2012 by Thabane’s predecessor, Pakalitha Mosisili, Kamoli was behind a 2014 coup attempt after Thabane fired him as “disloyal” and replaced him with Mahao.

After military and diplomatic intervention by South Africa and SADC, new elections were held in 2015, which Mosisili won. He reinstated Kamoli as army chief and in June that year Mahao was shot dead.

Kamoli, Hashatsi and Sechele were all implicated in the killing by an SADC commission of inquiry which demanded that Mosisili fire Kamoli and take legal action against the officers involved.

Mosisili never did pursue legal action, but in December 2016 replaced Kamoli with his deputy Motsomotso, who was considered loyal to the pair. After Thabane returned to office in another snap poll in June 2017, Motsomotso switched his allegiances, a source alleged.

At a press conference on Tuesday afternoon, Thabane said he had not heard anything of Kamoli since re-assuming office in June. DM