Question time with Zuma: A box-ticking exercise masquerading as oversight 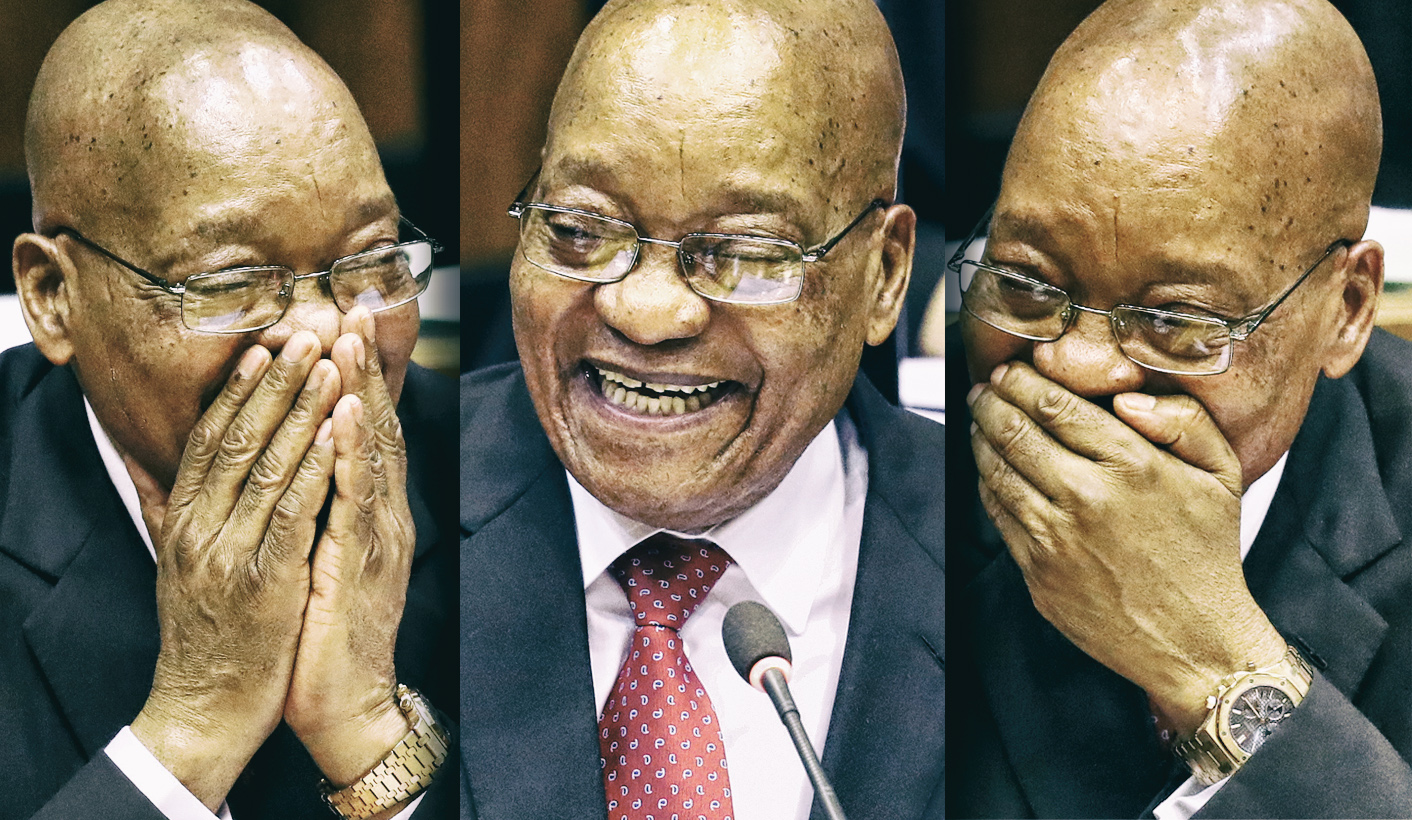 Presidential question time in the National Assembly on Thursday turned into yet another box-ticking exercise. President Jacob Zuma in the House? Tick. President at the podium? Tick. President reading prepared replies on his administration’s achievements in response to ANC sweetheart questions? Tick. President side-stepping questions on accountability? Tick. All dressed up as being part of Parliament’s constitutional oversight mandate? Tick. By MARIANNE MERTEN.

Two things have changed since the last presidential parliamentary question time on 22 June, and both are linked to the secret ballot of the motion of no confidence in Zuma on 8 August. The motion was defeated, but the margin of 198 votes against, 177 for and nine abstentions was the closest yet and showed that at least 35 ANC MPs broke the party line of voting against the motion, which the governing party styled as an opposition regime change push, to support the no confidence in Zuma vote or abstain.

Most obviously, the EFF was back in the House, having lifted its boycott of sittings involving Zuma, the politician it describes as a “constitutional delinquent” in a move to hold him accountable. Less obvious, but nevertheless telling, was a rather flat-lining Zuma, reassured that his governing ANC had used its numbers in the House to defeat the no confidence motion, but also aware that the days of full control are over.

Ructions were expected. The presiding officers had several prepared statements on rules and behaviour at hand, while questions and follow-up questions to Zuma from the opposition benches dovetailed nicely.

It all started with the EFF questioning Zuma’s legitimacy of being in the House. EFF MP Godrich Gardee kicked off with, “Once more again we are called in this House to be addressed by a person the highest court of the land has found to have violated the Constitution,” in reference to the March 2016 Constitutional Court Nkandla judgment. “Explain to us why the father of Duduzane is coming here to address us…”

And the EFF highlighted the lack of action for over a year on its request to National Assembly Speaker Baleka Mbete, who is also ANC national chairperson, for disciplinary action against Zuma following that court ruling.

Questions by the DA, IFP, EFF and Cope during the presidential Q&A slot highlighted the contradiction between the presidential preferred positive delivery narrative and what is talked about in the public domain – be it #GuptaLeaks, State Capture and related affidavits submitted to police related to a swathe of criminal charges laid against ministers and senior public servants or media reports on behind-the-scenes potential influence peddling meetings.

On questions whether he influenced any state department to award contracts to his son Duduzane Zuma or other relatives, Zuma said, after some giggles: “I wish to make it categorically clear that I have never instructed or directed any state institution to give contracts to anyone whatsoever.” And this was repeated on a follow-up question: “I’ve never sat in a meeting with a person whose name I do not know. I’ve never sat in a meeting to ask to help Duduzane.”

However, in a 2009 meeting with Department of Mineral Resources senior official Jacinto Rocha, according to the Sunday Times, Zuma is to have said, “Duduzane is my only child involved with money. I will appreciate if you could help him wherever you could”. This, along other with other incidents, has been included in an affidavit Organisation Undoing Tax Abuse (Outa) submitted to police when it laid charges of treason, racketeering, extortion, fraud and forgery in early August.

Brent Simons, who worked for the minister in the presidency and the Public Service and Administration Department, submitted an affidavit to Mbete that the president had misled the House previously on this score. According to The Times, Simons said in 2014 he had witnessed Zuma sending relatives to ministers “with a clear instruction to help these family members secure contracts where possible”. The Office of the Speaker, according to the newspaper, confirmed receipt of the affidavit.

On Thursday, a follow-up question on whether the president would lay charges against Simons, or anyone else who had put him at the centre of State Capture, was simply left unanswered. And that opened the door to the DA and EFF to hammer home the point that presidential question time was a show as Mbete tried to gloss over the barrage of objections and move on to the next question.

DA Chief Whip John Steenhuisen, in a series of points of order, argued that the president in failing to answer a specific question on legal action “frustrates the process” and meant the House was failing. “We are not unhappy about the response. There has been no response. He is refusing. You have to put this institution before this person.” EFF leader Julius Malema jumped in: “He (Zuma) must answer the question… If there are no words coming out of the mouth of the executive… What is the point?”

But Mbete remained adamant. “It is not possible for the chair to prescribe to the executive how to answer…”, adding later: “He has answered. There’s nothing I can do.”

In contrast, Zuma’s responses to the three ANC sweetheart questions, and follow-ups, were extensive. These allowed the president to deliver what essentially were pre-scripted summaries of various government media releases on BRICS, Operation Phakisa and the presidential Siyahlola monitoring programme.

“Outside my knowledge set” was the response to questions as to why Zimbabwean First Lady Grace Mugabe was given diplomatic immunity after a case of assault was opened with police against her for beating a young South African with an electric extension cord. “I’m not a lawyer. I don’t know the points of law and I was not involved,” said Zuma.

Parliament is a political institution where over the past years the edges have sharpened. And such dynamics are reflected in the style of presiding, which cannot be disassociated from the political turmoil in the governing party. And the relationship between Parliament, where the ANC is the majority party, and the ANC executive.

Mbete’s turn at the helm of proceedings was frequently contradictory. She addressed MPs by name when earlier she ruled against Zuma being called uBaba ka Duduzane [father of Duduzane] because rules stipulated everyone be called “Honourable” or by their title, not by their household name. And at one stage she simply told opposition MPs, “Hlala phantsi, wena [Sit down, you!]”.

Her deputy Lechesa Tsenoli was quick to cut off mikes and to ultimately call in the chamber support officers, dubbed widely across Parliament as “bouncers”, to remove several EFF MPs. The party walked out before it came to a repeat of the chaotic violent scenes so often seen before.

However, Tsenoli simply kicked for touch when it was pointed out that ANC MP Mervyn Dirks, who earlier had denied flashing a middle finger at the opposition, was caught on television visuals as having done so. “He’s been caught on the parliamentary channel. With middle finger up. Not only did he act unparliamentary, he lied to you,” complained Steenhuisen, holding up his mobile phone. But Tsenoli replied: “That matter and the use of cellphones in the House will be addressed by the relevant committee.”

After Thursday’s parliamentary box ticking, complete with giggles, a quote from Alice in Wonderland might come in handy to describe South Africa’s existential predicament: “Now, here, you see, it takes all the running you can do, to keep in the same place. If you want to get somewhere else, you must run at least twice as fast as that!”

Question is: where to go? DM