Op-Ed: ‘Jailbird’, Sergeant Joubert and me 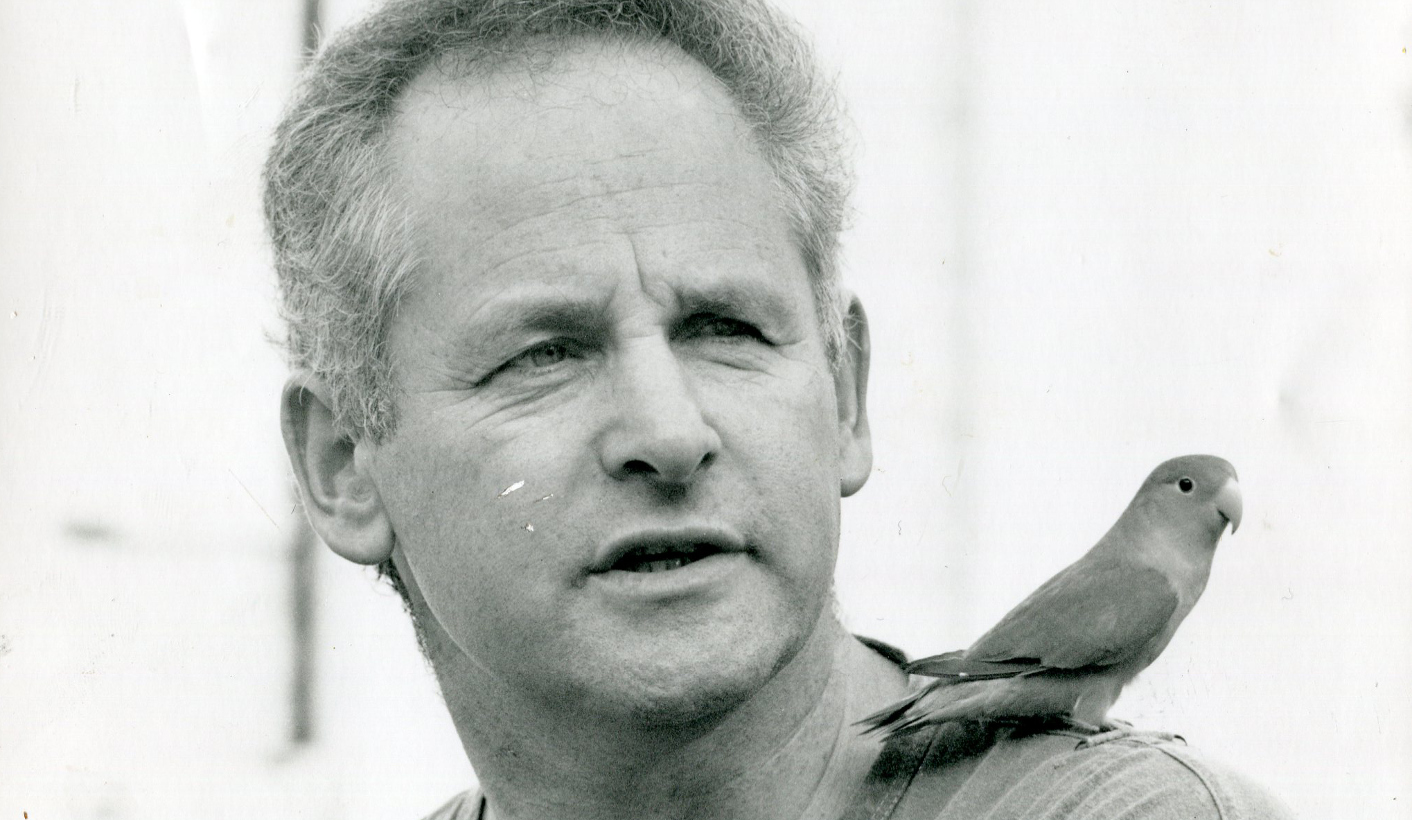 When I was in prison I encountered brutality, laxity and kindness, in the form of torture by the security police, relative indifference by many prison warders and sometimes kindness. One warder who treated me kindly was Sergeant Bertie Joubert, who made life easier for me in my second period of imprisonment when we were allowed to hold money. He would buy me fruit and dried boerewors. After an extended period in solitary confinement I was given permission to buy a love bird/parakeet and Joubert brought the bird to me in a shoebox. I trained it to sit inside my tracksuit as company. My relationship with Joubert, who I recently met again, was an example of a sense of common humanity that transcended prison bars and ideologies. By RAYMOND SUTTNER.

Recently a relative phoned and said “Bertie Joubert” sends regards. I asked who this was and he said he is the warder who got me a lovebird/parakeet when I was in prison. I did not know his first name but it turned out to be Sergeant Joubert. He had always been kind to me when I was held during the states of emergency of the 1980s. He was in charge of the prison “shop” and went to great trouble to buy me fruit and dried boerewors outside the prison.

That was my second period in prison. In 1975, when I was a lecturer in Durban I had been arrested for ANC/SACP underground activities and tortured with electric shocks by the security police. I was then charged and convicted and spent eight years in jail, until May 1983.

I had planned to leave the country on an exit permit, that is, without a passport, not being allowed to return. This was because on release many faced heavy restrictions, making political activity very difficult. But we – as political prisoners in Pretoria – concluded that the situation had changed under PW Botha, who became Prime Minister in the early 1980s. It was possible that I would not be restricted. I was needed for political work inside the country.

I feared being re-imprisoned but agreed with the reasoning. I said to myself: if I was wholly committed to liberation of the people of South Africa, I could demand no less of myself than black comrades, who remained in the country after release or lacked the resources to leave.

At first, I operated with a fairly low profile, as an academic, but after a while I wrote and gave speeches on the Freedom Charter and became active in the UDF, especially in the period of “ungovernability” and “popular power”. During the “short” eight-month state of emergency of 1985-86 I went underground to avoid arrest, though I continued my activities – re-emerging again when the emergency was lifted, although not staying where I had been before. In June 1986 a state of emergency was re-introduced and this time I was held for 27 months, 18 in solitary confinement.

To the prisoner there was a big difference in being held by different authorities: the security police, in a police cell, in a prison as an awaiting trial or sentenced prisoner or as a Terrorism Act or state of emergency detainee.

The security police, unlike warders, were often highly motivated to address the threat we represented and did not spare their energies, whether in assaulting us or other aggressive and often unlawful conduct.

My overall experience of the security police was of viciousness and sadism, although some who interrogated me in the 1980s were fairly sophisticated and engaged me in debate over my ideas on popular power (possibly with a view to bringing related charges). Absence of violence may have been because they did not think I had information on clandestine activities.

When I was tortured in 1975 there was no identifiable sense of common humanity between the torturers and me. I was enveloped in an atmosphere of violence and terror. They wanted information and I was tortured because I refused to release this.

When convicted, in November 1975, I expected to join other white political prisoners (held separately from black prisoners) but instead spent three-and-a-half months in solitary confinement in Pretoria Maximum Security Prison (the death cells). “Maximum” was an unpleasant place, where one had no direct view of the sky, seeing glimmers of it through mesh wire above the exercise yard. Warders with rifles patrolled above and I was alone, in an atmosphere of hostility. Alone, with the constant singing of the “condemned”.

One day I returned to my cell to find 10 security police. One was a notorious torturer “Spyker” van Wyk from Cape Town, who appeared to relish his reputation and the fear, he sensed he induced in me. They interrogated me about underground units in Cape Town. I knew nothing but had no idea what they thought I knew and feared what could happen. My lawyer said there was nothing to stop them from interrogating me after sentence, though he knew no precedent. They suddenly stopped coming, though I did not know it had stopped. What is fearsome about torture and interrogation generally is one does not know it has ended.

When I joined the others in Pretoria Local, earlier prisoners had mitigated the harshness of the 1960s. Although conditions were difficult-especially denial of all news – an atmosphere of “peaceful co-existence” reigned between the prisoners and the “boers”. We did not have the emotional resources and energy for constant battles and they also preferred peace, having some respect for our capacity to create “drama”, including arguing, writing complaints and calling lawyers.

The authorities had ceded significant areas of control to us. We decided when and how we would clean cells and passages and the pace at which we would work. For some things we still depended on the authorities, battling to enjoy “privileges” to which we were entitled, especially letters, visits and uninterrupted studies.

Before my second detention in June 1986 I had acted more or less legally. I thought I would be released later that month if the anniversary of the Soweto uprising passed peacefully, but I got it wrong. Months and months passed. They gradually released all other white political prisoners in the country. I was alone. They held leaders as long as possible in order to restore “governability”.

I had thought that I could “handle” solitary because my previous fairly lengthy periods had been manageable, but this time I became more and more depressed, though reluctant to admit it initially. At first, I relied on intellectual work to get by but it became more and more difficult to concentrate. Every day I was weary and depended more and more on physical exercise to survive. I ran so much in a confined cement yard that I needed an operation on my knee.

As the months went on and on, solitary gradually wore me down. Letters seldom arrived. There was hardly anything getting through the prison walls. Near the end of my detention, the authorities started to worry about my psychological condition. They were not concerned about my well-being, but worried that they might land in trouble if anything happened to me. I took advantage of the situation to apply to have a pet, confident it would succeed. I had seen that sentenced prisoners had pet birds and I successfully applied to have a pet lovebird/parakeet.

One day Sergeant Joubert arrived with this beautiful little red-cheeked parakeet in a shoebox. A gangster-prisoner serving a long sentence (who asked to be called the Godfather or “GF”), with whom I had unofficial but regular contact, explained how to clip the wings so the bird could not fly away. It was then a question of training it. I held the bird and it bit me. I let it carry on biting, even though my hand was very sore, to get it used to me. After a few days, it relaxed, and spent most of its time under my tracksuit or on my shoulder. It was wonderful having this beautiful little creature with me. Its head smelt like a baby and it had no one else in the word besides me. I called him “Jail Bird” or “JB”.

I bought a cage through Joubert. When I put the bird inside, it would pace up and down, much like prisoners did in their cells. When it was time to sleep, I would put a towel over the cage and JB would sleep.

We were inseparable. The bird would eat out of my mouth. The moment it heard me open a “granola bar” packet it stuck its beak into my mouth. When I exercised, the bird would sit on my shoulder. If it was angry with me, it retreated into my tracksuit, and sat there. If I tried to touch it, JB would bite me.

I met with Bertie Joubert a few weeks ago for the first time since my release in 1988. He told me he had tried to make contact through Wits, where I had worked at the time of my detention, and other ways. We are very different people. Separated by prison bars and different experiences, we nevertheless share a common humanity. DM

Raymond Suttner is a part-time professor at Rhodes University and emeritus professor at Unisa. He served over 11 years in prison and house arrest for anti-apartheid activities. His prison memoir Inside Apartheid’s prison has recently been reissued with a new introduction covering his more recent life outside the ANC, by Jacana Media. His twitter handle is @raymondsuttner