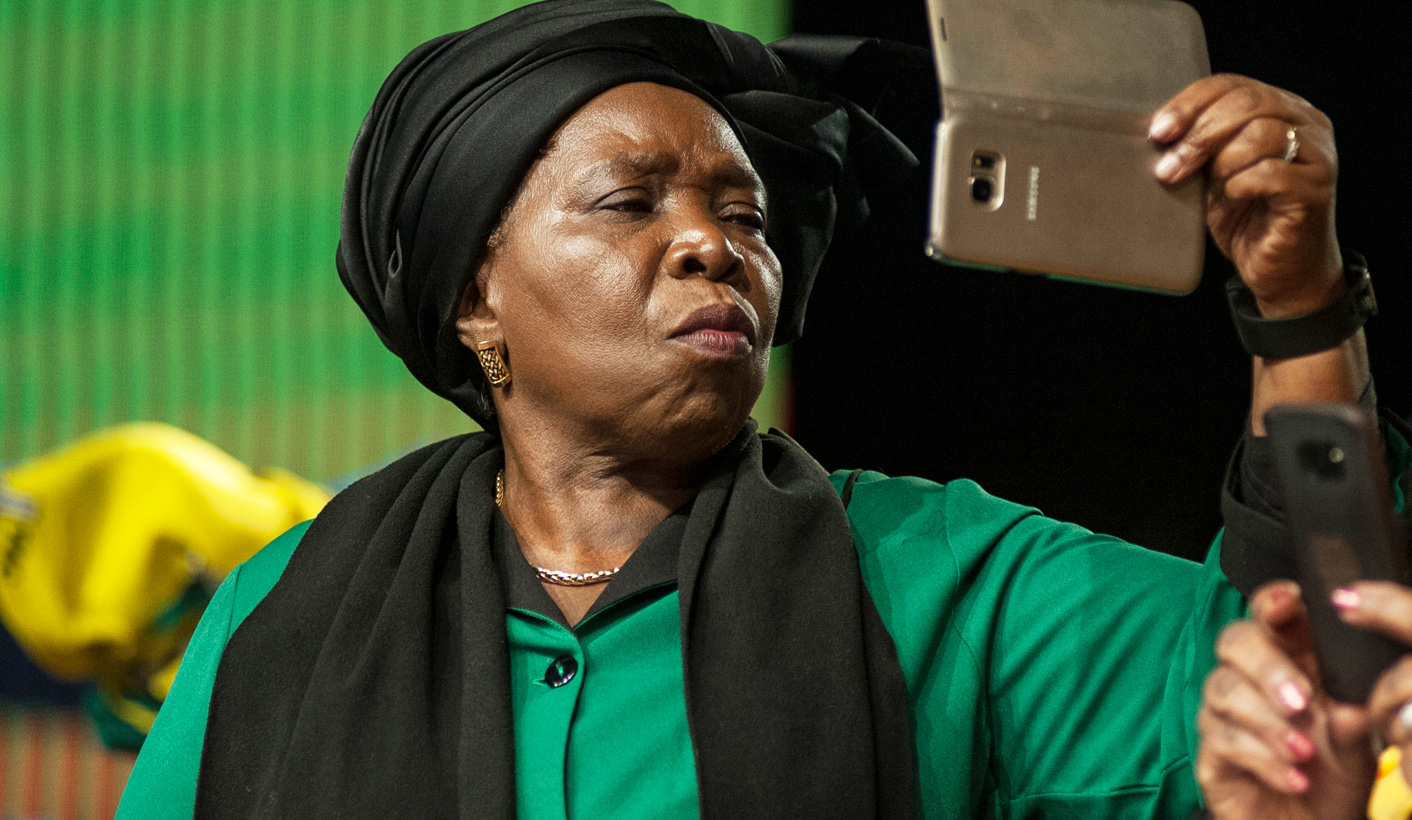 Presidential hopeful Nkosazana Dlamini-Zuma has just scored another victory after the newly elected ANC Youth League leadership in Limpopo province declared that it would support her. But all is not what it seems, with the conference in Cyril Ramaphosa’s home province said to have been the “most stolen” of all league's gatherings. By CARIEN DU PLESSIS.

Those in the know say it’s the “most stolen” ANC Youth League conference they have ever seen. In an organisation that has seen its fair share of bum-baring and elections-rigging, this is no mean feat. First, they say, there were no real branches present from the actual Youth League in Limpopo. Only 34 out of the 400 branches in the audit report before the conference were said to be real (that’s less than 10%), but the report was signed off anyway.

Some of the delegates were also said to have walked around with tags containing their photos matched with someone else’s name, which means the incumbents probably recruited these delegates to come and vote for them using the names of legitimate members – but we’ve heard this one done at conferences before.

When the conference did happen, the guy who was re-elected chairperson, Vincent Shoba, “graduated” dramatically on the day that the actual voting took place. The result was backdated to the Saturday, when many hungry and tired delegates apparently left, rather fed-up and unmotivated, before the voting could take place.

In normal language, that means he turned 36 – too old to be a Youth League leader – on the day he was elected.

If the rules for youth were applied strictly, he would not have been eligible, but this issue explains the urgency of the conference – and why no more time could be wasted on the branch auditing process. Conference preparations might miss deadlines, but birthdays never do.

Newly re-elected provincial league secretary David “Che” Selane told Capricorn FM on Monday night that the provincial executive committee was fully legitimate, elected by a determined membership from across the province, and the audit report his foes were referring to was “a leaked report which I can’t account for”.

Jimmy Machaka, suspended deputy provincial secretary, who lost out in the election, reminisced as follows on his Facebook wall afterwards:

“Is the election of a 36-Year Youth leader to lead ANCYL a general acceptance that we are running shot of young people to take the baton forward, What is it that was so compelling that we ignore a cream of young people across the Limpopo and opt for the graduated/graduating ones.” (sic)

Up to now the worst provincial league conference in living memory was in 2010 in Makhado. It saw Julius Malema’s former bestie Lehlogonolo Masoga ousted and later completely expelled from the league, apparently at Malema’s behest.

Masoga’s ally, Thandi Moroka, even disappeared with the credentials documents during the conference, but was later arrested by over-zealous police officials, who got slightly too involved in the party’s infighting (it was during a time when Malema was Zuma’s anointed son and could escape arrest on traffic fines by merely asking traffic cops if they knew who he was). This leadership ended with a whimper when it was disbanded in 2012 around the same time Malema got kicked out of the ANC because he became critical of President Jacob Zuma.

This weekend’s conference was apparently, therefore, even worse than the 2010 one, which was at least not so brazenly “stolen”, detractors say.

Long story short: the guys who are said to have won the weekend’s conference are vocal backers of former African Union Commission Chairperson Nkosazana Dlamini-Zuma. They declared this shortly after being elected on Sunday, but also, in June they hosted an event where Dlamini-Zuma openly accepted nomination as an ANC presidential candidate.

The guys who lost the conference, Jimmy Machaka and his friends, support Deputy President Cyril Ramaphosa – just like the grown-up ANC in the province, apparently.

Machaka yesterday said they were considering court action – a weekend court application to interdict the conference from happening was dismissed due to lack of urgency – but also said they tried approaching the Youth League’s secretary, Njabulo Nzuza. Apparently thus far they had about as much luck getting him to reply decisively to anything as this journalist had when approaching him for comment.

He might have a difficult time, as the Youth League’s national main-man, Collen Maine, himself came to the weekend conference to congratulate the newly elected leadership. Oros was back, this time tasting even sweeter – at least to the Dlamini-Zuma camp.

Officially, Maine still backs Dlamini-Zuma, although unofficially those in the know say he is keeping his options open with Ramaphosa.

Whatever the case may be, for Dlamini-Zuma to have scored this “victory” is significant, seeing that Limpopo is Ramaphosa’s home province and he’d want the region united behind him.

A youth league here that’s vocally behind Dlamini-Zuma could cause divisions, and could further up the pressure it has been putting on ANC provincial chairperson and premier, Stan Mathabatha, to be removed even before next year’s provincial conference (and presumably in time for the ANC’s national elective conference in December).

There is also the need for a tit-for-tat to Ramaphosa’s people for apparently causing divisions in Dlamini-Zuma’s home province, where big shots like former premier Senzo Mchunu and deputy minister of agriculture, forestry and fisheries, Bheki Cele (over the weekend he incidentally took a massive swipe at the Gupta brothers, and also indirectly at Zuma) have been campaigning. They are also hoping for a court ruling in their favour that could disband a provincial executive committee they claim was irregularly elected in 2015 – and which has since as good as run Dlamini-Zuma’s campaign.

With the numbers at the moment fairly evenly in flux, this emotional play has become all-important in the final push towards October and November, when the provinces are likely to submit their nominations for new national leaders. DM

Photo: Nkosazana Dlamini-Zuma takes a photo of delegates singing before the start of the ANC’s 5th National Policy Conference at the Nasrec Expo Centre in Johannesburg, 5 July 2017. Picture: IHSAAN HAFFEJEE