Motion of No Confidence: A tale of two marches 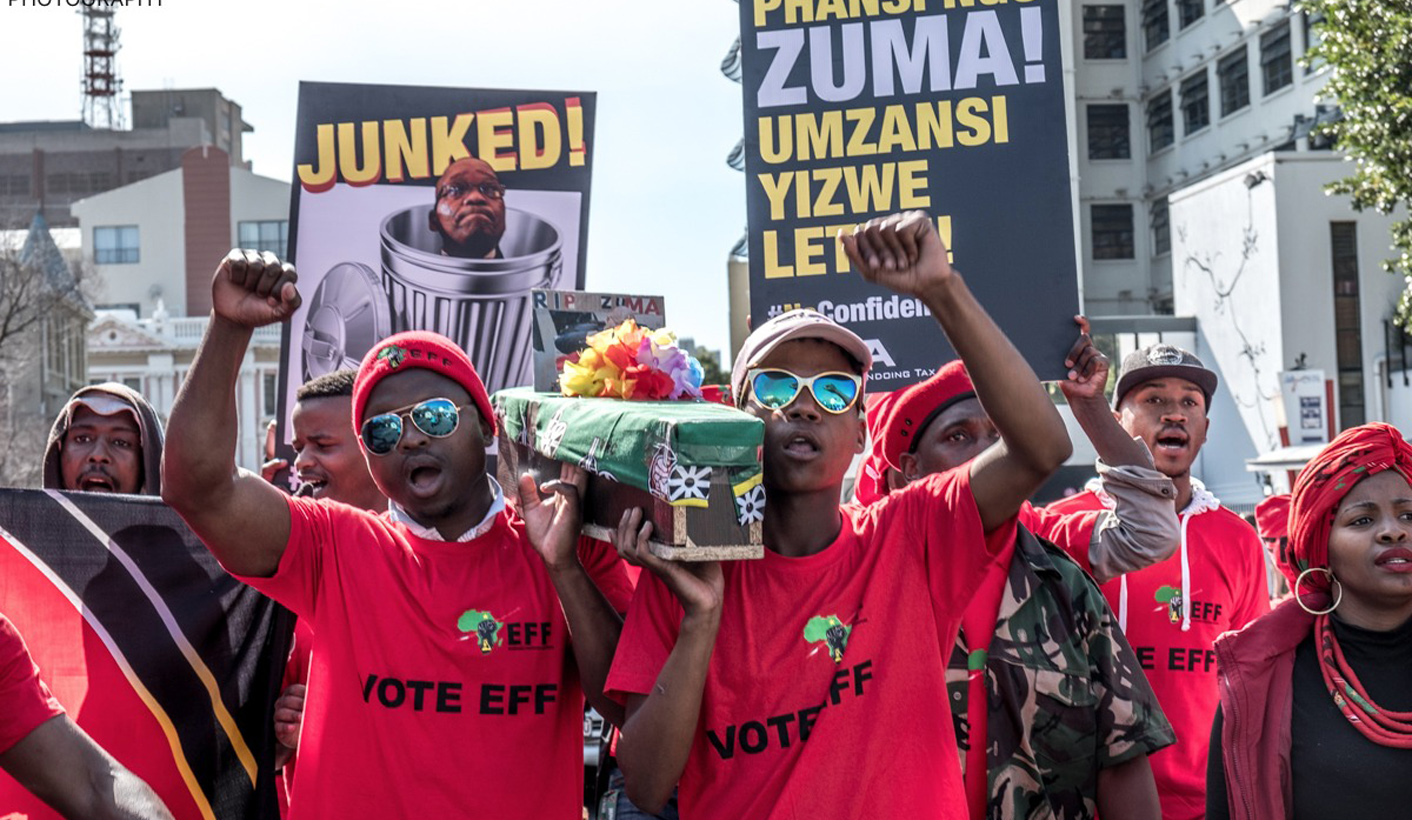 Tuesday was a long day for the supporters of political parties who descended on central Cape Town in their thousands to follow Parliament’s motion of no confidence in President Jacob Zuma. Bar a few minor incidents, the violence many had feared might erupt between opposing parties failed to transpire. In the end, the EFF’s Julius Malema said it best: “Whether you liked or hated the vote’s outcome, peaceful democracy won the day.” By REBECCA DAVIS.

Main photo by Nicky Newman. All inside photos by Leila Dee Dougan

It sounded like a recipe for disaster. As many as 15,000 supporters of opposition political parties were set to gather early in central Cape Town for a march in support of ousting President Jacob Zuma. At exactly the same time, the same number of ANC supporters had been given permission to host their own march in the same area. What were the chances that sparks would not fly?

That they did not, in the end, owes much to sensible decisions by City management and police, together with restraint preached by political party leaders. Special commendation is due to the leadership of the EFF, who took care to defuse what could have been a volatile situation after the vote’s outcome was announced – sending their supporters home in a spirit of optimism and peace rather than one of bitterness and vengeance.

From mid-morning, crowds began to gather at Keizersgracht, Cape Town’s traditional march starting-point. Though they were drawn from different opposition parties, their message was unified and unambiguous: Fire Zuma. A carnival atmosphere prevailed, with the audience jamming to the sounds of local entertainers even while they brandished placards calling for urgent and serious action.

Vendors sold EFF berets at R100 a pop, doing a brisk trade with white youngsters tickled pink by the idea of donning some revolutionary attire. South African flags were also on sale to those feeling an excess of patriotic fervour but who had arrived unprepared. Numerically, DA supporters had the upper hand – but that script was flipped later in the day, with the DA contingent disappearing early and the EFF faithful sticking around to the end.

Outside Parliament, the turf had been divided into two. Left of Louis Botha’s statue: opposition territory. To the right: ANC space. The two factions were separated by barricades, police and several metres: a brutal but effective solution, and a striking metaphor for South Africa’s political divide. Each side had access to a broadcasting truck providing a platform for speakers, and a large screen on which to broadcast Parliament’s proceedings.

The opposition kicked off their rally first. A succession of speakers from coalition groups and political parties reminded the crowd why they were there. Cope leader Mosioua Lekota gave a particularly stirring address, promising the public what would happen next within the National Assembly.

When the MPs entered the House, Lekota promised, “we will forget the towns and cities from which we come… We will think of all of you, the people of our country, who have lost the freedom of your country because you entrusted it to Zuma.”

Former Cosatu leader Zwelinzima Vavi drew a confused parallel between Adolf Hitler and Jacob Zuma, before calling on the president to step down of his own accord before 14:00. This appeal was reiterated by former Greenpeace boss Kumi Naidoo, who added that Zuma should make two further phonecalls: to Russia, to renege on the nuclear deal; and to fire assault-accused deputy minister Mduduzi Manana.

Several speakers made the suggestion that if ANC MPs failed to vote out Zuma, they were demonstrating a complicity for which they would be made to pay come elections. “If they don’t vote [Zuma out], the problem is not Zuma,” Julius Malema warned.

All posters bore the logo of the Inkululeko Foundation: the non-profit wing of military veterans MK, which has previously marched in protest against amaBhungane’s #GuptaLeaks investigation and threatened to lay criminal charges against SACP leader Solly Mapaila for saying that President Jacob Zuma was corrupt. Daily Maverick has previously reported on the capture of the military vets by the Gupta family.

As the ANC supporters gathered outside Parliament, Daily Maverick witnessed a lone DA supporter on the wrong side of the tracks having his “Fire Zuma” poster ripped out of his hands by a man wearing a T-shirt saying ‘Hands off our liberator’, with a picture of President Zuma’s face. The Zuma supporter proceeded to tear the poster to shreds.

No ANC bigwigs were sent out to address their supporters, who had to make do instead with addresses from the likes of tainted MK figure Carl Niehaus, and representatives from the National Youth Development Agency and the South African Youth Council. The crowd was urged to remember that the “enemy” was the Democratic Alliance, which was attempting to dictate ANC policy from outside.

As was the case with the later speeches within Parliament by the ANC, mentions of President Zuma himself were thin on the ground. Instead, the matter was framed as one of ANC autonomy, with the opposition trying to steal power via the back door. It appeared to resonate well with an enthusiastic crowd, who largely demonstrated loyalty to the ruling party rather than the figure of Zuma in particular. One poster summed it up: “Ons Kom Van Ver Af Met Die ANC”, it read – “We’ve come a long way with the ANC”.

As Parliament’s proceedings began, both factions quietened to watch the show unfold as if it were a sports match. Among the opposition supporters – now reduced largely to EFF members – a chant of “Run, Zuma, Run!” went up while the vote was being counted.

When Speaker Baleka Mbete read out the number of “yes” votes as darkness was falling, a cheer went up from Camp EFF, with supporters believing it might be enough to carry the motion. It was not. But before discontent could grow, the Commander-in-Chief was ushered on stage to a hero’s welcome.

Malema’s tone was upbeat. “I’m proud to be South African today, because we tested our democracy and I can confirm our democracy does work,” he said. The results of the vote had shown that “Zuma can be removed without a drop of blood”.

In typical Malema style, he added: “Butternut is finished!”

He had words of consolation for those feeling deflated. “Fighters, you must never be demoralised,” Malema insisted. “We have not lost anything. Instead, we have 35 new votes” – a reference to the ANC MPs who either voted along with the opposition, or abstained. He called on the crowd to disperse peacefully and rise above the taunts of ANC “drunkards” – and the EFF supporters proceeded to do just that.

A more actively celebratory atmosphere prevailed on the other side of Parliament after the vote. As the EFF made their way home, a few hundred of the ANC faithful danced and sang in front of a stage featuring Zuma’s trusted disciples: among them Social Development Minister Bathabile Dlamini, Police Minister Fikile Mbalula, and the aforementioned Niehaus.

A chorus of the traditional Umshini Wam greeted the president himself, who made an appearance after reportedly spending the vote ensconced in Tuynhuys. Switching between isiZulu and English, Zuma presented the victory as a vindication for the party as a whole.

“I’ve just come to say thank you to all of you,” the president said, amid cheers. “You came in your numbers to demonstrate that the ANC is there, is powerful, is big, is difficult to defeat.”

But for those outside the bubble of ANC love, the reaction seemed different. As this journalist hopped into a taxi bound for home, the driver made resigned eye contact in the mirror. “So the Guptas won again?” he said. DM