The Gathering – Media Edition: The BLF’s fringe show fizzles out 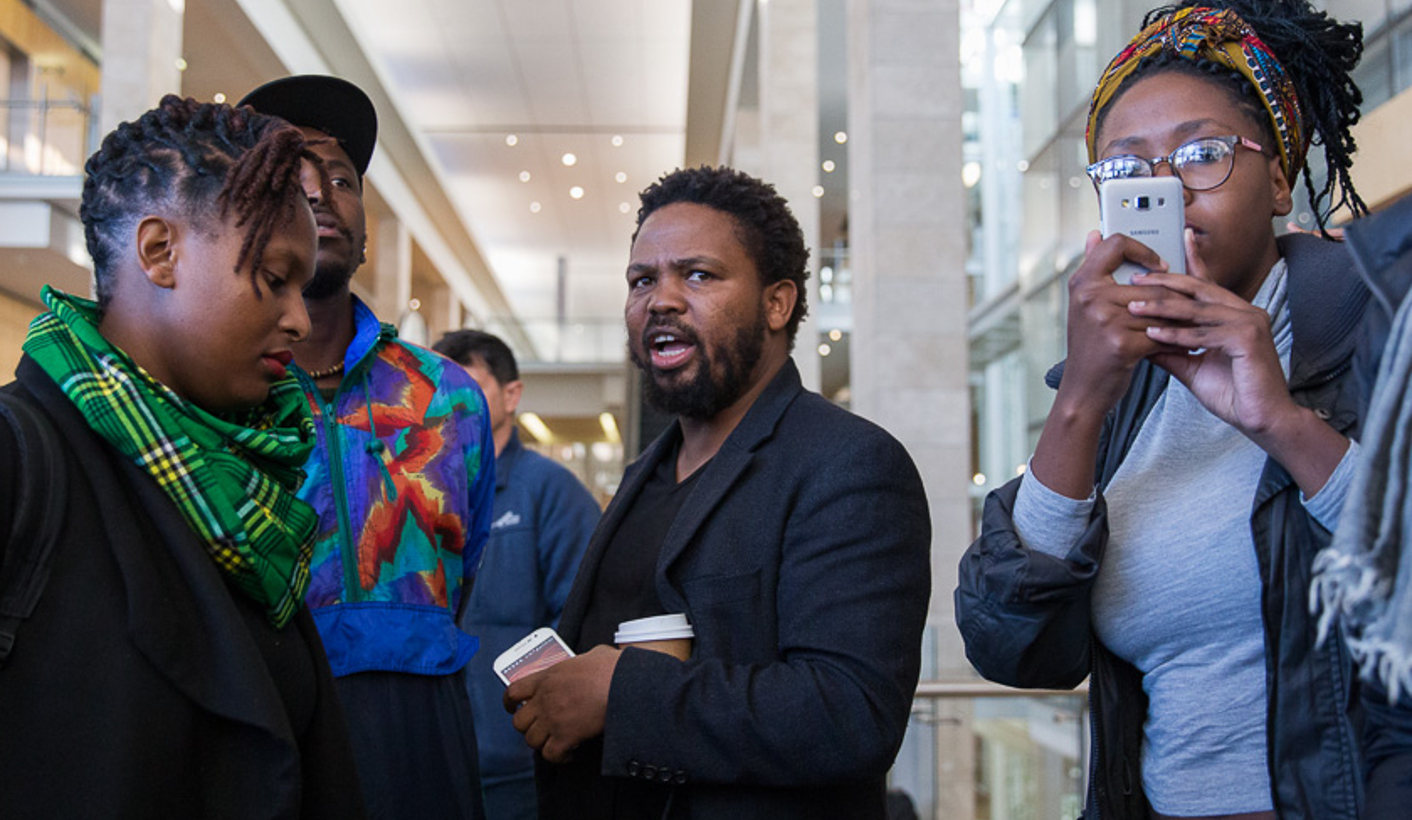 The BLF's Andile Mngxitama tried to steal the show, but departed after a rowdy but hollow cameo appearance. By BHEKI SIMELANE.

A small group of Black First Land First (BLF) members held their own side show just outside the main venue of The Gathering – Media Edition.

Disruptive from the start and barred from entering the venue by security, they started hurling racist slurs at every white person within their sights. And, all the while they were abusing security deployed at the venue.

The BLF, pals of the Gupta family who are at the centre of the conversation at The Gathering, disrupted the event despite a court order interdicting the group from harassing members of the media in the midst of the #Guptaleaks email revelations.

Former Finance Minister Pravin Gordhan and his then deputy Mcebisi Jonas, were predictable targets. Asked what he made of the BLF’s mention of him and Gordhan, with a broad smile, Jonas simply said: “I cannot answer that.”

Both Gordhan and Jonas were scheduled speakers at The Gathering.

The group of about six BLF members, among them leader Andile Mngxitama, continued venting outside the venue, claiming that their own story was the one that needed to be heard.

The group welcomed cameras rolling in their direction, but would not speak to individual journalists without asking them which publication they worked for. Asked why this was necessary, one BLF female member said “because we are watching you”.

The group – which dismiss the media as being funded and captured by WMC – seemed to suggest that if white people were the architects of “white monopoly capital”, this meant that the BLF were also within their rights to align themselves with the Guptas.

It came as no shock when one male BFL leader admitted that: “We love the Guptas, the Guptas are our friends.”

The BLF insults extended beyond slurs into threats. A BLF member made death threats, telling a white security officer deployed at the entrance that he must go and pray for his kids. “Pray that your children are not killed by my children,” he said.

While Gordhan and Jonas got verbally trashed, Mngxitama had high praise for Mineral Resources Minister Mosebenzi Zwane, who has come under fire for some of his policies and involvement with the Guptas. Mngxitama said he was an example of one of the dedicated disciples which the country could not afford to lose.

The group demanded a refund when it became clear they were not going to be allowed in for as long as they were disruptive and abusive. However, seemingly also tired of advancing one and the same argument around race and white monopoly capital, they seemed satisfied with the explanation that they would be refunded.

The group backed off and drove off in in a red Audi that had been parked in the basement. DM

Andile Mngxitama and BLF supporters have their say outside the venue of The Gathering – Media Edition. Photo: Ashraf  Hendricks (Groundup)