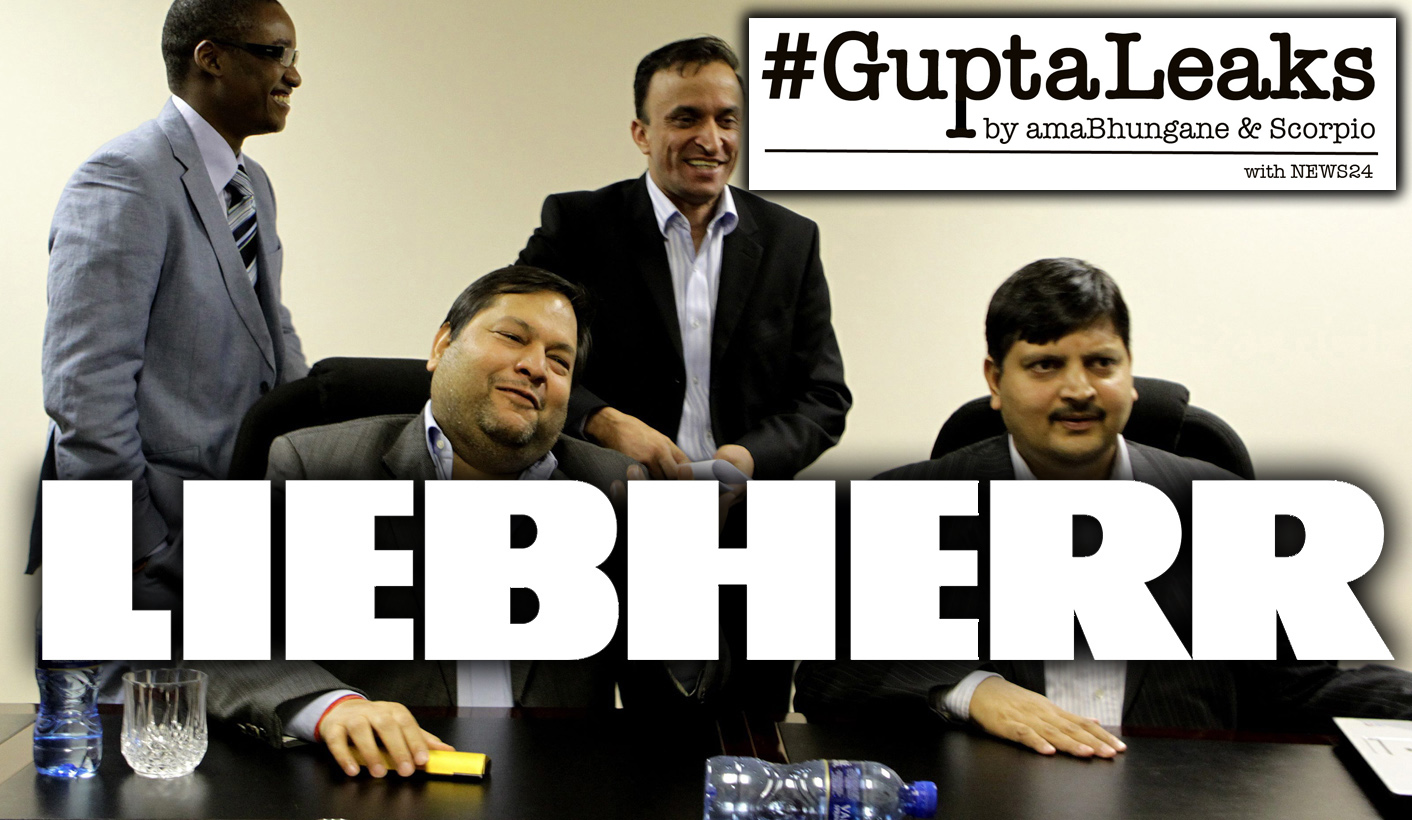 As the #GuptaLeaks and other investigations publicly turn up more evidence, it has become clear that Transnet, with its annual revenue of more than R60-billion, was targeted as ground-zero for Gupta capture. By AMABHUNGANE and SCORPIO.

The #GuptaLeaks have revealed that two more companies that won Transnet tenders paid tens of millions to Gupta offshore fronts.

This brings to seven the number of large, mostly respected, companies known to have secretly paid Gupta fronts in connection with Transnet contracts.

Four years ago, an anonymous tipster told amaBhungane that Transnet crane suppliers were paying off the Guptas to get their contracts.

The tipster said: “The cranes that are being supplied to the ports from [Shanghai Zhenhua] are with Guptas. Ask Liebherr. While they were the preferred supplier, they were approached by Guptas to do a deal who then referred them to their local [black economic empowerment] partners, who in turn spoke to [then Public Enterprises Minister] Malusi Gigaba. By then Guptas had done a deal with [Shanghai Zhenhua].”

Days before the tip-off, Gigaba and then Transnet CEO Brian Molefe had stood side-by-side, grinning behind a giant red ribbon, which Gigaba cut in presentation of seven new Shanghai Zhenhua cranes for South Africa.

On the day, Molefe told reporters the tender was “transparent”.

Molefe later moved to Eskom, which he recently left in disgrace after evidence emerged that he courted the Guptas while Eskom and Transnet closed allegedly dirty deals for the Guptas.

“The company is conducting its own internal enquiry and will investigate all allegations made. Where appropriate, it will enlist the services of independent experts, depending on the required expertise.”

“I can assure you that Liebherr has never had an ‘extensive and direct relationship with the Guptas for years’ as alleged in your e-mail.” But he said the company was “still putting the pieces together” and needed more time.

Shanghai Zhenhua did not respond to questions.

As was claimed by amaBhungane’s tipster, Liebherr’s Gupta payments were indeed preceded by roughly R55-million from the Chinese. In September 2011, Transnet announced that Shanghai Zhenhua would build, deliver and commission seven tandem-lift ship-to-shore cranes for the container terminal at Durban harbour.

According to Transnet documents obtained by amaBhungane, it would pay Shanghai Zhenhua $92-million (about R1.2-billion today) for the job.

Three months later, money started to flow to the Guptas.

Shanghai Zhenhua paid the first tranche of $969,086 (R12.6-million) that December. According to the Guptas’ accounting records, it went to a United Arab Emirates-registered company called JJ Trading.

For every tranche of cash received from Shanghai Zhenhua, JJ Trading transferred exactly 4% to a person called “David”, sometimes as cash. The rest flowed to Gupta front companies in the UAE and South Africa.

The records also reveal how a confidential Transnet document, related to the subsequent tender for 22 cranes that Liebherr won, had been leaked to the Guptas. It is not clear how, but a top Gupta executive then emailed the document to an Indian national associated with JJ Trading.

This is not the first time Liebherr has popped up on amaBhungane’s radar. Last October, amaBhungane linked Liebherr to another apparent Transnet kickback scheme.

AmaBhungane’s investigation revealed that in March 2015, Burlington – a subsidiary of advisory firm Regiments Capital – signed a R5-million contract with Liebherr-Africa to provide it with “market feasibility studies” in relation to the supply of cranes to Transnet.

Liebherr made a R2-million down payment to Burlington, which paid exactly 90% straight on to a Gupta front, Homix.

At the time, Liebherr told amaBhungane that Homix was unknown to it.

It is now clear that Liebherr’s R2-million laundered to Homix was just the tip of the iceberg. The #GuptaLeaks reveal that the family received roughly $4.2-million (R55-million) from Liebherr over the course of eighteen months.

Bank records show that in July 2013 Liebherr paid $905,000 (R11.8-million) to another of the Guptas’ UAE front companies, Accurate Investments.

If Accurate sounds familiar, that is because the Guptas also used it to launder the Free State government’s money to pay for their niece’s notorious Sun City wedding.

Liebherr’s cash lands in the US

Although the South African Revenue Service, Hawks and National Prosecuting Authority remain unmoved by the #GuptaLeaks revelations, the shadow of US regulators potentially looms large.

A significant portion of Liebherr’s cash transferred to Accurate was quickly passed along to relatives of the Guptas in the US.

On 28 May 2014, two days after Liebherr’s last wire hit Accurate’s account, Accurate bundled Liebherr’s money with other funds and wired it all to Brookfield Consultants Inc in the US.

According to its website, Brookfield specialises in healthcare consulting.

Documents contained in the #GuptaLeaks reveal that Ashish and Amol Gupta were respectively 27 and 23 years old at the time Accurate transferred Liebherr’s cash to Brookfield’s account at JPMorgan Chase Bank in New York.

Neither Ashish nor Amol Gupta, nor their father Ramesh, who provided Tony Gupta with Brookfield’s bank account information, responded to any of amaBhungane’s attempts to contact them.

We have seen no specific evidence of Transnet rigging the crane tenders to favour Liebherr and Shanghai Zhenhua.

However, the payments to offshore Gupta fronts and contemporaneous contract awards trace a Transnet tender pattern that is now well known. Liebherr and Shanghai Zhenhua bring the number of Transnet contractors who have paid the Guptas or partnered with their companies to seven.

The contract and other #GuptaLeaks accounting records describe how CSR initially paid JJ Trading and a related Dubai company $124-million (more than R1.6-billion) kickbacks for these contracts. The funds were passed on to Gupta companies.

Recall that Shanghai Zhenhua also paid JJ Trading before the money flowed to the Guptas. In light of the CSR kickback documents, it is possible that similar agreements underlie Shanghai Zhenhua and Liebherr’s crane contracts.

McKinsey: Last year, amaBhungane reported how global consultancy McKinsey won Transnet contracts that were gradually ceded to Regiments Capital and the Gupta-linked group Trillian, which marched off with Transnet contracts worth at least R484-million. Regiments in turn paid R84-million to the Gupta front Homix.

A recent investigation by Advocate Geoff Budlender exposed how McKinsey partnered with Trillian in a “sham” contract that would milk Eskom.

Neotel: In 2015, amaBhungane exposed how telecoms firm Neotel paid tens of millions of rand in “commissions” to Homix to clinch deals worth more than R2-billion from Transnet.

Former Transnet CEO Brian Molefe and CFO Anoj Singh were in charge through most of this. They moved together to Eskom in 2015, where more questionable Gupta deals have been publicly identified.

This week, Transnet was the latest company to promise an investigation.

“Transnet notes recent reports based on leaked emails. Some of these reports cast aspersions on the integrity of the company’s governance processes, especially relating to procurement. Transnet views good governance and the integrity of its processes seriously. In this regard, we have put in place various measures to safeguard this integrity. Any breach or allegation of breach is viewed in a serious light.

“Transnet did not make any payments to third parties and has no knowledge of the alleged transactions. Part of the company’s investigation entails approaching suppliers for their perspective on the allegations.

“Should any actionable facts arise, remedial action will be taken.”

For the second time, the #GuptaLeaks show what look like kickbacks flowing into a Gupta company audited by KPMG.

amaBhungane recently reported how, in the 2014 financial year, public money meant for a community dairy in the Free State was circulated offshore before being channelled through Accurate Investments in Dubai to Linkway in South Africa.

Both companies are Gupta-owned, and KPMG audited Linkway at the time.

The Guptas used some of the dairy money to pay for their now notorious Sun City wedding, which KPMG allowed them to write off as a business expense.

To justify this tax write-off, KPMG later claimed that, based on facts known to it, Accurate was not a Gupta company but was “related to” the father of the Sun City bride.

amaBhungane has yet to discover anything among the millions of pages of documents contained in the #GuptaLeaks to support this.

Liebherr sent the money to accurate in Dubai, where it was quickly bundled with other funds flowing through the Guptas’ Dubai bank accounts and, in part, laundered to South Africa.

In one instance – on 25 February 2014 – Accurate wired money to the Guptas’ Linkway Trading purportedly for “consulting” services.

KPMG did not respond to amaBhungane’s questions about Accurate’s popping up yet again in Linkway’s accounts.

In sum – during the financial year ending 28 February 2014 – funds originating from at least two government entities, the Free State and Transnet, were laundered via Accurate in the UAE to Linkway on KPMG’s watch.