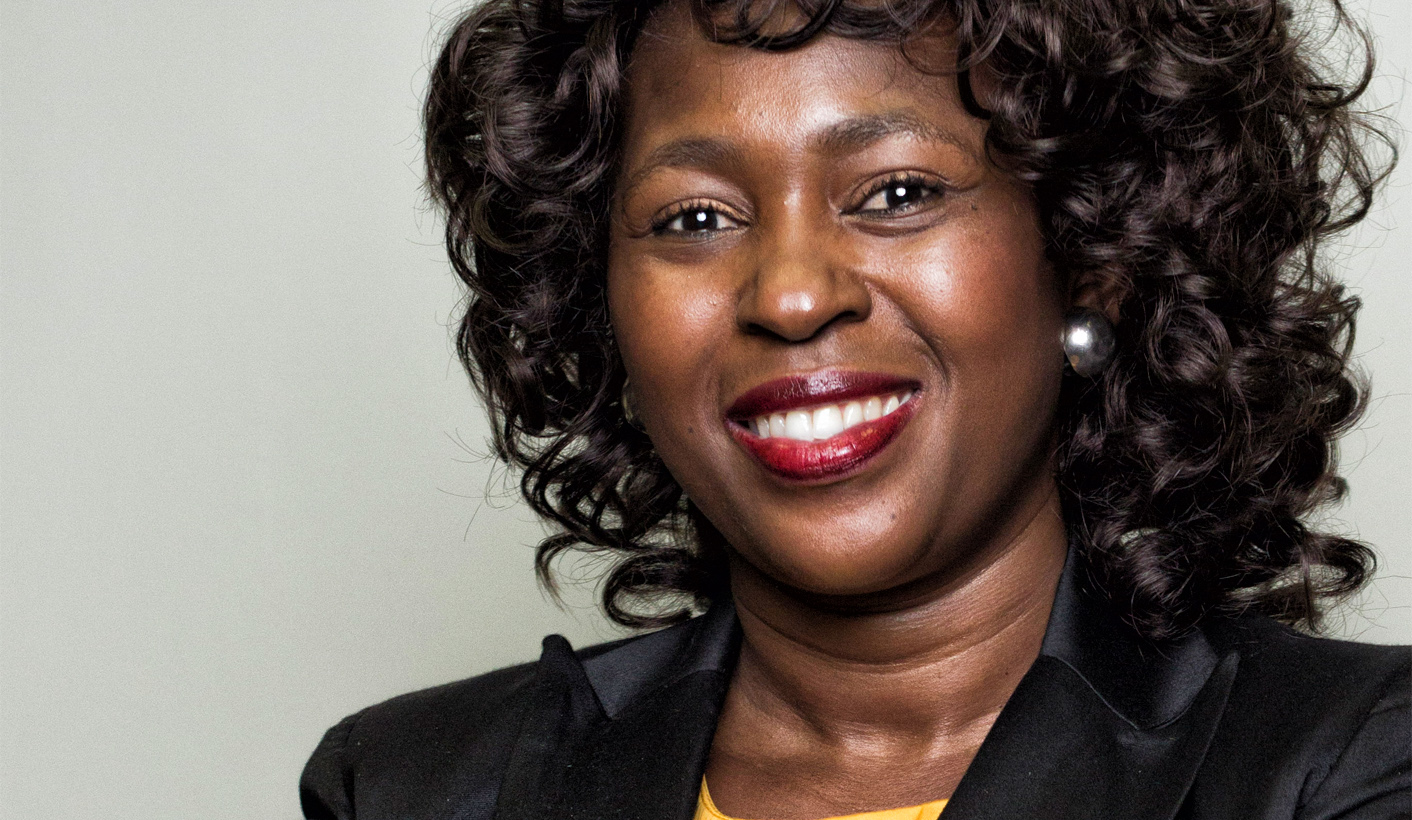 ANC MP Makhosi Khoza says she’s speaking out “because I think I know why I am here (at Parliament)” as a public representative. Right now that is in favour of a secret ballot in the upcoming 8 August vote of no confidence in President Jacob Zuma. Speaking to Daily Maverick on the sidelines of Tuesday’s public debate on this, Khoza added: “I am standing for what is right within the ANC state of paralysis.” But stepping out of the party line comes at a cost. By MARIANNE MERTEN.

The ANC powers that be have yet to make a decision on whether to discipline ANC MP Makhosi Khoza for her outspokenness outside official governing party structures – from calling for a secret ballot in the vote of no confidence in President Jacob Zuma on 8 August, to some sharply critical comments on the troubled state of the ANC and its MPs.

Described by ANC Chief Whip Jackson Mthembu as “extremely ill-disciplined” for her public comments on the sidelines of last week’s ANC national policy conference, the ANC in Parliament on Tuesday confirmed the matter has been referred up to Luthuli House head office for a decision on what to do next. Not only has Mthembu taken exception, it is understood also that ANC Secretary-General Gwede Mantashe is annoyed.

After Mthembu issued a scathing media statement, saying his MP was casting aspersions on the morality of party colleagues – “We have again spoken to comrade Khoza and raised our extreme discomfort with her utterances in relation to caucus and the leadership of the ANC at large” – Khoza took to Facebook, again:

It’s not necessarily a case of going rogue. For Khoza, speaking out is also a way to protect herself. She’s received death threats while on a parliamentary oversight trip to Limpopo, has threats directed at her daughter and has faced other bullying tactics, like the provincial ANC Youth League posting her home address on social media.

“I remain vulnerable and living under constant attacks, life threats and insults. No protection has been provided to me by Parliament though the ANC knows the volatility of my province, KZN (KwaZulu-Natal). The only reason I’m probably still alive is the heightened alertness of the public on my safety. Let me thank you South Africans for your overwhelming support,” Khoza wrote on Facebook last week. “It should be recalled that I opened two criminal cases at the police stations in Hillcrest and Limpopho [sic] after receiving death threats which have not stopped. I’m continuously stalked and intimidated for voicing my views on the vote of no confidence matter on a daily basis.”

On Tuesday she was accompanied by one of those, whom she described as “some volunteers” looking after her. One of the “volunteers” looked somewhat perturbed at Khoza being mobbed, including by a group of youngsters wanting a selfie, or two or three, and her handling of a tricky question. “Why should my parents vote?” Co-incidentally, her response was, of course they must vote.

The conundrum on a vote of conscience or toeing the party line Khoza faces is not hers alone. Also in a tight spot are several other ANC MPs who have expressed their disquiet privately and publicly.

Ditto members of the ANC alliance partners, the South African Communist Party (SACP) and trade union federation Cosatu, who have come to Parliament on an ANC ticket. Will the ANC line prevail, or will it be the resolutions of their organisations which both called for Zuma to step down that prevail? In the SACP at least there are ongoing discussions around this, according to at least one insider, although only Sunday’s closing of the SACP congress will show whether the self-proclaimed workers’ vanguard will take a firm resolution on how to cast the no-confidence ballot.

Speaking out, like cleaning up the web of patronage-related tenders, can be a dangerous business in a party in which factionalism often goes hand in hand with violence. The SACP has objected to protests outside the house of its Second Deputy General-Secretary Solly Mapaila, the face of anti-state capture from within the alliance, but also violence against its members in Mpumalanga and last year’s killings in KwaZulu-Natal’s Inchanga. Police a year ago announced they were investigating 29 politically motivated killings and attempted murders, including of municipal managers and councillors. In late May this year, Police Minister Fikile Mbalula announced a task-team to look particularly at such killings in KwaZulu-Natal.

Sometimes the response is more verbal as criticism itself becomes a tool in the current factional battles. Zuma delivered a snotklap to ANC veterans, or “so-called stalwarts” as he called them, after they had declined participation in a compromise two-day discussion on the state of the party, rather than the requested separate consultative conference.

How has Khoza become what could be described as the poster woman for a vote of conscience?

In Parliament since 2014 – she was placed seventh on the list from KwaZulu-Natal where she was an MPL – Khoza served in the finance committee, often making insightful interventions, but was largely unknown. Much changed with last year’s interviews for a new public protector to take over from Thuli Madonsela. The hearings of the ad hoc committee she chaired were broadcast live, and as part of canvassing as wide an input as possible, Khoza also interacted with civil society organisations and others.

Khoza now is the chairperson of the public service and administration committee. There, according to News24, she butted heads in May with Minister in the Presidency Jeff Radebe over the quality of the Performance Monitoring and Evaluation Department he heads.

With a Ph.D in administration, Khoza’s currently studying further, and writing a book. On Tuesday she gave just a hint of another level of dynamics in the Byzantine manoeuvrings within the governing ANC, describing it as a “very bad sentiment against clever blacks”.

When the motion of no confidence was first scheduled, former president Kgalema Motlanthe in April indicated that a vote of conscience was not misconduct. Both the ANC constitution and parliamentary rules are silent on this. “Those people are not hirelings of the ANC. They are public representatives. They take an oath as parliamentarians to be public representatives. They can’t be treated the same way as you treat an ANC branch,” he told Daily Maverick.

This issue, like so many others in the ANC from monopoly capital to land reform, highlights the deep fissures in an organisation trying to straddle a rather schizophrenic view of itself – both as a modern political party and Africa’s oldest liberation movement.

Mbalula, in his capacity as the ANC’s head of organisation and speaking at the party’s national policy conference, could smoothly claim: “MPs are sworn in constitutionally. They owe their allegiance to the party.” After stating the ANC could not allow anyone from its ranks to support opposition parties, Mbalula added that if anyone defied the party line the ANC would “deal with it, rest assured, according to the constitution of the ANC”. That means disciplinary action.

For some in the ANC the nature of the vote would not matter: the party line rejecting the opposition no confidence vote in Zuma would hold whether the vote is in the open or secret. Or as last Friday’s ANC parliamentary caucus statement said on voting against the no confidence motion: “We have consistently been on record that we will not vote with the opposition to remove our ANC government from office immaterial whether such a motion is voted upon through an open or secret ballot.”

Whether a secret ballot will give succour to those in the ANC not wanting to toe the party line, or whether it opens the door to manipulation and further secret dealings that could undermine South Africa’s constitutional democracy, will no doubt be a subject of much discussion.

For Khoza it’s clear. “We are not defending ANC policies and noble mission, we are defending a leader who may arguably be described as someone with a chronically impaired moral reflective capacity,” she posted on Facebook on 7 July on the no confidence vote, also arguing: “To remain silent and unprincipled in times of crisis is tantamount to fuelling it. When this happens we subject ourselves to autopilot paralysis.”

And it was what she reiterated on Tuesday night. “I’m already out there,” she told Daily Maverick. And she’ll take the consequences from the ANC, which she calls her political home since the age of 12. DM