ANC Policy Conference: Zuma shows how to win even if you lose 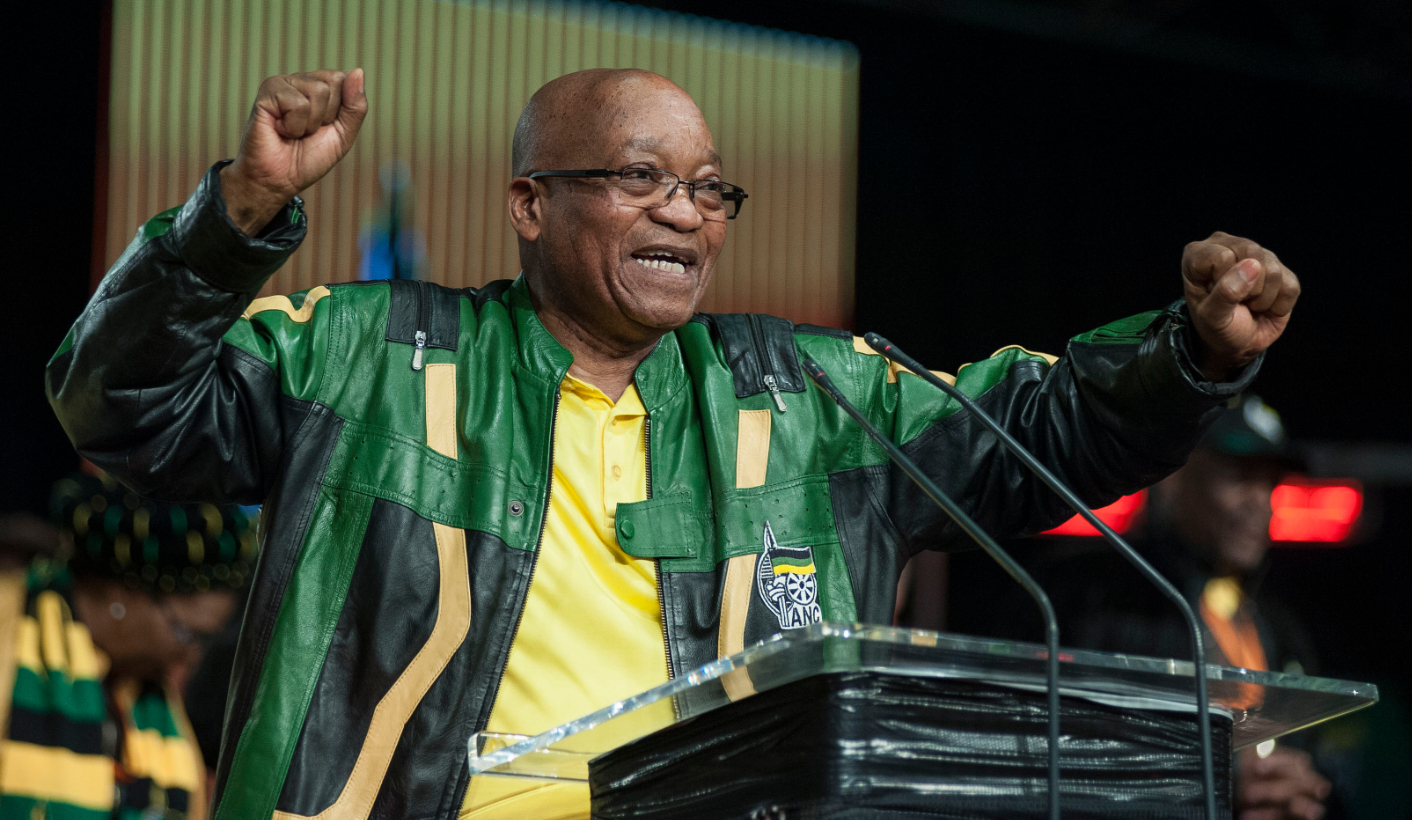 After six days of debating, President Jacob Zuma left the ANC congregation with some more to debate: an enlarged top structure with the option of a second deputy president. Bigger could be better, but it could also just be a double-blind insurance policy. By CARIEN DU PLESSIS.

It was, as usual, vintage Zuma talking at the end of the ANC’s national policy conference at the Nasrec Expo Centre on Wednesday afternoon. Gone was the mean bully who at the opening session on Friday viciously questioned the loyalty and credentials of veterans sitting in the front row, with nothing to lose or gain.

He radically transformed into the sweet-talking, charming version of himself, like a regretful husband pleading with his long-suffering wife to love him still.

There was an olive branch to the veterans and even a giggling acknowledgement of the media – twice – despite his failure to recognise the large media contingent sprawled painfully on the hard floor in front of the stage to be able to see all the action.

It’s good cop-bad cop, all rolled into a larger-than-life president who hits people down with one hand so he could be credited with raising them up with the other.

Zuma started with hints that he was ready to leave his two terms behind. Barring surprises, this is his last closing address to a national conference as the next closing, at December’s elective conference, will be by the new president.

“We felt at our age, because we are no longer young, that the ANC is going to remain in good hands,” he said.

Roughly halfway through his speech he left the script behind for a good few minutes to say what he really wanted to say: “As a practical measure to put an end to the entrenched practice of slate politics and factionalism, branches should consider a proposal to have a second deputy president so as to include the candidate who obtained the second highest votes in the contest for the position of president.”

With this he dropped the kite flighted by ANC KwaZulu-Natal chair and Zuma camp lead campaigner Sihle Zikalala three days earlier, slap-bang in the centre of the battle over his successor.

He drove it hard, saying he’d even act like a commissar, and go from province to province to persuade branches. We all know what happens when he comes near local politics – think Andile Lungisa and Nelson Mandela Bay.

Zuma said the ANC had lost “many talented and capable comrades in whom it invested significantly due to slate politics”. Think Polokwane and Thabo Mbeki’s crowd, whom Msholozi’s guys were just too happy to see the back of (although one or two were retained in the Cabinet until they could no more be endured). They even left and formed “an organisation” – the Congress of the People.

Zuma said there should be “lobbying practices that will allow a unifying electoral outcome” – that is, the first prize would be unanimity and consensus.

The realistic path, however, would be compromise – an enlarged top leadership structure with two deputy presidents.

This would prevent the losers from spending the next five years “working, plotting, working hard, raising money” in a quiet effort to destabilise those who were elected.

“Do we want an ANC that is perpetually destabilised and fighting among itself?” he cooed. “Noooo,” delegates loved him back. “We want a stable ANC, a united ANC, an ANC that can take South Africa forward,” he said. “Yeeeees,” delegates responded, applauding. “For us to succeed we need to get rid of the factions,” he said. “Ha, how,” came the call from among the Zuma-sceptical Gauteng bloc. “How, that is the good question,” Zuma giggled.

Zuma presented the two-deputies proposal with a comical jig, giggle, and a gleeful rubbing of his hands. It left the ANC congregants murmuring, as if in surprise, agreement and disapproval, all mixed together.

Afterwards this topic trended in the talk among delegates.

“I think he did this from a position of weakness. He doesn’t have the numbers. He realises that NDZ will lose in December,” a delegate supporting deputy president Cyril Ramaphosa said.

“Remember we did the same thing in 2012, but Kgalema declined,” the delegate said.

This was during the party’s conference in Mangaung, when Zuma’s camp asked deputy president Kgalema Motlanthe to stay put to prevent him from going head to head with Zuma for the presidency. Motlanthe refused, and Ramaphosa is the history that resulted.

Should Ramaphosa be the loser in the two-deputy scenario, he’s likely to refuse the honour of doing a second term under a presidency that could be run from the Zuma stable. He’s gatvol enough of Number One as it is.

That way the Zuma camp is free to choose two presidents and please powerful people like DD Mabuza, premier of one of the few provinces where the ANC is actually growing in numbers and in government, and Secretary-General Gwede Mantashe, who is in charge of the numbers of delegates going to the December conference.

Both have of late been projecting themselves within party circles as kingmakers disguised as fence-sitters.

Should Dlamini-Zuma lose, under the two-deputy proposal, she would still get to be in the presidency.

The idea has taken root across the camps, with the Ramaphosa-leaning Gauteng also agreeing to it.

Most of the delegates polled, however, thought she was still in the lead following this conference, but they also agreed it had exposed an unexpected weakness in her numbers.

“We were 80-20 going into this conference, and we are 60-40 now,” a pro-Zuma delegate said about his estimation of the percentage of support Dlamini-Zuma had. “Cyril’s guys are a lot stronger than we expected.”

There is Zuma fatigue in some quarters, and also the small problem of Dlamini-Zuma being a woman, and it being hard to convince the conservative rural base that is supposed to be campaigning for her that she is worthy.

Did Zuma make the two-deputy proposal out of a position of weakness?

The timing of Zikalala’s kite was significant. It came on Saturday afternoon, less than 24 hours after a defeat on the plenary floor sent light tremors through the Zuma camp. Provinces that support him – Mpumalanga, North West, KwaZulu-Natal and Free State – tried to block Mantashe from tabling a diagnostic report containing a scathingly honest analysis on state capture and the role of the Gupta family.

When the Ramaphosa provinces fought back, Mabuza withdrew his province’s objection to the report. The temperature of the conference was successfully tested.

There was no whisper of Zuma’s trademark song, Mshini Wami, in any of the open sessions, and although it’s telling of him not being as 100% confident as he had been at moments in the past, the Mangaung conference also took place without the sound of machine guns.

For the rest of his closing speech, Zuma negotiated things like a trapeze artist, giving balance to the compromise positions on key economic fights doubling as proxy positions in the party like land redistribution (ANC must find ways to do it within the Constitution, and even find two-thirds to change the Constitution if necessary) and white monopoly capital (although Zuma made it mischievously clear he still thought the real enemy was the capital with colour).

There were songs of unity as smiling and backslapping delegates broke up into their provincial caucuses to pick up their lunch parcels and catch buses home. The treacherous and somewhat uncertain journey to December has just started. DM