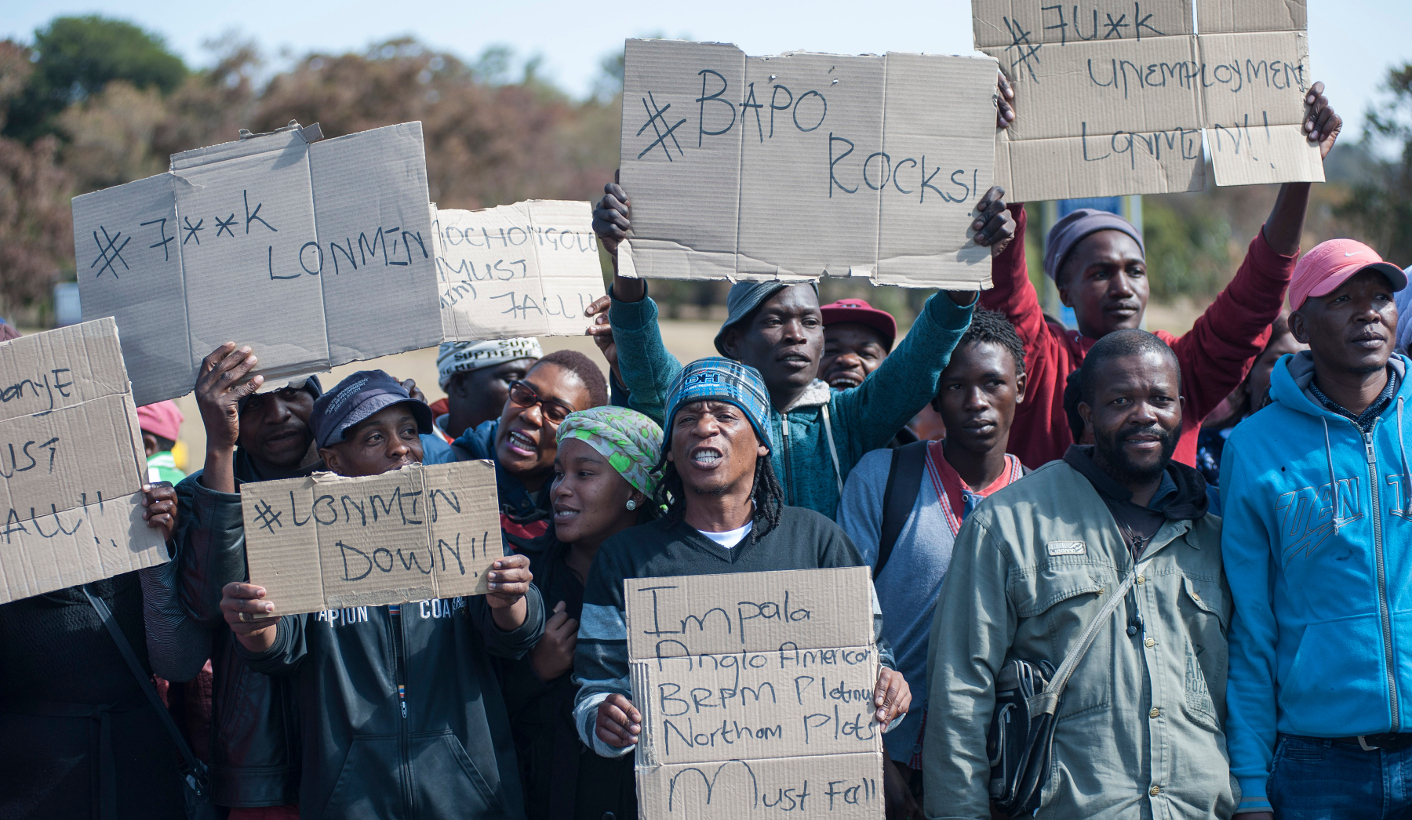 On a day when South Africa’s biggest gold mine, Anglo Gold Ashanti, announced that it was considering retrenching some 8,500 workers, miners from North West province marched on the Johannesburg Stock Exchange (JSE) to demand an end to retrenchments and a fairer share of the economic wealth being extracted by the mining companies operating in the area. By IHSAAN HAFFEJEE.

Sello Seemela estimates that the last time he held formal employment was over 10 year ago. The 40-year-old father of three resides in the town of Bapong in North West. On Wednesday he joined hundreds of fellow miners from mining communities situated along the province’s platinum belt as they embarked on a protest march to the Johannesburg Stock Exchange (JSE) where they demanded an end to retrenchments.

“These mining companies make promises saying they will employ locals to work in the mines but what we find is that they are bringing in people from far away and the locals are suffering,” said Seemela. “The mining companies are getting rich off the land on which we live but we have nothing. Not even jobs. There is so much unemployment. That is why people could come to this march today – because they have no jobs to go to.”

Photo: Police escort the protesting miners through the streets as they make their way towards the JSE. Photo: IHSAAN HAFFEJEE

The march was led and organised by the Greater Local Mining Communities Business Forum and made its way through the streets of Sandton accompanied by a police escort. The crowd marched peacefully while singing songs and holding up placards condemning mining companies.

Protesting community members from the platinum belt seen marching through the streets of Sandton en route to the JSE. Photo: IHSAAN HAFFEJEE

Having reached the stock exchange the crowd, estimated to be around 700, was addressed by leaders of the Greater Local Mining Communities Business Forum, who made it clear that they supported radical economic transformation and the new Mining Charter released by Minister of Mineral Resources Mosebenzi Zwane.

“It’s our time to eat and benefit from these mines,” said Godfrey Masuge, which prompted loud cheers from the crowd. Masuge, the president of the Greater Local Mining Communities Business Forum, said the current situation involving the affected communities and the mines was not sustainable.

“The truth of the matter is that South Africa is rich but it’s people are poor. Honestly, if our demands are not met within a reasonable time we are going to respond in a radical way by closing shafts and stopping production. We are also going to chase outside contractors working inside our communities away,” said Masuge when questioned on how communities would respond if the current situation does not change.

Photo: Zeona Jacobs, the Director of Marketing and Corporate Affairs for the JSE (centre), accepts and signs the memorandum from protest leaders. Photo: IHSAAN HAFFEJEE

A memorandum of demands was handed over to Zeona Jacobs, the Director of Marketing and Corporate Affairs for the JSE.

“It’s not the place of the JSE to respond to these demands but what I think is important is for the community, which has come from so far, to meet with the Chamber of Mines and for those two parties to find each other,” Jacobs said.

“We know from our discussions that there have been retrenchments in these communities. I believe from a job creation point of view there is a lot for all of us to do. This is imperative for the country, not just for these communities.”

“Our struggle does not end here. We are planning protests at the Union Buildings as well as the Constitutional Court. There must be a way between government and the mining houses to see how best black people can benefit from the mines. I can’t be born and live on land which is rich in minerals but be poor forever,” said Masuge.

The march came as AngloGold Ashanti, the world’s third largest gold miner, said on Wednesday it was considering 8,500 job cuts as part of a turnaround strategy to curb losses.

“This restructuring contemplates some 8,500 roles across AngloGold Ashanti’s South African business,” the Johannesburg-based company said in a statement. DM

Main photo: Protesting community members from the platinum belt carry placards as they march through the streets of Sandton on their way to the JSE. Photo: IHSAAN HAFFEJEE