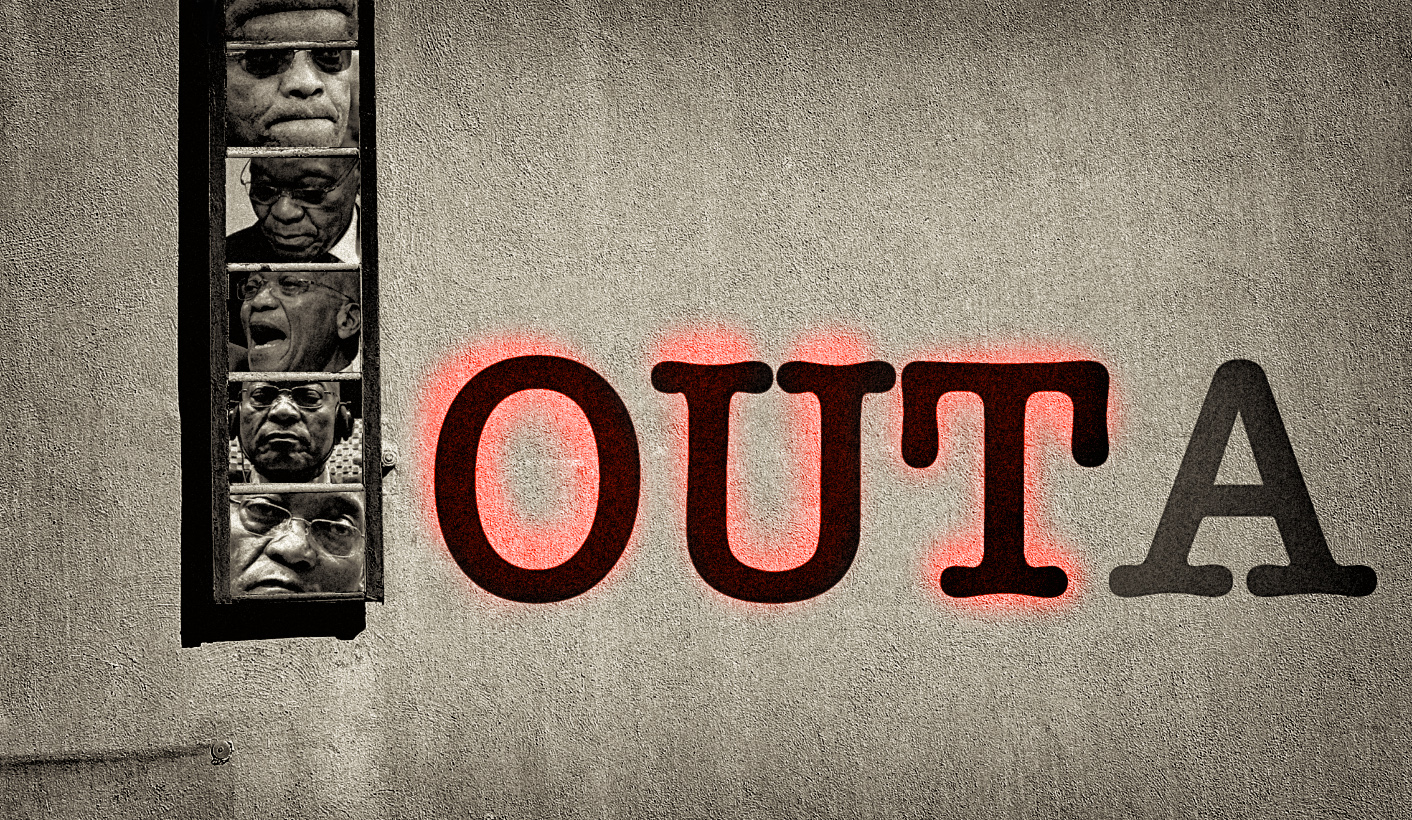 No more Mr Nice Guy was the message delivered by Outa to President Jacob Zuma in Cape Town on Wednesday. The Organisation Undoing Tax Abuse says it has compiled a mammoth dossier detailing several months of investigation into state capture, which it will present to Parliament, African National Congress’s NEC, the Hawks, the Minister of Police, the National Prosecuting Authority and the Public Protector, in an attempt to unseat Zuma. The question is, however, whether any accusations will stick to President Teflon. And whether his supporters will read it. By MARELISE VAN DER MERWE.

“If I am not told what I have done wrong, I cannot correct my mistakes,” a plaintive President Jacob Zuma recently pointed out.

If Outa has its way, he will live to rue those words.

The civil society group on Wednesday unveiled a seven-chapter door-stopper entitled No room to hide: A president caught in the act, which Outa head Wayne Duvenage wryly said could have gone on for another 20 chapters, “but you have to stop somewhere”.

The 175-page case docket describes in painstaking and excruciating detail, with a wad of six annexures for emphasis, its assessment of the extent of state capture. (You can download the case document here) This is based on its investigation of a number of sources, including publicly accessible material like Public Protector reports and media reports. It also references the #GuptaLeaks, although the bulk of the work was done before news of these broke.

“Normally in democratic societies where good governance prevails and those in authority are expected to act in the interests of the people, it takes just one of the incidents or events presented in this document to be sufficient cause to remove a sitting president from power.

“For some unexplained reason, the removal of President Zuma requires far more compelling evidence to convince those in authority to act in the interests of the country,” said Outa COO Ben Theron, speaking at the Fire & Ice Protea Hotel in Cape Town.

Giving context, Theron cited estimated losses to corruption that were as high as 20% of the procurement budget and a further report of some R60-billion lost annually, which could provide 200,000 RDP houses, 3,000 schools, or 1,250 clinics.

The evidence in the report, he says, is “unanswerable”.

Outa has opted to present the report to Parliament first. According to Theron, this was partly in the hope that the contents be tabled for discussion by the National Assembly, informing the vote of no confidence; and partly because the judiciary should only be involved when all other avenues are exhausted.

Outa has not ruled out legal action, however. Duvenage and Theron hinted they would consider litigation against Zuma as a next step, as well as those who protected him.

Was this a threat to MPs who did not vote against Zuma? Duvenage was quick to say no. But if there were no secret ballot, a disadvantage may be that MPs would be expected to explain their vote, he argued. “It’s an interesting debate,” he said.

Duvenage told media the document had been compiled with the assistance of a number of legal minds and laid out in such a way as to be easily interpreted in a judicial setting.

“As the case document has also been prepared and compiled in a manner that makes it suitable for presentation in a court of law, OUTA will contemplate turning to the Constitutional Court when convinced that it would be meaningful to do so,” the report adds.

Both Duvenage and Theron stressed that they were presenting information that was largely in the public domain, but linking it in a way that provided incontrovertible evidence of state capture.

No, says Outa. They say they are “connecting the dots”.

The document, it must be said, is no bedtime story. It builds on two other recent reports, namely the South African Council of Churches Unburdening Panel document and the Public Affairs Research Institute’s Betrayal of the Promise – How South Africa is being captured.

In short, Outa references multiple reports of the president being influenced in his appointment of Cabinet members. It cites documentation evidencing appointment and/ or retention of poorly qualified or incompetent individuals in decision-making positions. It lists instances where corrupt individuals benefited from state coffers or where no action was taken when such conduct came to light, and notes examples where the president mismanaged the Cabinet in such a way that it had a detrimental effect on the country and/ or economy.

It further argues that Zuma wilfully misled the country and Parliament and abused his position to enrich himself, his family and his cronies. Last, going back a little further, it argues that Zuma used or manipulated state resources to avoid prosecution for 783 charges.

That’s the nutshell. The gist will be familiar to South Africans, although the sum of the most recent parts may have not been packaged together in such an unfortunate narrative. There are some new details here and there, such as the extent to which an unqualified Duduzile Zuma (Duduzane’s sister) enjoyed a leg up via the Gupta family, or a little more digging into wife #4, Gloria Bongi Ngema-Zuma’s links to the Guptas. Mosebenzi Zwane and Faith Muthambi are considered worthy of enough investigation to each get their own chapter.

The seven chapters run more or less as follows: 1) interference with the criminal justice system; 2) links to the Gupta family; 3) abusing state resources via SOEs; 4) the appointment of Mosebenzi Zwane 5) Faith Muthambi 6) The finance minister debacle (drily entitled “four ministers and a wedding”) and finally, conclusions.

Extensive examples are given in each chapter. The language used is, without a doubt, often emotive and interpretive. But there is no denying the document draws on a depth and variety of resources that make for a damning whole.

Will it pack a punch?

Yes and no. Outa has vowed to mobilise further ahead of the vote of no confidence and arrange protest marches across the country. Duvenage also appeared confident that the report would provide ample evidence to MPs.

“We believe all MPs will be sufficiently empowered with substantive information about President Zuma’s conduct, to help them decide how to vote during the forthcoming vote of no confidence, whether by secret ballot or not,” he said.

“Removing President Zuma from power is the primary step that needs to be taken before South Africa can start the journey of redressing the devastating effect that his conduct and the situation of state capture has had in our country.”

The problem lies in that Outa may be preaching to the choir, at least where MPs are concerned. Their reach may be greater through media exposure of their findings, since a loyal Zuma supporter may not be motivated to read the entire document, damning or no.

Die-hard Zuma supporters took to Twitter to voice their displeasure with the Outa report. “You saw Outa today?” one wrote. “What a bunch of clowns. They have nothing to do.”

Another added, “So anti Zuma NGOs & churches compile reports about the president with ZERO findings but it’s all good because it’s Msholozi? Ok.”

A third wrote, “I’ve have [sic] connected the dots Outa, you’re one of the corrupt NGOs.”

Nonetheless, constitutional law expert Professor Pierre de Vos believes Outa has chosen a solid strategy in heading to Parliament first. Echoing Theron’s sentiments, he told Daily Maverick: “The Constitutional Court ‘secret ballot’ judgment makes clear that members of Parliament have a constitutional duty to hold the executive accountable. The Parliament is the democratic representative of the people of South Africa and represent the interests of citizens.

“Courts themselves are not best placed to fulfil this function, so it is wise to approach Parliament, as well as law enforcement agencies like the Hawks, if there is any evidence than any member of the executive has done anything wrong.” Further, he says, it could provide a much-needed boost of faith in South Africa’s democracy. “It could be read as a vote of confidence in the democratic process, which is a good thing,” he added.

Dr Co-Pierre Georg, Senior lecturer at the African Institute of Financial Markets and Risk Management and Deputy Director of the African Collaboration for Quantitative Finance and Risk Research, was not optimistic. “The problem is that Outa does not provide any new evidence against Zuma,” he said. “Not that any new evidence would be needed under normal circumstances, but these are not normal circumstances.

“Following the Betrayal of the Promise report and the GuptaLeaks, the Outa report does not add much novelty. So my feeling is that it will not be a game changer.” In Georg’s opinion, the outcome of the vote rests on whether the Speaker can be convinced a secret ballot will not unseat Zuma.

That said, he added, the recession was contributing to a “toxic atmosphere” and it was “way too easy” to blame Zuma for this. “If ‘team Zuma’ feels they all may be ousted come December, when the effects will be felt even more than now, that may be enough to shift the balance of power,” he said.

Earlier in the week, Outa announced it was intending to take action against UK-based PR firm Bell Pottinger. DM