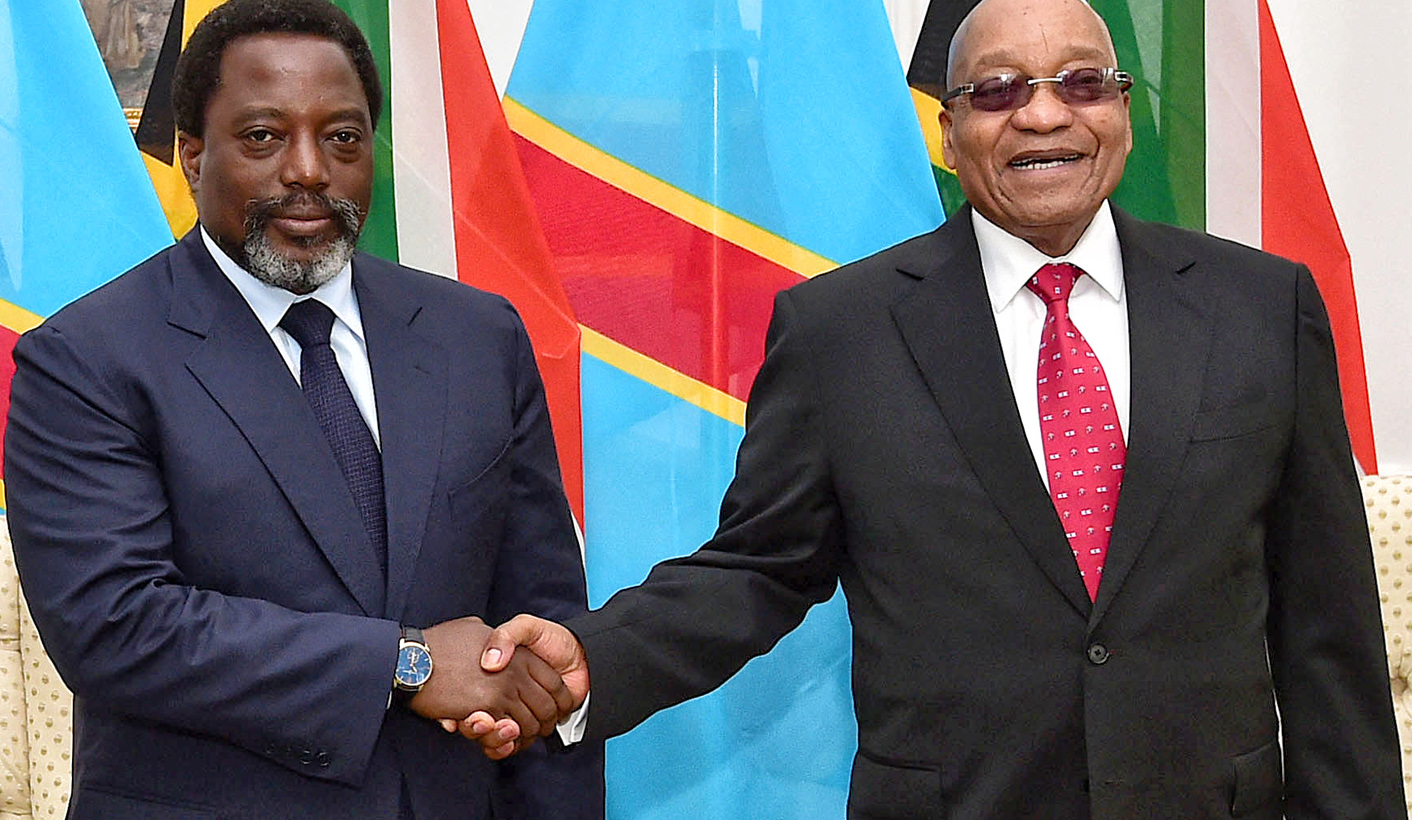 DRC President Joseph Kabila must have left South Africa a happy man this weekend, having effectively won President Jacob Zuma’s approval to remain in office for what will probably be at least another year. By PETER FABRICIUS.

Kabila was supposed to have stood down last December at the end of his constitutionally-limited two terms in office. But he did not do so claiming elections for a successor could not be held as the voters roll was out of date.

This provoked violent political protests, prompting the Catholic Church to broker the “St Sylvestre” deal between the government and opposition at the end of the year to hold elections and conclude Kabila’s tenure sometime this year.

But that deadline has now also clearly receded into the indefinite future, sparking fears of new violence. However at Sunday’s meeting of the SA-DRC Binational Commission, Zuma accepted Kabila’s explanation that technically, elections could not be held this year, officials from both sides said.

In his opening remarks Zuma congratulated Kabila for the progress he had made so far in implementing the St Sylvestre agreement, adding that “the DRC is now politically stable and the security situation has improved” and offered SA’s continued solidarity and support.”

Kabila’s chief adviser Barnabé Kikaya-bin-Karubi said Zuma’s advice to Kabila in the closed meeting was  “to hold elections as soon as possible so as to conclude the matter peacefully.”

At the same time he said Zuma had accepted Kabila’s explanation that the logistics would not permit elections this year. He noted that the DRC electoral commission had estimated elections could be held at the soonest next April but even that was not certain. South African officials believe it will be even later.

Bin-Karubi said so far the electoral commission had registered 29 million of the 45 million estimated voters. “By the end of July, hopefully, if we manage to stabilise the situation in the Kasais, we will be done with the registration of voters,” he added, referring to the recent explosion of violence in the Kasai West and Kasai East provinces after government security forces killed a local chief opposed to Kabila.

However, even if the voter registration finished at the end of July, elections would still not be possible this year, he added.

Cleaning the voters roll might take a month. Then Parliament would have to enact an electoral law to distribute the seats in Parliament according to the new roll.

He said Zuma’s advice to Kabila had been to hold elections as soon as possible so as to conclude the matter peacefully.

But he added that “the South Africans are happy with the explanation we gave which was more technical than political.”

A South African official said: “We were not necessarily satisfied but also I can’t say we were not satisfied. It does seem that logistically it might not be possible to hold elections this year for two main reasons.” The first was that DRC had decided to do a general voter registration and not just a registration of young new voters as originally intended. Also the violence in Kasai would make it dangerous to register voters there, especially as the security forces had been blamed for much of the killing.

The other main reason for the delay was that the DRC said it needed US$1,6 billion to fund the elections – and it insisted on financing this itself, out of a total national budget of just US$4 billion. Bin-Karubi said the DRC government would have to cut spending in other areas like agriculture to find the money.

Kabila had another reason to be grateful to South Africa as it led the change to water down a probe by the UN Human Rights Council into the Kasai violence. The official confirmed that South Africa had insisted that the UN as well as the African Union should merely provide technical assistance to the DRC’s own internal investigation which was already under way.

The joint communique from the BNC said both presidents had “expressed their satisfaction” with the successful conclusion of the political dialogue initiated by Kabila and which had led to the appointment of a Prime Minister, the establishment of a Government of National Unity and the strengthening of democracy, which would pave the way for the holding of elections in the DRC.

Zuma had also expressed his satisfaction with Kabila’s progress in identifying a contractor to build the Grand Inga hydroelectric power plant on the Congo River which is supposed eventually to produce 40 000MW of electricity. On 29 October 2013 SA and DRC signed an agreement that SA would buy 2 500MW of electricity from the first phase of the project, though thousands of kilometres of power lines would first have to be built to get it to South Africa.

About ten members of the Congolese diaspora mounted a small protest at the gates to the Bryntirion government residential complex in Pretoria where the BNC was taking place. They objected to Zuma hosting Kabila whom they said was an illegitimate leader. DM