Op-Ed: A veneer of legality to disguise total system failure of traditional councils 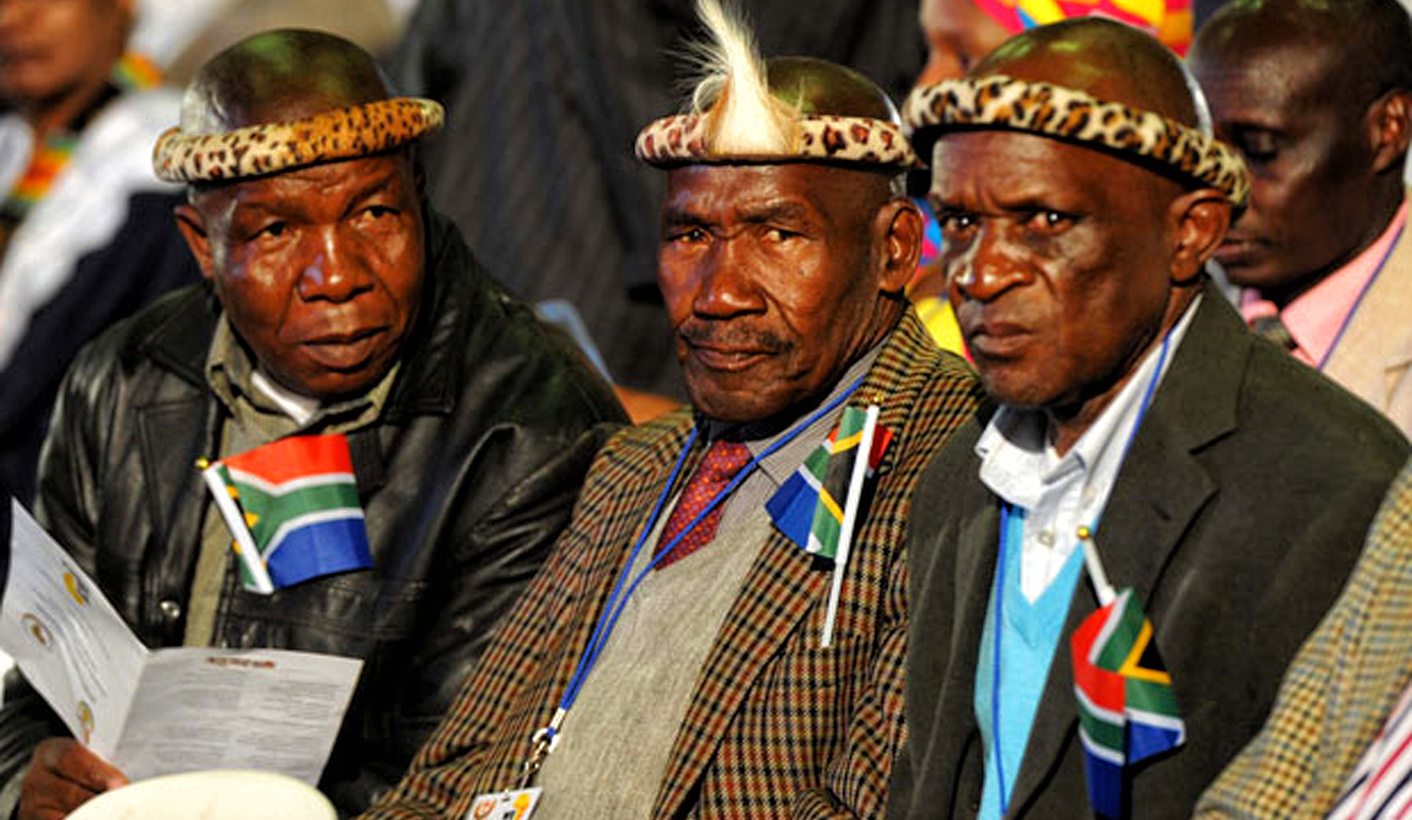 Photo: Traditional Leaders in attendance of the Africa Day celebration held at University of Pretoria

Rural democracy is under siege and the law is being used as a tool to attack and further marginalise the most vulnerable of South African citizens. The latest strike is the Traditional Leadership and Governance Framework Amendment Bill, which was introduced in the National Assembly by the Department of Traditional Affairs in March. By AYESHA MOTALA and THIYANE DUDA.

The Bill seeks to amend Section 28 of the Traditional Leadership and Governance Framework Act of 2003, to extend the timeframes within which traditional structures are to transform. Its other purpose, according to the department, is to align the term of office of the National House of Traditional Leaders, which expires in August, with that of reconstituted traditional councils.

The Portfolio Committee on Cooperative Governance and Traditional Affairs would have us believe that the Bill is a step forward to advance rural democracy and preserve custom and institutions of traditional leadership. However, many concerns and questions about the Bill were raised in a meeting convened by the committee in Parliament on 13 June for stakeholders to make oral submissions.

This Bill is not just a “technical” or a “stopgap” measure – it has far-reaching consequences for the lives of rural citizens, especially with regard to deal-making and accountability in communal areas. The Bill proposes no solutions to the endemic and structural reasons and entrenched power relations that are behind the failure of traditional councils to meet the modest and inadequate transformation criteria set by the Framework Act.

The Bill seeks to extend the transformation timeframe for tribal authorities that were created in terms of the Bantu Authorities Act, a bedrock apartheid law. The 2003 Framework Act gave the tribal authorities of old one year in which to transform by ensuring that at least a third of members of a traditional council must be women, and 40% must be democratically elected. Only authorities that met these composition requirements were deemed legally valid.

However, attempts to transform these structures over the past thirteen years since the enactment of the Framework Act have failed and there have been no tangible consequences for such failure. Instead, further extensions of timeframes for transformation have been granted. Flawed election processes in the Eastern Cape, North West and KwaZulu-Natal have been documented.  In Limpopo, no traditional council elections have yet taken place. This failure is explicitly acknowledged in the explanatory memorandum to the Bill.

When asked about the number of untransformed and thereby legally invalid traditional councils, the department could not coherently spell out the scale of the problem. Even when Kevin Mileham, a member of the committee, asked how many tribal authorities have failed to transform, how many have collapsed after transformation and if members of the untransformed tribal authorities receive salaries, the department failed to answer in an open and transparent manner.

The Department has justified the Bill as a technical and operational measure needed to fill a lacuna in the law. In the meeting, the Department attempted to gloss over the crucial fact that the Bill removes the direct consequence of illegality for tribal authorities and councils that fail to meet the composition requirements. The Bill proposes a new one-year deadline for transformation and gives the Minister the discretionary power to take necessary steps to ensure that tribal authorities and traditional councils are reconstituted if the one year timeframe is not met. Alarmingly, no indication is given as to what these necessary steps entail, nor is it clear what happens if the Minister fails.

In its memorandum to the Bill, COGTA acknowledges that the legal status of tribal authorities and traditional councils that have failed to transform timeously and adequately are precarious, as are any agreements they sign. This means that many tribal authorities, and improperly reconstituted councils, are currently operating outside the law.

In Limpopo, untransformed tribal authorities continue to charge “tribal levies” and when people fail to pay they are denied the proof of residence stamp required to obtain a South African identity document or open a bank account. In some areas people are also not allowed to bury their deceased if they don’t pay “tribal levies”. This issue is currently before the High Court in Limpopo.

In mine-hosting communities, tribal authorities continue to enter into deals with mining companies, claiming to represent traditional communities without consulting those communities. These deals should actually be signed by the Minister of Rural Development and Land Reform as the nominal owner of communal land.

For example, the Mapela community in Limpopo was not consulted on a R175 million settlement agreement with Anglo-Platinum that was signed in secret by their traditional leader, Chief David Langa. He had been authorised to negotiate the deal only by the traditional council and not by the people.

The Traditional and Khoi-San Leadership Bill that is simultaneously before the committee seeks to affirm and legalise this practice by giving traditional councils the power to enter into contracts without being obliged to consult with or obtain the consent of people whose land rights will be directly affected. Deputy Minister of Traditional Affairs Obed Bapela moreover told the committee on 21 June that, in terms of one of the resolutions proposed at the recent Indigenous and Traditional Leadership Indaba, 13% of South African land should be transferred to traditional authorities, with traditional community residents having only “security of tenure” on the land.  These are considerable powers for untransformed structures.

Yet, traditional authorities have failed to meet basic financial accountability standards in the course of their operations. Financial statements of traditional authorities in the North West have not been audited since 1994. Earlier this year, the Maluleke Commission, which is investigating the Bakgatla ba Kgafela chieftaincy and finances, ordered Chief Nyalala Pilane to hand over financial statements to the Commission, but he and the traditional council delayed for months. More recently the Public Protector requested that Premier Supra Mahumapelo initiate the investigation of mining royalties missing from the development account of the Bapo Ba Mogale and maladministration of all tribal accounts in South Africa. The auditor-general was asked to urgently audit the Bapo account.

Another concern highlighted is that the Framework Act preserves the tribal jurisdictions created by the 1951 Bantu Authorities Act. This has the effect of locking people into specific tribal identities by virtue of geographic residence, which is contrary to the consensual and affiliation-based nature of customary law. This means traditional councils derive their status and jurisdiction from statute and discredited apartheid boundaries, instead of from the people. The Bill does not take the opportunity to deal with this concern and when it was raised before the committee, the department dismissed it with the claim that people are free to live wherever they want to.

The department’s response is perplexing considering the fact that poor people do not have the means to simply pack up and leave behind their land, access to marine resources, family graves and social-networks. Yet they could, and should, have the legal option to reject the authority of a traditional leader appointed during apartheid.

What the committee refuses to acknowledge is that, by amending section 28 of the Framework Act, Parliament’s own assurances that the Framework Act would transform the institution of traditional leadership in 2003 are undermined and the essence of rural democracy is compromised. Traditional Councils that failed or refused to meet the composition requirements are given a new lease of life, despite not being transformed. The Bill attempts to clothe traditional councils with a veneer of legality, but their operations remain manifestly unlawful. DM

Motala and Duda are researchers with the Land and Accountability Research Centre in the Department of Public Law at UCT.