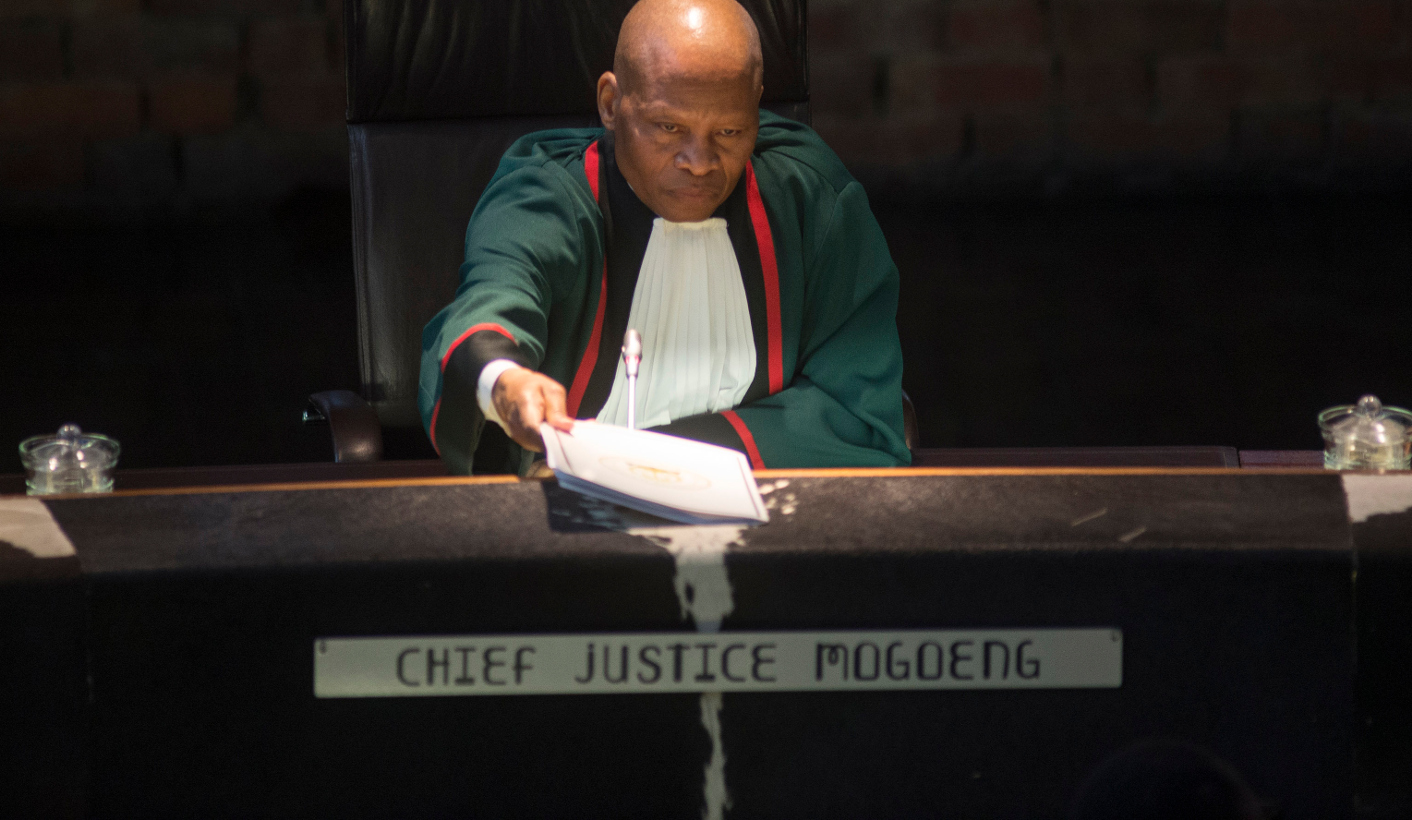 Opposition parties celebrated on Thursday after Chief Justice Mogoeng Mogoeng ruled that Speaker of Parliament, Baleka Mbete could conduct a no confidence motion vote in President Jacob Zuma through secret ballot. The court noted conditions the Speaker must consider in making her decision, but for now it’s still up to the ANC leader. By GREG NICOLSON.

Reading a unanimous judgment, Justice Mogoeng set aside Mbete’s decision that she had no power to hold a vote by secret ballot and said the no confidence motion in Zuma must be rescheduled. The Constitution gives the Speaker the discretion on whether to hold a secret or open vote, Justice Mogoeng said, but Mbete must take into account specific factors to advance the National Assembly’s role as ensuring executive accountability and representing the best interests of South Africans.

“The Speaker’s decision was invalid and must be set aside,” said the Chief Justice. Mbete must decide on  the voting procedure according to the specific situation. Justice Mogoeng said the decision on whether votes are held by secret or open ballot must be rational, enhance accountability to allow Members of Parliament to vote according to their constitutional commitments rather than just a party line. The Speaker, he said, must ensure the vote “is not a fear or money inspired sham”. Her power “must not be exercised arbitrarily or whimsically” and cannot be used to benefit her position or a political party.

The Constitutional Court was careful not to encroach on the separation of powers doctrine and tell the Speaker what to do. In court, Mbete’s lawyer, however, had said she was not in principle opposed to a secret ballot.

Once again the court found it necessary to explain, at length, Parliament’s role representing the interests of citizens and holding the executive accountable.

Justice Mogoeng began his judgment by outlining the responsibilities and accountability mechanisms imposed on elected representatives. He said the land and its wealth belong to the people, united in their diversity, and officials must be held to the values of accountability, openness and responsiveness.

When checks and balances fail, citizens can demand ultimate accountability – impeachment or a no confidence motion. He repeated that MPs are elected to represent the people and hold the executive to account and must follow their oath of office.

The Chief Justice called a motion of no confidence “a threat of the ultimate sanction the National Assembly can impose on the President or Cabinet” and “one of the most effective accountability of consequence enforcement tools”. He said the mechanism is about ensuring the democracy is well managed and ensures that the needs of the people cannot be neglected without harsh consequences.

Photo: Bantu Holomisa, the President of the United Democratic Movement, celebrates with members of opposition parties after Chief Justice Mogoeng Mogoeng handed down the judgment in the matter concerning a secret ballot in a motion of no confidence in President Jacob Zuma. Photo: Ihsaan Haffejee

Opposition parties welcomed the judgment. They will now have to write to Mbete to have the motion of no confidence debate rescheduled and will plan demonstrations across the country on the day Parliament decides Zuma’s fate. They committed to fighting against the President and ANC until the 2019 elections.

United Democratic Movement (UDM) leader Bantu Holomisa said: “The UDM feels vindicated because we asked the Speaker to use her prerogative but she chose the interests of her political party.” He said reported threats against ANC MPs suspected of potentially voting against Zuma now “fall flat”.

Congress of the People (Cope) leader Mosiuoa Lekota called the judgment  “a triumph of democracy”.

Photo: Mosiuoa Lekota President of the Congress of the People addresses the media outside the Constitutional Court after the judgment in the matter of the secret ballot in Parliament. Photo: Ihsaan Haffejee

While Mbete still has discretion in her decision, James Selfe from the Democratic Alliance (DA) said opposition parties will ensure she acts rationally and in line with the court judgment and the Constitution.

Holomisa claimed ANC MPs are now obliged to vote according to their consciences and uphold the moral duty they take on as elected representatives.

DA leader Mmusi Maimane said the party has already written to Mbete asking her to reschedule the vote and called on ANC MPs “to do what they know is right and vote Jacob Zuma out”.

The African National Congress (ANC) caucus in Parliament welcomed the ruling. “Notwithstanding these matters and the effects of the engagements that will ensue in the rules committee, we are still steadfast that whether such engagement will result in a vote by secret ballot or not, we have unqualified and unequivocal confidence in the ANC caucus not to vote in support of a motion to remove the president of the ANC who is also the president of the Republic of South Africa and our government from office,” said a statement from the ANC chief whip’s office.

The court application was brought by the UDM and a number of opposition parties. In May, the UDM argued a secret ballot would not breach the separation of powers doctrine. Considering that when multiple candidates are nominated for president the National Assembly holds a secret ballot, the only way to hold the president to account was to conduct a secret ballot during motions of no confidence, the party argued.

The point was heavily debated: Why did the Constitution allow for a secret ballot in one instance and not another? Justice Mogoeng on Thursday said it was clear that by leaving the option open, the Speaker could use secret ballots.

The EFF said MPs primary duty is to the electorate and Constitution, not political parties, and to oversee executive actions they need to be able to vote with their consciences without repercussions. The Inkatha Freedom Party (IFP) also argued for a secret ballot.

Lawyers for President Jacob Zuma and Mbete both made concessions during the hearing, which clearly counted against them in the judgment. Zuma and Mbete’s lawyers both claimed the Constitution didn’t provide for a secret ballot in no confidence motions, but later made concessions that effectively showed the law allowed for such votes and held no negative consequences.

The ANC has maintained that whether or not a secret ballot is granted, its MPs are required to vote according to the party line and failure to do so would violate the ANC constitution, which forbids colluding with other parties to the ANC’s detriment.

Advocate James Grant said the judgment was in line with what legal experts were expecting. “It was pretty clear the speaker had her law wrong.” He said the matter would likely end up back in court, regardless of what Mbete decides. “I would foresee a review coming either way.” If she agrees to a secret ballot, Zuma might take the decision on review. If she doesn’t, opposition parties might return to court.

Holomisa believes enough ANC MPS might vote to remove Zuma even with an open vote. All opposition parties have committed to voting for the no confidence motion, except the one MP from the Pan-African Congress (PAC), who is expected to abstain. MPs tied to the SA Communist Party (SACP) are likely to go against the President. At the ANC’s recent national executive committee 18 members spoke in favour of removing Zuma. A successful no confidence motion will need support from at least 50 ANC MPs to cross the 50% plus one threshold. DM

Photo: Constitutional Court Chief Justice Mogoeng Mogoeng hands down judgment in the matter concerning a secret ballot in a motion of no confidence. Photo: Ihsaan Haffejee