State  Capture: Letters provide the smoking gun but is it enough to topple Zuma? 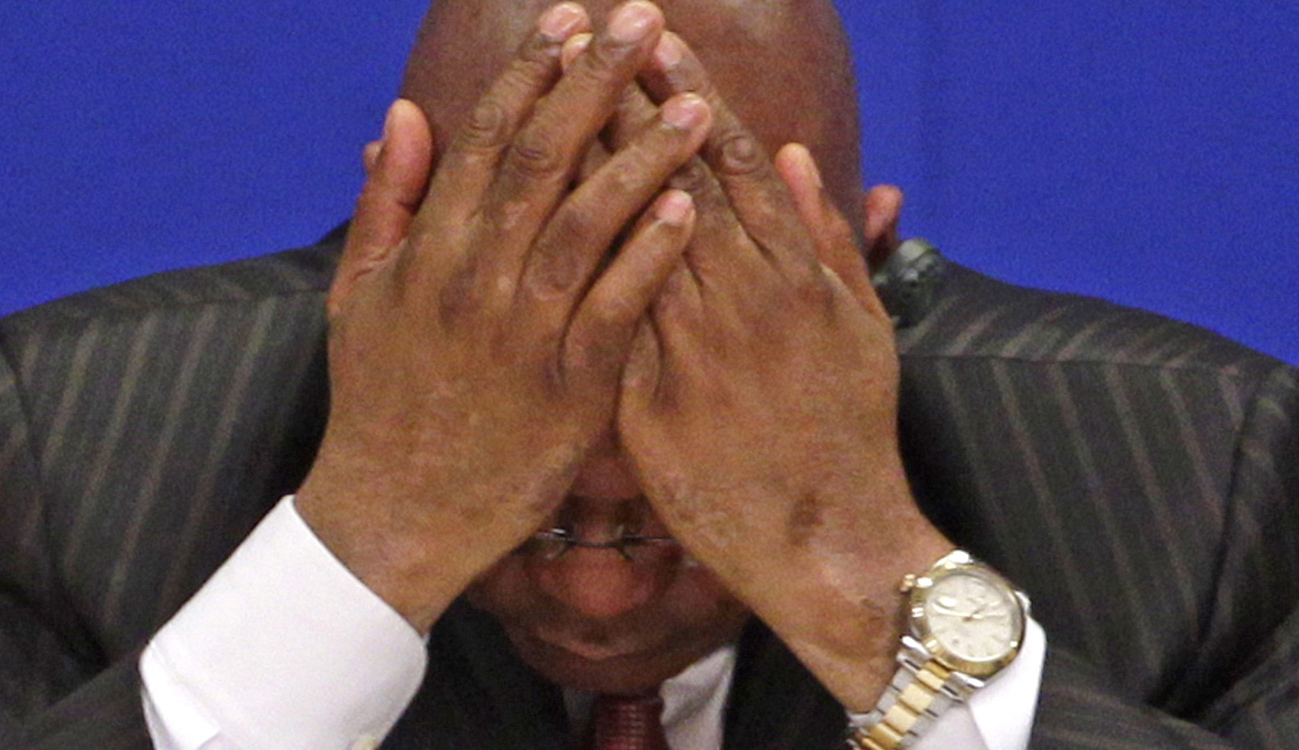 On Sunday morning both the Sunday Times and the City Press published excerpts of emails between members of the Gupta family and their employees. The contents are explosive. They detail how President Jacob Zuma appeared to be planning to make the United Arab Emirates “his second home”. The emails, seen by the two Sunday papers, show how much control the Guptas had in certain departments and state-owned enterprises. There are also details about how many people received hotel stays and plane trips and chauffeur driven cars. But in some ways the most important thing about these emails is the timing of their release. And how they prove that Zuma, and his defenders, have simply been lying. By STEPHEN GROOTES.

One of the most impressive things about the two stories published on Sunday is the level of detail. For years we’ve known that the Guptas have been playing a political game far bigger than their claimed “friendship” with President Jacob Zuma. The behaviour of Mineral Resources Minister Mosebenzi Zwane, Brian Molefe and Finance Minister Malusi Gigaba in ways that benefited the Guptas has indicated that there was state capture at work here. Until now, the one eyewitness account of this has been the allegations made under oath by former Deputy Finance Minister Mcebisi Jonas. What these emails now show is exactly how so much of this was done.

Perhaps the most explosive detail is a draft letter sent from Tony Gupta to one of his employees, and then to Duduzane Zuma which was prepared for President  Zuma. In the letter Zuma writes to the Crown Prince of Abu Dhabi, General Sheikh Mohammed Bin Zayed Al Nahyan, and requests his “guidance and direction” for making the UAE his second home. The papers quote from the letter that: “It is with this sentiment that I am happy to inform you that my family has decided to make the UAE a second home. It will be a great honour for me and my family to gain your patronage during our proposed residency in the UAE.”

Even by the standards of our slightly strange democracy, this is huge. It is unthinkable that a sitting head of state, or even members of his family, would be looking for any kind of residency elsewhere. To be clear, while people like President Robert Mugabe or Nigeria’s Muhammadu Buhari may spend much of their time outside of their own countries, that is always cloaked in the excuse of “medical treatment”. The only reason one can think of for Zuma to be writing in this way is because he is afraid of what could happen here – that even he may not be able to escape the law.

That said, there is something odd about this as well. While Zuma has spent much of life outside the country, because of his role in the Struggle, it seems hard to believe that he would even consider going that far away from Nkandla. He has always appeared happiest, as so many people are, when he is at the place where he grew up.

Then there is the strange case of the Julius Malema tweet. Last year he said that “We received unconfirmed reports that Zuma wants to leave the country and seek asylum in Dubai because he doesn’t feel safe in his country!” It seemed slightly ludicrous at the time. It is always difficult to trust someone like Malema as it serves his purpose to create a narrative is hostile to Zuma. In this case, though, it would appear he was on to something. It would also mean we have to pay more attention to Malema’s other claim around the same time when he said Zuma was personally involved in moving R6bn to Dubai to help the Guptas.

The Presidency has completely denied that he is seeking residency in Dubai, but the level of detail contained in the leaked emails make it hard not to believe after all it is a quote, a detailed quote, from a letter. A detailed quote like that is always harder to deny, because it proves the letter exists.

The other details in the stories, under normal circumstances, would be considered world class exclusives.

Des van Rooyen, he was who was once Finance Minister, was flown to Dubai by the Guptas, after claiming he paid for it himself (and confirming that he had gone there for just one day, for a “holiday”).

Then there is the  detail that former Oakbay CEO Nazeem Howa helped ANC Youth League leader Collen Maine deal with media inquiries, and that other staff members helped Zwane prepare for press conferences.

On what planet do business people help politicians prepare for press conferences? It has become increasingly clear that the Guptas and these politicians were working on the same project, that there is no line between the politics and the business. And that the project was the capture of the state.

These reports raise many other questions including those around the timing of the release of the emails, and their possible impact.

The fact they were published literally in the middle of the ANC’s National Executive Committee meeting which was already discussing a motion of no confidence in Zuma shows a huge level of orchestration. This was planned. And the plan involved publishing these emails in not one, but two newspapers. The Sunday Times is still the biggest and most influential media outlet in the country after the SABC. The City Press has a strong reputation among those who follow politics closely. If you are going to do something, these are the outlets to use.

That said, the journalists here have done a lot more than just publish information they were given. They’ve done an excellent job with it. If someone offers you information like this, you have a journalistic duty to take it. What is particularly impressive about the Sunday Times report is that they did not just publish the information, they gave it a proper treatment, it is properly contextualised, the point is not just the information in itself, but how it proves that Zuma, and the Guptas have been capturing the state. In other words, they have done the proper journalistic function of interrogating the information, and explaining how it fits with what we already knew.

All of this shows, again, the level of orchestration and planning by the anti-Zuma forces in the ANC. It has long been suspected by some at this URL that all of what we are seeing now against Zuma in the alliance has been long-planned, that the role of the SACP in first questioning what was happening at the SABC nearly a year ago was part of a long-running maneuver. This would appear to bolster that case. Can you imagine being one of Zuma’s supporters in the NEC, and now having to contend with this. What would you say in Zuma’s defense? How would you counter it? How do you argue against this level of  detail. It would require a line-by-line defense, going through each claim and attempting to show that it is not true.

The leak comes just 10 days after the SA Council of Churches published its report on state capture. Last week a group of academics published their own document. By Sunday morning, everyone who follows these things knew what state capture was, and how it was done. These emails cements that perception.

So if it is true, that there is an orchestration here, is it enough to remove Zuma? Certainly those on the NEC who simply are not sure whether he is a lame duck or not, must now have more doubts. One cannot expect political objectivity from a politician. In this case this means is that those who’s self-interest is tied to Zuma’s might now realise that his time is up. At the very least, it puts immense pressure on an already strained meeting.

At the same time, Zuma is likely to be under increasing pressure to remove from his Cabinet allies like Faith Muthambi and Zwane who are mentioned often in the emails. His refusal to remove them in the last reshuffle was proof that it was a factional reshuffle. If he now fails to take action against them, despite the proof of wrong-doing in these communications, it once again reveals his true agenda.

Those who reside in Saxonwold and Dubai must have been asking themselves on Sunday morning: How on earth did these emails leak?

The first concern for them would be that this is from someone inside their intimate circle, someone who works very closely with the family, who has access to their email systems, and was maybe even copied on these emails.  They may be worried that there could well be more emails to come. It is always impossible to know how something like this is leaked, but the other possibility is that they were hacked. The Guptas are not renowned for their discipline, the fact that someone like Ajay Gupta can just make incredible offers to Jonas on their first meeting shows that. Perhaps someone who has had enough of Zuma was able to get into their system.

There is one other way in which this could have been done which is even more intriguing. Perhaps someone in the intelligence services is responsible for this. And if that is the case, then it suggests that Deputy President Cyril Ramaphosa also has people in those services who are willing to help him. Which would balance things up a little, considering it is common knowledge that Zuma uses the intelligence services for his own political ends.

In a time of incredible claims, impossible stories and political revelation after political revelation, these emails stands taller than almost all the others. It is because they reveal the documentation about how it was done. About how the state was captured. The question now is whether the ANC will act. And if it doesn’t, about whether society itself will act. DM