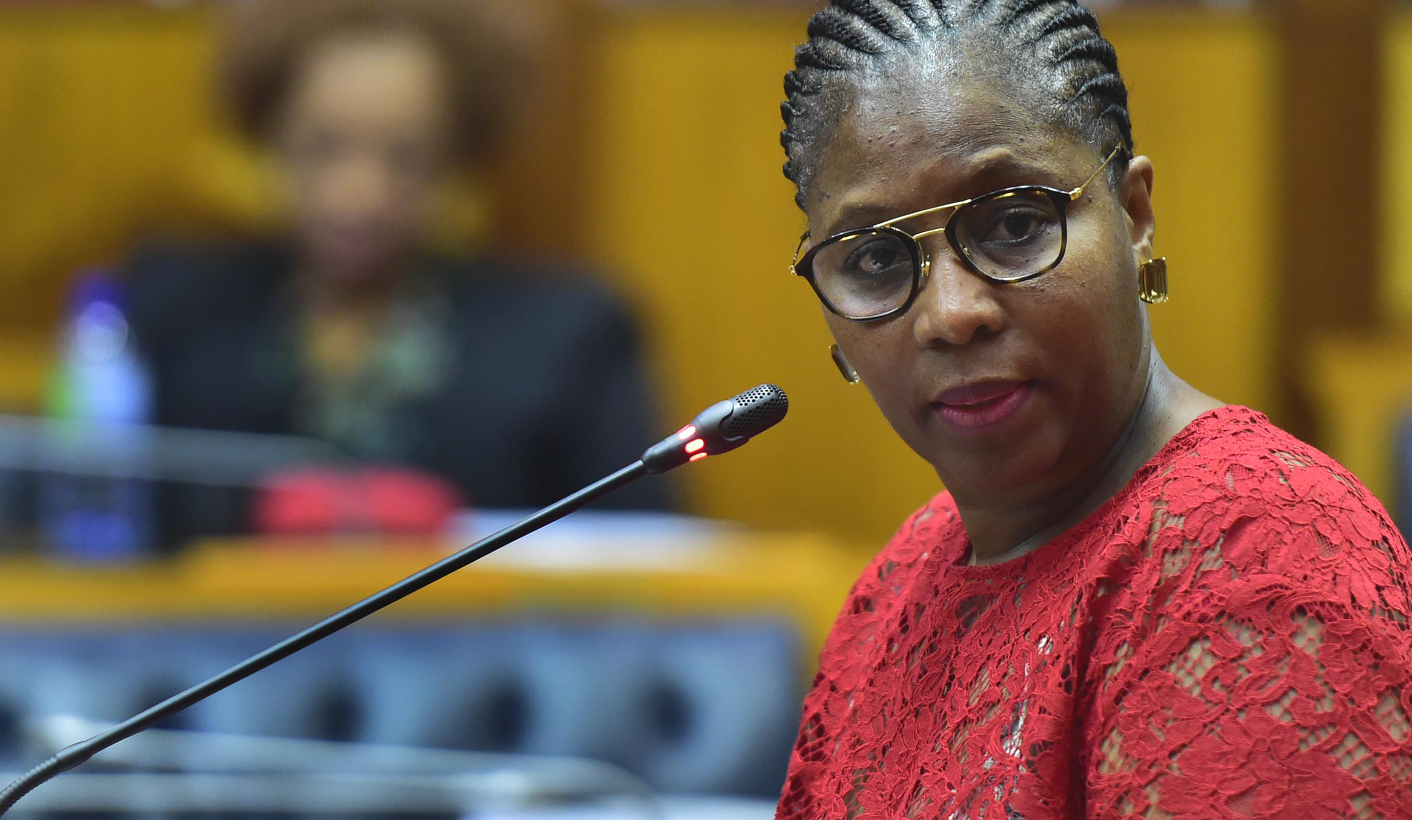 Communications Minister Ayanda Dlodlo has pledged an end to the “prohibitive” cost of data and voice communications. “The cost of data and voice communications must fall,” she said in closing her maiden budget speech on Friday, also announcing co-operation with Telecommunications and Postal Services Minister Siyabonga Cwele in this regard. With this Dlodlo became the third minister in two days to broach the prickly issue of, particularly, data costs. A day earlier Economic Development Minister Ebrahim Patel announced a Competition Commission inquiry into high data costs. By MARIANNE MERTEN.

Communications Minister Ayanda Dlodlo on Friday said moving towards reducing data costs should not be an impossibility. “It really shouldn’t take long, if all relevant entities work together,” she told Daily Maverick after her budget speech. “Many voices out there will come on board … (Data) it’s expensive, it’s slow.”

On Thursday Dlodlo’s Cabinet colleague, Economic Development Minister Ebrahim Patel, used his budget to announce a Competition Commission probe of high data costs, and work with regulators to identify measures to reduce data costs. “The growth of this data-driven economy is constrained by high data costs,” said Patel. However, earlier the same day, Telecommunications and Postal Services Minister Siyabonga Cwele cautioned it could take up to two or three years to tackle this. At his budget vote briefing, Cwele cited an initial inquiry by the regulator, Independent Communication Authority of South Africa (Icasa), that found significant increases in data usage, by 55%, and boosted income from data to service providers, up from R8-billion to R38-billion, while some 4,000 jobs were shed.

A World Bank economic update in February 2016 said South Africa had the fourth expensive data costs across 17 African countries – two companies dominated 70% of the market – and ranked towards the bottom end in international listings for data speed. Fin24 last September reported South Africa’s data prices were “on average 134% more expensive” than the cheapest prices among BRICS members Brazil, Russia, China and India, and also compared to Kenya and Australia. [Note: This writer only had to pay the equivalent of R270 for unlimited data for a month during a recent four-months stint in Finland, a country with a population of 5.5 million.]

With official statements now made, it’s the follow-through that counts. Parliament’s telecommunication and postal services committee last year held public hearings into the cost of data, but its report has yet to receive attention. It has been lingering on the National Assembly order paper below the line, parliamentary lingo for “We’ll get there when we do, no rush”.

On Thursday, Dlodlo was all about the “communication dividend”, emphasising it must benefit all South Africans. Controversies at the SABC notwithstanding, the public broadcaster got exactly 73 words – to thank staff for continuing to do their work, and for the various SABC platforms continuing to provide content.

However, Dlodlo also announced work was ongoing on the Broadcasting Amendment Bill – her predecessor Faith Muthambi, now public service and administration minister, tabled the Bill to effectively remove Parliament’s role in appointing the board – and emphasised a focus on sustainability and stability at the SABC. “We are committed to a strong, independent and relevant public broadcaster, which is accountable and performs optimally.”

The thread through Dlodlo’s budget speech was that the communication dividend included the fourth industrial revolution, or the age of digitalisation and related technology,  the community broadcasting sector which the minister described as “a channel to bring citizens and government closer”, and Government Communication and Information Systems (GCIS) disseminating information on government services, programmes and initiatives.

While affordable data costs would be welcomed, Dlodlo’s comments on GCIS as central to “narrow the gap between government and the people by ensuring access to government information and constantly communicating the work of government”, raised the spectre of a state propaganda machine, and not only among opposition parties.

“Keep South Africa informed at all times about the work of government, and do so without being the Minister of Propaganda. Let the people be the ultimate judge,” said DA MP Phumzile Van Damme. “The role of GCIS is not to disseminate propaganda, but to inform…”

EFF MP Fana Mokoena echoed this, saying no amount of propaganda and telling a good story would hide that the ANC had reached its sell-by date. “GCIS is not an effective body. It peddles propaganda,” he said. “It is never too late to close this department and re-integrate it into telecommunications. Minister Dlodlo, as effective as we hope she will be, can return to Public Services and Administration. If President Zuma wants to retain Muthambi, she can be minister without portfolio.”

Dlodlo received if not a warm, then respectful reception by the usually cantankerous opposition parties. Under her watch, less than two weeks in the portfolio, the SABC interim board, which Muthambi in one of her last acts pre-Cabinet reshuffle stopped pending State Security Agency vetting, has been able to start what the parliament inquiry recommended: clean up the financial and governance turmoil.

After years of sidestepping action against SABC top executive Hlaudi Motsoeneng, and fending off various court challenges, the SABC has instituted disciplinary hearings, including counts related to the damning 2014 public protector finding  that he should face disciplinary hearings for misrepresenting his qualifications, purging staff and awarding himself salary hikes.

And while Dlodlo remains mum on how much money the interim SABC board has requested, either as a state guarantee or in renegotiated commercial bank loans, her commitment to Parliament’s communication committee the matter is being processed with National Treasury allayed MPs concerns.

Dlodlo, the former deputy public service and administration minister, has a wealth of experience to draw from in negotiating the communication’s portfolio dominated by controversies. An uMkhonto we Sizwe soldier in various Angola camps, who was trained in Moscow and went to Britain to study maritime and shipping management, she returned to South Africa in 1994 to hold various posts – human resources, strategic information and industrial relations – at Telkom, Portnet and Sanlam, aside from her sting as MK Military Veterans Association secretary-general.

Within the communication portfolio, not only GCIS bears watching, but also Brand South Africa’s role in leading South Africa in promoting the good story. “This work is vitally important and we all have a role to play in building our nation. Now is the time for a new spirit of patriotism and optimism. Now is the time for all South Africans to play their role as conscious brand ambassadors. All too often outside investors only get to hear the negative stories about our great nation. It is up to us to highlight the many positive things about our nation and our people.”

The budget vote was presented professionally deadpan, calm-voiced and without overt politicking. It is perhaps this approach that has had not only the ANC MPs, but also opposition MPs state their support for the minister. The IFP said it would for the first time support the budget.

And IFP MP Liezl van der Merwe took up Dlodlo’s earlier promise to do what is necessary so South Africa was a country “that not only theorises about our commitment to non-sexism”, but lived up to ending violence against women.

“Government has a flagship call-centre (for abused women and children). This government call centre is invisible. Use the SABC and GCIS to make it known,” Van der Merwe urged Dlodlo. DM