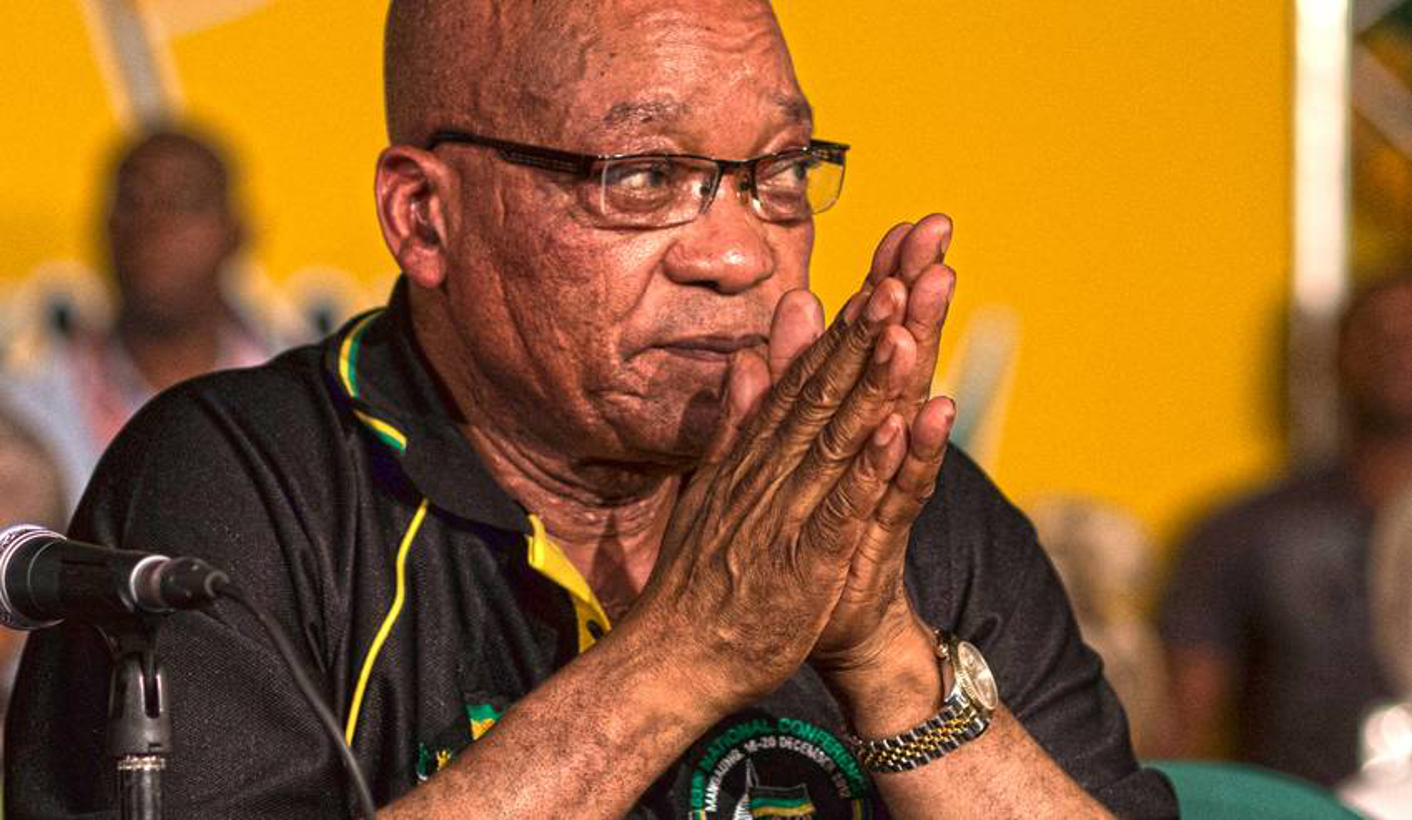 With 36 member churches and organisations representing millions of Christians, the SA Council of Churches (SACC) is arguably the biggest organised formation in the country. A pastoral letter to be issued across congregations reflecting on state capture and the report of their Unburdening Panel could have massive political consequences. The ANC had the opportunity to “unburden” itself of state capture and did not. So for the first time since the height of apartheid, the church is intervening to take on “a government that has lost its moral legitimacy”. The SACP, meanwhile, is convening “progressive forces” in the country for a national imbizo that could set the agenda for the big political conferences coming up. By RANJENI MUNUSAMY.

You know you are dealing with a completely bizarre situation in this country when bishops and priests are sifting through evidence of state capture while the (now former) head of the Hawks, Mthandazo Berning Ntlemeza, prays at a church service to get his job back. Such is the abnormality of South Africa that Ntlemeza’s predecessor Anwa Dramat was among those gathered at the iconic Regina Mundi Catholic Church in Soweto to hear the evidence that was presented by the SACC when he should have been the one heading the investigation into state capture.

Regina Mundi, which means “Queen of the World”, has seen a lot of activity during its lifespan. It was a place of meeting and a place of refuge during the liberation struggle, including the day of the Soweto uprising in 1976 when the police followed fleeing protesters into the church. They fired live ammunition in the church that day, damaging the marble altar and the statue of Christ. It was also a place of truth and pain when Truth and Reconciliation Commission hearings were held there from 1995 to 1998.

There were several people in the pews of the church on Thursday who would still be at their posts in government were it not for the shady network around President Jacob Zuma purging people who do not kowtow to the will of the Guptas. They include former Finance Minister Pravin Gordhan, former Deputy Finance Minister Mcebisi Jonas, former South African Revenue Service deputy commissioner Ivan Pillay and former government spokesman Themba Maseko.

They sat listening intently as SACC general secretary Bishop Malusi Mpumlwana detailed the evolution of the capture of the state, including the appointments in Cabinet and state-owned enterprises to enable the looting of the coffers.

“Government ministers acting in concert with private interests use regulatory instruments or policy decisions in an arbitrary manner to ‘shake down’ incumbent businesses – including black businesses – and favour particular interests. Instead of prioritising job creation and economic growth, decisions are taken for the benefit of a particular company, faction or group,” Mpumlwana said.

“The problem is bigger than corruption, it’s chaos.”

He ran through the movements and activities of “key players” in the network, such as ministers Malusi Gigaba, Lynne Brown and Mosebenzi Zwane, as well as orbiting Eskom CEO Brian Molefe, and how they served the Gupta empire. He also explained how former Finance Minister Nhlanhla Nene made a presentation to Cabinet on the unaffordability of the nuclear build programme and was then fired hours later. Mpumlwana also sketched how some of the Gupta companies were lined up to benefit from contracts from the state and state-owned enterprises.

“There is an untold amount of money that leaves South Africa. We don’t know the impact it has on the fiscus.”

The information was sourced from whistle-blowers and “terrified people” who were afraid to approach the authorities. The panel was set up in April last year and “offered a safe space” for people who wanted to relieve themselves of the burden of their experience of corruption.

“This was a pastoral process for the people, not an investigation,” Mpumlwana said. But he warned that South Africa was on the brink of becoming a “Mafia state” and that government had lost its “moral legitimacy”.

“We cannot unsee what we have seen.”

Asked whether he thought the president was corrupt, Mpumlwana responded: “Let’s just say the jury is out.”

The Unburdening Panel process can obviously not lead to criminal investigation and prosecution. The report will be handed to the ANC in the hope that the organisation will confront and deal with the crisis. But the SACC is to undertake its own process to create awareness of what is going on in the country.

The heads of all the churches that are members of the SACC have agreed to issue a pastoral letter across all congregations about the report on the Unburdening Panel. This will guide preaching, discussions and prayer in churches across South Africa. It is an unprecedented move in post-apartheid South Africa and it is happening now because the church leaders believe that government has lost its “moral barometer”.

The SACC might be doing this to create awareness, to discourage further corruption and to urge the ANC to self-correct. But the consequences of this process could have far-reaching consequences. Such damning evidence presented in the churches could alter perceptions and political loyalties.

A barrage of corruption exposés in the media is one thing – people consume what they want and sometimes forget what is reported. When it is dispensed from the pulpit, however, will have a captive audience that will not forget.

If the ANC missed the SACC presentation, it will have another opportunity to hear it. In fact, ANC Secretary-General Gwede Mantashe will be attending and addressing the two-day SACP national imbizo in Boksburg where the SACC has been invited to share the findings of its Unburdening Panel.

As awkward moments go, this could have top billing.

But then, Mantashe could have been the one receiving all that information handed to the SACC through the state capture investigation authorised by the ANC national executive committee (NEC). After receiving some of the bombshell revelations, the investigation was shut down in the next NEC by Zuma’s allies.

So the ANC essentially decided to bury its head in the sand and pretend the state capture contagion was not happening. It is not the only thing the ANC is avoiding. The ANC has been ducking calls, including from its stalwarts and veterans, for a frank discussion on its internal crisis and the situation in the country.

The SACP has therefore stepped up to host a consultative forum of political organisations, civil society groups and NGOs historically allied to the ANC. Over 300 delegates are expected at the imbizo, which will be addressed by, among others, SACP General Secretary Blade Nzimande, Mantashe and Cosatu president Sdumo Dlamini.

SACP second deputy general secretary Solly Mapaila told Daily Maverick that the imbizo was essential in the context of the “deepening crisis in our movement”.

“It is quite clear that recently the ANC abandoned that space of broad social mobilisation. We still require a movement that is broad in character. We need to revitalise the national democratic revolution, look at how to accelerate socio-economic transformation and reconnect with new realities,” Mapaila said.

“If the ANC is unable to fulfil its mandate and bring people together, the movement will completely disintegrate with no capacity to rebuild itself… At this imbizo, we want to reflect on the extent of the damage. The movement must protect itself. As progressive forces, we must reimagine ourselves, correct ourselves and find our bearings,” said Mapaila.

With the SACP leading the call for Zuma to step down from office, the issue is bound to come up at the imbizo. But Mapaila said Zuma was a “side issue” and the main focus would be “reconnecting with the people”.

“There is a contestation of moral values to lead society that the president doesn’t possess,” he said. If the ANC was able to cleanse itself of corruption and factionalism, and recommit to its values, the ANC could continue to play its historical leadership role, Mapaila said.

“We cannot be in alliance with a faction. We were joined to the value system of the ANC. That is what brought us together,” he said.

The deliberations at the imbizo are bound to set the tone for next weekend’s ANC NEC meeting and the Cosatu central committee meeting the following week. It is also obviously meant to impact on the discussions at the ANC policy conference and SACP national congress in July.

What is clear from the initiatives undertaken by the SACC and SACP is that the ANC is progressively surrendering its leadership role in society due to its internal paralysis and factional wars. While it is still the governing party, the national conversation is being driven by organisations that are stepping into the breach.