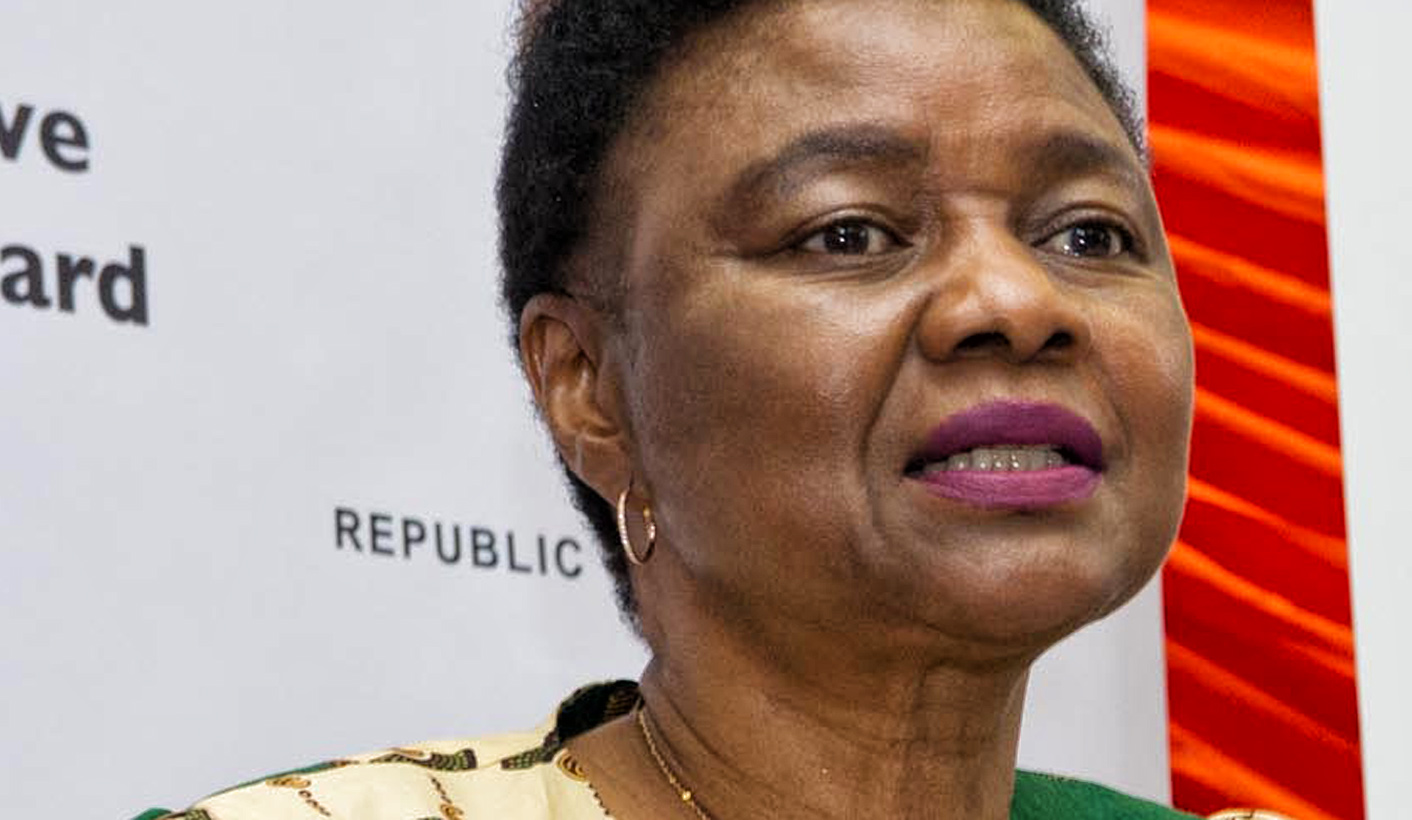 Home Affairs Minister Hlengiwe Mkhize emerged as an exception during the current round of budget votes in Parliament. On Wednesday she announced there would be a discussion document on repositioning her department as a security entity – the decision was taken by Cabinet last year and re-affirmed earlier this year – and that the department issued 498,000 more smart ID cards than planned, reaching a total of 6.8-million to date. It was a rare glimpse into government policy, programmes and initiatives among this year’s budget votes so far characterised by how little actually emerged. By MARIANNE MERTEN.

It’s early days yet as Wednesday was only day two of a two-week period crammed with up to six budget vote debates a day. But there is a clearly emerging trend from the ANC side of the House: a tribute to OR Tambo, the late ANC president who would have turned 100 this year, an emphasis on radical economic transformation or radical socio-economic transformation, and historical perspectives contrasting the better life of democratic South Africa against apartheid, while acknowledging the continued challenges of poverty, unemployment and inequality – and the need to do more.

From the other side of the House, opposition parties highlighted implementation delays, policy failures and the lack of ANC willingness to conduct oversight over party colleagues heading ministries and departments. There were words on the Gupta family, corruption charges and allegations against President Jacob Zuma and ministers’ peccadilloes, even if these had to be withdrawn as unparliamentary, like Tuesday’s statement by EFF MP Phillip Mhlongo regarding State Security Minister David Mahlobo’s predilection for manicures at a spa associated with someone reportedly linked to rhino poaching.

Throw in a good dollop of party politicking, usually by MPs, but on occasion a minister also stepped into the fray. In broad sweeps, the opposition slated the ANC as not up to the task while the ANC MPs took digs at the DA, the “devil’s advocate” representing white interests and unable to deal with racism in its own structures, and the EFF, which as newcomers didn’t really know a lot.

Well, that’s the extent of the debates so far of the 37 budget votes comprising South Africa’s R1.4-trillion Budget. Perhaps it’s not unsurprising. An argument might be made that Cabinet has been paralysed at least since November 2016 when, as it has emerged now, the first discussions regarding a reshuffle were held. The timeline of paralysis may well go back to December 2015, and the surprise sacking of then finance minister Nhlanhla Nene. Who would want to stick out their heads?

?Traditionally, budget votes have been the platform for ministers to tout their department’s achievements, indicate details in priorities for the coming year and set the tone for delivery. But 2017 is turning out to be nothing to brag about and nothing to look forward to.

In Tuesday’s Mineral Resources budget vote the minister, Mosebenzi Zwane, said the Mining Charter would be released “within weeks”, and prove to be “one of the most revolutionary tools ever seen on South African soil”. However, Zwane has talked of the publication of this revised charter since last year, even after the conclusion of a court hearing that ultimately upheld the once empowered, always empowered principle. This, the mineral resources minister said, would be dealt with in the new charter.

During Wednesday’s budget vote for the Department of Planning, Monitoring and Evaluation under Minister in in the Presidency, Jeff Radebe, much time was taken up when opposition parties complained that members of the National Youth Development Agency (NYDA) were giving them the middle finger – literally. The guests were cautioned about not participating in debates. Then Cope MP Deidre Carter was told to leave the House for refusing to withdraw her comment: “President Jacob Zuma is corrupt…”.

But at least Deputy Minister Buti Manamela took the opportunity, in the wake of a public spotlight on violence against women, to say: “As a leader amongst young people, I wish to unequivocally proclaim today that real men do not beat up women. Real men respect women…”

His comments came as the Department of Women in the Presidency finally released a statement on violence against women in the wake of the public outcry over the death of Karabo Mokoena, for which her boyfriend was arrested – and days after a Statistics SA survey that showed one in five women on average experienced physical violence. “We need to do more to intensify programmes that aim to prevent the abuse of women and children. We also need to do more to focus on boys and young men so that they become better members of our society tomorrow. We call on community leaders to engage with their communities to help prevent the abuse and violence against women and children 365 days of the year,” the statement said.

In the Correctional Services budget vote, Deputy Minister Thabang Makwetla gave a historical overview, including the brutal apartheid penal system, and the department’s commitment to strive but struggled to deliver much on other fronts, aside from recognising inmates and correctional officials for getting into the Guinness World Records for making the world’s biggest blanket. It wasn’t a cover-up.

“Despite various challenges, in response to the court order to reduce overcrowding at Pollsmoor Remand Detention Centre by at least 150%, an action plan, implemented in co-operation with the JCPS [Justice, Crime Prevention and Security Cabinet] cluster, saw the population reduced from 4,066 on 6 December 2016 to 2,570 on 8 May 2017,” said Makwetla.

But on occasion, the budget votes are used to ventilate topical political issues, as did the debate on the budget of the Office of the Chief Justice on judicial overreach. This prickly pear recently resurfaced amid a plethora of court cases, not only over appointments in the police, but also against Zuma’s recent midnight Cabinet reshuffle and the use of a secret ballot in Parliament’s motion of no confidence in the president.

During Wednesday’s debate the EFF defended turning to the courts, saying South Africa was a constitutional democracy whether one liked that or not.

Deputy Justice Minister John Jeffery said the courts have recognised the need to develop a distinctly South African view of the separation of powers. Reading newspaper reports from India and the United States, Jeffery said: “The debate around judicial overreach is an international issue.”

“Whichever way one argues it, our courts have proved themselves to be independent. We may not agree with every case. We may not always agree, but it cannot be said the ANC government has undermined the courts or the rule of law,” the deputy justice minister said. “Government has accepted and complied with court judgments, especially with respect to socio-economic cases, the main domain of judicial activism.”

The budget votes are unfolding until early June after a pressurised two weeks of committees ploughing through lengthy departmental annual performance and strategic plans. While Parliament went on recess for April, there is an unmoving deadline: the end of June, or the four-month statutory deadline from the tabling of the Budget to its adoption.

Questions arise over the quality of oversight, and perhaps this has flowed into the lacklustre budget debates. That is not to say there are no eloquent speeches, robust politicking, or insightful political commentary. It’s just all quite tepid and short on detail. DM