Why foreign investors choose Peru and not, erm, Uganda?

Why foreign investors choose Peru and not, erm, Uganda? 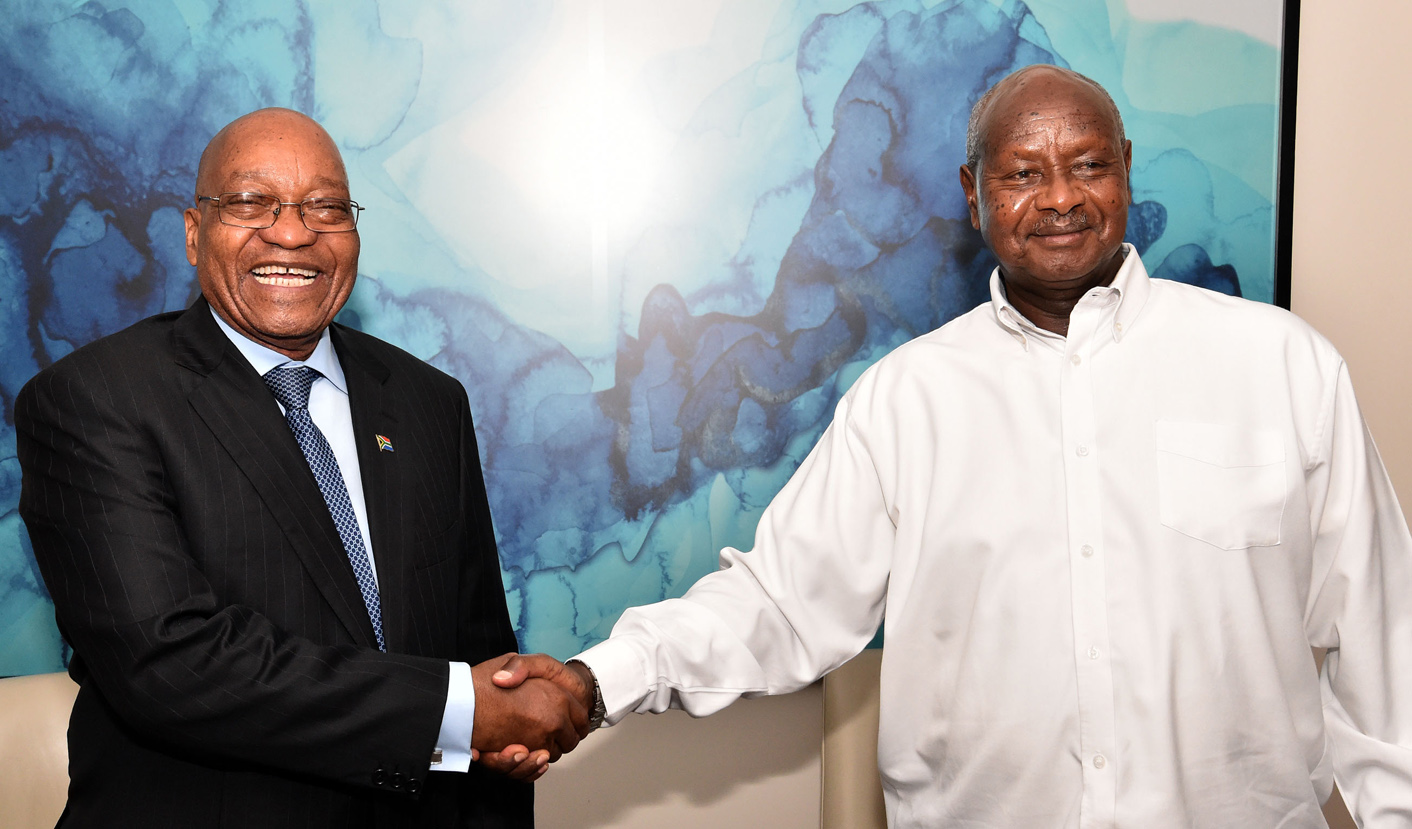 Why would investors seeking healthy returns and a stable environment choose Uganda over other locations around the world with similar potential? Latin America is equally blessed with a wealth of natural resources. They too have had their fair share of “colourful” leadership, but some countries have moved on, and for the better. By GREG MILLS and LYAL WHITE.

Yoweri Museveni, the President of Uganda, recently provided an insight into why his country will struggle to develop under his geritocracy.

“We have some of the highest grade iron ore in the world,” he explained to the audience at the Tana Forum held in Bahir Dar in April, “around 70% purity.” When the Indians told him that they would give Uganda $38 per tonne, compared to the $900 he claimed they would in turn receive for the ore, he told them, “It’s been in the ground for billions of years and can stay there for billions more.” He takes the same attitude on his oil reserves. Unless the price is right, he ain’t budging on getting it out of the ground.

Forgiving the irony given the way in which the Ugandans have “managed” the resources of the Congo next door, Museveni’s investor premise would be all very well and good if his terms reflected market realities. And the price he could expect would also be a reflection on whether the same products were available elsewhere cheaper and at less hassle. His level of bombast – and negotiating power – should also reflect his other development options apart from extractives.

In fact, for all the pretentiousness, Uganda is struggling to keep up.

Uganda’s population, which was seven-million at independence in 1962, is now touching 37-million and is projected by the UN to increase to over 100-million by 2050. With an annual population growth rate of over 4%, greater Kampala, already traffic-clogged, is expected to leap from 1.5-million now to over nine-million by 2050. Today 85% of Kampala households rely on pit latrines. Uganda’s per capita income is just $670.

Photo: Greater Kampala, already traffic-clogged, is expected to leap from 1.5-million now to over nine-million by 2050. (Photo by Lauren Parnell Marino via Flickr)

Museveni, who has been in power for 31 years, says better economic performance is down to ridding the country of “10 bottlenecks”. Good luck to them if he takes the same cranky view on these as he does on developing his natural resource options: that he, not the market, is right.

Sadly President Museveni is not alone. Given half a chance, African leadership is tempted by gesture politics, focused on historical injustice and sweeping unspecific fixes.

And it’s not that the rest of the world is waiting about to give Africa a chance.

Why would investors seeking healthy returns and a stable environment choose Uganda over other locations around the world with similar potential?

Latin America is equally blessed with a wealth of natural resources. They too have had their fair share of “colourful” leadership, but some countries have moved on, and for the better.

The Andean nation of Peru is just one example of how a country richly endowed with commodities put irresponsible leadership, divisive politics, internal armed conflict and mounting debt behind it. Instead, it chose to reap the benefits of its resource wealth through targeted reforms, making it a leading performer in the region for the past 15 years.

Peru’s annual economic growth averaged over 5% for 20 consecutive years starting in the mid-1990s. During that time, poverty more than halved – from nearly 60% to under 25% in 2015. Today Peru boasts some of the lowest levels of inflation, debt and unemployment in the region. The debt-to-GDP ratio in Peru is around 7%, compared to 40% in many neighbouring countries. This is in stark contrast to the debt-laden, conflict-strapped and politically volatile story of Peru in the 1980s, when per capita income was on a par with countries like Uganda.

Since reforms began in earnest at the turn of the millennium, Peru has attracted $80-billion in foreign direct investment. Over the same period Uganda received $10-billion. Today the average Peruvian is roughly 10 times as wealthy as the average Ugandan.

And yes, Peru’s recent economic burst can be attributed to high commodity prices and massive Chinese spending. But herein lies the kernel of Peru’s success. Institutions and reforms were implemented prior to the commodity boom, ensuring Peru could reap the full benefit of the price surge.

A rigorous programme of trade liberalisation and business friendly policies, including a complete overhaul of the mining sector in the early-2000s, helped boost investments and exports of copper and iron ore. Strengthening crucial institutions such as the tax authority and the regulatory regime have institutionalised reforms, encouraging economic diversity and deepening accountability.

The next wave of sectoral reform – following mining – is already under way in agriculture. This has spurred widespread innovation and has transformed a country of subsistence farmers known for its discovery of the potato into a globally competitive agribusiness. Peru is the world’s leading exporter of asparagus, the second largest exporter of avocados and a major producer of coffee, grapes and a wide range of other fruits and vegetables. Agricultural exports of Peru, a nation of 31-million, totalled nearly $6-billion in 2016. By comparison, Uganda’s agriculture exports, making up 80% of its total exports, were just $1.8-billion.

Examples of best practices in mining and agriculture or simply choosing the right path and doing things well are not only far afield in Latin America. Some are on our very own doorstep, in Africa itself.

Development demands sweating your assets; not sitting on them. For example, Ethiopia increased its tourist flows more than fourfold to over 800,000 visitors in the decade from 2004. With no beaches, its tourism has centred on heritage sights, such as the town of Lalibela in the northeast.

Lalibela is Africa’s Petra, with 11 Coptic churches hewn from sold rock within walking distance of each other. Declared a UNESCO World Heritage Site in 1978, the medieval churches are said to be a symbolic representation of Jerusalem.

Outside of the Ethiopian Christmas (when 70,000 pilgrims congregate in Lalibela), tourist numbers have steadily risen to around 50,000 annually today. Without this inflow the town, 650 kms from Addis Ababa, which has seen population numbers double to 35,000 since 2007, will struggle amidst conditions of biblical hardship. It has, in the words of one hotel proprietor, “nothing outside tourism” and the church itself.

Ethiopia is a long flight from rich markets, which remain fickle and subject to perceptions of security. Success demands not only super-duper attractions, but all of a hyper-efficient local airline, an abundance of good value accommodation, friendly locals and political stability.

Museveni earlier put Asia’s success and Africa’s comparative failure down to “discipline … the discipline of the Asians compared to the Africans”. This aspect however passes on the failure to the populace at large. The difference, too, between Asia and Africa has been in the commitment of leadership to popular welfare, and not simply to staying in power and enjoying the trappings. In those emerging economies which are successful, leadership has often taken on an iconoclastic character: for example, Lee Kuan Yew in Singapore; Chiang Kai-shek and Lee Teng-hui in Taiwan; Kim Dae Jung in South Korea; and Mahathir Mohammed in Malaysia. But the common thread among successful leaders has been realist pragmatism rather than idealism. In Africa, colonial paternalism has, in all too many cases, been replaced by autocracy – the African “big man” – which has not only been unrepresentative, but for the most part also intolerant, repressive and corrupt. It is the Asian commitment to popular welfare that has – even in the absence of democracy – offered political stability to its peoples.

Both Peru and Uganda suggest that, too, policy which pushes countries into a competitive market – and does not shield them from it – is usually best for their economy. The alternative is a sure recipe for widespread unemployment, personal desperation and political discontent. DM

Dr Mills heads the Brenthurst Foundation and is the co-author of Making Africa Work: A Handbook for Economic Success, which is being launched next month. Prof White heads the Centre for Dynamic Markets at GIBS.