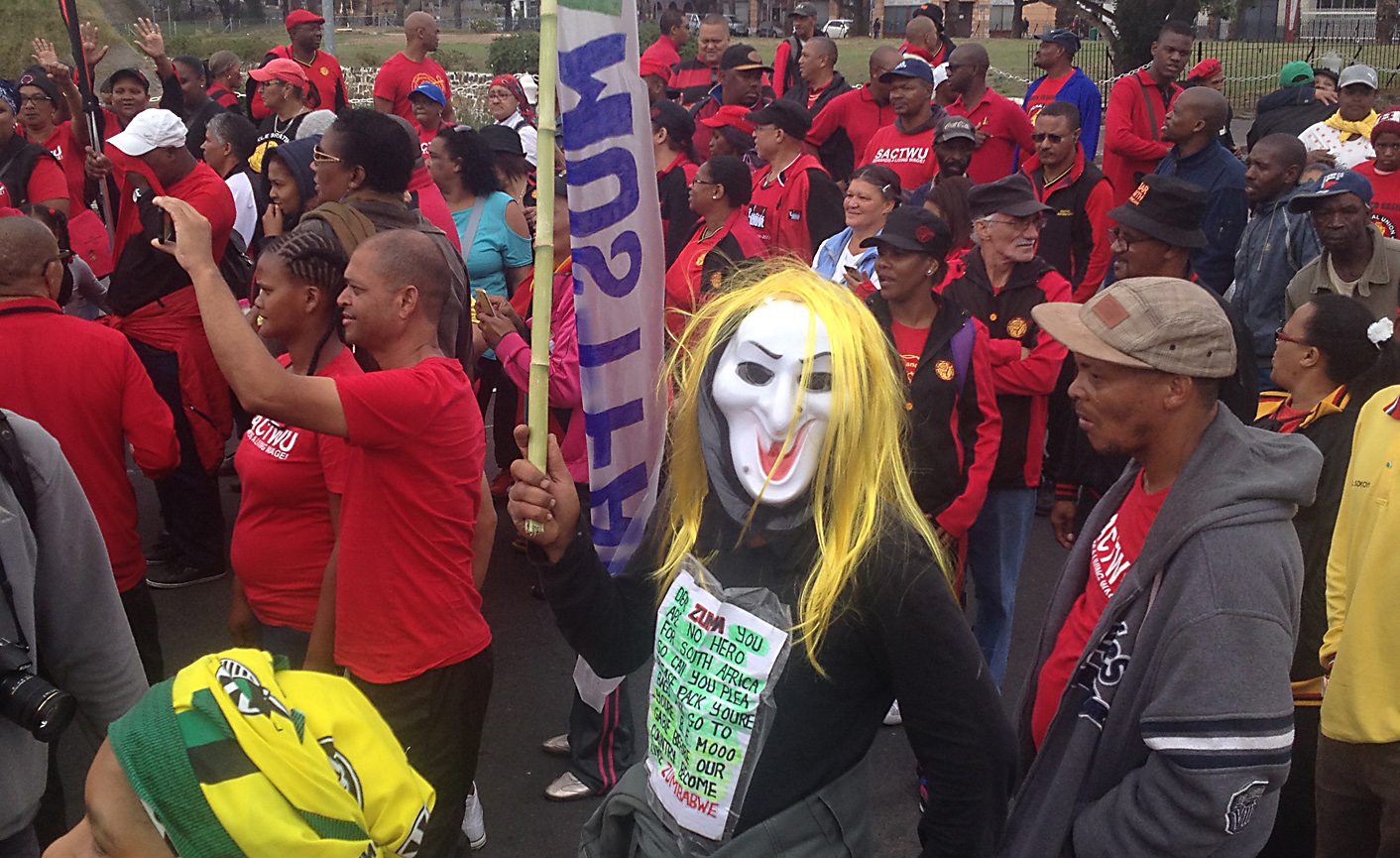 Workers’ Day is a public holiday won by the trade unions. To mark the occasion in 2017, Cosatu Western Cape went on a veritable postman’s round: delivering memoranda to business, the provincial legislature and national government. Amid the standard demands of workers, there was one new addition: Zuma must fall, and Cyril Ramaphosa must replace him. Just don’t ask Cosatu to march with anyone else to make that point. By REBECCA DAVIS.

“Dear Zuma You Are No Hero So Can You Pack Up Your Bags And Go To Your BF Moo-gabie Before Our Country Becomes Like Zimbabwe,” read a T-shirt worn at Cape Town’s Cosatu march on Workers’ Day. Its wearer stood out, because he was also adorned with a blonde wig and a ‘Scream’ mask. He also stood out due to the small numbers who attended the protest.

Thousands may have turned out to Cosatu rallies in Bloemfontein and Johannesburg on Workers’ Day, but in Cape Town proceedings took place on a far smaller scale. A crowd which numbered a few hundred at its peak was led by Western Cape Cosatu head Tony Ehrenreich and national treasurer Freda Oosthuysen to deliver demands to business and both local and national government.

Cosatu representatives reminded the crowd several times that it was the unions which had won the country this particular public holiday. The fruits of their toil were evident in the empty streets. Only business – in the form of the Cape Chamber of Commerce and Industry – had bothered to dispatch a representative to receive Cosatu’s demands. At the Western Cape provincial legislature and at Parliament, the same policeman had to sign for memoranda.

It was outside the Cape Chamber of Commerce and Industry that the march made its first stop. There, Ehrenreich explained that the memorandum being handed over “really goes to the whole of business across the country”. He accused South Africa’s corporate sector of having “always opposed transformation”, having opposed the concept of a living wage, and having supported the deregulation of the labour market.

Ehrenreich also had criticism for business leaders who marched against President Jacob Zuma but stayed silent on the issue of corporate collusion. “We must be clear that any corruption is bad!” Ehrenreich thundered.

Executive Director of Cape Chamber of Commerce Sid Peimer told the crowd that the memo would be given “due consideration”, and added: “What’s good for you is good for business.”

On with the march! Next stop: the Western Cape Provincial Legislature, which Ehrenreich described as housing “the biggest racist in Cape Town”. He meant Western Cape Premier Helen Zille, who is one of two Z-surnamed leaders that Cosatu wants to see axed. At the provincial legislature, a handful of people wearing blue DA T-shirts joined the protest.

“DA people are also here to say there’s a problem with the racism in the DA!” Ehrenreich said. He expressed concern with the allocation of resources within the Western Cape, particularly in terms of education. He also accused both Zille and Mayor Patricia de Lille of staying silent about corporate collusion because “they [corrupt business leaders] fund your election campaigns”. Zille, he alleged, keeps white people off the organograms of senior government but sneaks them in as consultants.

“This is your final written warning,” Ehrenreich instructed an absent Zille, before threatening – not for the first time – to drag her out of her offices.

But it was at the seat of Parliament that Cosatu issued its biggest leadership ultimatum, to President Jacob Zuma. “We have arrived to come and tell our President that as workers we no more see him as our leader,” Cosatu Western Cape chairman Motlatsi Tsubane said. “We have put him there and […] as workers we no longer see any leadership there.”

Representing the South African Communist Party, Adrian Williams added his voice to the chorus calling for Zuma’s resignation. But Williams, a Member of Parliament in the National Assembly, had bad news for anyone hoping for his vote against Zuma in the upcoming Motion of No Confidence.

Williams said that he could never support such a motion raised by a party, the DA, whose former leader – Zille – is “an outspoken defender of colonialism”.

Williams also said that amid the furore around Zille’s colonialism tweets, insufficient attention had been paid to the fact that British colonialism was not only disastrous for black people, but also Afrikaners, who were herded into concentration camps in their thousands.

“Helen Zille must please explain to the Afrikaans people why she supports the murder of their children,” Williams said.

Cosatu’s national treasurer Freda Oosthuysen said that the trade unions had decided on a simple message for President Jacob Zuma.

“We did not mumble rumble,” Oosthuysen said. “We just said: ‘Bru, step aside. We think it’s time for you to rest a little’.” On the topic of Zuma’s successor, Oosthuysen was equally straightforward.

Nearby, one Cosatu supporter dissented. “We want a coloured president now!” she yelled. “No more Africans! No more whites!”

The rest of the crowd, however, greeted the mention of Ramaphosa with resounding applause.

Confusion had earlier reigned over whether the ANC had dispatched a bigwig to address the protest, or not. ANC Treasurer-General Zweli Mkhize had originally been slated to meet protesters at Parliament. Eventually it emerged that he would indeed appear, but at the march starting point of Cape Town’s Castle. Cosatu supporters dutifully retraced their steps to receive Mkhize, who, as a potential deputy president himself, received a warm but not rapturous reception.

Mkhize was circumspect on the topic of Zuma’s resignation, suggesting that it was a topic for discussion “in the platforms of the alliance structures”. His message was, instead, a call for unity: the ANC’s ability to run the country, Mkhize said, was “undermined by our divisions”. Factionalism between the ruling party and its alliance partners must end, he warned.

But if the events elsewhere in the country on the same day revealed anything, it was how distant a prospect unity in the ruling alliance remains while President Jacob Zuma retains power. DM