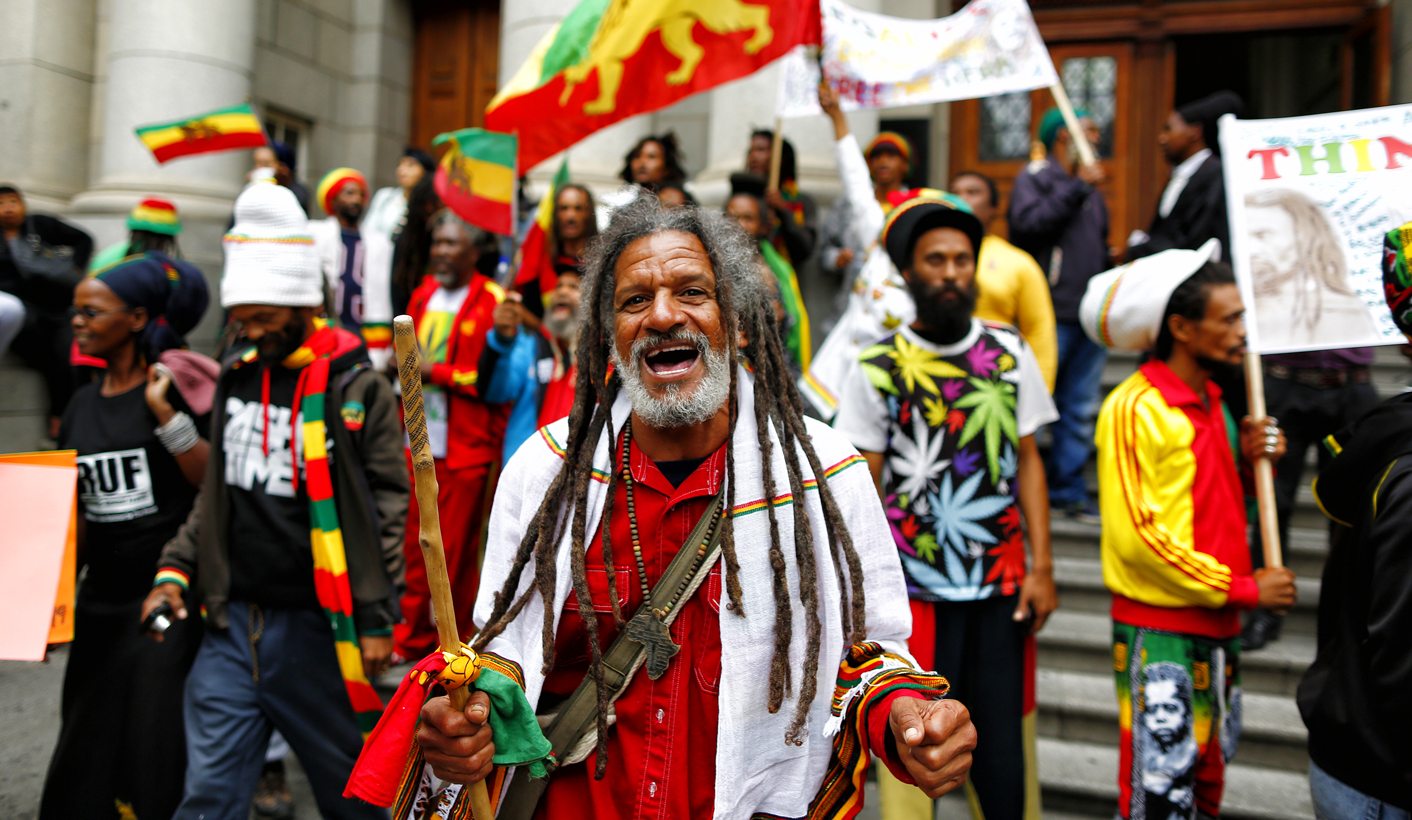 For the entire day on Friday March 31, across all platforms, the news was not just the news but an evocation of the divine – down in the dark parts, the eating of the South African state by the shameless demons of Hell; up in the light, the de facto legalisation of the most politically astute plant in history. Was the timing a coincidence? By KEVIN BLOOM.

To begin, a statement of intent regarding the remarkable events of Friday March 31, 2017: the only difference between an “irony” and a “synchronicity” is in how much significance we are willing to ascribe to the connecting principle.

If, for instance, we think it’s “funny” or “weird” that President Jacob Zuma completed his state capture programme within 12 hours of cannabis being effectively legalised for home use in South Africa, we are in the category of the ironic. To be precise, what we are talking about here is “situational irony”, which is the most common type, and which refers to the difference between what we expect to happen and what actually happens in a given situation. In other words, just like rain on our wedding day is ironic (thank you, Ms Morissette) because a wedding is supposed to be the quintessential happy day, cannabis legalisation on the first morning of Malusi Gigaba’s tenure as finance minister is ironic because that’s supposed to be the quintessential shitty day.

On the other hand, if we think it’s more than funny or weird that these two events – i.e., Malusi and the dagga – occurred within the same temporal window, if we ascribe to them a meaning beyond the merely “coincidental”, we have entered the realm of the synchronous. “We often dream about people from whom we receive a letter by the next post,” wrote CG Jung in Synchronicity: An Acausal Connecting Principle. “I have ascertained on several occasions that at the moment when the dream occurred the letter was already lying in the post-office of the addressee.”

In this supra-mundane spirit, then, I would like to tell the reader about a message that arrived in my inbox on Friday March 24. The message came in the form of a photograph, an image of a dining table around which eight people were seated – four of the eight included Ahmed “Uncle Kathy” Kathrada, his life partner Barbara Hogan, myself, and an old friend of mine who I’ll just call “M”. On opening the e-mail, I was reminded of the conversation that took place over lunch that day in late summer 2015.

Barbara Hogan, I remembered, had been explaining to us how, when Uncle Kathy was released from prison after almost three decades inside, the external world appeared to him chaotic, unfathomable, loud. Some days, she said, he wanted to return to his cell, just to relive the silence. She also explained how Nelson Mandela, in the first few months following his own release, had suffered from the same yearning – he too longed to return to his cell “to think”, she said.

Then I moved on to the next message and forgot about the photograph.

Four days later, Uncle Kathy died. Tuesday March 28 was also the day on which M’s wife posted a request for help on Facebook. M had sunk into a suicidal depression, and his wife was asking her social media community to donate money to a crowd-funding campaign that would pay for a radical and expensive treatment. “[M] is an incredible human being,” the plea read, “he has dedicated his life to helping others, training and working as a psycho-analyst, advocating for the legalisation of medical marijuana and working with the terminally ill.”

It was all true. But what the plea did not explain was the lengths to which M was willing to go when he felt called upon to shepherd a dying person from this world to the next. It also didn’t explain why he had become a marijuana activist: the reason, I knew, was that his son suffered from Dravet Syndrome, an extreme form of epilepsy. Medical marijuana was the only treatment that kept the fits at bay, allowing M’s son a quality of life that mainstream Western medicine hadn’t come close to providing. After many years of using the treatment illegally in South Africa, M and his wife had left for the USA in 2016, settling in a state where they could care for the boy without fear of getting arrested.

“This experience punctured the desired hole in her rationalism and broke the ice of her intellectual resistance,” wrote Jung in Synchronicity: An Acausal Connecting Principle – and last week, the same could easily have been said of me. By the time Friday rolled around, I was primed. For the entire day, across all platforms, the news was not just the news but an evocation of the divine – down in the dark parts, the eating of the South African state by the shameless demons of Hell; up in the light, the de facto legalisation of a plant that had been criminalised in the 1880s with words such as these (from the Natal Indian Immigrants Commission Report of 1887):

“As we are strongly convinced that the smoking of hemp is as baneful to the K***** as to the Indian, we consider it is our duty to suggest that chemists, holding special licences subject to stamp duty, should be the only persons allowed by law to sell any portion of the hemp plant, whether wild or cultivated, to any person whomsoever, whether of white, K*****, or Indian descent.”

Meaning, the criminalisation of dagga in South Africa was hitched from the start to the white man’s need to control, subdue and demonise his non-white brother. Also meaning, the lesson of Uncle Kathy held true: silence, virtue, the ability to endure beyond the noise… these were the things that could (and would) win in the final reckoning.

Which is not to say that dagga doesn’t bite. Local writer and publisher Melinda Ferguson was bang on the money when she posted this on her Facebook timeline on Saturday April 1: “Since getting clean 17 years ago some of the hardest to treat addicts I have come across are those addicted to dagga. Layers and layers of denial… operating on half a cylinder… dissociated… emotionally distant… yip… and more… Unless you use it with the utmost respect – as a teacher plant – or medicinally – which most people don’t – misuse can cause havoc.”

Neither is it to say that dagga is definitely going to be legalised in South Africa: in the judgment handed down in the Western Cape High Court last Friday by Judge Dennis Davis and his fellow judges Nolwazi Boqwana and Vincent Saldanha, the first step is for the Constitutional Court to confirm the finding. After that, Parliament has two years to correct the law so that the right to privacy of an adult South African in his/her home is not infringed upon (this right, the judges deemed, may be used as a defence by those charged with the possession, use or cultivation of dagga in their own home).

What it is to say, however, is that a plant that has powerful healing properties in the context of diseases from leukemia to epilepsy, a plant that grows like wildfire in this country and can bring billions to the formal economy, a plant that has applications in building materials and clothing lines and pain reduction and frail care, is finally making it’s political presence felt in South Africa.

And its political message is a rare one – peace, love, respect, the dagga says to us, these are the principles that will teach us how not to poison our country, our planet, our home. DM