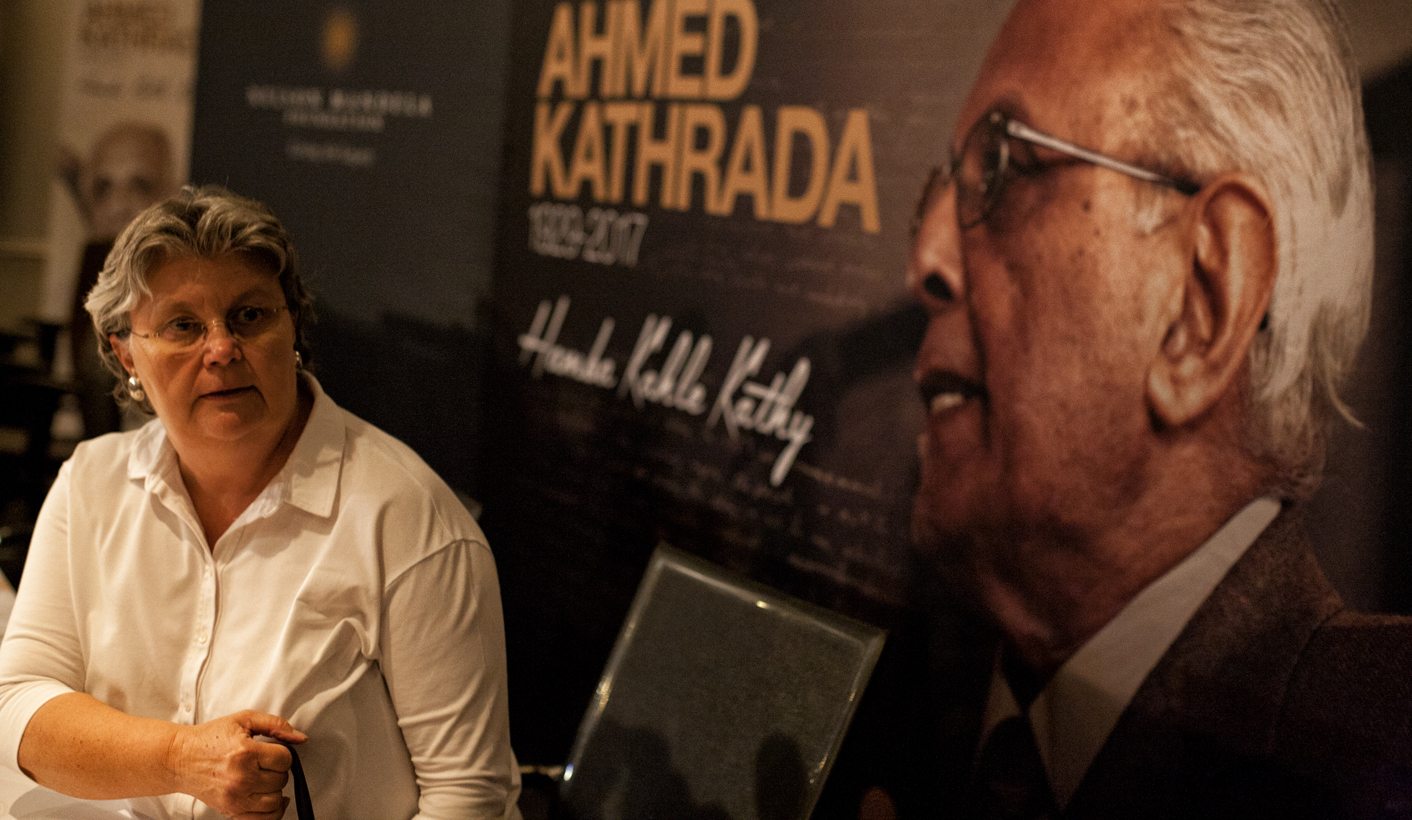 Struggle icon Ahmed Kathrada died on Tuesday. On Friday, the presidency said his national memorial service was “postponed”. If President Jacob Zuma was trying to deflect criticism after his cabinet reshuffle, it’s not working. By GREG NICOLSON.

The Ahmed Kathrada and Nelson Mandela Foundations slammed President Jacob Zuma on Friday following the presidency’s decision to postpone the state memorial for late struggle icon Ahmed Kathrada. In a Johannesburg press conference, Kathrada’s wife, Barbara Hogan called on Members of Parliament (MPs) to recall Zuma and on society to rally to protect institutions of democracy from corruption.

Kathrada passed away on Tuesday morning and the 87-year-old’s funeral was a defining moment in the fight against Zuma, with leaders such as former President Kgalema Motlanthe rallying against the president, who was encouraged not to attend.

“I felt that myself and the Kathrada family that when ‘Mr K’ was buried on Wednesday it was one of the most fitting tributes in the style and tradition of our mass democratic movement,” said Hogan on Friday. The presidency announced that a national memorial service would be held in Soweto on Saturday, which the family thought would be a fitting tribute to the man imprisoned by the apartheid state for 26 years.

But when Zuma announced a wholesale cabinet reshuffle on Thursday night, the family had second thoughts. Finance Minister Pravin Gordhan and his deputy, Mcebisi Jonas were both fired in what has been criticised as a raid on the Treasury meant to enrich Zuma loyalists and his allies, the Gupta family. The presidency on Friday said the memorial would be postponed. It didn’t explain why and did not communicate the decision with Hogan, the Kathrada family or the Ahmed Kathrada Foundation.

“If this is not a defining moment in our history, nothing will be a defining moment,” said Hogan, speaking at the Nelson Mandela Foundation. She said the memorial was likely cancelled. The presidency offered no future date for the event.

ANC veteran Laloo Chiba, who spent 18-years on Robben Island and was a close friend of Kathrada’s, said: “We were rather shocked and disappointed at the manner in which the statement was made by the presidency. The least they could have done was to consult Barbara Hogan, consult the Kathrada family and consult the CEO of the Ahmed Kathrada Foundation, or at least inform them.”

The foundation will hold its own memorial service with the South African Communist Party at the Johannesburg City Hall at 2pm on Saturday. Gordhan will speak. Deputy President Cyril Ramaphosa, the keynote speaker for the postponed event, had not yet been invited but officials said he would be welcome to attend.

Kathrada has been remembered for his relentless commitment to his values. A year ago on Friday, he wrote to Zuma after the president was slammed by the Constitutional Court regarding upgrades to his Nkandla home. “I know that if I was in the president’s shoes, I would step down with immediate effect,” he wrote.

Daily Maverick couldn’t reach the presidency but it’s likely the memorial was cancelled so Zuma could avoid further public attack from prominent leaders.

Hogan, who served as a cabinet minister, said Zuma’s reshuffle showed he was inept, failed to apply his mind to crucial decisions, and was losing the support of his own party, the ANC. “Could they have not held off with their dastardly deeds?” she asked, noting Kathrada’s recent death. “This is the low down character of the people running our institutions at the moment.”

“I was incredibly angry,” she said of the cabinet reshuffle. “If this was a presidency that was listening to the sentiments in this country, the funeral service of Mr Kathrada alone would have alerted them to the high emotions and feelings in this country.” She said Zuma was acting out of selfish interest, again noting “dastardly deeds” done in “dark corners”.

“We did not fight for that. We will not stand for that.”

The Ahmed Kathrada Foundation and Nelson Mandela Foundation said ministers and ANC leaders need to call for the president to step down.

Hogan, holding a copy of the Constitution, said: “We have to form a broad mass democratic alliance to take on the forces of evil and the rogues and the thieves who want to steal our country before us. No one can remain silent; it’s time to take back the country.”

From her experience in parliament, she said it’s the right time for ANC leaders to take on the president. They have been repeatedly humiliated. “This is what makes it so absolutely different from previous times. In politics you often have to swallow what you don’t like… But there comes a point in time that you no longer can stay silent. You no longer can look your children in the face and say I am a decent human being.”

Nelson Mandela Foundation CEO Sello Hatang said it’s not about individuals but South Africans standing up to abuse. The foundation will meet the presidency this week. Hatang said the continued crises limit the future of the country’s youth and create more people who have nothing to lose.

Ahmed Kathrada Foundation CEO Neeshan Balton said his organisation will support protests against the president and will canvas ANC MPs to convince them to support a motion of no confidence in Parliament.

Former National Assembly speaker Max Sisulu, who has known Zuma for years, appeared emotional at the press briefing. “You never know what happened because people change, but we hope he will go back to the Zuma we know.”

Regarding the key question of what MPs and ministers who disagree with the president’s actions should do, Hogan said they should not resign. They would be replaced with sycophants who do not question what they are told to do. DM